As Jetstar Hong Kong prepares to launch, Hong Kong Airlines weighs transforming Hong Kong Express into an LCC, Spring Airlines moots a Hong Kong base and other LCCs evaluate Hong Kong as a hub, the market has been left wondering about Cathay Pacific's response. Cathay and its Dragonair subsidiary account for about half of Hong Kong's capacity.

Cathay effectively has no public response. While deep down it is watching the market and undoubtedly weighing possible reactions, from a business perspective it says LCCs will not impact its business while to the general public its push has been to offer a limited number of discounted web-only tickets, "Fanfares", as a reminder that it can offer fares on par with LCCs.

Any airline can cut fares, but few can do so profitably. Fanfares account for less than 1% of seats, relatively isolating Cathay from any pricing detriments, but reminding the carrier this is no response to LCCs either taking existing traffic or creating new demand Cathay will be unable to tap. Structural change is needed.

Cathay sees 80% take-up of Fanfares, which comprise less than 1% of capacity

Cathay in 2012 launched a promotion called "Fanfares" in which a limited number of return economy class tickets are put on sale on Cathay's website (on a dedicated page) every Tuesday morning for flights from Hong Kong (and not to Hong Kong). Eleven short- and long-haul destinations from Cathay and wholly-owned regional subsidiary Dragonair are included and tickets for imminent travel as well as two months or so in advance are available. The general thrust is to clear inventory that would otherwise go out empty while getting exposure for the Hong Kong market.

See related article: Cathay Pacific and Dragonair experiment with fare offerings, but is structural change in the wings?

Generally short-haul destinations are for travel closer to the booking date. Some offers have fixed departure and arrival days while others allow passengers to choose. Not all sectors on a day will have Fanfare seats available.

There are typically 100 to 200 return tickets available for each destination, but Busan has seen only 40 tickets be made available, Jeju 60 and Perth/Rome/Yangon 90. Some cities will go up to 250 tickets.

Very short-haul return flights can be priced around HKD490 (USD60) excluding taxes while long-haul can be at HKD3,490 (USD449). Fanfares to cities seeing LCC competition (such as Bangkok, Singapore and Tokyo) can offer prices lower than LCCs, but only for limited tickets.

Fanfares typically do not earn loyalty miles or points aside from a booking bonus. Cathay, and many airlines globally, would be wise to adjust earning (and redemption) rates up across the board so every revenue fare earns credit and an incentive to book with the airline.

Since early Jan-2013 the average Fanfares offering has been about 1,770 tickets, according to CAPA data. Cathay says about 80% of tickets are sold. Some, mainly inexpensive short-haul destinations, sell within two hours. Some fares are only available for a few days while others for a week.

The return seats comprise less than 1% of Cathay and Dragonair's combined capacity. Exact comparisons are difficult as each Fanfare is for sale over various and different weeks from other Fanfares. 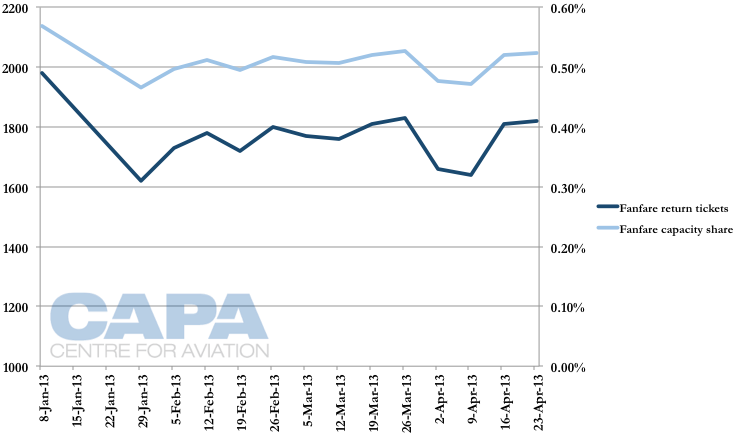 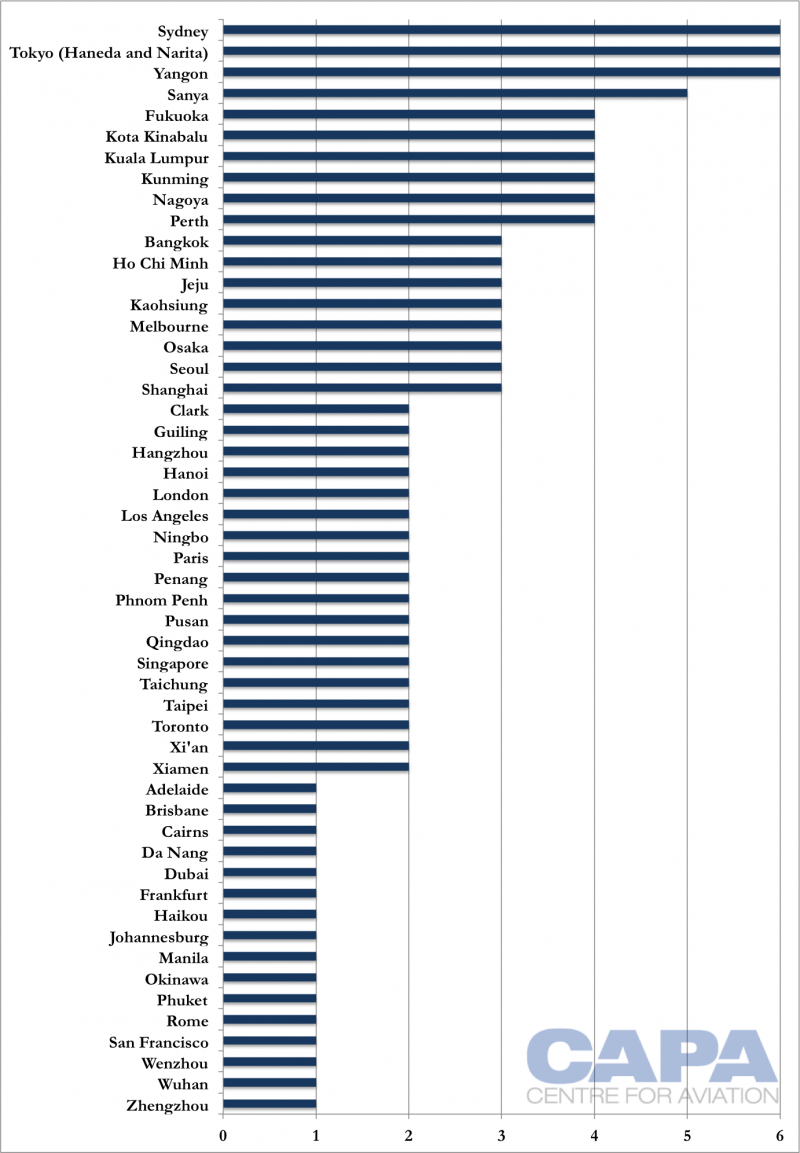 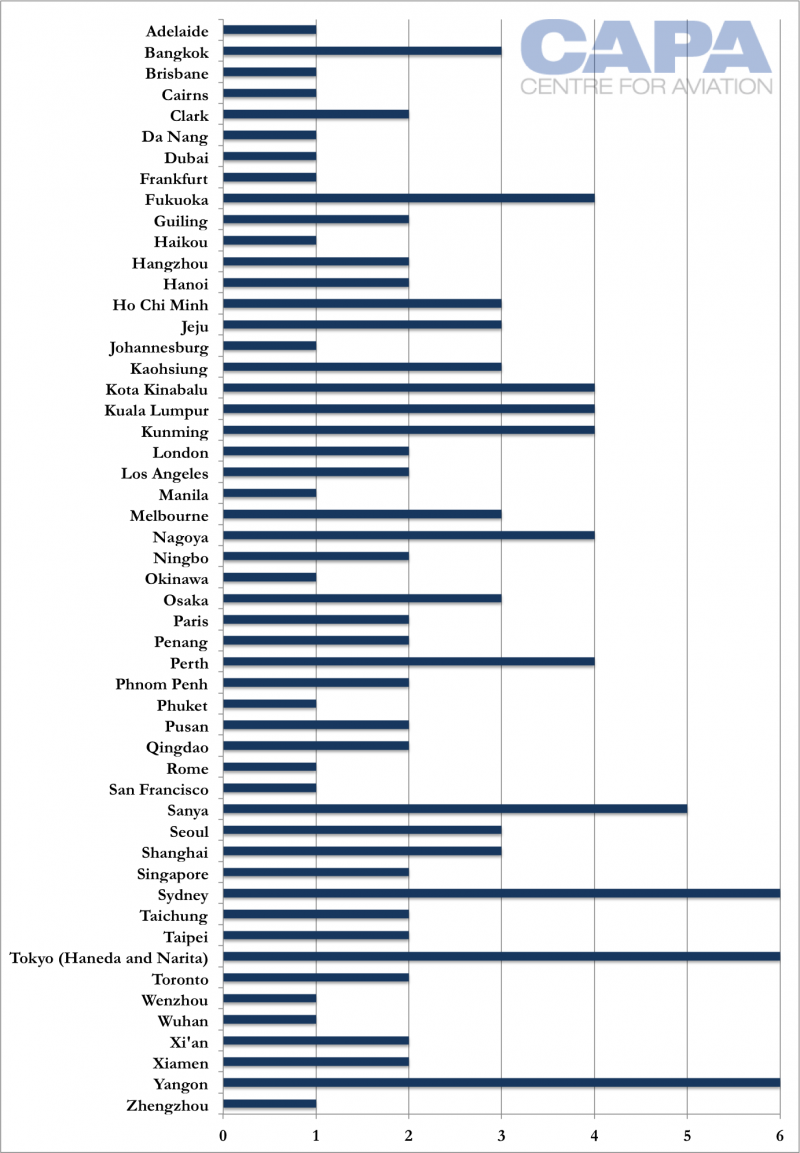 Cathay's intentions are vague, but undoubtedly LCCs are on its mind

Cathay has never been explicit on its intention for Fanfares except to offer better prices to its local Hong Kong market. The carrier is also keen to drive website traffic, and issued a press release on 22-Apr-2013 when the Fanfare site surpassed three million views.

The Hong Kong market has generally lamented its "hub-captive" status that sees it pay more than if, for example, it started a journey in mainland China, greatly reducing the ticket price. Pressure is also on Cathay to respond to the growing presence of LCCs in North Asia and Hong Kong specifically with Jetstar Hong Kong to launch, Spring Airlines expanding (and weighing a Hong Kong base) and Hong Kong Airlines considering whether to transform Hong Kong Express into an LCC, which it first announced it would do in late 2011.

Cathay is adamant that its business will see no increased competition from LCCs and the carrier likes to say it has competed with LCCs for nearly a decade. While the latter is true, the rate of LCC competition will increase.

As Hong Kong gains locally based carriers, the offering changes and competition increases. Jetstar Asia, for example, has only a mid-morning service to Singapore as its earliest flight from Hong Kong as the aircraft flies in from Singapore that morning. The existence of Jetstar Hong Kong could enable an early morning service (Jetstar brands can all be booked interchangeably on its website).

Spring Airlines is limited to having its first departure from Hong Kong to Shanghai not until early afternoon as the aircraft arrives from Shanghai. The lack of frequency and absence during certain parts of the day is a hindrance.

Even ignoring detriments to Cathay's existing business, LCCs have proven globally their ability to support new markets that full-service carriers cannot owing to cost differentiation. At the very least, Cathay is giving up a growth segment.

Cathay is likely waiting to see how LCCs develop before proceeding further. The carrier has a long history of believing LCCs would not take foot in Asia – which they have, as any number of recent aircraft orders attest to – so Cathay would find it difficult to walk away from that position unless it has a solid plan.

Cathay's language implies that Fanfares can meet the Hong Kong public's need for low-fare flights. A saccharine statement describes Fanfares as "one of the most exciting promotions ever to hit the city" and that Fanfares "has become the talk of the town". While Fanfares may generate buzz, it is far from when LCCs offer seats for trivial prices or just taxes.

While Cathay with Fanfares is offering lower prices, it is doing nothing to its cost base, aside from distribution fees. The fares are also highly limited in number, destination and availability whereas an LCC has far wider availability every day. (Some complain Fanfares go on sale at 08:00 as people start work or are en route to work. By the time they are free to book fares, many are gone.)

This is not to say Fanfares is an unwise venture. It is gaining Cathay direct distribution exposure and further insights into its market. But as anything near a solution to encroaching LCCs in Hong Kong, it is far away.

Frequency of cities is mixture of high-volume and new destinations

Fanfares' destinations fit into a few categories. There are Cathay and Dragonair's largest destinations based on seat capacity.

Of the top 10 destinations for Cathay and Dragonair combined, five (Shanghai, Bangkok, Tokyo, Kaohsiung and Seoul) have featured in Fanfares three weeks or more since early Jan-2013. The volume nature of those routes makes it easy to find a relatively few seats for the discounted fares. Another four cities (Kuala Lumpur, Sydney, Osaka and Ho Chi Minh) from Cathay's 11th through 20th largest destinations have been featured three times or more since Jan-2013. 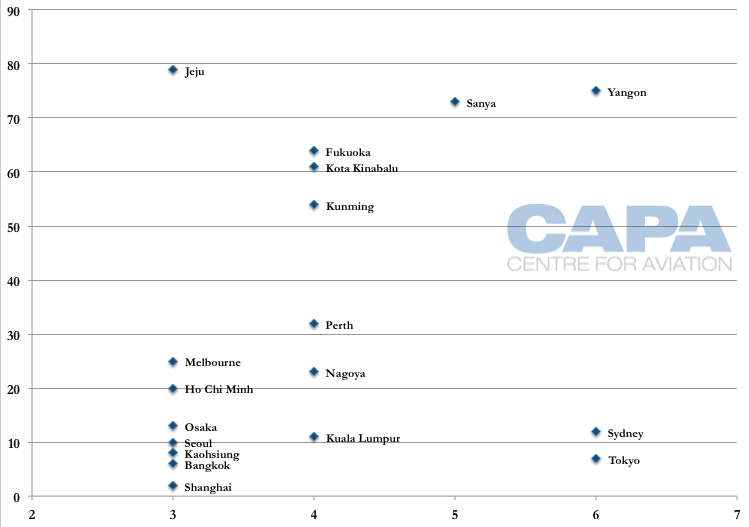 Only Tokyo (seventh largest) and Sydney (12th largest) join that grouping. Dragonair since 2012 has been on a growth spurt, opening up about a dozen destinations, and some of those (like Zhengzhou, primarily a manufacturing city in central China) have been featured in Fanfares but with lower frequency.

Cathay is undoubtedly continuing to experiment with offerings, but cities that either see increased competition or declines/stagnation in demand are promoted. Malaysia's Kota Kinabalu in Sabah (Borneo) is seeing 61% capacity growth in 2013 compared to 2012. It has been featured in Fanfares four times since early Jan-2013.

Frequency of Fanfares plotted against system seat capacity change: 2013 vs 2012 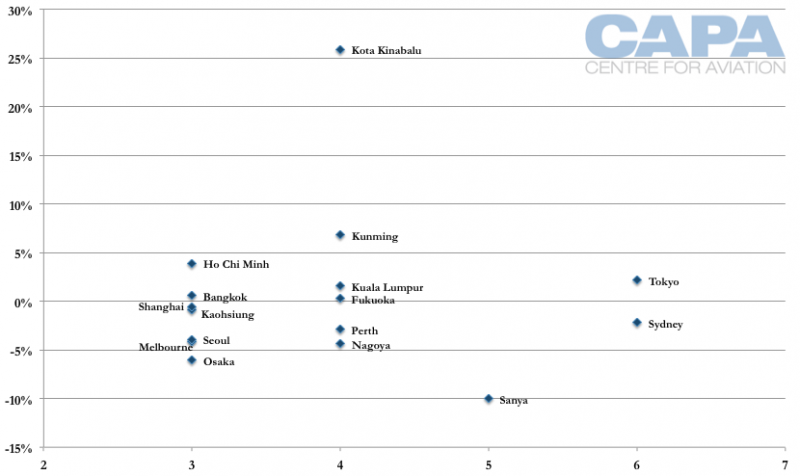 Frequency of Fanfares plotted against Cathay Pacific and Dragonair seat capacity change: 2013 vs 2012 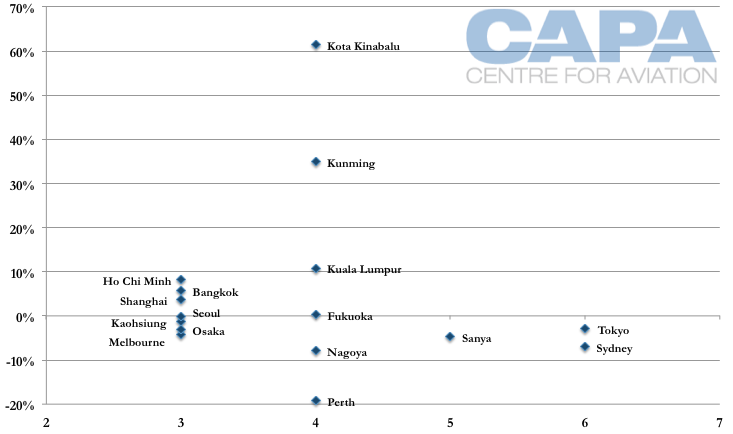 Other cities have nuances, such as Australian points seeing increased competition from Asian carriers (including China Southern, Scoot and Singapore Airlines) as well as traffic between Hong Kong and Japan having been affected by territorial disputes.

Fanfares is a worthwhile offering, but bolder strategic moves are needed

Fanfares has a deserved place in Cathay, but so too do a number of possible strategic moves, especially with Cathay ending 2012 with its airlines posting an operational loss. Those strategic moves range from developing an LCC, to closer integration with partners, within or outside Cathay's oneworld alliance.

Whereas Cathay and Singapore Airlines were once fiercely independent, SIA has warmed up to LCCs and to some extent partnerships, leaving Cathay relatively isolated. A small but notable alliance with Air New Zealand is hopefully the sign of more to come.