As LATAM Airlines Group aims to exit Chapter 11 bankruptcy protection by the end of 2021 the company believes it will be well positioned, and sees opportunities in some of its key markets, including Colombia and Brazil.

Yet even as LATAM remains confident in its prospects after completing its restructuring, there are challenges for airlines in the short term as a patchwork of travel restrictions remains in place. And the company is stressing that governments will play a key role on the path of Latin America’s recovery.

It was not an easy decision for LATAM Airlines Group to seek Chapter 11 bankruptcy protection in May-2020.

But LATAM company CEO Roberto Alvo, at the recent CAPA Live March conference, said: “As I see it now, definitely for the company this is going to be a great opportunity”.

Then he added: ”The restructuring will allow us to be leaner, much more efficient[,] and we will have a stronger balance sheet than the one we had when we entered the process.”

During its restructuring LATAM has had to make tough decisions, including shuttering domestic operations in Argentina – a country where it was the second largest operator in 2019 measured by domestic passenger share.

But LATAM sees no shortage of opportunity in the region, and Mr Alvo highlighted that Colombia was a great opportunity for the company. Before the pandemic, LATAM was making a push in the country, particularly among business travellers.

In 2019 LATAM aimed to double its domestic capacity in Colombia in a three-year period, as the company’s management believed it had identified an opportunity of “becoming a real alternative to the domestic business traveler in Colombia”.

LATAM Airlines Colombia has long been the country’s second largest airline, and remains second behind Avianca (which is also in Chapter 11) measured by seat deployment.

Colombia: system seats by airline, as of mid Mar-2020 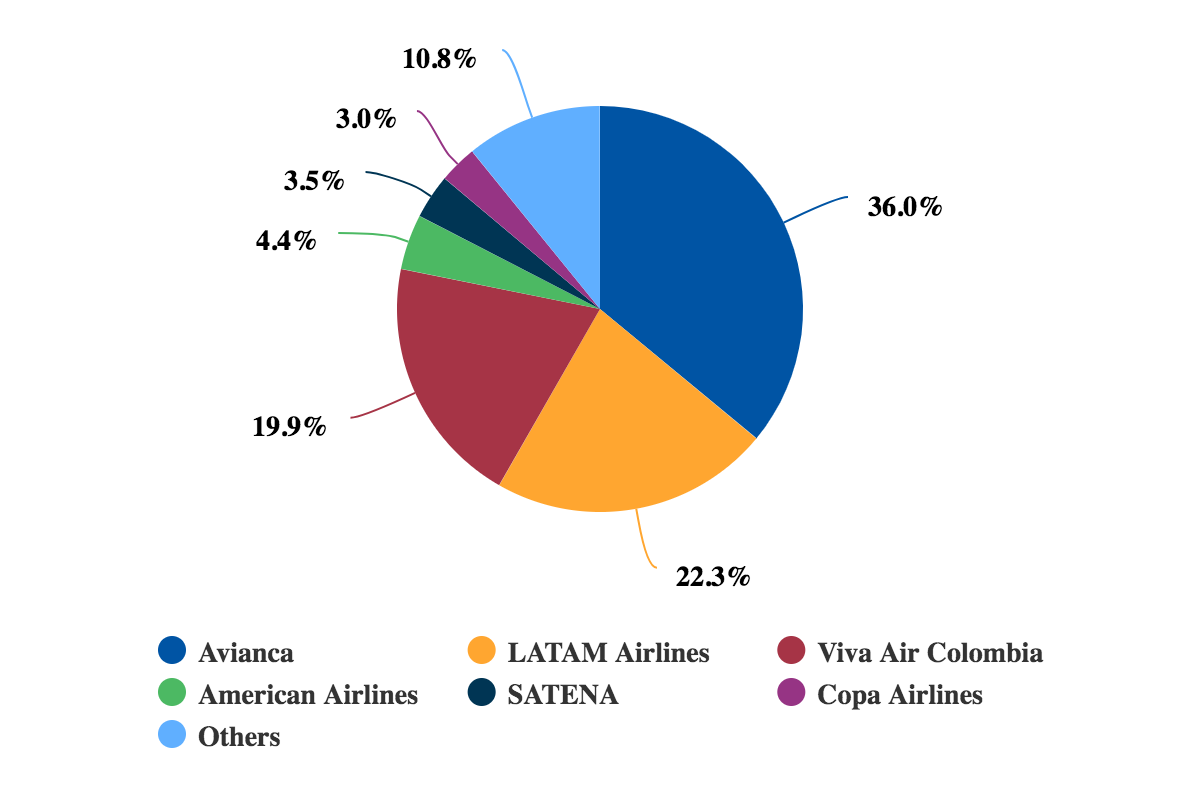 Mr Alvo said that the Colombian market was a “great opportunity” for LATAM.  “We have come to a very, very solid cost position. I believe that we can be extremely competitive in our cost, even with low cost carriers”, he said.

Those airlines join the Colombian low cost operator Viva Air Colombia, which launched operations in 2012 and has become a formidable competitor in the market. It had a 12.4% domestic share in 2019 and carried 3.3 million passengers.

Previously, Viva Air Colombia has concluded that the Chapter 11 reorganisations undertaken by those two airlines have also created opportunities for Viva Air to explore new markets and stimulate demand with low fares.

Through the 2012 merger of LAN Chile with (Brazil's) TAM Airlines, Brazil is now LATAM’s largest domestic market, and before the COVID-19 crisis LATAM Airlines Brazil was the second largest airline measured by passengers carried, behind GOL.

Queried if Brazil can sustain three airlines – Azul, LATAM and GOL – Mr Alvo remarked that “definitely three players in a market such as Brazil can work very well.”

Mr Alvo also said that the “recovery of the country itself is interesting to see,” adding that Brazil is LATAM’s largest market: “40% of our resources and our capacity sits in Brazil”. He highlighted LATAM’s position as one of Brazil’s largest domestic airlines, and its ability to provide global connectivity to and from Brazil.

Additionally, Azul and LATAM have forged a codeshare that at the end of 2020 included 151 nonstop routes. Previously, Azul has said that the partnership is a way for each airline to bring their networks back online as quickly as possible, as well as reducing uncertainty.

Brazil: system seats by airline, as of mid Mar-2020 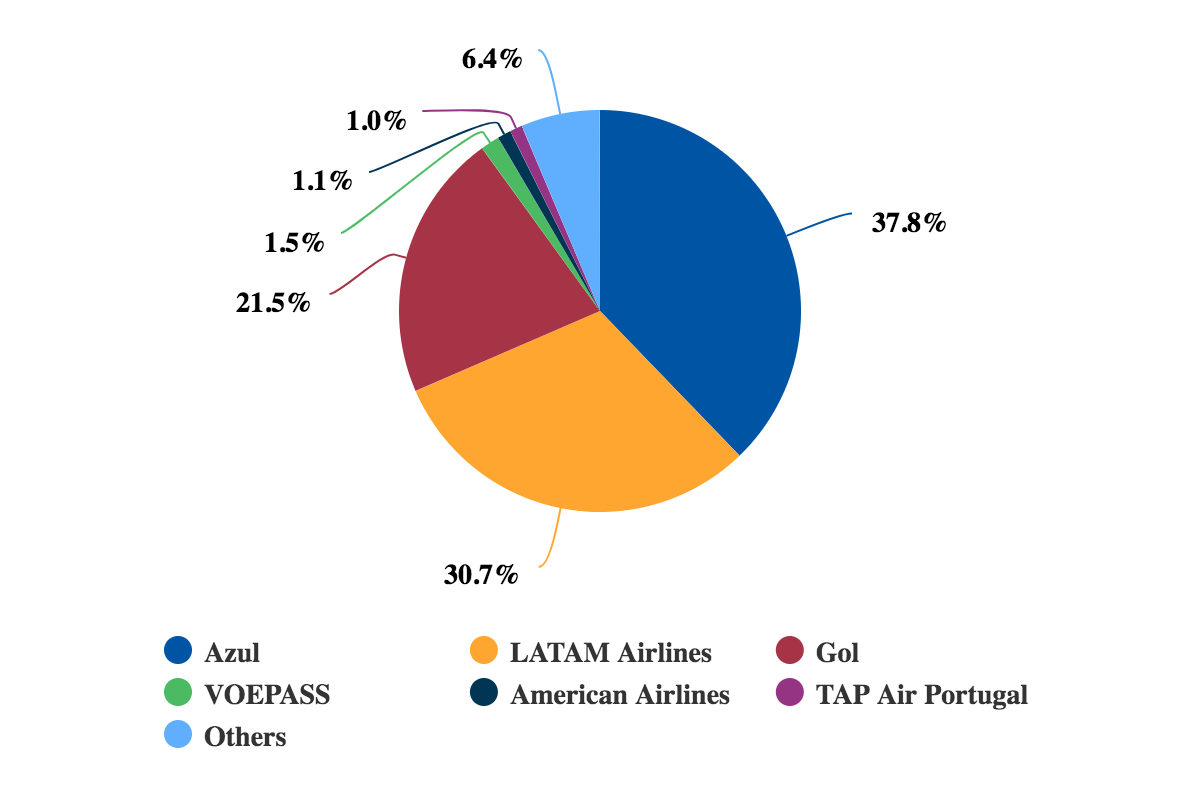 It has been well documented that governments in Latin America have not been willing, or in a position, to offer the region’s airlines similar levels of aid to those that airlines elsewhere have received.

As a result, Avianca and Aeromexico have joined LATAM in Chapter 11 bankruptcy protection, and other airlines continue to struggle financially.

Asked if some airlines simply will not be able to overcome those financial challenges, Mr Alvo said that before the pandemic, airline debt in the region was 60% to 70% of revenues.

“The recovery is going to be slow, and we will have probably 200% of debt to revenues for the airlines that have not brought themselves into a restructuring process like us”, said Mr Alvo, noting that “the math doesn’t add up.”

As a result, the composition of Latin America’s aviation industry could change.

There’s been a lack of coordination among governments in Latin America during the pandemic and as a result, airlines are navigating a patchwork of travel restrictions.

“I think that the recovery…will be challenged by the rules”, said Mr Alvo.

“We need to think about how do we make the airline industry come back as fast as possible”, said Mr Alvo. “And the governments will definitely play a key role here.”

There is little doubt that the COVID-19 crisis has, in some ways, permanently altered the global aviation industry. And there will be winners and losers in that structural shift.

LATAM believes it is firmly entrenched in the first category, the winners, and is aiming to emerge from bankruptcy as an even more forceful competitor.