Bahrain Air this year will move its hybrid business model closer to the premium end of the spectrum with the addition of proper business class seats and other service enhancements as the carrier seeks to better tap the Gulf’s premium market while maintaining a low-cost base to competitively fill the back of its aircraft.

This adjustment, along with six new routes to be added this year, will help the carrier put an incredibly difficult 2011 behind it. CEO Richard Nuttall says the renewed expansion will continue the growth launched in 2H2011.

Bahrain Air has a long list of routes it has indicated it is interested in operating, particularly to Tirvandrum, Delhi, Pune, Goa, Amritsa and Chennai in India and Lahore, Multan and Peshawar in Pakistan. South Asia-Middle East links have become common due to large South Asian workforce in the Gulf. Bahrain Air also has interest in Northeast Africa as well as Iran and Turkey. No formal announcements to specific routes have been made yet. 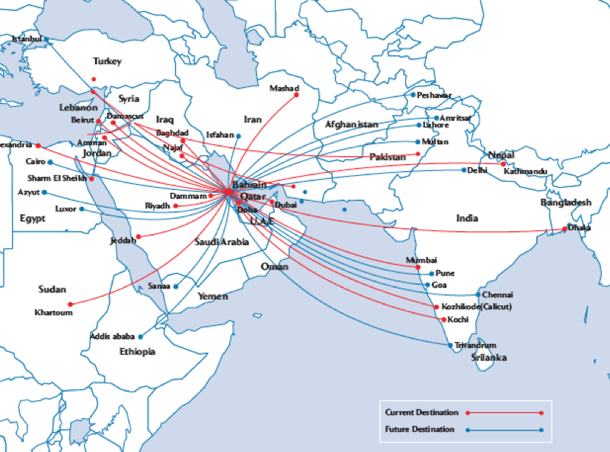 Bahrain Air is expected to unveil at this weekend's Bahrain International Airshow its new premium product, a critical element in the airline’s shifting focus towards the premium end of its ‘premium value’ model. The carrier’s hybrid model emerged in 2010 after launching operations in 2008 as a LCC. Like other hybrid carriers – such as AirAsia X, Jetstar and Virgin Australia – the airline discovered a market for a premium product that was able to be priced below the competition since the carrier has a LCC-originating cost base.

Bahrain Air’s “business premium” product does not feature a true business-class seat but rather a standard seat with extra legroom and the middle seat in the row turned into a workspace for the passengers on either side, commonly found in short-haul flights within Europe. Bahrain Air is expected to announce a proper business class seat, following the footsteps of AirAsia X and Virgin Australia that there is a market for true business seats – and the associated yields – than more premium economy-like options.

Bahrain Air offers two classes aboard its fleet of two A319s and three A320s. The carrier configures its A319s with 120 economy and 12 ‘business premium’ seats, while its A320s have 150 economy seats and 12 premium seats.

Bahrain Air will be looking to fill its business class seats from primarily the business travellers who account for 16% of its traffic, as well as new passengers the carrier can attract because of the improved offering.

The carrier has been busily adding service enhancements to its product over the past few months. Payment options have been enhanced through tie-ups with Bahrain Finance Company and UAE Exchange. At the beginning of 2012, Bahrain Air officially launched its ‘loyalty rewards programme’ in which seven one-way flights can earn a free one-way ticket while 11 one-way flights can earn a free return ticket.

Distribution has also been enhanced. The airline has also migrated to a new booking system, providing passengers with more flexibility and additional options to book ancillary services when they make flight reservations. Part of the motivation for this was to improve its reservation system so that it can expand its relationships with other carriers, via codeshares and interline partnerships. Bahrain Air signed its first ever interline agreement, with Sri Lankan LCC Mihin Lanka, in Aug-2011 and negotiations with other carriers are underway.

Bahrain Air building and rebuilding for expansion in 2012

Bahrain Air is now looking to expand after curtailing its initial growth. Following Bahrain Air’s maiden flight to Dubai, the carrier expanded rapidly and by mid-2009 served 22 destinations across the Middle East, Africa and the Indian subcontinent as it increased its fleet to eight aircraft. At the time, managing director Ibrahim Alhamer forecast possible financial breakeven by 2011 and traffic of more than one million passengers p/a.

Now breakeven has been pushed back to a 2013 or 2014 time frame as growth was slowed following higher than anticipated fuel prices and other cost such as insurance, as well as lower than expected traffic levels. There was also stronger than expected regional capacity growth from other, larger carriers.

On top of this came a disastrous six months due to the local political disruptions and the wider civil unrest of the Arab Spring. Bahrain Air’s passenger traffic dipped 65% between Feb-2011 and Jun-2011, but traffic recovered over the second half of the year, allowing the carrier to still report double-digit growth in passenger numbers for the full-year period.

Although routes suspended during the Arab Spring – like Kathmandu and Riyadh – were brought back or, in the case of Kuwait, plan to be brought back, the same cannot be said of Iran and Iraq due to a local operating ban, a restriction local rival Gulf Air has also suffered from. 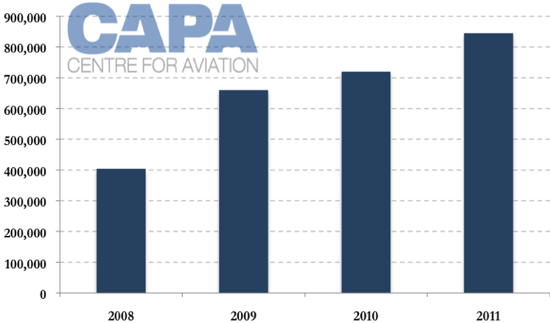 With a small home market, Bahrain Air competes with Gulf Air across the majority of its regional and South Asia routes. With the state-owned carrier staying in the headlines due to its restructure, Bahrain Air has been operating in the shadows despite making headway in the local market. Bahrain Air is contemplating serving Dubai upwards of three times per day, potentially making the city the largest by available seats in the carrier’s network. 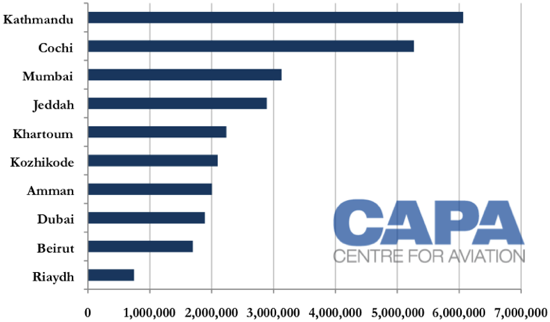 After a strong – perhaps too strong – of a launch quickly followed by a number of major external events, Bahrain Air is stabilising with a new premium product it can use as part of its new direction, which will hopefully, and finally, lead to healthy growth.