Aviation continues to underperform in GE’s portfolio in 2010. While all other manufacturing segments at the conglomerate have reported either flat or improving revenue, aviation equipment revenue at GE dropped 8% in 2Q2010. Aviation services revenues were also down in the quarter, falling 5% to USD2.3 billion, again the worst performing segment in the company’s protfolio.

But the overall revenue performance in the aviation segment is returning, and the results in 2Q2010 are “as expected” by GE. The lacklustre performance of the segment has been a drain on GE’s Technology Infrastructure segment, as it is the largest contributor to revenue and profit. Aviation revenue was USD4,259 million during the quarter (down 8% year-on-year) and aviation profits of USD879 million were down 5%.

Aviation orders were down 6%, a result of continued slow equipment sales (-4% decline in engine orders) and worsening commercial & military services environments. The company expects to deliver about 2,000 commercial jet engines in 2010 - an increase of 70 engines over the 2009 - through GE Aviation and its two engine JVs. GE is involved in CFM International (a 50:50 partnership with Snecma) and Engine Alliance (a 50:50 partnership with Pratt and Whitney).

Aviation services revenues were hit by airlines deferring overhauls and lower associated parts sales. GE noted it had 80 fewer overhauls in the quarter and airlines reduced the scope of overhauls and repairs, driven by the their need to preserve cash.

GE Aviation had a USD19 billion equipment backlog, down by approximately 3% over the quarter. There was also a USD59 billion commercial services backlog. The company reports that it has a “deep pipeline of leadership products” in its aviation segment, with new engines coming on-stream, both from GE Aviation and its JVs such as CFM International and Engine Alliance.

During the quarter, GE Aviation also completed an important strategic tie up with China Aviation Industry Corporation (AVIC), continuing its long-term push into China. The JV has been selected to provide the avionics systems package for the new COMAC C919 family. GE will provide more content for the C919 than it has for any other a previously. Chairman and CEO, Jeff Immelt, stated the JV provides GE with a “chance to leapfrog some of our competitors.”

While GE Aviation revenue has suffered, GECAS had a much better second quarter. The aviation leasing business reported an 8% improvement in revenue and a 1% increase in profit for the quarter. For the first half of the year, GECAS has earned USD605 million (+11% year-on-year), on USD2,498 million in revenue (+10%).

In trading on Friday, EADS shares dipped as more details emerge on its potential bid for the US Air Force refuelling-tanker order. US political opposition to the EADS bid continues to run high. EADS has stated it is willing to dip into its EUR8 billion liquidity reserve for future defence acquisitions, but has also stated that spending cuts in Europe and the US will push it into more “attractive” defence markets such as Brazil and India. 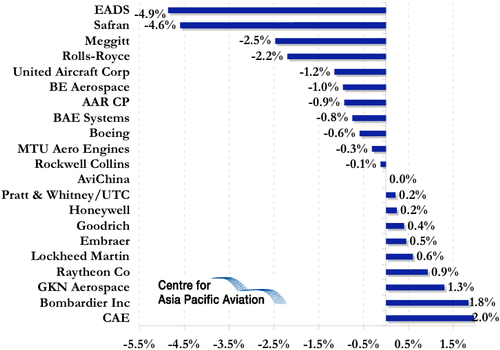 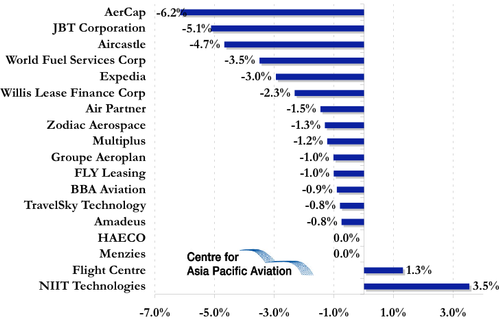