Jetstar Airways is on the cusp of overtaking parent Qantas as the bigger airline by international passenger numbers as the LCC subsidiary continues its relentless growth in both the Australian domestic and international markets.

The latest figures issued by Qantas Group for Nov-2012 show the stark contrast in the fortunes of the two stable brands. Jetstar grew both its domestic demand and capacity in Nov-2012 compared to the same month a year ago, while Qantas mainline demand, excluding QantasLink, was flat on a modest increase in capacity.

The story is even more pronounced on the international routes where Jetstar put in double digit-growth for both measures and Qantas continues to fall away. If the current trend continues, Jetstar could overtake Qantas within six months as the biggest carrier by passengers carried to and from Australia.

Qantas group carried more passengers in Nov-2012, thanks to Jetstar

At the group level Qantas’ passenger and capacity numbers look relatively healthy. Total passengers carried in Nov-2012 was up 6.4% to 4.12 million. Total passenger numbers were up 4.1% for the first five months of the fiscal year ending 30-Jun-2013 to 20.49 million.

Growth in demand at the group, measured as RPKs, was up a more subdued 1.3% for the month. Capacity, measured as ASKs, gained 0.7% in Nov-2012 and 2% for the financial year-to-date.

But the devil is in the detail, and those show Jetstar Airways (excluding Asian affiliates and joint ventures which make up the Jetstar Group), taking great strides on all measures domestically and internationally while the Qantas premium brand works its way through its restructuring programme and engages in a fight for more domestic market share, particularly the corporate sector. 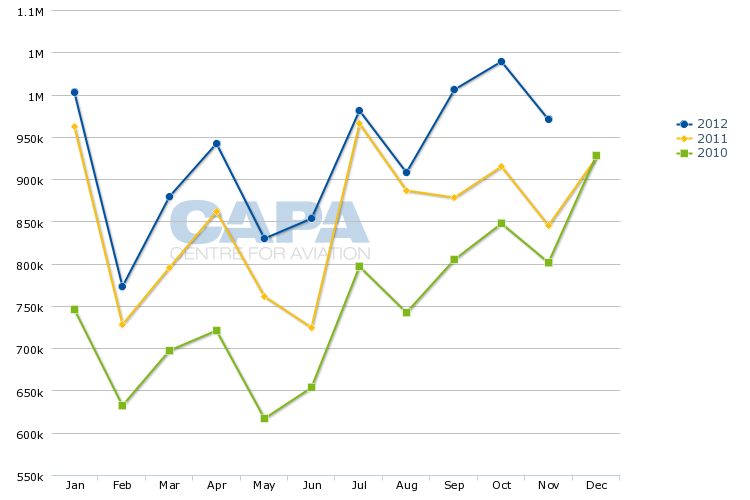 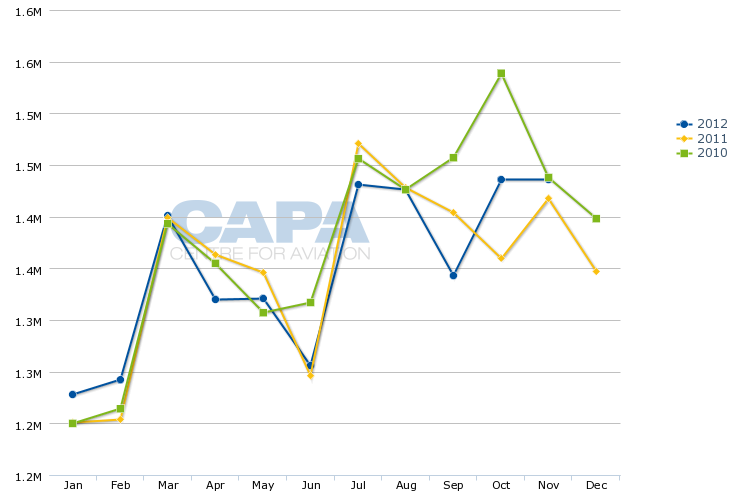 For the first five months of FY2013 Jetstar grew domestic passengers numbers by 9.2% to 4.9 million, while Qantas was flat at 7.32 million. Jetstar's international traffic over the same period gained 13.8% to carry 2.15 million passenger while Qantas carried 2.39 million, down 4.9%. If this trend is maintained, Jetstar could overtake Qantas within six months as the group’s biggest international carrier by passengers numbers. 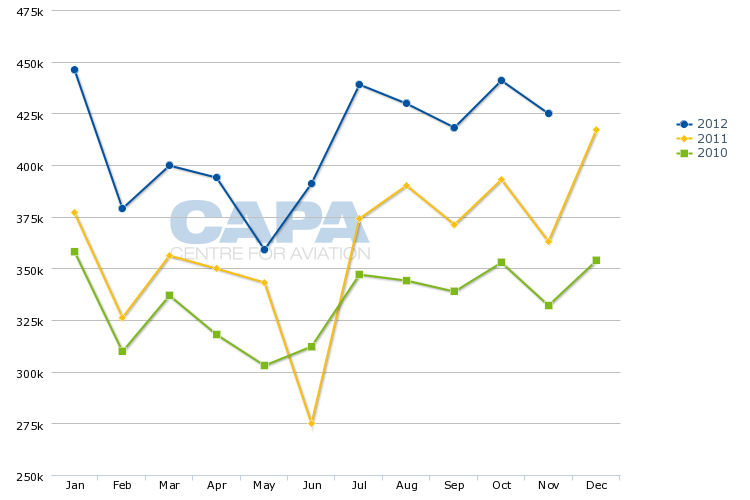 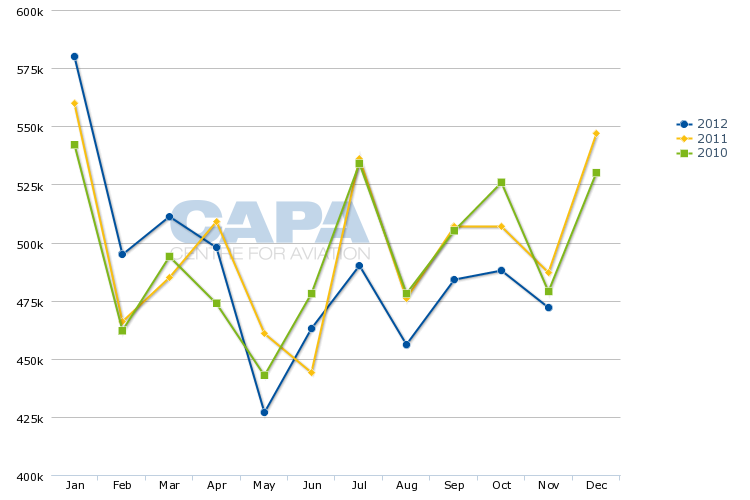 Qantas management said at the carrier's annual financial results briefing in Aug-2012 that the carrier expects to grow domestic capacity by 9-11%, with absolute growth split between Qantas and Jetstar, leading Jetstar to have higher growth percentage than Qantas given its smaller size. Overall group capacity in FY2013 is expected to increase only 3-4%, reflective of Qantas' reduced international operations.

Qantas international paints a gloomy picture with RPKs in Nov-2012 sliding another 4.3% to 3.88 billion, taking the year-to-date decline to 5.9%. International ASKs were cut back even more aggressively by 7.1% in Nov-2012 to 4.77 billion and 6.7% for the financial year-to-date.

Qantas launched Jetstar in 2004 as a foil against then LCC competitor Virgin Blue, which has since morphed into Virgin Australia as a full service carrier. As part of a hugely successful dual-brand strategy, Jetstar has taken over for Qantas on underperforming routes and has also been used to grow the market. Qantas CEO Alan Joyce stated in Apr-2012 that 10% of Jetstar’s passengers had never flown before.

Jetstar made two major capacity announcements in 2012 and plans to add more than 1.2 million seats to the domestic market in the financial year ending 30-Jun-2013. In Jan-2012 Jetstar announced it would increase its domestic capacity by adding frequencies to key domestic destinations from Melbourne to Cairns, Perth, Sydney, Adelaide, Gold Coast, Brisbane and Launceston. The increases added three weekly services to most of those routes.

Sydney-Gold Coast also received an extra daily frequency, taking the schedule to 84 services a week on the route. Adelaide-Perth was bolstered with three extra weekly services.

To help operate the expanded schedule Jetstar added a 13th A320 to its Victoria base and a fourth new A320 in Gold Coast.

In May-2012 the Qantas Group announced that capacity would increase on east coast routes in FY2013. Qantas responded to a resurgent Virgin Australia’s assault on the corporate market by strengthening its key business routes of Sydney-Melbourne with the addition of 11 weekly return services in Jul-2012 and a similar increase on Sydney-Brisbane in Aug-2012. Jetstar for its part focused on leisure traffic on east coast routes, adding 21 weekly return services between Sydney and Melbourne in Aug-2012 and adding a daily Sydney-Adelaide return in Nov-2012.

A large portion of the increase at Jetstar is to Tasmania which has seen capacity boosted by 408,000 seats in FY2013 split between Hobart and Launceston. 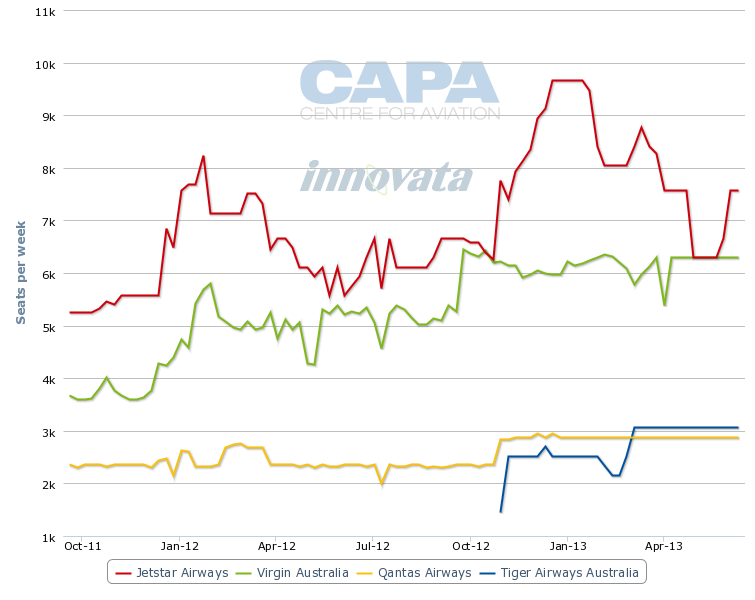 Capacity to Cairns was further increased by more than 200,000 seats in Aug-Sep-2012 from Sydney, Melbourne, Brisbane, Gold Coast and Adelaide.

However, those network improvements came, at least in part, from frequency reduction by both brands on some poor performing services in the Northern Territory. Jetstar in Aug-2012 reduced Darwin-Sydney from 11 weekly return services to daily return and Darwin-Denpasar from 11 return a week to eight return frequencies a week in Aug-2012.

Qantas has been forced to withdraw international routes and re-allocated aircraft to defend its lucrative domestic market in the face of increased competition from Virgin Australia, and maintain its 65% market share it regards as optimal for overall performance.

The Jetstar Group has been tasked to develop the Qantas Group’s Asian reach through its Singapore operation, especially Southeast Asia. Jetstar Airways deploys 17% of its seat capacity on international routes including 15 destinations in Asia as well as to Honolulu in the US state of Hawaii, according to Innovata data.

Southeast Asia accounts for the bulk of Jetstar's international seat capacity. In the week of 17-Dec-2012 to 23-Dec-2012 Jetstar provided 37,098 seats to and from Southeast Asia, followed by Southwest Pacific with 19,269 seats, North Asia with 17,082 and North America (Hawaii) with 5,454. This excludes capacity provided by its Asian subsidiaries or affiliates. 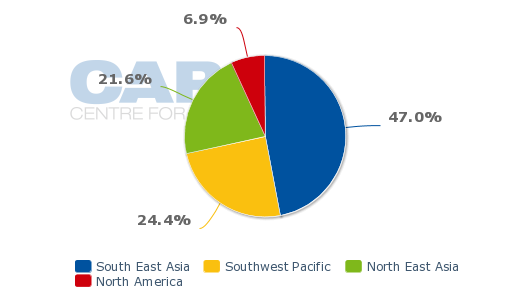 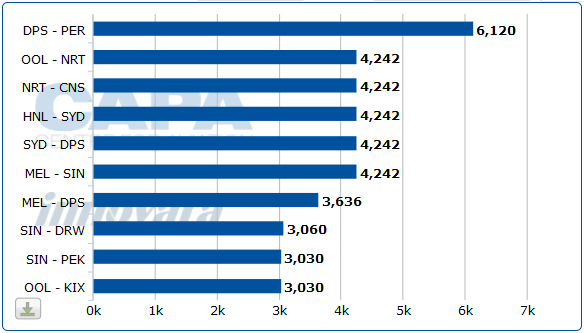 Jetstar has continued to grow its trans-Tasman and New Zealand domestic operation, adding a ninth A320 to its Auckland base in Nov-2012. This allowed it to offer an extra 600,000 seat per year on the New Zealand domestic network, where it competes with Air New Zealand, which currently accounts for an 80% share of capacity.

Jetstar kicked off 2012 by announcing on 18-Jan-2012 the introduction of a four times weekly Darwin-Manila-Tokyo service from 25-Mar-2012. In addition, capacity on the Darwin-Singapore route was increased from daily to 10 flights a week.

The new Darwin-Manila-Tokyo service links with the newly established Jetstar Japan joint venture, which launched in Jul-2012. It did, however, come at the expense of the four times weekly Darwin-Ho Chi Minh City service, which was withdrawn.

About 28,000 Japanese tourists visit the Northern Territory each year, making it the fourth largest international inbound tourism market for the region, according to Jetstar.

Jetstar is likely to outshine as Qantas international restructures

Qantas International losses have been a drag on the group’s profits for over a decade. A restructure programme was unveiled in Aug-2012, which included shedding unprofitable long-haul routes and a far reaching alliance with Middle East carrier Emirates. The Emirates alliance, which was given preliminary approval by the Australian Competition and Consumer Commission on 20-Dec-2012, is expected to deliver AUD300 million (USD311 million) of benefits annually and puts the carrier turn-around strategy on track.

However, Jetstar looks set to outgrow the mainline international brand in the medium term as Qantas seeks to maximise the high growth opportunities in Asia via the various Jetstar brands.

But even with a possible slowdown in long-haul capacity growth, Jetstar will likely surpass Qantas as a larger international carrier by the time Jetstar starts replacing its A330 fleet with new 787s.