American Airlines recorded first quarter revenue results that rivaled those of its legacy peers and brought its yields to commensurate levels. But its loss for the quarter is evidence of the cost disadvantage it has and is seeking to overturn in bankruptcy protection, just as its competitors achieved in a now well-trodden path. Yet this balance, simple on paper, is dismissed by American's over-zealous detractors. Even Southwest, the darling of the US industry, feels this narrowing cost gap.

But American is not entirely blame-free. Its disclosure of welcomed plans to increase international flights 6 ppts to 44% during the next five years will bring it in line with today's Delta and United. Like other moves, this latest seems to be one page behind in the playbook already worn in by the carrier’s legacy peers, although American is catching up with a premium economy option and surpassing with a new business class product. If it can rein costs in, American has a clear future.

American’s quest to remain competitive as a stand-alone entity continues as it works to reach labour accords with work groups that have now aligned themselves with US Airways in its quest to take over the company.

Overall during 1Q American continued its string of unprofitability, recording a loss of USD1.7 billion and USD248 million excluding restructuring and other special items. But the carrier recorded robust overall revenue growth, recording a 9.1% increase year-over-year to USD6 billion. Although the USD8.6 billion in revenue posted by United in 1Q was higher than American’s results, it was only 4.9% growth year-over-year. American’s revenue growth was just shy of the 10% growth achieved by Delta, which recorded USD7.2 billion in revenue growth.

The larger net revenue from Delta and United is partially reflective of their larger sizes and scale. Their ability to typically, in recent quarters, turn a profit while American records substantial losses is indicative of American's higher cost base it is now seeking to change under bankruptcy protection laws.

American grew its unit revenues 10% year-over-year in 1Q, which was almost double the 5.2% growth recorded by United but below the 14% increase enjoyed by Delta. American’s 7.3% increase in yields to USD15.2 cents was below United’s USD15.9 cent yields, but United only recorded 5.2% yield growth year-over-year. Delta, which is enjoying the completion of its integration with Northwest, saw its yields rise 9% to USD16.7 cents during 1Q.

Latin America continues to be the star in American’s network, as unit revenues grew 10.8% in 1Q on a 5% rise in capacity. Similar to its rivals, American wised up and cut trans-Atlantic capacity by nearly 5% in 1Q, which helped it achieve unit revenue growth of 6.5%. United achieved a close 6.2% growth in Atlantic revenues on essentially flat capacity while Delta’s trans-Atlantic unit revenues shot up 22% on a 9% reduction in capacity.

United can be expected to pull away from American in terms of revenue performance during the next year or two as it works through the full integration of its merger with Continental. Now that a painful cutover to a new passenger service system is complete, United can begin cross-fleeting to place the correct aircraft on routes to maximise revenue potential. If American succeeds in its quest to emerge from Chapter 11 as a stand-alone entity, it will start with a disadvantage out of the box and will continue to try and play catch-up with United and Delta.

Even as it grows international flights, American's competitive disadvantage will remain

The carrier’s main rivals United and Delta are already enjoying a higher level of lucrative international flying than American, having recognised many years ago the best strategy to combat the rise of low-cost carrier encroachment was to revamp their domestic networks to support the higher-yielding international flying. International operations accounted for about 48% of Delta’s flying in 2011 and about 49% at United.

In testimony to the US bankruptcy court, American seems to beat an old drum, outlining the creep of low-cost carriers into its markets, and how that has impeded its ability to compete, and now estimates it has LCC competition in 49 of its 50 top markets. The carrier claims it learned from “bitter experience” that if it failed to match LCC fares, it would lose traffic, and when it matched fares it did so at the cost of lower yields and profitability.

While other US carriers face ample LCC competition and co-exist with those carriers, it is because they have a competitive cost base that was achieved through the bankruptcy protection American is now in. Even the country's epitome of LCCs, Southwest Airlines, is feeling pressured as its cost gap is narrowed by carriers that reduced their cost base through bankruptcy protection.

As Southwest CEO Gary Kelly said in Nov-2011: “In the good old days, when the Legacy Carriers’ costs were higher, we brought our low costs and low fares to their markets, stimulated demand, and expanded dramatically. Now, while our costs are still lower, our advantage has been cut in half. We currently do not have a sufficient cost advantage to stimulate the market because our fares are much closer to our New Airline competitors.” 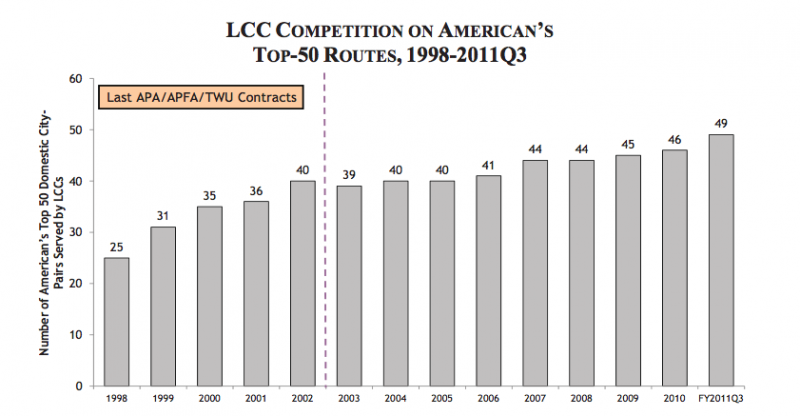 As it allowed low-cost carriers to invade its markets throughout the last decade, American also opted out of the consolidations that emerged beginning in 2005 with US Airways-America West. It was burned by its acquisition of the assets of TWA early in the 2000s as it made that purchase to counteract a United-US Airways merger that never materialised. As a result, American lost an opportunity to merge with numerous legacy carriers as they emerged from bankruptcy. It now finds itself left behind as those merged entities have created scale that will be difficult for American to compete against as a stand-alone entity. Delta’s operating revenue advantage over American since the merger with Northwest has clearly widened, and the revenue from international operations mirrors the larger revenue gap between the two carriers. 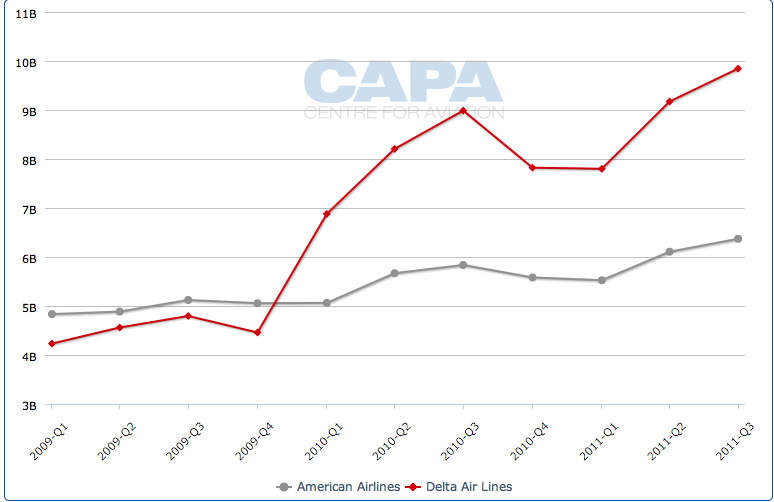 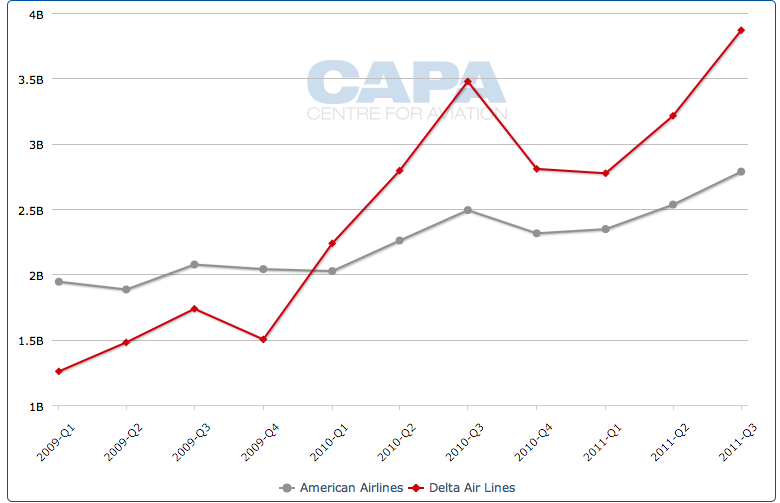 American expected to target Latin America and Asia for growth

American did not disclose where it would make its international push, but Latin America and Asia can be expected. While Asia has general high growth projections, Latin America is American's strongest market and also where it is superior compared to peers. Sao Paulo will be the first destination for American's premium-focussed Boeing 777-300ER.

Members of the three trans-Atlantic anti-trust joint business ventures among the oneworld, SkyTeam and Star Alliance partners appear to be practicing capacity rationalisation in the increasingly mature US-Europe market. American lags behind United and Delta in the trans-Pacific, although a year after launching its joint venture agreement with Japan Airlines the carrier did grow its Pacific revenues 6.5% on 11.5% capacity growth during 1Q, which was better than United’s 0.2% decline in unit revenues (figures are skewed from the Japanese earthquake and tsunami affecting the tail end of 1Q2011).

United cited competitive capacity growth in its Pacific markets, and opted to manage its capacity down in those markets, which pressured its unit revenues. Part of the competitive capacity introduced in United’s Pacific markets stems from new Chicago-Hong Kong flights introduced by American’s oneworld partner Cathay Pacific and flights launched by American from Los Angeles to Shanghai, a route also launched by United that is also operated by China Eastern. Any additional capacity added by American in the short term will intensify the competitive environment and likely dilute the revenue potential in the trans-Pacific market, although longer-term prospects are bullish. American cut its only flights to India earlier this year when it ended Chicago-Delhi flights after the route consistently underperformed.

American's potential in Latin America is further advantaged as it has an edge over Delta in the region as SkyTeam’s weakness in Latin America is clearly pronounced. It has strength in Central America through its partnership and investment in fellow SkyTeam partner Aeromexico. In South America, the ever unstable Aerolineas Argentinas is a SkyTeam member elect, but given the breadth of changes the carrier must make, its timetable for membership is not certain. Even then its network is not enviable. Delta's investment in Gol could be the first step to see the large Brazilian carrier align with SkyTeam.

oneworld will likely gain an upper hand in Latin America once LAN and TAM close on their merger and select for the combined carrier an alliance, expected to be oneworld. That would leave a huge hole for Star, which is currently aligned with Brazil’s largest carrier TAM. The combined capacity in the US-Brazil market by American and TAM would far outpace the ability of Delta and United to catch-up to the oneworld dominance. American has already announced plans to launch new Miami-Manaus flights in June of this year. 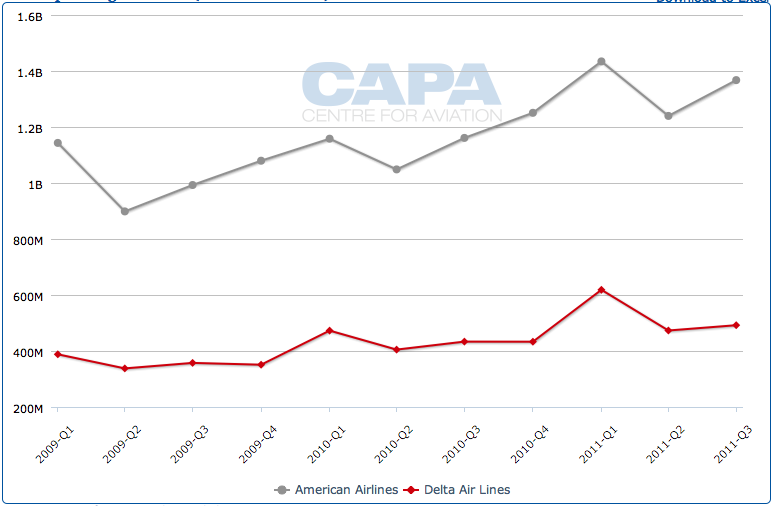 Increased international flying to be met with product changes

American will retrofit its three-class 777-200 fleet to a two-class cabin with no first class, leaving the dwindling global appeal of international first class to only a top tier of routes that will be served by the carrier's 777-300ERs. The first 777-300ER is due at the end of 2012 and the carrier will take additional frames in rapid succession, amassing a fleet of 10 by the end of 2013. Additional aircraft beyond this initial 10 are all but guaranteed. The aircraft's dynamics should not be underestimated. The 777-300ER has been lavished with praise by Cathay Pacific and Emirates and its lower unit costs will help American while also allowing for further revenue growth.

The 777-200s and 767-300s will be retrofitted starting in 2014 with American's Main Cabin Extra, its quasi-premium economy to match Delta and United's offering. American may have showed inertia with this product, but its eventual presence will also allow for revenue growth. The aircraft will also be retrofitted with American's new business class product, similar to what is offered by Cathay Pacific and US Airways amongst others, placing American in a position of having a formidable international network especially strong in Latin America that is matched with a strong onboard product, making it a very powerful challenger to Delta and United. It is a strong vote of confidence, which is what American – as it fends off US Airways and tries to win over its unions with competence – needs, hence the reason it announced its plans nearly two years in advance. With the announcement, American is also growing its distance on the premium and passenger-focussed spectrum from US Airways. That may help the carrier suggest an American-US Airways merger, which almost everyone but American management clamours for, is not compatible in the carrier's view. American has repeatedly stated its desire to exit bankruptcy independently.

American presents solid vision, but will its employees recognise it?

American has laid the groundwork for very achievable revenue growth. It is not growth for growth's sake, which was a tactic used unsuccessfully by US legacy carriers for decades, but growth where there is demand: premium economy, Asia and Latin America. Now American needs its unions to recognise these solid plans, even if late, and give American the cost advantage it needs to see its growing revenue become a profit and not a loss.