American Airlines has been under pressure to explain how it will increase annual revenue by USD1 billion by 2017. While the number may be daunting, it represents only a 4.2% increase in 2011's overall revenue of USD23 billion. Additionally, American has made revenue leaps before: a USD1.8 billion increase from 2010 to 2011 and USD2.3 billion from 2009 to 2010. It is difficult to separate out previous adverse trading conditions from structural changes, but American has outlined a very achievable agenda independent of revenue growth from any possible merger or acquisition.

American Airlines COO Virasb Vahidiin, in a letter to employees, detailed that approximately two-thirds of the USD1 billion revenue changes will come from fleet changes. "We believe that right-gauging our fleet will result in a significant increase in our unit revenue, and will generate almost two-thirds of our USD1 billion in incremental revenue," Mr Vahidiin said. It is easy and quick to see how this plan can be realised.

Looking at American's mainline narrowbody fleet renewal, American plans to broadly replace its ageing and costly 200-strong MD80 fleet with Boeing 737-800s and A320 family aircraft. American has 119 737-800s due for delivery by 2017, its target period for the USD1 billion annual increase. Its 737-800s typically seat 18 more passengers than the MD-80s it is replacing. Using regulatory filings detailing average sector length, utilisation and domestic yield, each 737-800 could bring in an extra USD7500 revenue a day over the MD-80. Extrapolating that growth to the 119 new 737-800s operating every day, American's annual revenue would increase by USD323 million – about a third of its revenue target just from one, albeit large, change. (Southwest is using a similar strategy this year: its fleet count will stay about the same but capacity will grow as it replaces smaller 737s with larger 737s.)

The strategy – and reality of the revenue target – becomes more compelling when considering nuances. For example, American's domestic yield is below its global average. Latin American yield is the highest, and with American already increasing capacity to Latin America – which the 737-800 is capable of reaching – using the new aircraft to open new routes to Latin America further boosts revenue growth. By 2017 American expects 20% more flights, and primarily international flights. 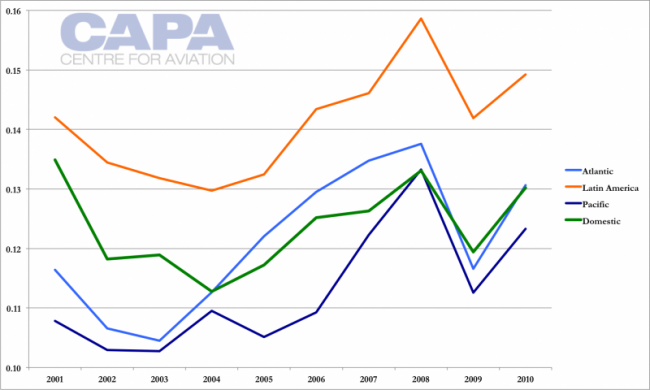 Still in the narrowbody sector, American plans to take 110 A320 family aircraft by 2017. Those present further revenue growth, particularly given the ability of the smaller A319 to access new markets that would otherwise not be profitable with larger aircraft, or the larger A321 to grow revenue in markets that can support more demand than a 737-800 but less than what a 757-200 would supply at a higher operating cost.

Widebody aircraft will also facilitate revenue growth. American plans to take 16 777s (10 -300ERs and six -200ERs) by 2017. The 777-300ER is particularly interesting as American has revamped the interior product, including in premium cabins, and brought the aircraft to truly international standards, as Delta Air Lines, United Airlines and US Airways have done in recent years. A better product will lead to better yields. American plans to first deploy the 777-300ER at the end of the year on its business-heavy route to Sao Paulo in Latin America, which again has the highest average yield for America.

American Airlines is also targeting its regional fleet, which due to scope clauses with its mainline pilots prohibits the airline from using regional aircraft with more than 50 seats. American during its bankruptcy proceedings is seeking to overturn scope clauses, which if successful would enable it to operate larger aircraft, as its competitor United does. Being able to fly larger regional aircraft will be another significant revenue increase for American, but its full effect will not be as prominent by 2017 as American's orders for A320s and 737s existed prior to its bankruptcy filing.

In addition to seeking to overturn scope clauses on its regional fleet, American also wants to be free to codeshare domestically with more airlines and in turn increase revenue, especially, as Mr Vahidiin noted, in slot-restricted and other constrained airports. While Mr Vahidiin did not name specific examples, Chicago, New York La Guardia, Newark and Washington National are constrained. American in the past has expressed a desire to work closer with Alaska Airlines, and has increasingly built-up its relationship with JetBlue.

American is also enhancing partnerships on its more profitable international sector. It is expanding its joint business agreement (JBA) with Qantas and already has anti-trust immunity with Japan Airlines (JAL) across the Pacific and with British Airways and Iberia across the Atlantic. The Qantas JBA aims to increase overall revenue by closer working arrangements, and also saw Qantas shift a Sydney-originating service from San Francisco to Dallas. American has a far smaller presence at San Francisco than its Dallas hub, creating additional and higher-yielding onward connections out of Dallas than San Francisco. JAL will also be increasing its trans-Pacific capacity, adding in the short-term new routes from Tokyo to Boston and San Diego; more are flagged as the carriers looks to grow international revenue as LCCs encroach on its domestic space. JAL has also explicitly stated it will work more with its partners to feed its US flights, demonstrating the powerful ability of close alliances to boost revenue from both parties.

American has not put revenue growth figures on its alliances, but information from International Airlines Group (IAG), the parent company of British Airways and Iberia, does shed light. IAG expects its trans-Atlantic alliance to bring an additional annual revenue of EUR150 million. While American's benefit would not be the exact same, it would be in IAG's range. IAG reports the joint business by Nov-2011, about a year in, saw its premium market share increase by 0.9% along with a 0.1% increase in capacity while non-premium market share increasing by 0.1% with a 0.1% decrease in capacity – promising if early signs as the alliance still beds down and further improvements are sought.

With cost cuts, American has plan – but now must execute it

The USD1 billion of additional annual revenue, which follows previous announcements of USD2 billion annual cost savings, must also be tied to fleet changes. The combination is attractive to boost American's margin, but American must now work to implement the plan, which will not be easy. Although international partners are relatively stable and less a concern to achieving its turnaround plan, American will confront owners of additional older aircraft it wishes to dispose of through bankruptcy court and must convince union concessions fleet size and codeshare opportunities are necessary on top of previous concessions. Creating this plan was easy; bringing everyone onboard will be the challenge.