Bankruptcy may save American Airlines, but what will save the US airline industry?

American Airlines (AA) will take the well-trodden bankruptcy protection path: lower labour costs, dispose of old aircraft and reduce or eliminate its pension scheme. By most accounts, bankruptcy protection will help AA return to profitability, just as it did for its counterparts last decade. But there is a larger problem in the US industry, and bankruptcy will not fix it.

AA parent AMR in its bankruptcy filing affidavit identified the problem, although perhaps unwittingly, when it said: “AMR long ago learned, through bitter experience, that if it does not match competitors’ fares on a route, it will lose customers to the lower priced carrier. Thus, experience has taught AMR that having higher prices results in lower revenues, rather than higher revenues”.

The focus on cost has made service forgotten, yet the two go hand-in-hand when purchasing a ticket. The market seeks not low costs but value. Low-cost carriers have globally performed well on short-haul flights because passengers are willing to forgo frills on short distances. Legacy carriers are still in the market, although not as big as they used to be, but exist not because the LCC seats were all filed up but because they offer value, ranging from frequent flyer points to meals.

Both Singapore Airlines and Tiger Airways fly the four-hour flight between Singapore and Hong Kong. On the former is on demand in-flight entertainment with more options than you can watch while the latter will weigh your cabin luggage to ensure you are not evading checked baggage fees. But in the US, airlines fight over cost, not service, and with ramifications for the industry.

“Two LCCs standing up toe-to-toe, facing each other off is a bit like trench warfare,” Virgin Blue founder Brett Godfrey remarked in 2009, explaining in part why his carrier moved upmarket, added frills and fell into its own price category.

The nuclear option would have been all new narrowbody aircraft that would bring step changes in efficiency, as Mr Godfrey uses in an example, but step changes in efficiency can also come from bankruptcy re-structuring. “If price is your only loyalty and sustainability is dependent on having lower costs than your competition, what happens when, as advocated and stated by Boeing, Airbus, and the engine manufacturers, these guys deliver the 20-25% step change in cost for the next new plastic fantastic?”

Mr Godfrey concluded on the power of costs and ticket prices: “Without that loyalty, what happens to your customer base? Are Ryanair really smarter than Pan Am?”

Southwest CEO Gary Kelly has that worry. The LCC that became a model for the rest of the industry was built on lower costs. There was differentiation in chirpy employees and more recently free snacks and checked luggage, but its loyalty was based on cost and is now being eroded. Mr Kelly earlier this month wrote to employees, saying, “In the good old days, when the Legacy Carriers’ costs were higher, we brought our low costs and low fares to their markets, stimulated demand, and expanded dramatically. Now, while our costs are still lower, our advantage has been cut in half. We currently do not have a sufficient cost advantage to stimulate the market because our fares are much closer to our New Airline competitors”. Mr Kelly was calling for labour productivity improvements to regain an advantage. In 3Q2011, Southwest’s cost per available seat mile was USD12.26 cents. United was only USD13.05 cents and Delta USD14.16 cents.

Like American Airlines, Malaysia Airlines (MAS) faces its costs outstripping revenues. Its most recent business transformation plan, announced last week, calls for a cost reduction programme but also revenue improvements. MAS delivered a frank assessment of itself, saying its performance was affected by “a loss of focus on its full service offering leading to a drop in quality standards and passenger load, and lower average pricing levels compared to regional peers”.

Southwest as a LCC has limited opportunities to increase revenue based on service. AA has more opportunities. Its earlier statement that “having higher prices results in lower revenues, rather than higher revenues” indicates, as MAS found, that not only are costs too high but there has been a loss of focus and quality, whatever the baseline – domestic or international, US or Asian – may be. Cathay Pacific, Emirates and Singapore Airlines all have higher costs than MAS. Those costs represent, in part, more premium service, which lets Cathay, Emirates and SIA have higher revenues than Malaysia. In the US, the relationship between cost and service is turned upside down: legacy carriers are beaten on cost by LCCs that also have higher service. But with MAS, US legacy carriers share a problem of lost focus and quality. 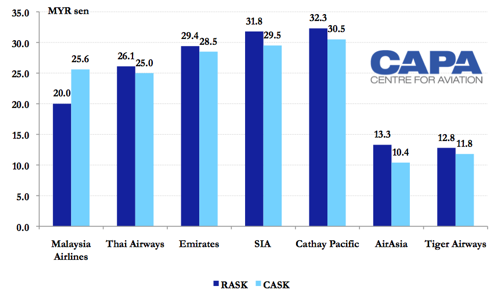 Completely stripping out legacy costs is impossible. Moving upmarket is the solution for MAS and can be for AA and other US carriers – and AA is taking the first steps to do so. The premium cabin interiors of its forthcoming fleet of 777-300ERs for international routes will include walk up bars, lie-flat seats and direct aisle access for every seat. These features are more commonly found on Middle Eastern and Asian carriers, but for a US carrier are big improvements.

AA is helped, and perhaps nudged too, by its anti-trust immunity with British Airways (BA) and Iberia, including on the New York-London route, the largest single long-haul premium market. Standards are high, but so too is demand and what companies will pay, at least during better times. It is to Heathrow where AA will first deploy its 777-300ER, and the product will more closely align to that of BA. AA will also be the first airline globally to feature new 777 ceiling and entrance architecture designs.

The new 777-300ER interior followed an announcement a few months earlier that AA’s first class would start to feature pajamas and a quilted bed topper – perhaps new to the US but long common internationally. Other US carriers have shown seat product improvements, but AA is alone at looking at its entire proposition and adding, from bars to pajamas.

In headlines, AA is represented as the end of the traditional US airline industry, but it may be the one to bring the industry back to a sustainable position where competition is fought not just on the endless war of price.