Alitalia may need to seek (another) last chance as funds shrink

Alitalia had another bad start to the year. Its 1H2013 net loss, reported on 26-Sep-2013, was EUR93 million worse than the same period last year and it faces the real prospect of running out of funds before the year end.

Only eight months after requesting an emergency loan from shareholders, its Board will seek a EUR100 million capital increase at a shareholders’ meeting on 14-Oct-2013. 25% owner Air France-KLM has signalled opposition to this plan and this sum may not even be sufficient beyond the short term.

Alitalia’s 2013-2016 industrial plan, announced only in Jul-2013, aims for breakeven at the net profit level in 2015. This will not be worth the paper it’s written on if Alitalia does not manage to raise survival funds quickly. The Italian government, although not a shareholder, is reported to be talking to Italian banks about additional loan finance. If Alitalia’s short term needs can be met, this could give vital breathing space for a long term solution to be found, possibly involving new shareholders. But more "last chances" cannot be anticipated.

Alitalia lost a cumulative EUR843 million from when the ‘new Alitalia’ was created in 2009 to the end of 2012. In 1H2013, Alitalia saw a widening of its net loss from EUR201 million to EUR294 million. The result included EUR50 million of extraordinary provisions, of which EUR47 million related to a fiscal dispute on Irish companies belonging to the former Air One Group. Perhaps a more meaningful comparison with the first half of last year comes from looking at the operating result before non-recurring income. This result improved slightly to a loss of EUR237 million in 1H2013, versus a loss of EUR255 million in 1H2012.

This international and intercontinental expansion at the expense of domestic routes reflects Alitalia’s 2013-2016 industrial plan, as well as what it calls “the national economic recession”.

Excluding non-recurring income, revenue per passenger increase by 3% to EUR148, while costs per passenger were just below flat (-0.3%) at EUR174 in spite of increased airport/ATC charges, noise charges and costs related to the Emissions Trading System. The gap between these two figures remains very large, but it is at least narrowing.

Liquidity has fallen since Dec-2012

The summer quarters are typically ones of cash in-flow for European airlines, so this reduction in liquidity from Mar-2013 to Jun-2013 is a concern.

Alitalia's board proposes a capital increase

When announcing its 1H2013 results on 26-Sep-2013, Alitalia said that its Board of Directors had requested that shareholders approve a capital increase of not less than EUR100 million in addition to completing a convertible loan for EUR55 million previously requested. Directors representing Air France-KLM, owner of 25% of Alitalia, reportedly voted against the proposed capital increase (Reuters, 26-Sep-2013). The Board will meet again on 3-Oct-2013 and a shareholders’ meeting has been called of 14-Oct-2013.

In addition, the Italian government is working with banks to help Alitalia’s financial position, at least on a short term basis. Regardless of the outcome of the shareholders’ vote regarding a capital increase, it is likely that the group will need additional access to credit and/or to take further measures to improve liquidity. 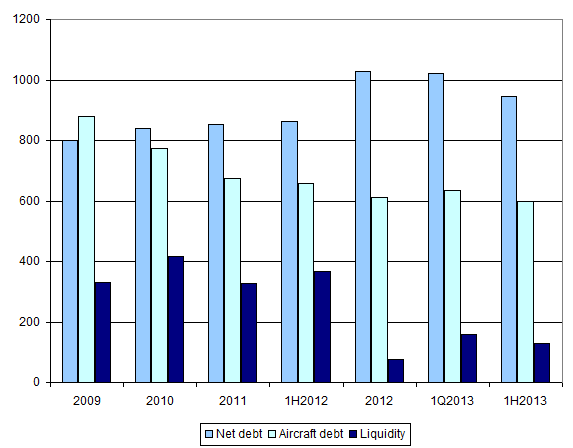 Alitalia’s industrial plan, announced in Jul-2013, includes an aim to increase financial resources by EUR300 million by Dec-2013, in addition to the EUR55 million increase in the convertible loan, without specifying how it planned to achieve this aim. A capital increase of EUR100 million would fall short of this target, so it may need to consider asset disposals in addition to further bank debt.

Against this background, an increase in financial resources of EUR300 million would seem to be a minimum working requirement to ensure another 12 months’ survival. The proposed EUR100 million capital increase may provide additional time for a longer term solution, possibly including new shareholders, to be found.

The challenge seems to be in persuading shareholders and banks to agree on the level and nature of additional funding. The consortium of Italian industrial and financial enterprises, who own 75% between them, invested in Alitalia in 2009 after the then Prime Minister Silvio Berlusconi made an election promise to keep Alitalia in Italian hands. The government could not provide aid and could not order Italian companies to invest, but Mr Berlusconi achieved his desired outcome through a behind-the-scenes process of political horse-trading.

This effectively prevented Alitalia’s commercial partner Air France-KLM from taking it over, although it then took a 25% stake and was given pre-emption rights to buy shares from the other shareholders from 2013. It was expected at the time that the Franco-Dutch group would eventually take control of its Italian partner. 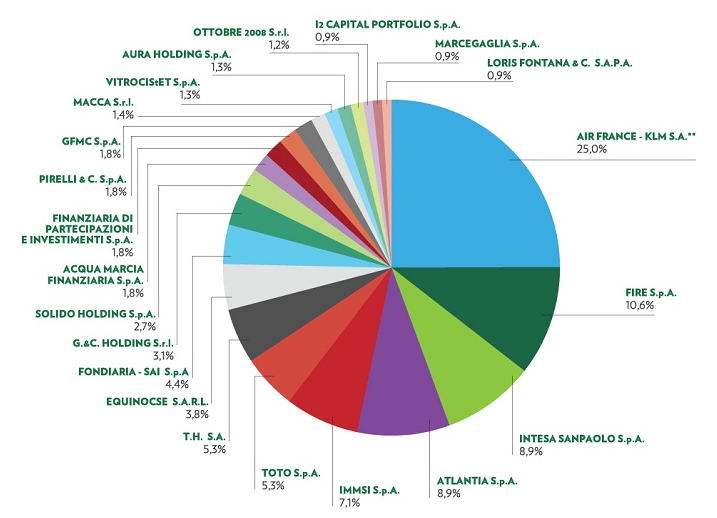 Air France-KLM are reluctant to buy into more problems

When the pre-emption rights became exercisable earlier this year, Air France-KLM indicated that it did not intend to exercise them. It is in the middle of its own restructuring programme, a key part of which involves lowering its net debt. A further investment in Alitalia would put additional strain on Air France-KLM’s debt reduction target, particularly if it took a majority stake and then had to consolidate Alitalia’s debt.

Moreover, investing in a foreign carrier when it is cutting its own workforce could be politically controversial for Air France-KLM. A further element of controversy would arise from the fears of the Alitalia workforce that Air France-KLM might reduce its international and intercontinental networks.

Italy’s transport minister, Marizio Lupi recently said that the government held “no prejudice” against a possible takeover by Air France-KLM, but it would likely require certain guarantees concerning jobs and the use of Alitalia’s Rome hub. This could limit Air France-KLM’s freedom to manage the Italian airline if it took a majority stake and it may well still be sensitive to previous political interventions by the Italians. Nevertheless, Air France-KLM has strategic reasons for wanting to sustain Alitalia and did subscribe to the convertible loan in proportion to its shareholding. It may be willing to continue to invest, provided that it does not increase its stake beyond 50%.

The Italian shareholders of Alitalia, many of whom were far from willing investors to start off with, are reluctant to keep throwing money into the perennially loss-making national carrier. Moreover, with activities ranging from toll roads to tyres and banking to holding companies, they do not see air travel as their core business.

If any of them refuse to subscribe to the capital increase, this could build the pressure on Air France-KLM to raise its stake.

Banks may also be reticent to make significant loans, although UniCredit, Intesa Sanpaolo, Banca Popolare di Sondrio and Banca Monte dei Paschi di Siena have been reportedly considering providing the EUR300 million that Alitalia is seeking. The Italian government may again be able to bring its influence to bear on Italian shareholders and banks, as in the past, although it cannot provide any direct aid itself.

One issue is the lack of clear shareholder leadership

One of the draw-backs of a consortium shareholder structure is that Alitalia has no overall controlling shareholder setting a clear strategic path. Moreover, frequent personnel changes at the top of the company have made it difficult for the management to provide this direction. Perhaps these changes also reflect the difficulties of dealing with the varying views of the different shareholders and the government.

Air France-KLM’s presence in the share register, and its four directors and two members of the Executive Committee, does provide some strategic guidance to Alitalia. Moreover, there is close cooperation on routes between Italy and France and the Netherlands and on long-haul routes served from Paris and Amsterdam.

However, Air France-KLM’s holding of only 25% and its preoccupation with its own problems have limited its ability to play a strategic leadership role. Furthermore, the perception among Alitalia employees of a conflict of interest between Air France-KLM’s desire to develop its own long-haul hubs at Paris CDG/Amsterdam and its position as an Alitalia shareholder have also prevented it from taking a more active leadership role among shareholders.

Is Etihad interested? It has no need to hurry and other priorities for now

If a non-Italian controlling shareholder looks unlikely, perhaps Alitalia could offer a significant minority stake to an airline shareholder with a hub that is not seen as threatening to Alitalia’s hub at Rome Fiumicino. This would not necessarily need to result in the exclusion of Air France-KLM: as a founder member of SkyTeam, partner to Air France in a joint venture on Italy-France routes and partner to Air France, KLM and Delta on North Atlantic routes, Alitalia has strong incentives to retain its relationship with its current 25% owner.

Etihad Airways’ strategy of building an equity alliance with several airlines around the world means that it is linked with almost every carrier that may be seeking new investors. In Aug-2013, Alitalia was reported to be in talks with Etihad over a commercial agreement that could lead to the Abu Dhabi-based carrier taking a stake in the Italian carrier. In Sep-2013, it was reported that a possible 30% stake may have been discussed.

When asked whether his airline was interested in taking a stake in Alitalia, Etihad’s CEO James Hogan said that “at the moment I’m focused on India, transactions in India.” He said Etihad has a strong relationship with Alitalia, adding: “We look at many businesses but we are primarily focused on Jet Airways".

This is well short of a denial and appears to keep the possibility of an investment in Alitalia alive, although it may not be ready to act in the timeframe required by Alitalia for its immediate liquidity needs. This does not rule out an eventual investment by Etihad, whose codeshare with Air France-KLM could facilitate its ability to enter the Alitalia share register alongside the latter.

Etihad could enhance Alitalia’s connectivity to destinations in the Middle East and Asia Pacific, while Alitalia could provide Etihad with additional feed into its network and improved connectivity into Italy. 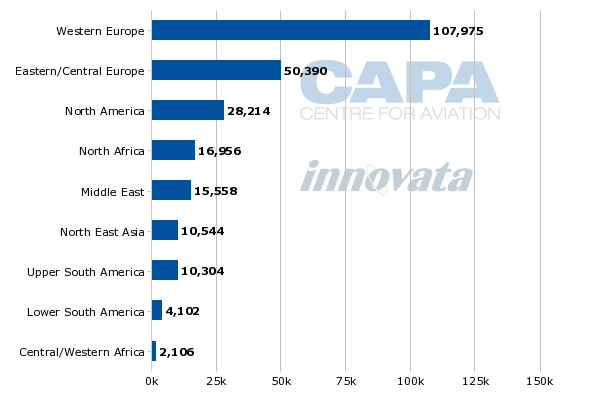 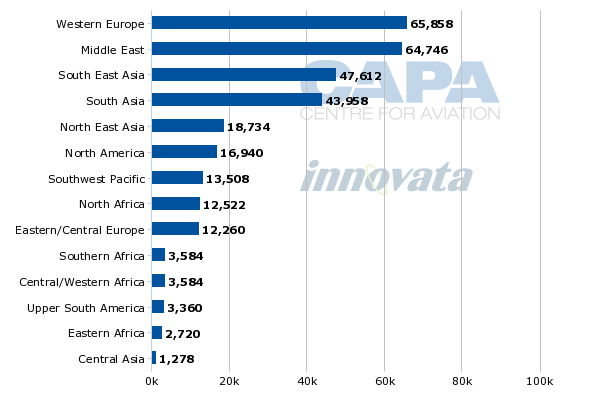 Etihad would likely be prevented from acquiring a controlling stake by ownership and control restrictions (and it typically has not sought full control), but it has experience of developing a close relationship with airlines in which it invests, whereby it provides not only funds, but also clear strategic direction.

Although Air France-KLM seems the most likely airline investor for Alitalia, this is by no means certain after its nominated Alitalia directors opposed the proposed capital increase. This may be a tactical move as Air France-KLM holds out for a longer term solution, or may signal a reluctance to invest when it is focusing on reducing its own debt, particularly if it could create industrial sensitivity at home. Etihad Airways may also be considering acquiring a stake in Alitalia and there could be mutual benefits for both parties and for Air France-KLM.

Neither Lufthansa nor IAG are likely investors, unless Air France-KLM chooses to abandon Alitalia, but there may be other possibilities. SkyTeam partner Aeroflot has been linked in the media with a possible investment, while other SkyTeam partners, such as Garuda Indonesia, China Southern and China Eastern have been linked with other European carriers in recent months and Korean Air has invested in one (CSA Czech Airlines).

For all concerned, the likelihood of a Dutch auction looms. The advantages for a prospective buyer in holding off are clear. The price of buying in is only going to diminish as Alitalia's cash dries up. Nevertheless, it is difficult to see one potential airline investor that could combine a long term horizon with deep pockets, cost cutting credentials, a substantial long-haul network and an understanding of Italian politics.

Short term funding is essential if Alitalia is to survive the year and have a chance to find a longer term supporter. Alitalia has been drinking in the last chance saloon for longer than most, but the next few months could be its final "last" chance.