Alitalia battles for survival in 2013, again, despite operational improvements

In 2012 Alitalia lost EUR280 million, bringing its cumulative net loss to EUR843 million since the ‘new Alitalia’ was created in 2009. In Feb-2013, with its cash reserves almost evaporated, it had to ask its shareholders for a EUR150 million loan to fund its operations. Following the 2012 results announcement, CEO Andrea Ragnetti resigned his position after only a year with the company. A permanent replacement is being sought while chairman Roberto Colaninno takes the controls on an interim basis.

Since 2009, there have been operational improvements, leading to rising load factors and much improved on-time performance, and a major fleet replacement and renovation programme. Unfortunately, these positive developments have not set Alitalia on the path to financial health. Moreover, while its cost base is fairly competitive against full service network carriers, it remains very high cost compared with the short-haul point-to-point LCCs with whom it increasingly competes. Alitalia looks strategically isolated between these two sets of competitors and it now seems unlikely that Air France-KLM will throw it the once anticipated life vest. Loss-making, bleeding cash and currently leaderless, Alitalia faces a battle for survival in 2013.

Another year, another loss for Alitalia (but this time it’s worse)

Alitalia’s losses widened in 2012, with the operating loss growing to EUR119 million from EUR6 million in 2011 and the net loss reaching EUR280 million (EUR69 million loss in 2011). Alitalia is a privately owned company and does not provide detailed accounts and operating data, but the table below summarises the available data.

Alitalia has not made a profit since the new company came into existence in 2009, when a consortium of Italian industrial and financial investors acquired the main flying-related assets of the ‘old Alitalia’ out of bankruptcy. The Italian government was the major shareholder at the time of the bankruptcy. The deal also involved leaving a substantial portion of the debt with the government (although EUR652 million of debt was transferred to the new owners) and the merging of domestic competitor Air One into the new concern.

Air France-KLM then bought a 25% stake in the new entity from the consortium and was given pre-emption rights to buy shares from the other shareholders from 2013. It was expected at the time that the Franco-Dutch group would eventually take control of its Italian partner, but Air France-KLM has recently indicated that it does not intend to exercise these rights since it has its own problems to face. 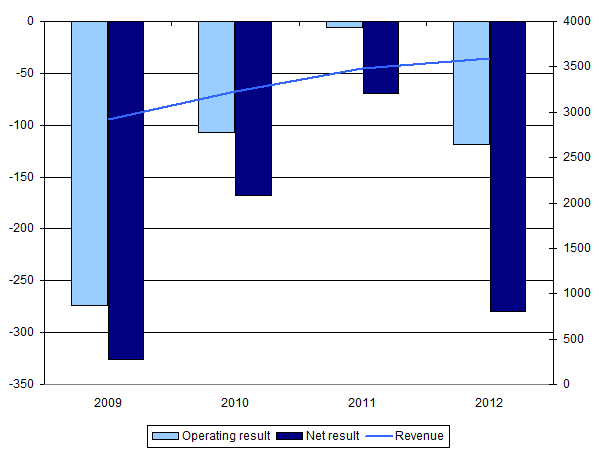 Alitalia has not published details of its revenues and costs, but the press release announcing the 2012 losses states that “2012 was one of the worst years for the European carriers characterized by the financial crisis which invested the Eurozone, and in particular the Mediterranean countries including Italy, where the recession has proven to be deeper and longer than expected, causing a substantial decrease in the demand.”

Alitalia’s liquidity reached crisis point at the end of 2012

Perhaps not surprisingly, given the ongoing losses, Alitalia’s net debt has grown steadily from 2009 to 2012, when it reached more than EUR1.0 billion (growing by EUR174 million through 2012). This has happened in spite of aircraft-related debt falling over the period 2009 to 2012, suggesting that increased borrowing has been in order to fund working capital.

Worryingly, Alitalia’s liquidity position deteriorated to only EUR75 million at the end of 2012 (from EUR326 million at the end of 2011). This is defined as cash, cash equivalents and unused credit lines and the figure was equivalent to only just over a week of revenues, a very inadequate cushion. Alitalia has been through a significant fleet replacement programme since 2009, but, since its fleet is largely leased, its worsening liquidity is mainly due to poor operating cash flow.

Recognising the perilous nature of its finances, Alitalia proposed in Feb-2013 that its shareholders subscribe to a loan of up to EUR150 million, in proportion to their shareholdings. The loan is convertible into shares after one year and up to 2015 (when the loan will automatically convert into shares). Shareholders representing 12% of the total voted against the proposal, suggesting that a maximum of EUR132 million was raised. Whether this sum will be sufficient remains to be seen, but, given the EUR174 million cash burn through 2012 and the very low level of liquidity before the loan, the carrier will remain financially on tenterhooks. 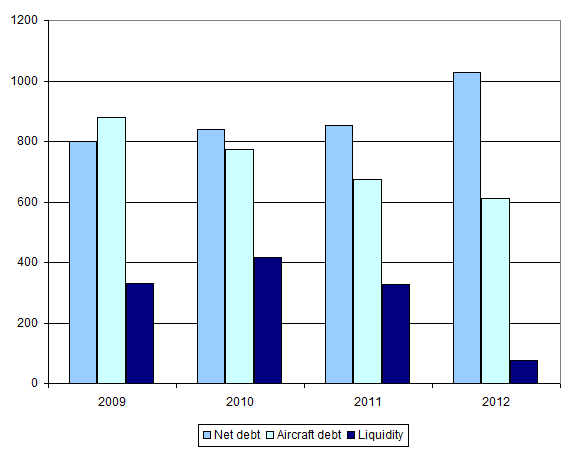 Passenger growth has been modest, but load factors and on-time performance have climbed

Nevertheless, Alitalia load factors continue to lag the AEA average of 79.1% for 2012. This may reflect Alitalia’s higher proportion of capacity on domestic routes (18% of ASKs vs 6% average for AEA member airlines), where load factors tend to be lower, but also points to further potential for improvement. Alitalia has also seen a positive trend in on-time performance since 2009, when its record of punctuality was one of the worst in Europe, and it aims to rank first on this measure in 2013.

Alitalia’s subsidiary Air One, which operates from Milan Malpensa, Pisa, Venice and Catania, saw passenger numbers grow rapidly in 2012, from 1.4 million in 2011 to reach 2.0 million (up 45%). Primarily a domestic carrier (83% of its seat capacity), it also operates to destinations in central Europe and north Africa. Air One is aimed at the lower cost and leisure segments of the market. 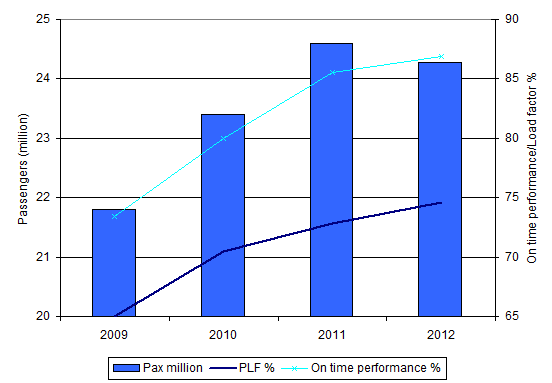 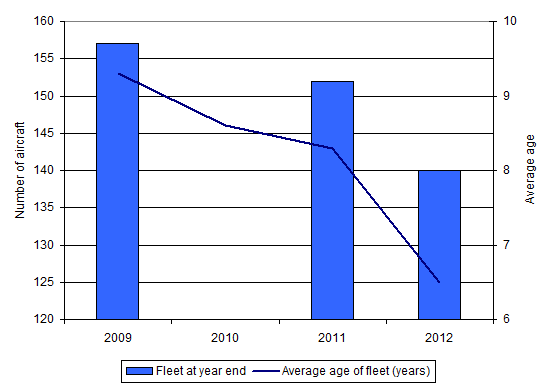 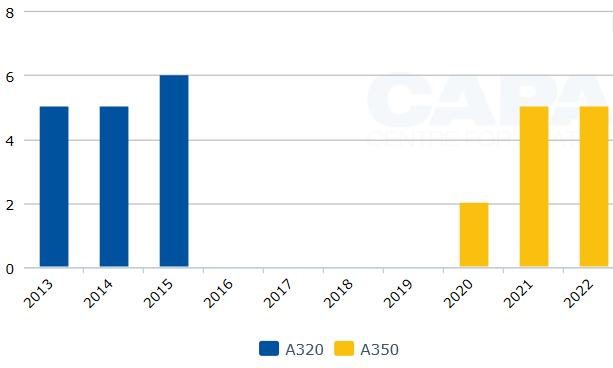 Alitalia remains the largest airline in Italy by seat capacity, according to the Innovata database for 04-Mar-2013 to 10-Mar-2013, with a 24% share. This rises to 29% for the group (including Air One and Alitalia Express), ahead of Ryanair on 19% and easyJet on 11%. Given the superior load factors of the latter two, the market share gap between them and Alitalia is likely to be less in passenger terms.

Focusing on the domestic Italian market, the Alitalia Group is still clinging onto a seat capacity share of just over 50%, but this has fallen from more than 52% in 2009 and is likely to be well under 50% now in passenger terms. LCCs Ryanair and easyJet have both seen their share increase since 2009, with Ryanair in particular benefiting from the demise of Wind Jet in 2012.

See related article: The failure of Italy's Wind Jet could prove to be a windfall for Alitalia

Alitalia’s joint venture with Air France and membership of SkyTeam’s North Atlantic JV with Air France, KLM and Delta mean that it is very much a junior partner when it comes to direct long-haul services. 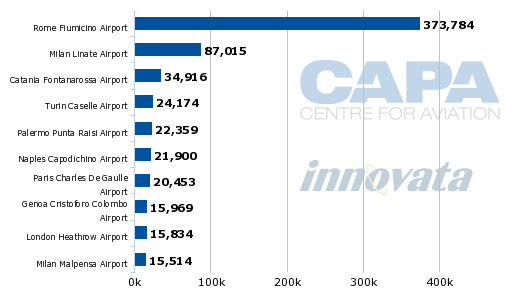 Alitalia is Fiumicino’s biggest airline, with 46% of seat capacity, rising to 49% for the Alitalia Group when Air One Smart Carrier is included. LCC easyJet is number two on 8% 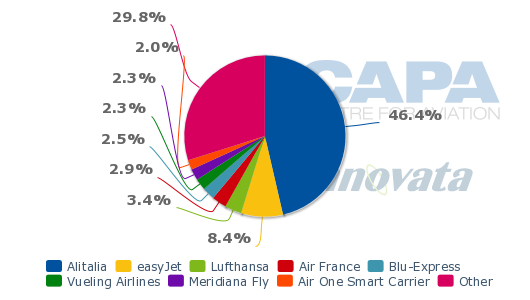 Most of Alitalia’s top routes by seats are domestic

Alitalia’s biggest route by seat capacity links its Rome hub to its base at Milan Linate. Its other key routes from Rome Fiumicino are domestic links to its bases at Catania, Turin and Venice and also to Palermo. Its most important international route is to the Paris CDG hub of SkyTeam partner and 25% Alitalia shareholder Air France-KLM, followed by Rome to London Heathrow. Outside Europe, its most important route by seats is Rome to New York JFK, followed by Rome to Tokyo Narita. Alitalia also operates Milan Malpensa to Narita and Rome to Osaka.

Other important intercontinental routes include Latin American destinations Rome to Buenos Aires, Sao Paulo, Rio de Janeiro and Caracas. Its most important North Atlantic routes aside from JFK are Rome to Miami and Toronto.

Apart from the Rome to Milan Linate route, the latter base does not feature in Alitalia’s biggest domestic routes and only Milan-Paris CDG and Milan-London Heathrow feature in its top 10 international routes. 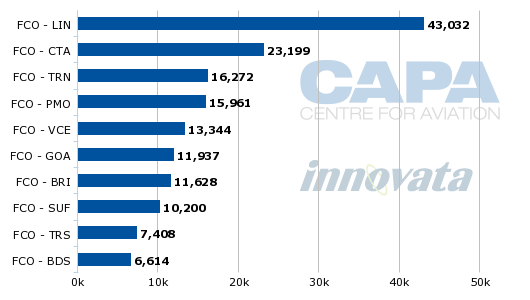 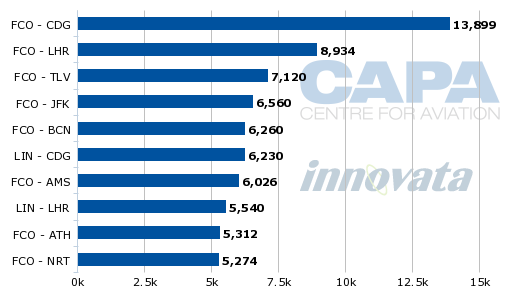 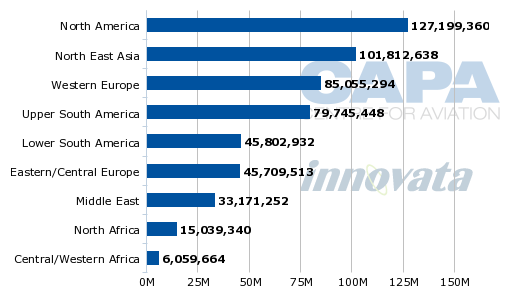 At its Milan Linate base, Alitalia has a seat capacity share of 39%, rising to 48% with Alitalia Express, and LCCs are largely excluded from the airport. However, LCCs have a strong share at Milan Malpensa, where the Alitalia Group’s share of seat capacity is just 9%, giving it a 23% share of the two Milan airports combined seats.

If Bergamo is also included, now referred to as Milan Bergamo, where Ryanair’s seat capacity is larger than that of the Alitalia Group at the other two Milan airports combined, then its share of the three airport system is only 18%. 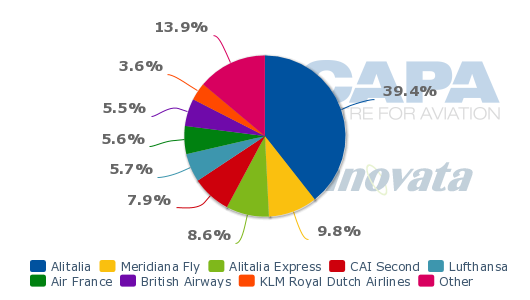 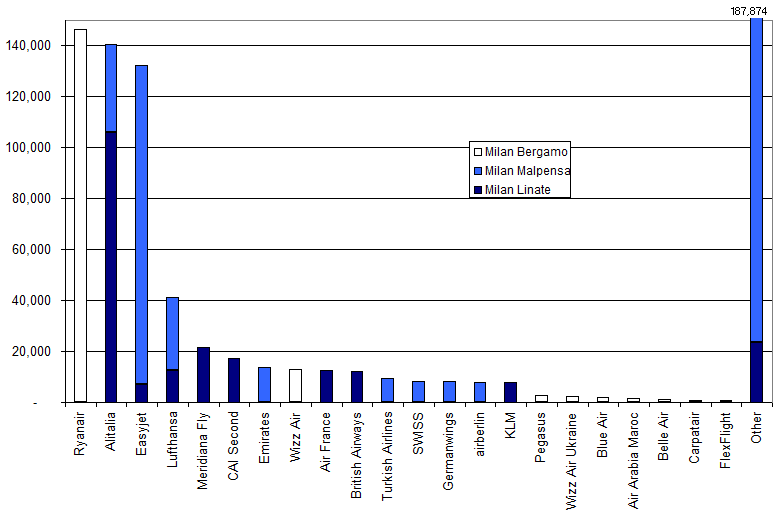 This may be partly due to modest sector length growth. The trend in revenues per passenger has remained positive throughout the period, but this has not been sufficient to restore profitability and unit costs will need to be an area of focus in 2013. 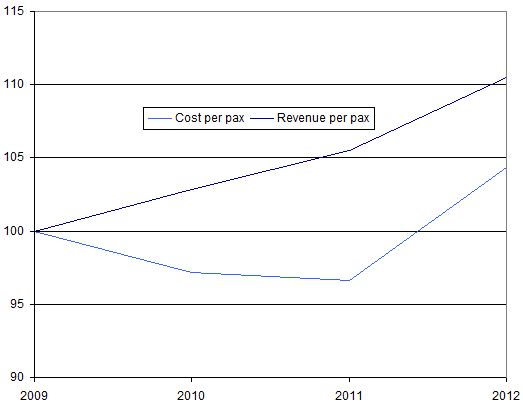 Cost per passenger looks competitive against FSCs, but not against LCCs. A tough assignment for a new CEO

As noted earlier, it is not possible to calculate CASK, which, together with a comparison of average sector lengths is the usual measure for comparing unit costs among airlines. Nevertheless, an analysis of Alitalia’s cost per passenger and average sector length against those of other European carriers shows that its cost base is quite competitive against other full service carriers (see chart below). Given an average sector length at the low end of the scale for FSCs, its cost per passenger is also at the low end of the scale and actually below the line of best fit for FSCs.

Having said that, its average sector length is much closer to the LCCs, but its cost per passenger is significantly higher than theirs are. This shows it to be somewhat stuck in a strategic no-man’s land: neither truly a network carrier with a significant long-haul operation, nor truly short-haul point-to-point with a competitive cost base. Moving in either direction presents significant hurdles: up the average sector length curve and making use of a lower cost base, or down the curve into short-haul. 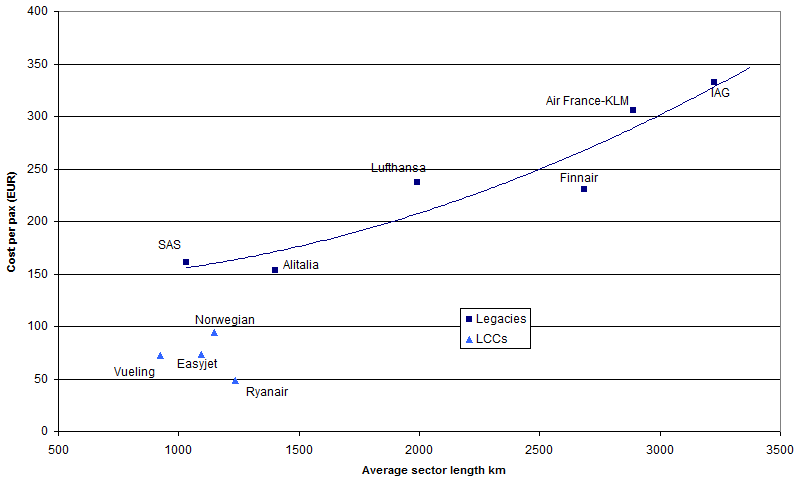 Alitalia plans nine new international routes this summer in its medium-haul network and, on the long-haul, it is increasing frequencies on its New York service and evaluating possible new routes to South Africa and Latin America. However, with a widebody fleet of only 22 aircraft, it will continue to rely on alliance and codeshare partners to reach a large part of the globe. As for a more short-haul strategy, its cost base still has a lot of trimming to be done and it has been gradually losing market share over time.

Alitalia’s ‘caught-in-the-middle’ strategic positioning, coupled with weak finances, will present an enormous challenge to its next CEO, when he or she arrives. Restructuring on a large scale would appear to be unavoidable – but that will not be without considerable pain, at a delicate time in Italy's political evolution.