airberlin’s losses widened in 1Q2013 on restructuring costs, but the message from CEO Wolfgang Prock-Schauer is that today’s pain will lead to tomorrow’s gain as the group’s “Turbine 2013” restructuring programme starts to show in the results.

Capacity cuts, network refocusing, headcount reductions and supplier renegotiations are all under way and the positive impact should be more visible from 3Q2013 onwards. Meanwhile, codeshare relationships with Etihad and oneworld partners are delivering growing passenger numbers.

Etihad, airberlin’s 29% shareholder and benefactor, has ploughed close to EUR500 million of cash into its German partner since last year. airberlin’s efforts on many fronts will need to translate into profits and a strengthening of airberlin’s flimsy balance sheet if Etihad is to see a return. Etihad's network traffic feed has been stimulated by the partnership, but it will want to see airberlin profits in due course.

airberlin widened its operating loss in 1Q2013, reporting a loss of EUR188 million at the EBIT level, EUR39 million worse than the loss reported for the same period a year ago. airberlin says that the underlying EBIT loss, excluding charges relating to the turnaround programme this year and other extraordinary items, was EUR171 million, more or less level with last year’s EUR173 million loss. The net loss of EUR196 million was EUR35 million worse than last year. Revenues fell by 3%, much less than the 11% fall in ASKs, to EUR792 million.

The decline in traffic was less than the cut in capacity, with RPKs falling by 8%, so that load factor gained 2.7ppts to reach a very high 85.6% (and load factor gains have continued beyond the end of the quarter: April saw load factor increase by 4.2ppts to 84.0%).

This tighter capacity helped to boost average flight revenue per passenger by 6% to EUR116.2 in 1Q2013, more than the 1% increase in average flight distance. Capacity cuts were particularly focussed on short-haul routes. 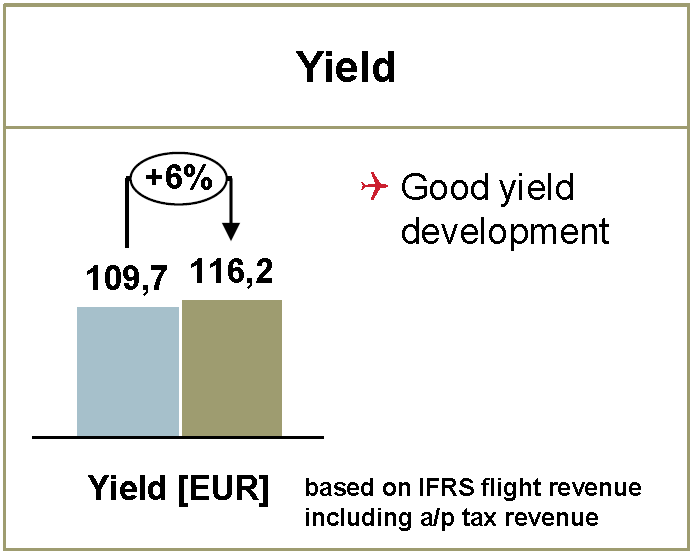 A combination of higher yield and higher load factors drove airberlin’s RASK up by 9% year-on-year. Unit revenues benefited from capacity cuts, but also by increasing the focus of the network on key routes that attract higher yielding passengers and cutting marginal routes. RASK was also helped by a new revenue management system implemented in 2012 and the growth in passengers from codeshare partners (see below).

However, while capacity cuts help unit revenue growth, they put strain on cutting unit costs. airberlin’s CASK grew by 12% year-on-year in the quarter and its ex fuel CASK grew even more, up 14%. Excluding EUR25 million of charges related to the introduction of the group’s “Turbine 2013” turnaround programme and other extraordinary items, CASK grew by 9%, in line with RASK growth, and ex fuel CASK grew by 10%.

The company’s “Turbine 2013” programme helped to keep operating costs flat on last year. Without the charges related to implementing the programme, there would have been a small decline in total costs. Fuel costs, which accounted for almost 31% of costs in the quarter, fell by 4.6%, less than the cut in capacity. Operating lease charges were the same as last year, while capacity and the fleet were cut, the reductions focused on owned aircraft. Airport and air navigation charges fell, but not as much as the cut in capacity. Aviation taxes fell by almost 11%, more than the drop in passenger numbers. This reflects the higher proportion of long-haul connections versus domestic connections, which were cut more heavily due to aviation taxes.

Labour costs increased by 2%, in spite of a 2% fall in headcount and lagging the cut in capacity, but airberlin says they are “in progress of adjustment to lower production levels” and will be reduced later in the year. Under the Turbine 2013 programme, headcount will reduce by around 250 full time equivalents by the end of May. Executive headcount has been reduced by 40 and pay cuts have been implemented. Negotiations are ongoing with unions over pay and working practices.

Technical costs increased by 16% as additional maintenance charges were incurred in relation to aircraft leaving the fleet. Advertising costs fell, partly reflecting a structural move away from traditional forms of advertising to embrace web-based communications and partly reflecting the benefit of codeshare partners relieving some of the burden on joint routes. 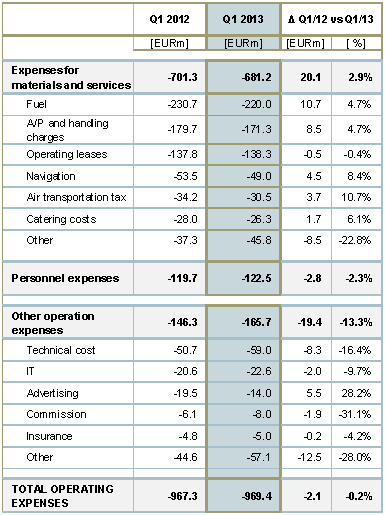 airberlin’s codeshare with Etihad, its main strategic partner and 29% shareholder, consists of nearly 100 routes and the two plan to add further routes on approval of traffic rights. They have 170 joint corporate contracts to attract business travellers. airberlin also plans to add codeshare agreements with Etihad partners such as Virgin Australia and Serbian carrier JAT in 2013. 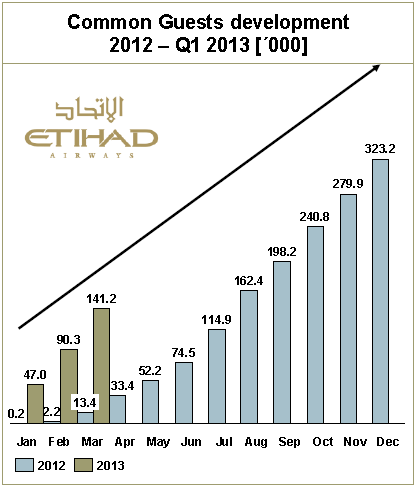 Between Germany and Etihad’s Abu Dhabi hub, airberlin flies from both its main hubs Berlin Tegel and Düsseldorf, while Etihad only operates the latter route. Berlin to Abu Dhabi is a monopoly route for airberlin, while Düsseldorf is a duopoly with airberlin having around 30% more seat capacity than its partner. This arrangement gives airberlin access to Abu Dhabi and beyond from two airports in Germany, but does not (yet) provide it with feed into its Berlin hub. 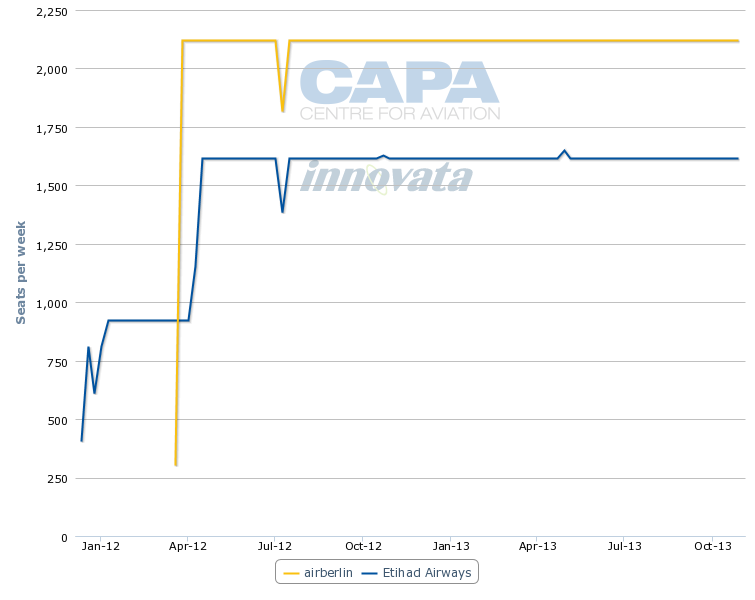 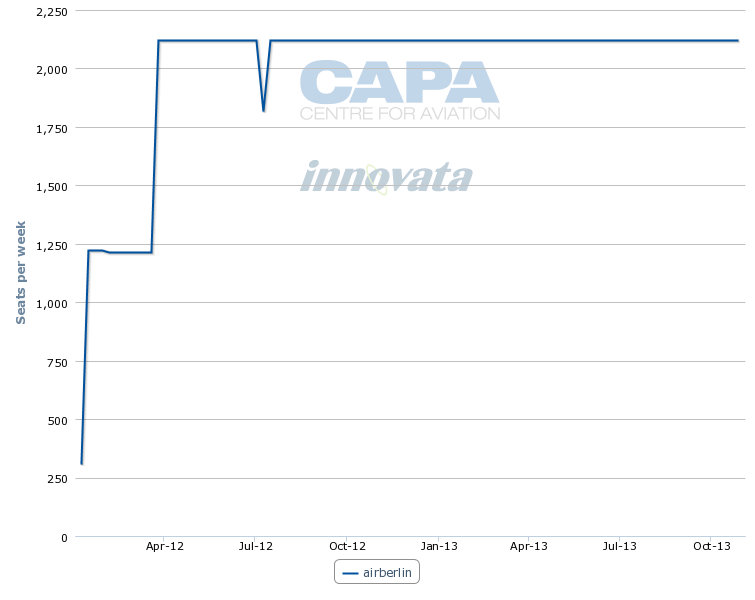 Etihad also flies to Frankfurt, with more than twice Lufthansa’s seat capacity, and Munich, where it is the only operator from Abu Dhabi (with less than half the capacity it has to Frankfurt). Overall, Etihad is the biggest airline between Germany and Abu Dhabi and airberlin is number two. Lufthansa is a distant third and its capacity is dwarfed by the combination of the other two. 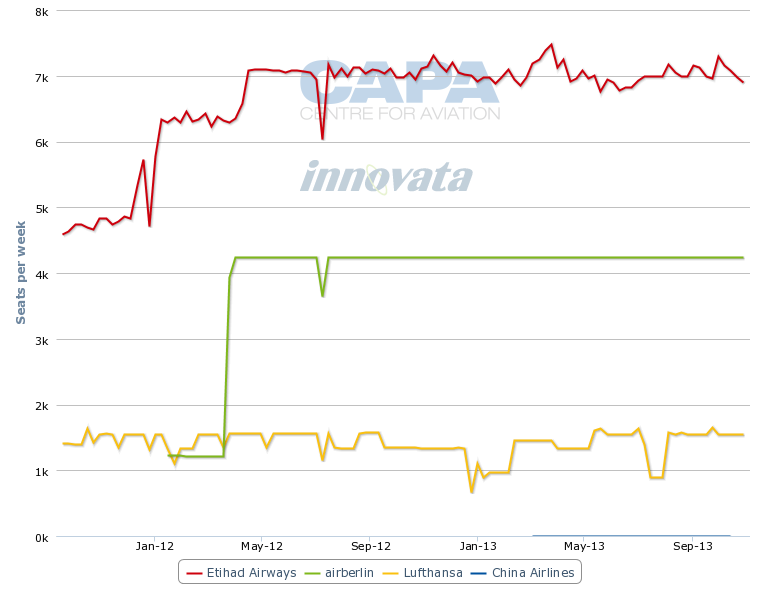 Emirates dominates Germany to the Gulf

The picture is a little different if Abu Dhabi’s neighbouring hub of Dubai is included. Between Germany and the UAE, Emirates has more than three times the seat capacity of second placed Etihad and twice the capacity of the combined Etihad/airberlin.

Lufthansa, in third, is closer to the two partners than on Germany to Abu Dhabi, but only has around half of their combined capacity on Germany to UAE. 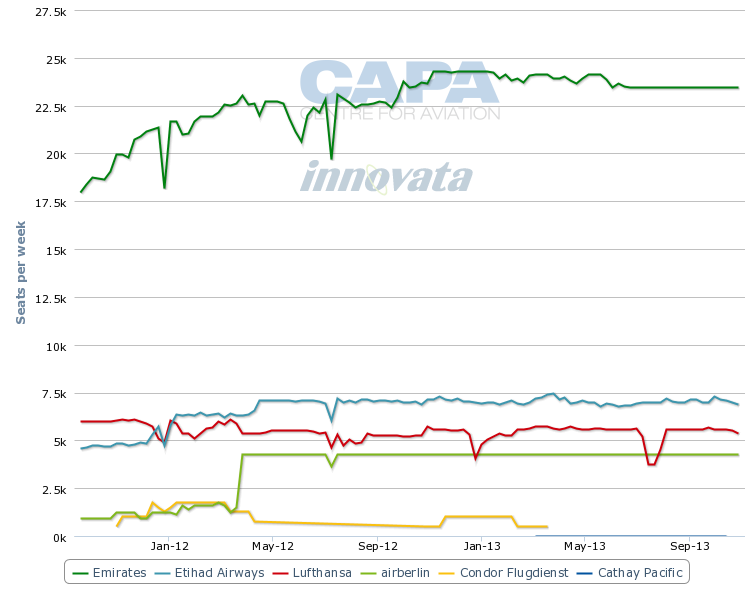 If the picture is widened further to include Qatar and the hub of the third of the Big Three Gulf carriers, the combined airberlin/Etihad are a distant second behind Emirates, ahead of Qatar Airways in third and Lufthansa is pushed down to fourth.

The dominance of Emirates, which operates to four airports in Germany (Frankfurt, Munich, Düsseldorf and Hamburg) suggests that airberlin and Etihad will look to increase their capacity and possibly add to their three airports (Berlin, Frankfurt and Düsseldorf). Whether airberlin will look to supplement its Etihad codeshare with some form of Qatar Airways partnership once the latter joins oneworld in 2014 remains to be seen, but it probably makes sense to focus on one Gulf hub and not to risk the wrath of Etihad.

Lufthansa also may well be increasingly tempted to add capacity to the Gulf, even at the risk of cannibalising its own hub connections into Asia-Pacific. It has been reported that Emirates may be open to a partnership with Lufthansa and CEO Tim Clark has certainly been highly conciliatory in public recently.

The message for airberlin is that, while the Etihad codeshare is delivering benefits and strengthens its position on routes to the Gulf and beyond, the competitive landscape is constantly changing and the partnership still needs more volume.

Seat capacity between Germany and United Arab Emirates/Qatar by airline group: 13-May-2013 to 19-May-2013 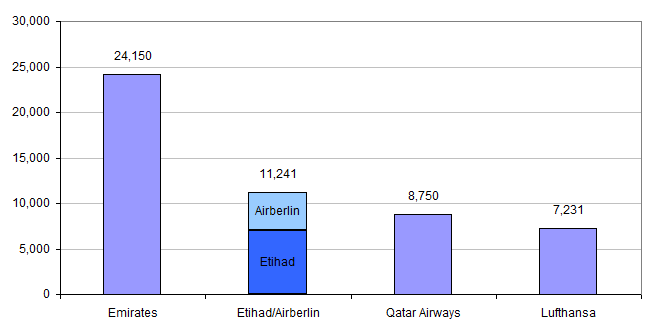 airberlin’s entry into oneworld is also producing traffic benefits. Common passengers with oneworld partners amounted to 103,100 in 1Q2013, compared with 56,100 in 1Q2012. Co-operation with American Airlines has been expanded to include AA’s Chicago hub. 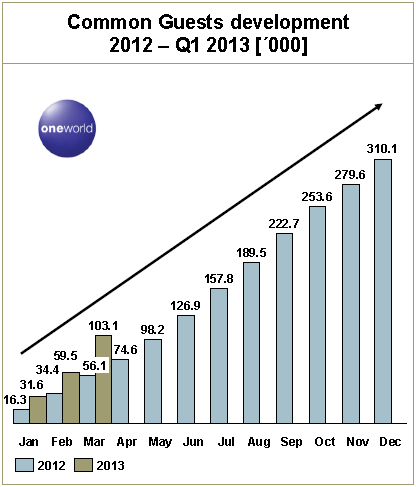 At 149 aircraft, airberlin’s fleet was smaller by 16 aircraft at the end of Mar-2013 compared with a year earlier. Numbers will remain broadly stable through the summer season, but the group plans to cut the total to 143 by the end of 2013 as four A320 family and three 737 family aircraft exit the fleet, partially offset by the addition of one A330.

airberlin says that the group’s Turbine 2013 cost reduction programme has already secured two thirds of its planned earnings improvements for 2013. In terms of positive EBIT impact compared to 2012, the target is for more than EUR200 million this year, with most of the effect from 3Q onwards, and a cumulative EUR400 million by the end of 2014. The benefits will come both from internal factors, such as network and fleet, commercial, product/service and operations, and from external negotiations with suppliers.

For 2013 as a whole, airberlin continues to plan for a capacity increase on long-haul and a decrease on short-haul, with load factor increasing. In spite of capacity cuts, it expects revenues to grow and ex fuel CASK to decrease as structural cost increases are offset through the Turbine programme.

Its overall target remains to achieve breakeven at the operating level in 2013. For the balance sheet, it aims to lower its gearing and bring net debt down to around EUR500 million by the end of the year.

Turbine programme must succeed before Etihad turns off the tap

Looking beyond this, airberlin’s relationship with oneworld and, in particular, Etihad will be crucial. Both provide feed to Etihad and a wide network of destinations to its passengers, but it is no exaggeration to say that Etihad has provided airberlin with its very life blood.

Since early 2012, Etihad has provided airberlin with around EUR490 million in cash through a direct investment, its purchase of a majority stake in airberlin’s FFP, the provision of a loan facility and its share of the recent convertible bond issue. The latter, which raised EUR140 million in total, would almost certainly not have been possible without Etihad’s backing. At the end of Mar-2013, airberlin had EUR470 million in cash, providing much greater security - entirely thanks to Etihad.

The ball is now in airberlin's court to deliver on its Turbine programme , something Abu Dhabi management will be watching closely.