airberlin: in need of a cap that fits after another underlying loss

Air Berlin PLC returned to a net profit in 2012 for the first time since 2007. However, if the one-off proceeds of the disposal to Etihad of 70% of its topbonus FFP are excluded, the operating result would have been a loss of EUR114 million. This is a narrower figure than 2011’s shocking EUR247 million loss, helped by airberlin’s entry into oneworld and its deepening strategic partnership with Etihad.

Wolfgang Prock-Schauer, CEO since Jan-2013 after only joining the company in Oct-2012, rightly assesses that “we have not yet reached our goal – namely sustainable profitability”.

airberlin's cost structure is quite low versus European legacy carriers, but not LCCs, but its revenue base is too close to LCC levels. Thus the airline must simultaneously reduce costs and grow revenues. Further capacity cuts and another efficiency programme are under way, but much will depend on the further successful development of its relationship with oneworld and, in particular, Etihad.

After years of trying on every cap – charter carrier, LCC, full-service carrier, short-haul, long-haul, M&A predator and prey – airberlin needs to find one that fits.

A profit in 2012, but still a loss if FFP sale is stripped out

The net and operating results benefited to the tune of EUR184 million from the sale of a majority 70% stake in the frequent flyer programme topbonus to Etihad Airways. This means that the underlying operating result was a loss of EUR114 million, rather than the profit reported (albeit a smaller loss than the previous year) and the underlying net result was also negative.

Will Etihad be asked to provide more capital?

The group’s balance sheet looks very undercapitalised, although net debt came down from EUR813 million to EUR770 million and the group hopes to reduce it further, to around EUR500 million, by the end of 2013. Its 2012 net debt figure was almost six times its book equity and, adding in operating leases at eight times annual rentals, the adjusted net debt figure of EUR5.5 billion is a staggering 42 times book equity of EUR130 million.

When Etihad increased its holding in airberlin from 3% to 29% in early 2012 (providing EUR73 million of fresh equity capital), it also arranged debt financing of USD255 million with a term until Dec-2016. This ensured the group’s medium term survival, but its operating cash flow remains negative and it has 66 aircraft on order.

Etihad also provided EUR184 million of a 70% stake in the group’s FFP topbonus, but it would not be a surprise if Etihad is asked for more at some stage.

airberlin has transformed itself many times

airberlin has been through a number of phases in its history, emerging from its background as a charter carrier taking Germans on holiday, then adding scheduled traffic with a holiday destination focus, then focusing on scheduled services and adapting the ‘LCC’ tag, then adding long-haul and developing alliances and partnerships and embracing the ‘full-service carrier’ tag.

It is Europe’s seventh largest airline by passenger numbers and the number two in its core market of Germany, Austria and Switzerland.

Development of airberlin seats and passenger numbers: 1992 to 2011

Although it operates a long-haul network, around one third of its seat capacity is domestic and 80% of passengers are on its European routes. Its largest ex Europe market (by seats) is the Middle East, not surprising given its Etihad relationship, followed by North Africa and North America. 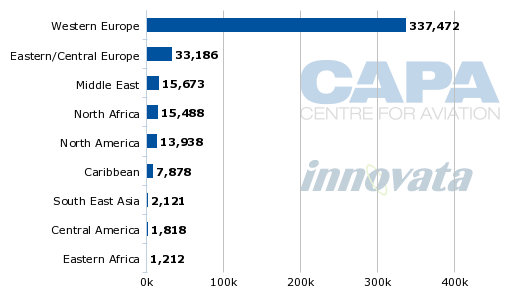 The group’s cost savings programme, launched in 2011 and named ‘Shape and Size’, contributed EUR250 million of bottom-line effects in 2012, according to the company. Since the launch of this programme, additional factors including the continued difficult economic environment, aviation taxes, fuel prices and the delays in opening the new Berlin airport have prompted the company to implement an additional programme aimed at structural changes to adapt the business model.

This initiative is called ‘Turbine’ and aims to have a positive impact of more than EUR200 million in 2013 and EUR400 million in 2014. airberlin Group expects a reduction in unit cost ex fuel in 2013.

Labour productivity deteriorated in 2012, but should be addressed in 2013

airberlin has a reasonably productive workforce compared with other European carriers, although 2012 saw deterioration on the key measures of employee costs per employee and revenue per employee.

In 2013, airberlin is taking measures to improve labour productivity. For example, the group plans to consolidate the number of crew stations in Germany. It currently has 15 stations and is reviewing six of these. The company is also looking for productivity gains through seasonal adjustments, which are under negotiation, to agree secondments with Etihad and other partners and to reduce headcount by 180 full time equivalents in 1Q2013.

Overall, Mr Prock-Schauer has identified around 900 posts to be eliminated, roughly 10% of the workforce.

Fleet reduction is to continue

Eight new aircraft will enter the fleet, but 20 will exit following lease expiry/early termination. At the end of 2012, the average age of the fleet was 5.2 years, making it one of the youngest among European network carriers. 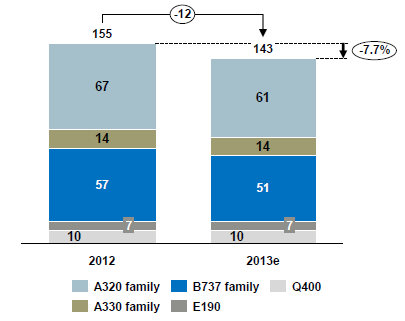 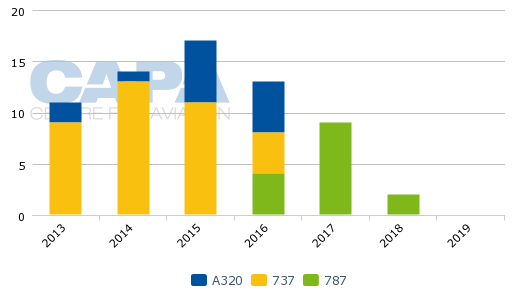 Etihad is airberlin's largest shareholder, with a 29% stake, and is also its number one codeshare partner, with codeshares on close to 100 routes. Through airberlin's hubs at Berlin and Düsseldorf, Etihad has access to more than 50 destinations from Abu Dhabi. As an EU airline group, airberlin could not be controlled by a non-EU national, but the relationship with Etihad seems as close to a takeover as could be achieved, especially given the financing dimension (see earlier).

The two carriers are working on a number of areas for future synergies, including the harmonisation of product standards; joint procurement of seats and IFE for the Boeing 787; joint marketing; joint placement of insurance contracts, fuel tendering and lessor negotiations; and operational cooperation such as pilot exchanges, joint training and common cargo operation from Abu Dhabi.

According to airberlin, the strategic partnership with Etihad involved 323,000 ‘common guests’ in 2012 and generated EUR50 million of additional revenues for airberlin in 2012. 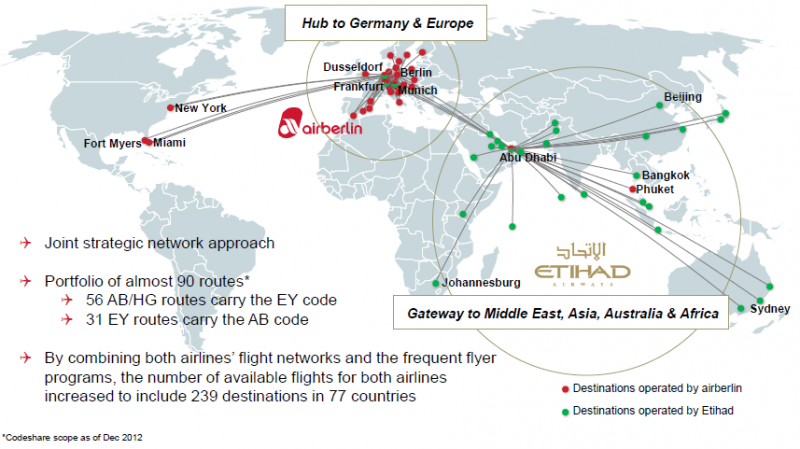 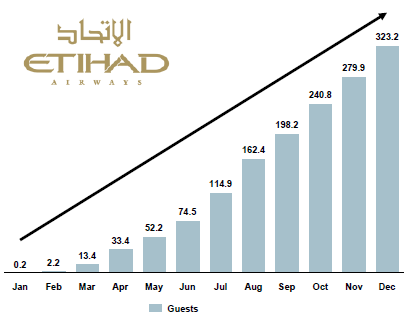 airberlin's entry into oneworld saw it benefit from a similar number of ‘common guests’ as were involved in its Etihad codeshare. Although airberlin has not said how much additional revenue this brought the company, it seems reasonable to assume that it may have been of a similar order of magnitude.

Nevertheless, it appears that its involvement in oneworld, whose other members have only a small presence at airberlin’s Tegel and Düsseldorf hubs, is more tactical and opportunistic than its more strategic involvement with Etihad. 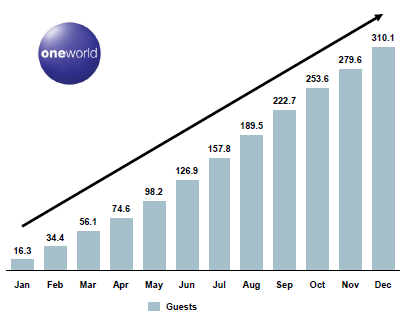 In 2012, airberlin plans to cut the number of flights and seats by around 5%, with ASKs down by the lesser amount of 3%, reflecting a focus on growing long-haul. Short-haul capacity (flights, seats and ASKs) will be down 12%, medium-haul down 4%, but long-haul will see an increase of more than 10% to reach more than one quarter of the group’s capacity. It expects load factor and yield improvement as a result of capacity cuts and greater partner traffic.

As a result, airberlin expects revenue growth in spite of capacity cuts in 2013. Its overall financial target for 2013 is to reach “operational profitability”.

Through refocusing the network on core markets with higher frequencies and better utilisation of the hubs at Berlin and Düsseldorf and further building codeshare activity, airberlin aims to improve asset utilisation in support of a more cost efficient operation in 2013. Berlin will see the group build on its Eastern Europe activities, while Düsseldorf will see growth in the North American business.

Palma de Mallorca, where airberlin is number one with 40% of seat capacity, will see additional flights and Vienna will see added leisure capacity through group company NIKI.

Track record of profitability is weak as CASK has outgrown RASK 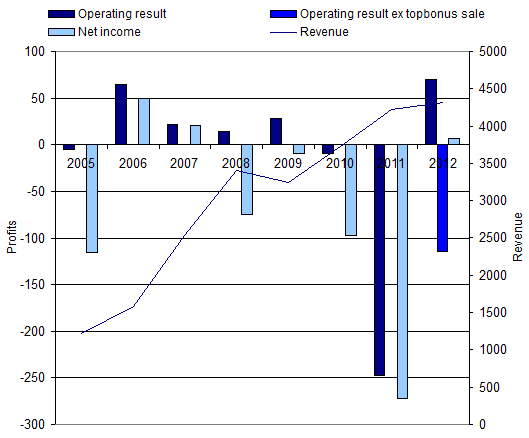 airberlin's highest operating result, EUR64 million came in 2006, the year of its IPO. Since then it has struggled to breakeven and has made three operating losses (including 2012 if the disposal gain on the topbonus FFP transaction is deducted from the reported profit). The chart below illustrated the development of unit revenues (RASK) and unit costs (CASK) since 2006. The company has experienced significant growth in RASK over the period, up 30%, in spite of a fall in 2010.

The problem airberlin has faced is that CASK has grown faster – up 39% since 2006. Even ex fuel CASK has grown by 34%, so the rise in unit costs cannot be blamed on fuel. Moreover, airberlin’s average sector length has increased over the period and CASK is typically lower the higher the sector length. The group already has a relatively productive work force, but it will need to improve this further and focus strongly on costs other than fuel and labour. 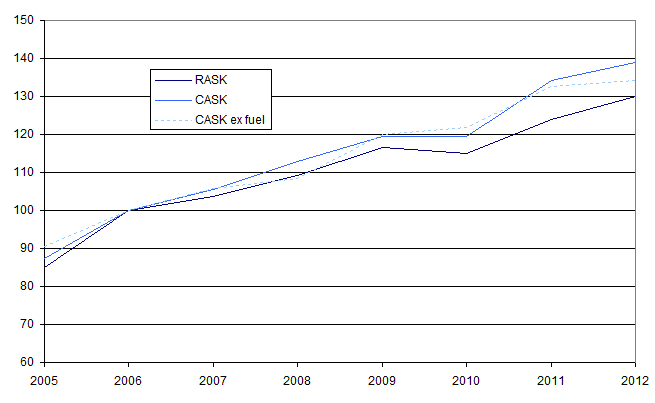 Cost structure is efficient, but not low enough given RASK pressure

Comparing airberlin's unit costs and sector length with those of other European airlines, the chart below shows that it is relatively cost efficient compared with many legacy carriers with a similar average sector length. However, compared with the nearest comparable carrier in sector length, Aer Lingus, it has higher unit costs and, as we have seen, its CASK has grown for a number of years. Moreover, its strong short-haul dependence brings it into significant competition with the LCCs and its unit costs are significantly higher than theirs.

Having a cost structure that is below those of the major legacy carriers ought to allow profitable operations, but this requires that unit revenues are sufficiently strong. As noted above, airberlin has not been able to grow RASK fast enough to cover increases in CASK since 2006. 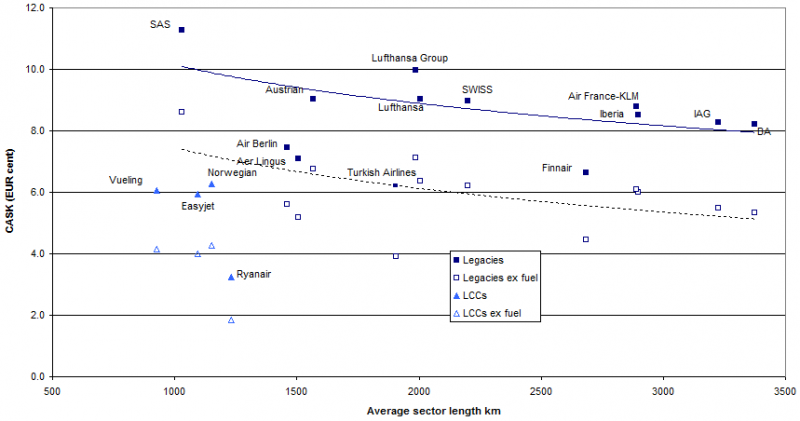 airberlin's difficulty is perhaps best illustrated simply by comparing its average cost per passenger and revenue per passenger, against average sector length, with other carriers. Looked at this way, its cost base is between the LCCs and the legacy carriers, but its revenue base is much closer to the LCCs.

The need to improve this weak revenue structure explains airberlin’s moves to develop alliances and partnerships, to improve product quality and to cut capacity. The dilemma is that these developments can also add to unit costs.

The carrier now appears to have set course on a long term direction, with partners in place and a more focussed plan. But it will not all be plain sailing. 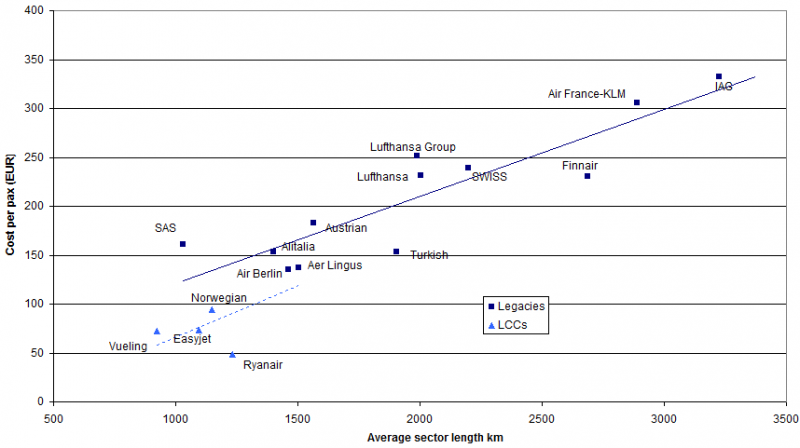 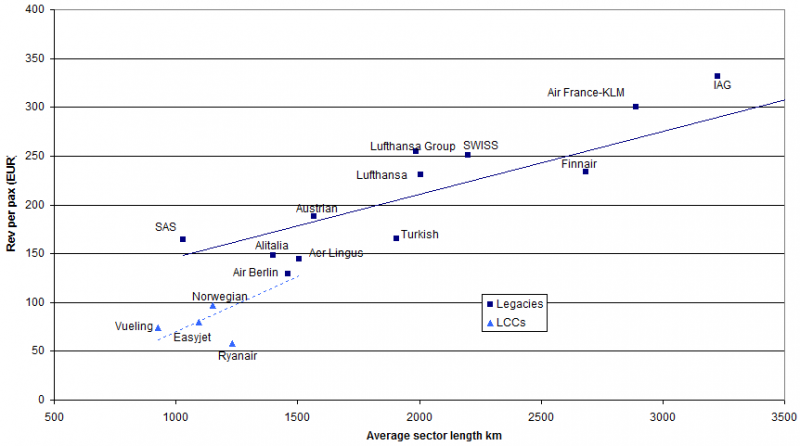