Air Berlin, Germany’s second-largest airline group and oneworld member elect, announced it would cut capacity and fleet as part of a restructure following a widening in operating losses in the second quarter amid a sharp rise in fuel costs, the impact of Germany’s new travel tax and disruptions in key North African markets. Long-time CEO Joachim Hunold will resign. The company faces a gloomy outlook for the second half, warning it may fail to finish the year with a profit at the operating level.

Air Berlin reported a net loss of EUR43.9 million in the quarter, an improvement over the 2Q2010 EUR56.9 million net loss thanks to a EUR35.5 million tax benefit. Net loss for 1H2011 widened to EUR165.5 million, from EUR159.6 million in 1H2010. Mr Hunold announced a "Size & Shape" programme, to re-structure the business. The raft of measures include route cuts, fleet reduction and a network overhaul. The board accepted the resignation of Mr Hunold, who has led Air Berlin for 20 years and believes a change in leadership is needed to expedite the restructuring. Mr Hunold will remain as a non-executive director of the board. Air Berlin announced the interim CEO appointment from 01-Sep-2011 of Hartmut Mehdorn, a former CEO of Germany railway company Deutsche Bahn and Airbus board member.

“After a weak start to the year, we are not satisfied with the second quarter", Mr Hunold said, adding that high levels of competition, Germany’s aviation tax, fuel price increases and unrest in key North African markets as part of the Arab Spring were the major reasons for the poor result. “In reaction to this and in order to increase our profitability, we have created an extensive package of measures that will take effect in the short-term to limit the negative influences of the distortions in competition,” the outgoing CEO said. “Nevertheless, is not likely that we will be able to return to black EBIT figures in FY2011" he said, reversing the airline’s previous guidance of a positive operating result in the current year.

Consolidated revenue in the quarter increased 16.5% to EUR1.12 billion, outpacing the 8.8% gain in passenger numbers to 9.55 million, but still “lower than planned” the airline said. Political upheaval in key North African leisure markets, which sapped demand for travel, and Germany’s air travel tax were listed as the main reasons for the weaker-than-expected top line result. High competition across its network made passing on the costs of the aviation tax to customers extremely difficult, the airline said. 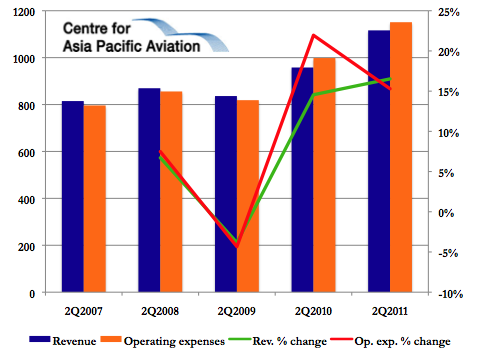 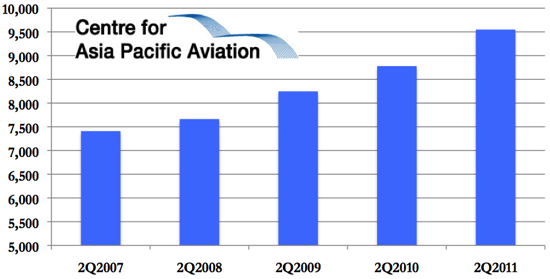 The government’s air travel tax was highlighted as a major threat to revenue growth, with the CEO stating it had caused major “distortions in the competitive environment”. There is increasing evidence of German travellers living near international borders flying out of foreign airports to avoid the German travel tax. Most significantly, this trend includes major demographic centres such as Düsseldorf in the Rhine-Ruhr region, home to approximately 18 million people, and the Munich region, home to four million people.

Whereas Air Berlin mainline, with revenue of EUR1.8 billion in 1H2011, had to pay approximately EUR74.4 million (4.1% of the revenue) of aviation tax, Mr Hunold stated its "largest competitor, with total revenue of EUR14.1 billion, only had to pay EUR162 million (1.15% of the revenue)". Mr Hunold called for the government to end the tax, saying, "The aviation tax together with the existing competitive pressure makes it impossible to, eg, pass on the increased kerosene price to the customers in its entirety. In order to prevent further damage to the already low-margin airline traffic in Germany, the aviation tax should be abolished as quickly as possible."

Total operating expenses increased 15.3% to EUR1.15 billion. Fuel costs rose 34.4% in 2Q2011 to EUR277.2 million, accounting for 28.2% of total operating expenses, up from 23.5% a year ago. Other materials and services costs increased 11%, in line with capacity expansion, which reflects the success of non-fuel cost containment measures. Staff costs were flat year-on-year in the quarter, despite an increase of 4% in headcount to 9,082. Aircraft leasing costs grew by 17.2%, from EUR130.6 million to EUR153.0 million, as Air Berlin, which already operates with one of the world’s highest proportions of leased-to-owned aircraft, increased its fleet of aircraft on operating lease, which helped depreciation costs fall slightly in 2Q. 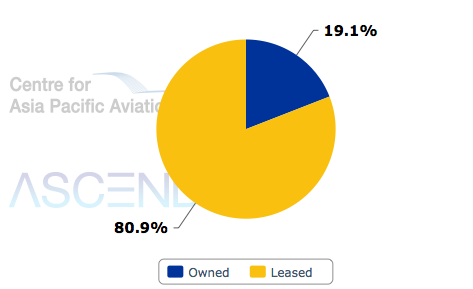 Air Berlin said the “cost side is developing favourably – but only if the dramatic increase in fuel prices and the aviation tax is not considered.” Total costs at EBITDAR level per ASK increased 10.4% to 5.89 cents, but excluding duel and the aviation tax fell 1.7% to EUR3.95 cents per ASK.

Aviation tax pushes Air Berlin into the red, but is not sole problem

The German aviation tax masks what would have otherwise been a turnaround from last year’s 2Q EBIT loss as the tax was introduced on 01-Jan-2011. Air Berlin estimates the tax had a EUR45 million impact on its 2Q2011 operating result. Excluding the impact of this levy, ostensibly to offset environmental impact, Air Berlin would have reported a EUR12.2 million operating profit. However, excluding the tax would not have reversed 1H2011 performance, with the tax's EUR74.4 million charge not enough to offset the EUR220.5 million EBIT loss reported. 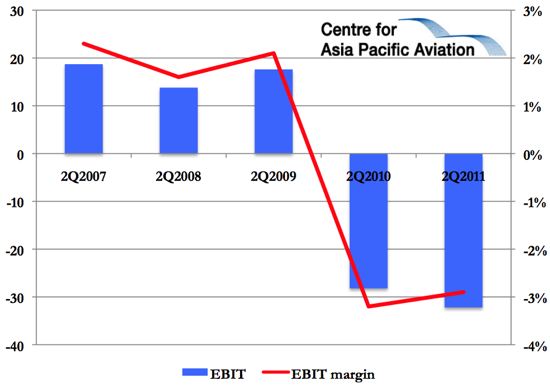 The group’s EBIT margin improved slightly year-on-year to -2.9% on the back on the gains in revenue, which outpaced the rise in operating expenses.

The airline gave a biannual update of its cash flow from operations in 1H2011 of -EUR37.8 million. With increasingly less, and now negative, free cash from operations, debt has increased. Long-term liabilities increased 16.5% since the end of 2H2010 to EUR1.1 billion. In the half, Air Berlin had a EUR150 million bond issue offering an 8.25% coupon, which was oversubscribed. Cash increased 5.8% to EUR433.5 million from the end of 2010. 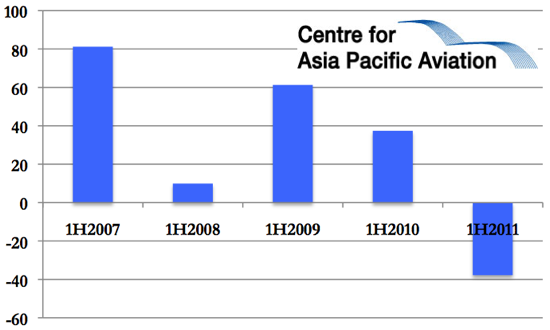 Sweeping restructure on the way

Due to ongoing, and in many areas, worsening, losses across the group and difficult trading conditions in European and African markets, Air Berlin plans to implement in 2H2011 “far reaching” measures to stem losses. The airline plans various yield-supportive measures including cancelling several routes and reducing frequencies on others. Overall Air Berlin will have a 5% capacity reduction, removing over one million seats in 2H2011 and keeping capacity in 2011 and 2012 at 2010 levels. Cumulatively Air Berlin estimates this will lead to a reduction of 16,000 flights and 2.2 million seats.

Cuts will be strong in the troubled North African region with capacity to Egypt and Tunisia to be reduced by a third in the second half. Air Berlin’s plans for 2H2011 bring it in line with LCC rivals Ryanair and easyJet, both of which have announced plans to slow growth in the second half due to sluggish economic growth across Europe and high fuel prices. Capacity will also be reduced on connections between smaller airports.

Air Berlin will remove eight unspecified aircraft from its fleet, which comprises A320 family, A330, and B737NG types. Other aircraft will be redeployed to high-demand routes and feeder services to the group’s four hubs at Berlin Tegel and Düsseldorf in Spain, Austria's Vienna and Spain's Palma de Mallorca. Long-haul service will be concentrated at two hubs, Berlin Tegel and Düsseldorf, and operated in partnership with oneworld members. Collectively these measures will help Air Berlin increase its fleet utilisation rate.

As a result of the capacity adjustment and focus on profitable routes, the airline expects to increase yields in 2H2011, with top line revenue still expected to exceed 2010’s result. Controllable costs will be driven down, the airline said, to allow the group to better cope with sustained high fuel prices.

Air Berlin warned that the effects of the measures are unlikely to be fully realised in the 2011 result, which means the airline will not obtain a positive EBIT for the full year. The group stated in its 1Q2011 results that it expected to finish in the black at the operating level, reversing 2010’s full-year EBIT loss of EUR9.3 million, on the back of rising employment in Germany, strong economic growth and growth in the corporate sector.

Mr Hunold oversaw the airline’s evolution from small charter operator to major European LCC, to hybrid carrier and oneworld member elect. This extraordinary transformation is a credit to Mr Hunold and his team, but external events have conspired to pressure the enlarged group in recent times.

"I'd planned to step down for some time, but thought it better to resign at this juncture so the company can make an unburdened fresh start," Mr Hunold said. He intends to remain "bound to the company for the future" following the board retaining him as a non-executive director.

Mr Hunold's long-term successor faces the challenge of bringing the carrier back to profitability in an environment currently hostile with no relief in immediate sight. Fuel prices remain high, demand to North Africa low, and the government is not relenting on the air travel tax. The restructure will at least go some way in addressing short-term cash burn and stabilise the carrier if the current environment continues.

Increased focus on intercontinental connectivity could help Air Berlin boost its regional network. The airline is increasing cooperation with oneworld carrier American Airlines, a partership Mr Hunold described as a "success story”. The two airlines expanded their codeshare agreement in Jul-2011 to additional trans-Atlantic, intra-European and US domestic flights. Air Berlin says that since the beginning of the year it has received approximately 100,000 codeshare bookings from partner airlines. In Europe, cooperation has been increased with Iberia and Russian carrier S7.

Air Berlin's membership in the oneworld alliance will open additional opportunities for the carrier, particularly with its focus on growing its operation in Asia and expanding into Latin America. Air Berlin has shown it has a solid, if susceptible, platform and must now turn around its regional operation while working towards increasing its long-haul focus, which will improve the carrier's balance between the two segments and provide greater resilience during downturns.