Aeromexico has concluded the dynamism of the Mexican domestic market has slowed, and plans to focus the remainder of its growth in 2H2012 primarily on international expansion in the hopes that soft domestic yields will improve.

But even as the Mexican domestic market appears to be leveling off, Aeromexico believes the country’s economic growth overall remains promising, and is taking steps to create crucial fleet flexibility to ensure it can weather swinging economic fortunes through a pledge to purchase up to 100 Boeing 737 Max and 787-9 jets that allows the carrier to size its fleet upwards or downwards to accommodate market conditions.

The carrier timed the announcement of its intent to purchase the Boeing jets as it released 2Q2012 financial results that showed 15% growth in top-line revenues to MXN10 billion (USD734 million). But its overall profits dropped by MXN431 million (USD34 million), or 74%, to MXN153 million (USD11 million) driven by a 16% depreciation of the Mexican Peso against the dollar and a 14% rise in peso-denominated fuel costs. 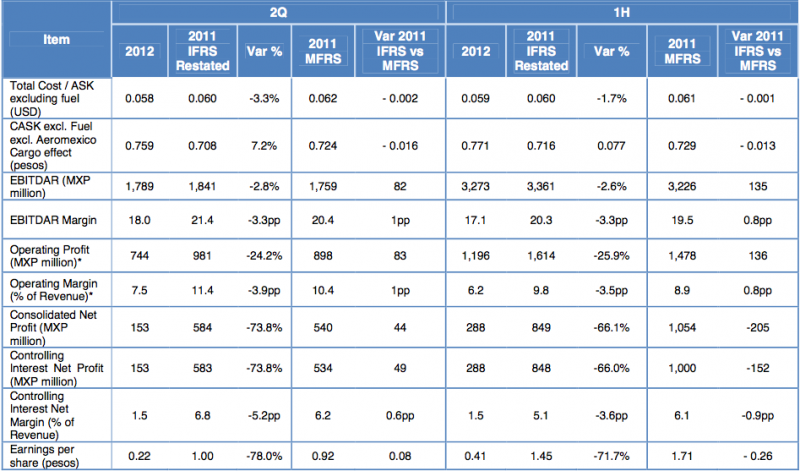 The explosive growth in the Mexican domestic market that occurred after the Aug-2010 demise of Mexicana appears to be tempering, and tilting towards low-cost carriers VivaAeorbus and Volaris, who along with Aeromexico and Interjet quickly moved to seize opportunities created by Mexiana’s market exit. Prior to its collapse Mexicana had a 28% share of the Mexican domestic market.

Mexican DGAC data for May-2011 show that Volaris enjoyed a 2 ppt increase it is domestic passenger share year-over-year to roughly 20% while VivaAerobus enjoyed a similar increase, growing its share from 11% to 13%.

Grupo Aeromexico’s (including its subsidiary Aeromexico Connect) domestic share fell about 2 ppts during May 2011 to roughly 39%. During a discussion with financial analysts outlining the carrier’s 2Q2012 performance, Aeromexico CEO Andres Conesa remarked that during 1H2012 the international market, particularly US transborder, has been strong. He characterised the domestic market as “not weak, but less dynamic”, explaining that yields in the domestic market had been more pressured than international yields.

In order to alleviate some of the pressure on domestic yields, Aeromexico plans to target the bulk of its 8% capacity growth planned for Aug-2012 to Dec-2012 into international markets. The supply growth is being driven by the delivery of the first three 737-800s from an existing order for 10 jets, and two 70-seat Embraer E170s that are replacing Aeroemexico Connect’s smaller-gauge 50-seat ERJ-145s.

Mr Conesa observed that most of the overall capacity growth in the Mexican domestic market occurred during 1H2012, and “we do not have any additional information of new aircraft from competitors between today and the end of the year”. Mexican low-cost carrier Interjet plans to take delivery of its first two Sukhoi Superjet 100s during late 2012, and has previously indicated it would deploy those aircraft on medium-density routes. The carrier also is expected to add a total of six A320 narrowbodies to its fleet during 2012, with two deliveries scheduled for Nov-2012. In late 2011 Volaris estimated it would expand its fleet by seven A320s in 2012 for a total of 41 Airbus narrowbodies while VivaAerobus stated it planned to expand its fleet of 17 737-300s by four aircraft in 2012, with two delivered in the second half of the year.

There have been some slight changes in the market dynamics involving Mexico’s four largest carriers – Aeromexico, Interjet, Volaris and VivaAerobus – during 2012. After rising to become Mexico’s second largest domestic carrier with a roughly 23% share, Interjet in 2012 has largely focussed on international expansion. The carrier began broadening its reach into international markets in Dec-2011 and since that time has launched flights from Mexico City to Guatemala, Havana, San Antonio, Miami, and San Jose in Costa Rica. The carrier plans additional US expansion in 03-Aug-2012, when it launches a single daily flight from Mexico City to New York JFK operated with an all-economy Airbus A320.

Volaris made more of transborder push in the wake of Mexicana’s demise and now serves eight destinations in the US. But during 2012 the carrier has also targeted domestic expansion from Guadalajara to Chihuahua, Monterrey, Puebla, Los Mochis and Cancun. Volaris now accounts for nearly 37% of the seating capacity at Guadalajara, which is Mexico’s third busiest airport. 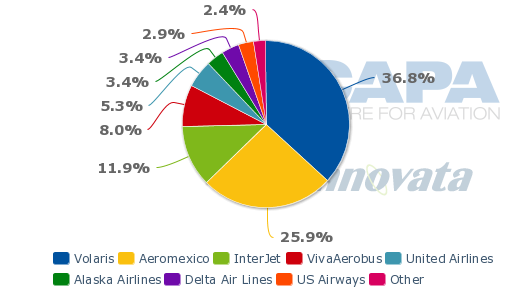 Aeromexico’s new domestic service introduced during 2012 includes flights from Mexico City to Chetumal and Manzanillo and Monterrey to Cancun and Puebla. Schedules show the carrier plans to launch Mexico City-Querertaro on 01-Sep-2012. Aeromexico is the lone airline offering flights from Monterrey and Puebla, and faces no competition on its new service to Queretaro. Monterrey-Cancun is most crowded of the new markets as Aeromexico, Interjet and VivaAerobus all serve the route while Aeromar is Aeromexico’s only competition between Mexico and Manzanillo. The carrier competes with Interjet in the Mexico City-Chetumal market. Aeromexico is not the dominant carrier in terms of seat share in any market where it faces competition, and with the exception of Monterrey-Cancun operates those markets with Embraer E170/190s or ERJs.

Pressure is likely to mount on Aeromexico in its domestic markets as Interjet targets medium-haul markets with its smaller-density 93-seat Superjet 100s. The carrier has stated it could add up to 21 markets by the time its first tranche of 15 aircraft are delivered through 2014. Aeromexico serves similar markets with the Embraer E170s/190s operated by Aeromexico Connect. The competition with Interjet could further pressure Aeromexico’s domestic yields and dent its nearly 40% share of the domestic market.

Strong loads in US transborder markets

In 2011 Aeromexico launched transborder service from Monterrey to Brownsville, Texas and between Guadalajara and the California markets of Fresno and Sacramento.

During 2012 the carrier has launched service from Mexico City to Atlanta and Washington, DC and between Cancun and New York. The carrier has also bolstered its service to Miami and San Antonio (both served by Interjet), and anticipates introducing Mexico City-Dallas/Forth Worth by year-end 2012.

During 2Q2012 Aeromexico’s load factors on its transborder markets were 78%, said Mr Conesa, which was in line with the carrier’s performance in 1Q2012. Based on advanced bookings for the next couple of months, he concluded that “things are not slowing down”.

In addition to new flights between New York and Cancun, Aeromexico in 2012 has introduced service from Cancun to Bogota, Colombia and San Jose, Costa Rica. Mr Conesa remarked that while most of the new service from Cancun was point-to-point in nature, Aeromexico was working with partner Delta to find ways to enhance competitiveness and connectivity in Cancun. Schedules in Innovata show Delta offers the greatest number of flights to Cancun from its Atlanta hub, with fewer frequencies from Salt Lake City, Nashville, Detroit, Memphis, Orlando, Indianapolis and Tampa. Delta’s expanded presence in the New York market will likely benefit Aeromexico through a possible acceleration of the maturity on its recently launched flights from JFK to Cancun.

Cancun is a prominent leisure destination, and the busy airport is somewhat fragmented market as no one carrier is dominant at the airport in terms of seat share. 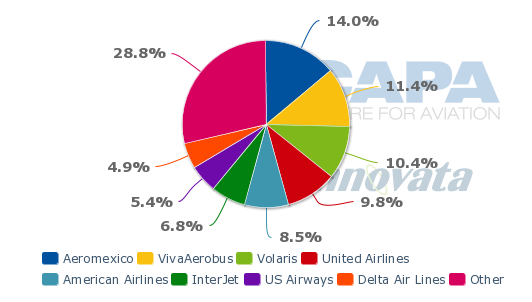 Aeromexico carefully timed its pledge to order up to 100 Boeing aircraft – spilt between 90 737 Max-8s and the 10 787-9s – to ensure it could secure deliveries timed to coincide with lease expirations on its current 737 narrowbodies. The airline expects to operate 45 737s by the end of 2012.

Carrier CFO Ricardo Sanchez explained Aeromexico’s leases on its 737s start to expire next year, so it was important to develop a long-term fleet strategy to allow the carrier to forge new lease terms that expire as the new aircraft are delivered. Depending on market conditions, Aeromexico can use the new aircraft for growth or to keep its fleet flat and decrease average aircraft age. The carrier expects to take delivery of its first CFM Leap X-powered 737 Max during the first quarter of 2018.

Mr Conesa stated the backlog of the 737 Max and A320neo today is significant, and if Aeromexico opted to wait a couple of years to place an order it would not gain delivery positions until 2023 or 2024.

After it officially places a firm order for the 100 Boeing aircraft, Aeromexico’s fleet could reach 210 aircraft in 10 years from a year-end 2012 target of 115 aircraft. But Mr Conesa also stated that if economic growth does not pan out as expected the carrier could keep its fleet closer to its current scale.

Aeromexico fleet plan as of Mar-2012 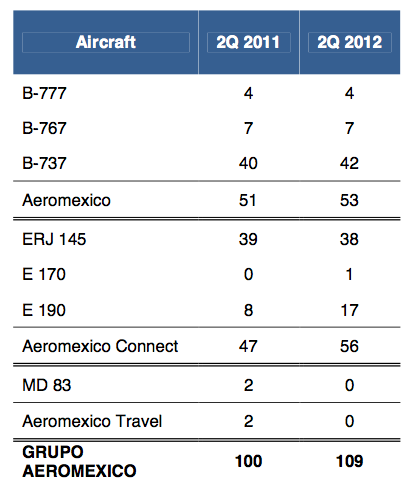 The 10 787-9s Aeromexico intends to order will join nine 787-8 aircraft Aeromexico plans to start adding to its fleet in 2013 with planned deliveries of two of the widebody aircraft. Mr Conesa said the 10 787-9s would replace the carrier’s four 777-200ERs. The 250-seat 787-9 is a smaller-gauge aircraft than the 277-seat 777s operated by Aeromexico, and will allow the carrier to expand its long-haul footprint, which is limited to a total of five markets in Europe and Asia. Aeromexico currently operates is 777s to Madrid, on some flights to Barcelona, to Sao Paulo and into Shanghai.

Aeromexico long-haul network as of Mar-2012 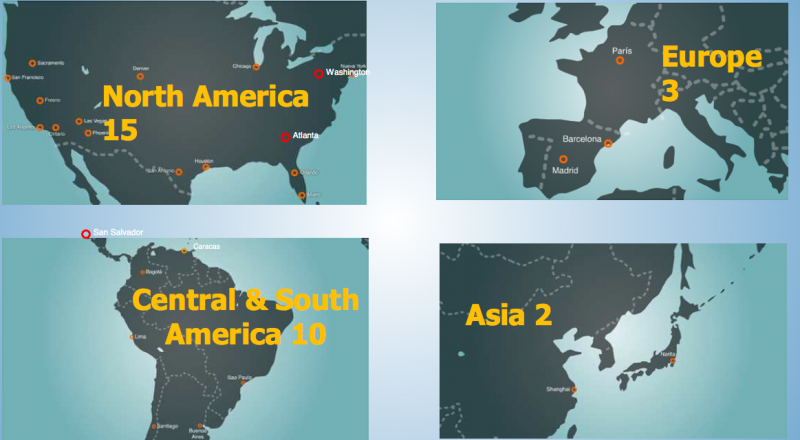 Aeromexico’s management has opted not to disclose specific details about potential routes for its 787-8s/9s other than stating it would consider additional markets in Europe and South America. The carrier has also stated the 787 would allow it to serve Mexico City-Japan non-stop rather than having a stopover in Tijuana. Adding the 787 could allow Aeromexico to open additional routes to Asia, increasing connections between two major growth markets in air travel that currently have little direct service. Service from Central and Latin America to Asia comprise long-thin markets that Boeing has repeatedly stressed are ideal for the 787.

Increasing the number of owned aircraft

Aeromexico is also designing the new Boeing order to allow it to increase the number of owned aircraft in its fleet, which Mr Conesa concluded would put Aeromexico on par with the most “profitable and solid airlines in the world”. Aeromexico currently owns about 25% of its fleet in terms of value, and Mr Conesa stated the carrier’s target is to own two-thirds of its fleet.

Breakdown of leased vs owned aircraft in Aeromexico fleet: 2012 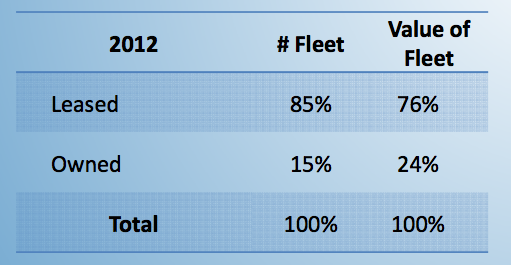 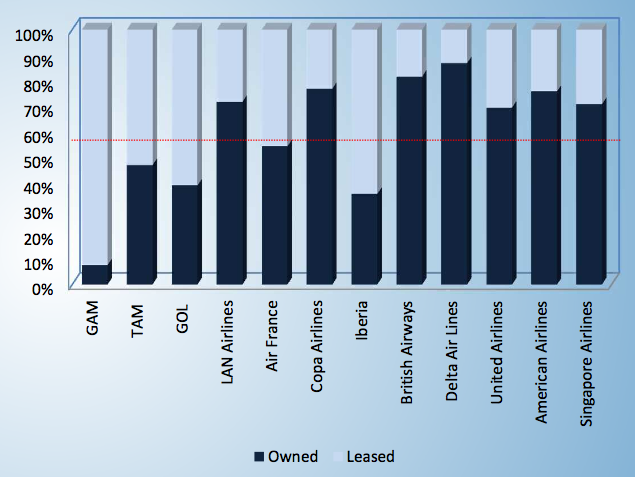 The carrier’s chief executive explained that in some cases lease multiples could be seven-to-eight times of an aircraft, and the favourable pricing Aeromexico negotiated on the new aircraft could allow the carrier to lower its total aggregate debt levels.

Mr Conesa also stressed that Aeromexico’s order for up to 100 Boeing aircraft is directly tied into the carrier’s confidence in Mexico’s future economic growth. The country’s GDP growth is expected to reach nearly 4% in 2012 and range from 3.8% to 3.3% between 2013 and 2018, when Aeromexico takes delivery of its first 737 Max. But it is unlikely that the carrier’s fleet will hit the top end of its projections of 210 aircraft as the growth and ambition of its competitors continues unabated.