There have been reports in the Bangkok Post today that Thai Board Member Sathit Limpongpan, also Permanent Secretary for Finance, suggested the flag carrier's management explore the possibility of becoming a stakeholder in Singapore-listed Tiger Airways Holdings Ltd. Dr Sathit reportedly floated the idea at a Thai board meeting last month.

Macquarie Equities also downgraded the stock from ''outperform'' to ''neutral''. Shares in the carrier were not traded, due to a public holiday in Singapore, although the carrier’s share price on Friday suffered its largest single day fall since its was floated seven months ago, dropping 7.6%.

Standard & Poor's Aviation Analyst, Shukor Yusof, commented that LCCs “still remain the dominant player in Southeast Asia and also away from Southeast Asia because of their first mover advantage and their ability to understand the intricacies of the low cost model.”

In India, India’s benchmark stock index advanced to a 30-month high, amid expectations that rising incomes and the nation’s economic growth will boost profitability. Shares in Kingfisher, SpiceJet and Jet Airways all gained yesterday, with increases of 1.8%, 1.8% and 1.1%, respectively. 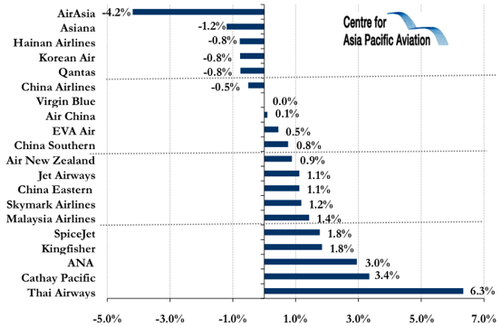 Source: Centre for Asia Pacific Aviation, Reuters & Financial Times
*It was a public holiday in Singapore on 09-Aug-2010