Marking its fifth year in existence Virgin America can hardly still be identified as an upstart carrier. Its US and transborder network spans 17 markets, and the carrier has worked to build a presence in many of the large metropolitan regions in the country. It is further maturing by embarking on a codeshare with fellow Virgin Group carrier Virgin Australia after forging interline agreements with 14 carriers. But as it works toward a goal of achieving sustained profitability ahead of a possible initial public offering in 2013, Virgin America is facing a challenge of containing costs as it attempts to build up economies of scale while attempting to record any level of consistent profitability. 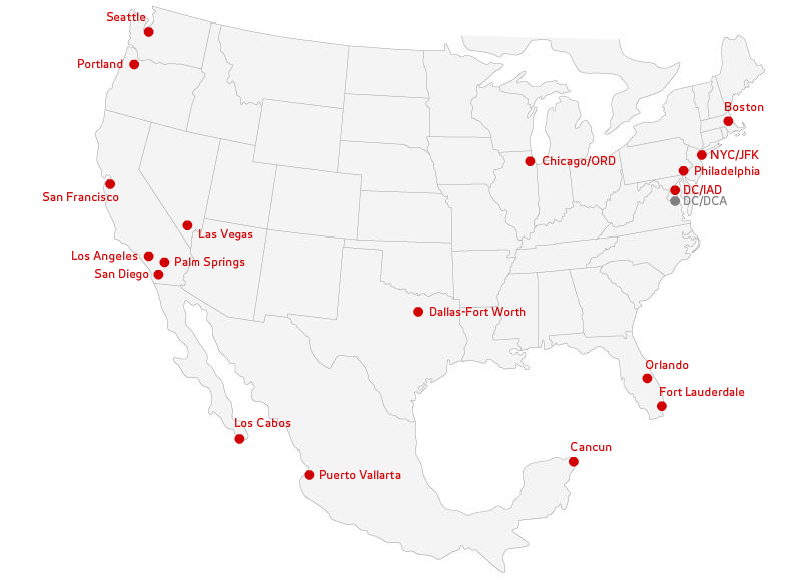 The carrier faces challenges in building up its network while answering to investors that are patiently waiting for Virgin America to turn a profit after being in business for five years. Its only profitable quarter on a net basis was 2Q2010. The carrier has only posted operating profits in the 3Q of 2009-2011. Nearly every US carrier is profitable in the third quarter as it encompasses the high season for summer travel in the country.

While profitability continues to elude Virgin America, the carrier is gaining traction in other financial metrics, including revenue and yield growth. For the full-year 2011 the carrier’s average one-way fare grew 13% to USD189, which was USD34.26 higher than JetBlue’s average one-way fare of USD154.74. JetBlue offers a similar hybrid product to Virgin America – low fare with frills.

The airline’s unit costs excluding fuel of USD6.56 cents were lower than the USD6.71 cents recorded by JetBlue and the USD7.60 cents posted by Alaska Airlines, which also operates somewhat of a hybrid business model. But when comparing unit costs and average fares, Virgin America benefits from having longer average stage lengths than its competitors because a large chunk of its capacity is allocated to trans-con routes.

Virgin America’s overall operating expenses jumped 45% year-over-year to USD1 billion, driven by a 69% hike in fuel costs, a 39% increase in aircraft rent as 12 aircraft were added to its fleet and a 37% rise in sales and marketing as it introduced flights to Chicago, Palm Springs and Puerto Vallarta. The airline also likely had some carry-over expense from new flights introduced in late 2011 to Dallas, Los Cabos and Orlando. It is unlikely sales and marketing expense will fall drastically this year as Virgin America has already inaugurated new service to Philadelphia and Portland, Oregon, and will begin in Aug-2012 flights to Washington National.

The airline’s expansion during the last five years is reflected in operating expenses that have steadily increased each quarter. During 2011 the carrier recorded a marked rise in expenses each quarter: 41% in 1Q, 57% in 2Q, 52% in 3Q and 39% in 4Q. 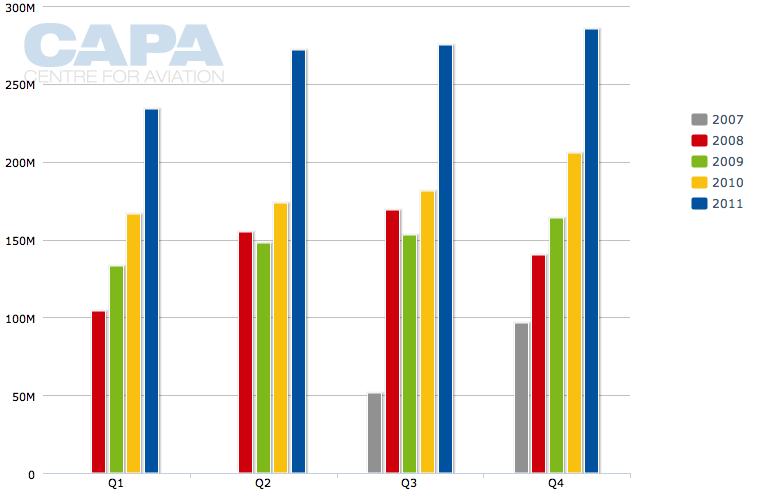 Virgin American will likely see little benefit from a recent fall in fuel prices, and its profitability prospects in 2012 could actually be crimped by falling fuel prices. In May-2012 the carrier stated it had hedged 37% of its fuel consumption for the remainder of the year near current market levels. Prices have fallen since that time, and recently crude oil fell below USD80 per barrel. The airline’s efforts to protect itself against rising fuel costs could backfire, and create further challenges for Virgin America in attaining its first yearly-profit.

Virgin America’s distinct product (fleet-wide Wi-Fi and power plugs at every seat) has won wide accolades across the travel industry, but the distinction also comes at a price, and no evidence exists to show that travellers book on product alone. The combination of lower fares relative to its legacy rivals and its superior product to those carriers has allowed Virgin America to gain a significant following among tech-savvy business travellers, but it needs to capture a broader swath of followers to ensure it has a sustainable future.

Building a presence in key markets

During its five years in business, Virgin America has taken the right steps to build-out diversified network that covers all the large US population centres and a number of leisure markets. With a presence in San Francisco, Los Angeles, New York, Dallas, Boston, Philadelphia, Chicago and Washington, Virgin America offers flights to all the major US population centres and business markets. The carrier also balances its network out with flights to Cancun, Puerto Vallarta and Los Cabos in Mexico and Fort Lauderdale and Orlando in Florida. Virgin America also caters to business travellers in the Miami metropolitan area through its flights to Fort Lauderdale, which is 43km from Miami. 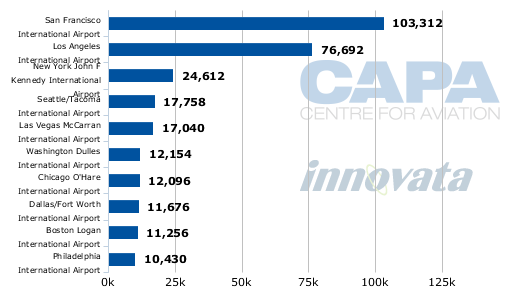 Rising average fares and decent load factor performance indicate Virgin America appears to be at least holding its own in markets where it competes directly with legacy carriers. US Department of Transportation (DoT) data show that Virgin America’s load factors to Dallas, where it offers flights from San Francisco and Los Angeles, were 72%. The carrier competes with both American and United in both markets, and survived an aggressive frequent flyer promotion launched by American shortly after it entered the Dallas market. 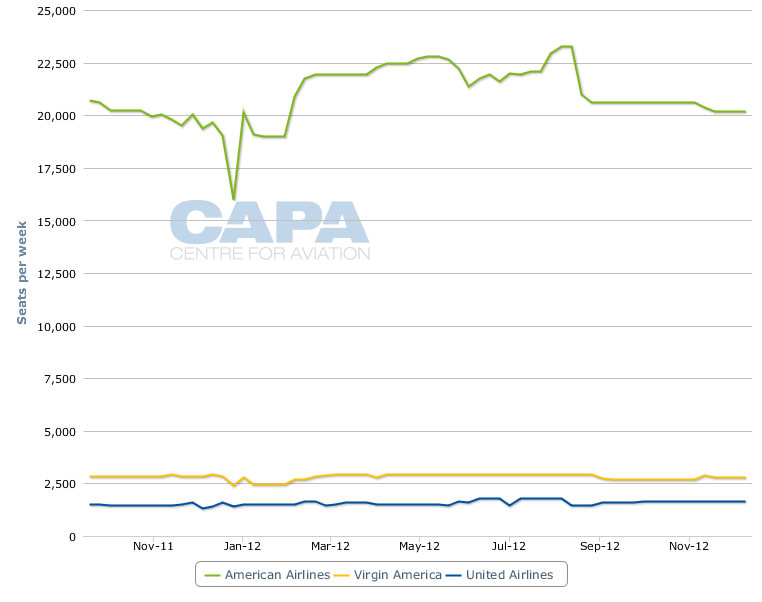 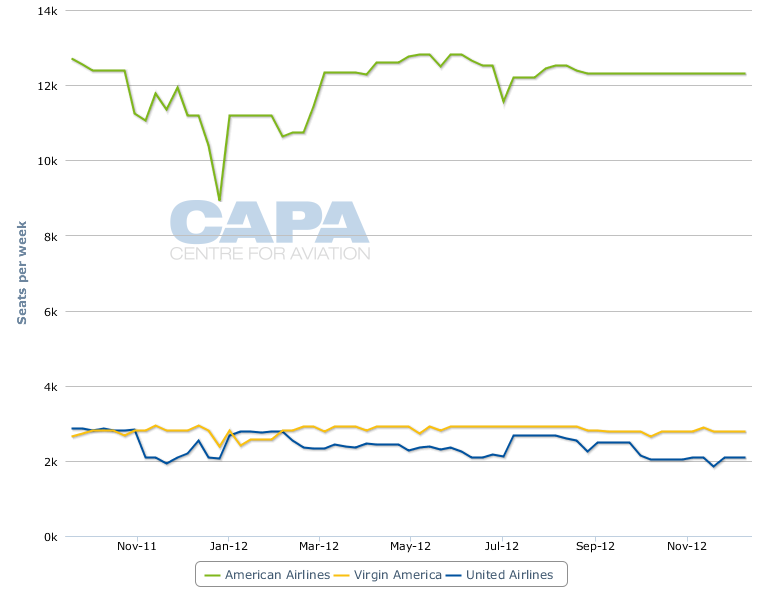 In the even more crowded Chicago market, Virgin America recorded load factors of 77% in 2011. It launched service from San Francisco and Los Angeles to Chicago in late May-2011, joining familiar rivals American and United in serving the market. 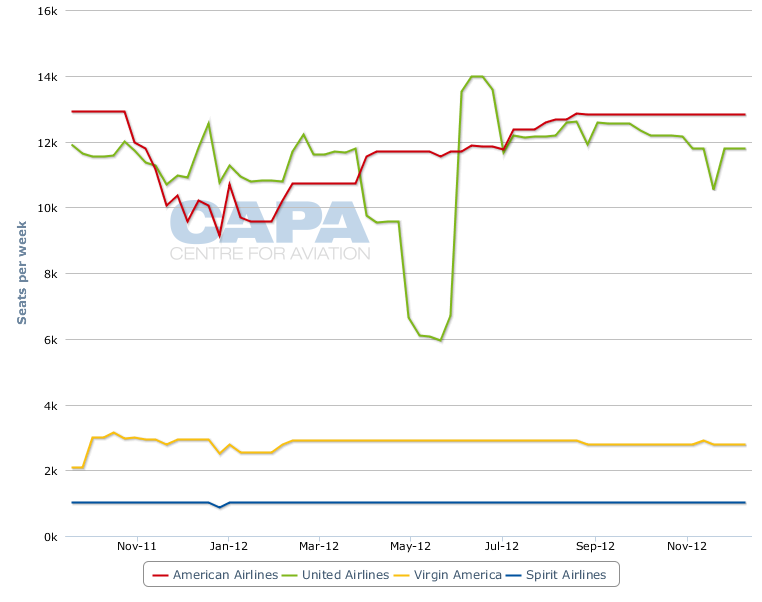 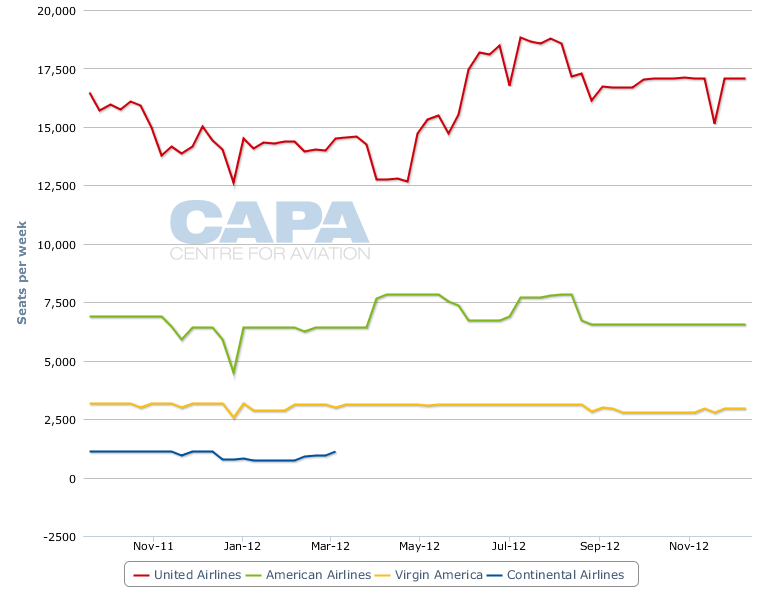 Virgin America has coexisted with United since its launch five years ago at United’s San Francisco hub, and competes with United in nearly every market from its bases in San Francisco and Los Angeles, with the exception of Fort Lauderdale, where Virgin America competes with JetBlue on flights from San Francisco, and JetBlue and American on the Los Angeles-Fort Lauderdale pairing. Virgin America’s overall 82% system load factor in 2011 shows the carrier is absorbing demand it has put into its markets, and not at the expense of yields, which showed strong year-over-year growth during 2011. United has either opted to match Virgin America’s fares, or cede a low-yielding portion of its markets to the low-cost carrier.

In Jun-2012 Virgin America launched flights from another Alaska hub, Portland, to San Francisco and Los Angeles, creating more direct competition for both Alaska and United. Virgin America has quickly ramped up in the Los Angles-Portland market, and now accounts for roughly 2100 one-way weekly seats, or about 25% of the total capacity in the market. United’s 13% share reflects its approximate 1200 weekly seats while Alaska holds the majority of the seats at roughly 5500, or a 64% share. 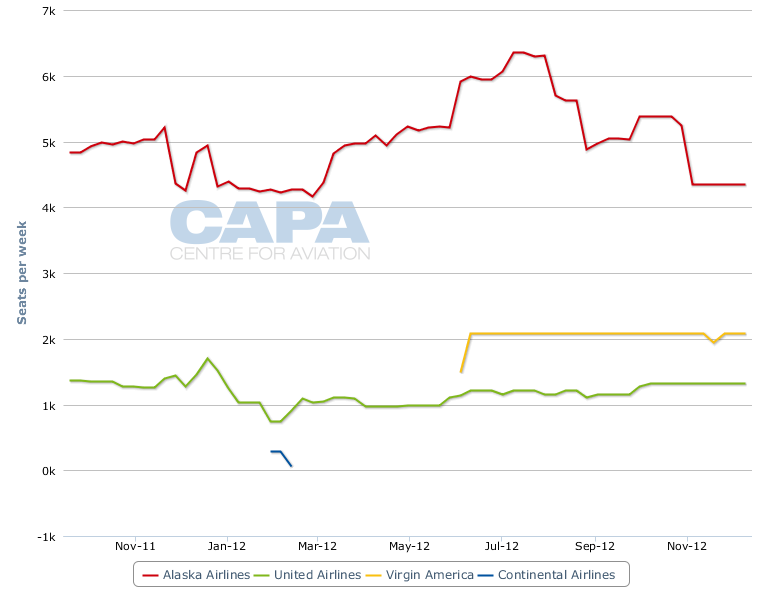 Virgin America’s approximate 1900 weekly one-way seats in the San Francisco-Portland market now account for about 15% of the market’s total capacity. United, which has a hub in San Francisco, offers about 6900 seats that translates into a 53% share. Alaska’s approximate 4400 seats account for a 33% share. The Portland International Airport has reportedly given Virgin America USD200,000 in marketing and advertising support for the launch of the new flights, which is likely the case in several markets where Virgin America touts it will usher in lower fares. 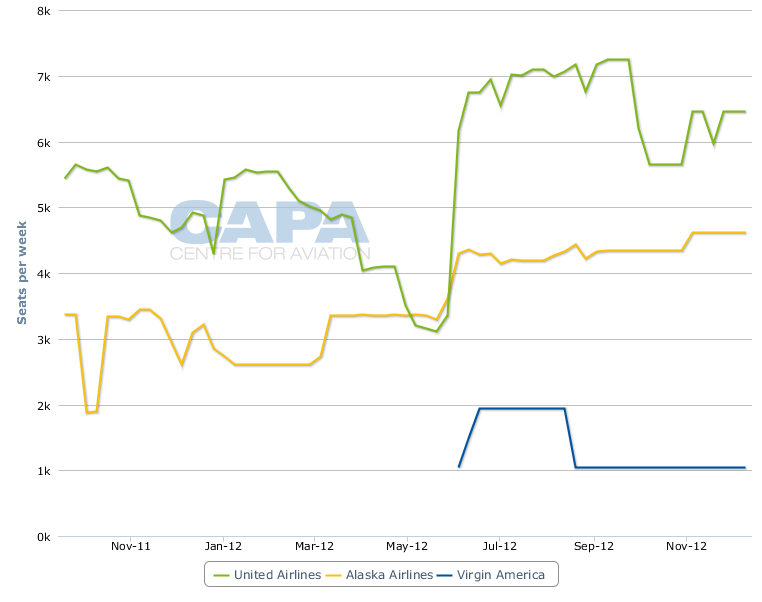 From Aug-2012 Virgin America will once again spar competitively with United as it launches new service from San Francisco to Washington National Airport. The carrier already has an established presence in the Washington, DC metro market through its flights from Washington Dulles to San Francisco and Los Angeles. Washington Dulles is Virgin America’s sixth largest station in terms of seats offered, and its load factor on flights to the airport during 2011 was 82%.

Building partnerships for connections in Los Angeles and San Francisco

As it attempts to build out a balanced US network, Virgin America is also creating partnerships to take advantage of its position in San Francisco and Los Angeles. Partnerships with foreign carriers serving Los Angeles and San Francisco, both of which are big international gateways, will help increase passenger counts and bring in incremental high-yield traffic at its two bases.

The new agreement with Virgin Australia is Virgin America’s first codeshare deal, and will likely be followed by other deals in the future now that Virgin America has the technology to support codeshare pacts. The carrier had a somewhat rocky transition to the Sabre passenger service system in late 2011. Despite having the back-end technology now in place to support codesharing pacts, the carrier had to make an upfront investment of USD4 million in the system, and recorded another USD4 million in expenses to make the technological cutover. While those types of investments will pay off in the long term, they further widen the short-term gap in Virgin America’s operating expenses and revenues.

Despite making all the right moves in building up a strategic network and a desirable product, Virgin America still faces an uphill climb in recording its first yearly profit as it appears to be trading off growth for profitability in the short term. That trade-off will likely push out any initial public offering beyond 2013 as Virgin America must first demonstrate it has the ability to turn regular profits.