North American carriers continue to be cautious in their capacity plans for 2011, with 2010 showing that careful capacity management can have a positive effect on load factors, yields and profitability. This focus on the protection of yields has become increasing important again as escalating fuel costs threaten the global aviation industry’s profits and carriers’ yields. 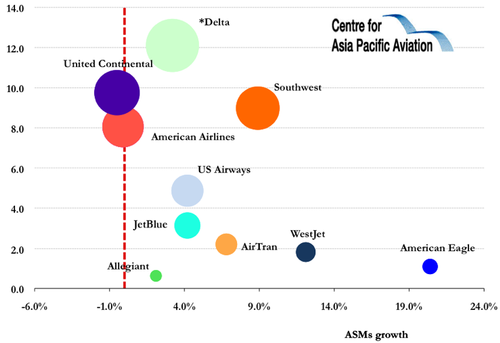 As noted by the Air Transport Association of America (ATA), 21st century capacity growth highlights the"‘tale of two markets", with weak domestic growth and increasing international capacity growth. Over the past decade, domestic capacity has declined by 7.2% compared with international growth of 14.7%.

* Scheduled US and non-US-airline flights departing US airports for non-US destinations
Source: Innovata (via APG) published schedules as of April 8, 2011

The number of domestic services is down by around 18-19% and by 0.2% internationally

* Scheduled US and non-US-airline flights departing US airports for non-US destinations
Source: Innovata (via APG) published schedules as of April 8, 2011

ATA also noted that capacity is being rebalanced with the size of the US economy.

Domestic seating capacity declined by the most since 1942 in 2009, marking the largest post-World War II contraction in the aviation history. While capacity is being added back into the domestic market, growth remains cautious.

Due to the recent increase in fuel prices and as part of efforts to maintain the positive yield trajectory, a number of US carriers have announced capacity growth reductions in recent weeks.

As previously noted, United Continental plans to reduce consolidated capacity from its previous 2011 projections by approximately 1% effective with its May-2011 schedule and by 4% from its Sep-2010 schedule. With these reductions, 4Q2011 consolidated domestic capacity is expected to decrease 5% and consolidated international capacity is expected to increase 2% compared to the pro forma capacity for the same period last year. The capacity changes will be accomplished through reducing flight frequencies, indefinitely postponing the start of flights to certain markets and exiting less profitable routes.

With those reductions, United said its 2011 consolidated capacity will be roughly flat with 2010, but down from its prior forecast of an increase of 1% to 2%.  United expects its international capacity to grow by 2.5% to 3.5% this year and its domestic capacity to decline 1.5% to 2.5% from 2010. In Jan-2011, the largest airline said it expected its international capacity to increase 4.5% to 5.5% in 2011 and domestic capacity to shrink by 0.5% to 1.5%.  Concurrent with the capacity reductions, the company is also analysing the removal of certain less fuel-efficient aircraft from its fleet and will be taking other cost saving measures.

Delta Air Lines has also downgraded its 1Q2011 capacity guidance to growth of 3-5%, down from forecasts of 5-7%. Meanwhile, American Airlines stated it would trim its capacity plans by 1 ppt from the previous guidance as the industry tries to offset rising fuel costs with fewer flights and higher fares. The carrier, in Jan-2011, had stated that consolidated capacity would by 3.6% up from 2010 levels in 2011.

Southwest stated it would reassess its capacity plans when oil prices reached USD3.30/gallon. Allegiant, meanwhile, is targeting single digit capacity growth in 1Q2011 but expects to reduce capacity by 2% in Apr-2011. 2Q2011 and 3Q2011 capacity is expected to be in the flat to negative 4% range. 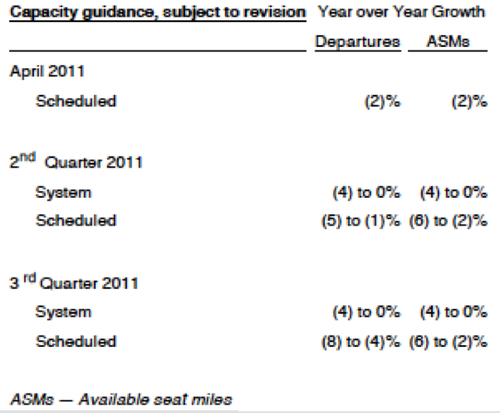 Load factors in Mar-2011 were not as strong as the record load factor results witnessed in 2010, with a number of carriers witnessing domestic load factor reductions. For example, Delta/Northwest, United Continental and American Airlines all reported load factor contractions in the domestic market. Southwest Airlines continued to report load factor improvements, although growth slowed to 0.6ppts. 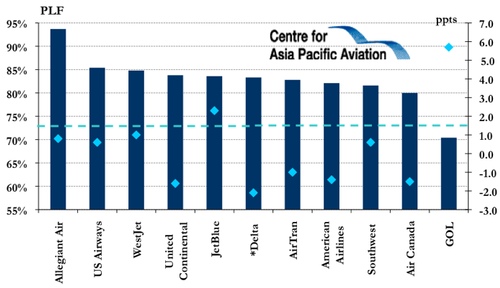 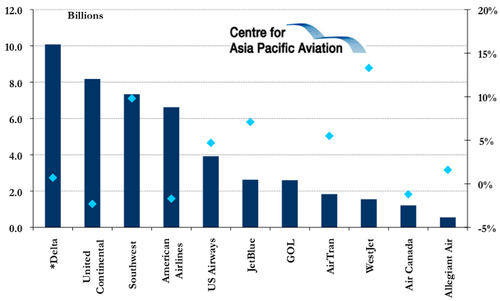