United Airlines is recording positive unit revenue trends at the start of 2013 after merger integration headaches resulted in significant revenue degradation for the carrier in 2012. With the airline's management assuring that the bulk of the integration challenges have been overcome, and the work to bring legacy United up to par with Continental’s service standards is well underway, expectations are high for United to begin to deliver on the promised benefits from the merger with Continental.

Signs of a turnaround for United do appear to be emerging as its passenger unit revenue increase of 6.5% to 7.5% for Feb-2013 was the highest among the traditional US network carriers. It is a significant improvement from the unit revenue weakness United suffered throughout much of 2012 relative to the US industry at large. For the full year 2012 United’s passenger unit revenue growth was flat compared with 7% growth at Delta, a 5.6% rise at America and a year-over-year increase of 4.3% at US Airways.

The airline’s on-time performance (OTP) is also on a marked upswing after United suffered a partial operational meltdown during the 2012 summer season when its OTP in Jul-2012 sank to 64%, a 10.2ppt drop year-over-year.

United's PRASM increase of 6.5% to 7.5% for Feb-2013 was the highest among the traditional US network carriers – but it still leaves a negative gap. 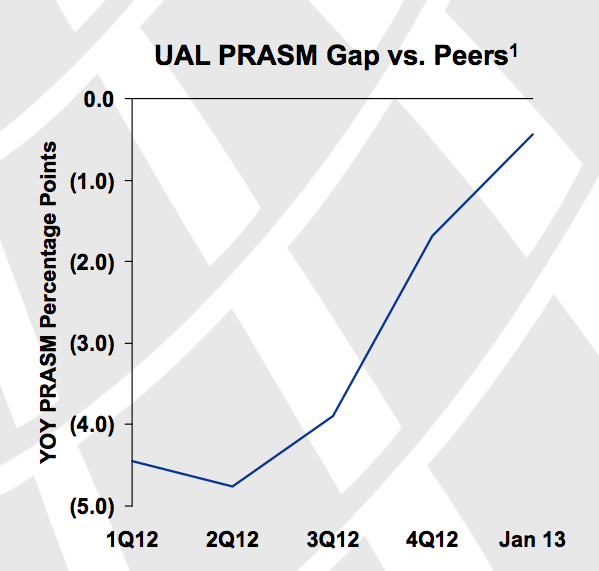 The upswing in both revenue and on-time performance is encouraging as United works to regain corporate share it admittedly lost in 2012 as cross-fleeting between the legacy United and Continental fleets created spares shortages, which contributed to its operational weakness.

A massive IT cutover also hurt the carrier’s performance in the corporate space, which coupled with the operational snafus sent high-yielding business travellers elsewhere.

Recently outlining United’s rebound to investors, company CEO Jeff Smisek stressed that the carrier beat its operational goals in Jan-2013 and Feb-2013 in both its international and domestic networks – the first time United had achieved those types of results in a decade.

With the bulk of the integration challenges seemingly overcome, Mr Smisek noted that United is now equipped to make more favourable revenue management decisions now that the carrier can study the demand patterns of the combined networks.

Not surprisingly, United management has repeatedly emphasised that once the teething pains of integration have subsided the combined carrier's network would be its biggest selling point.

Based on current schedules in Innovata (17-Mar-2013 to 23-Mar-2013), United has commanding seat share between the US and Western Europe among the US legacy carriers at 16%, followed by Delta at 14%, American with a 9% share and US Airways accounting for 4% of the seat share. 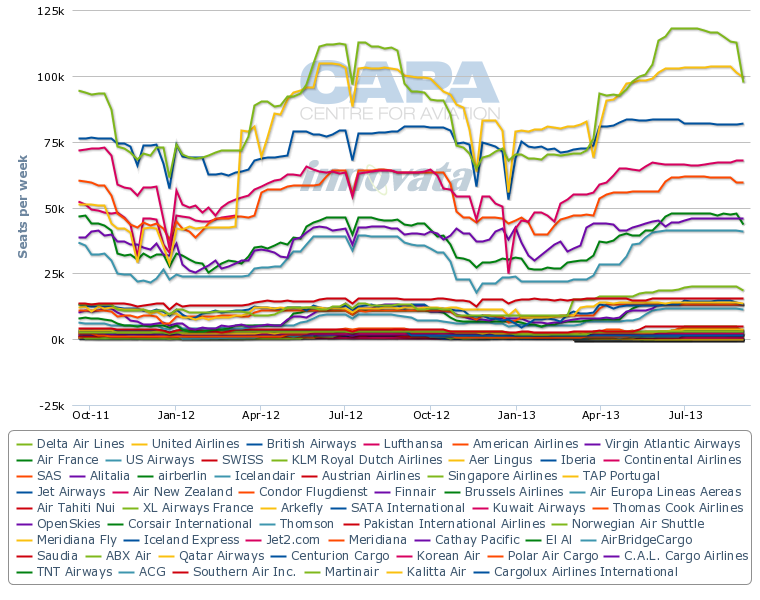 United also holds a 17% share from the US to Northeast Asia, compared with 16% at Delta and 5% at American. 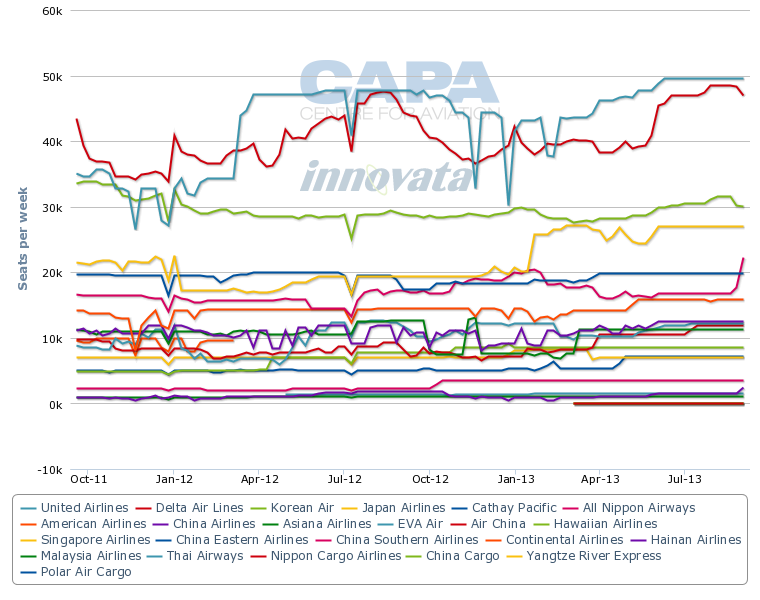 United’s position in Latin America is somewhat weaker as it holds a 12% seat share among US legacy carriers operating to upper South America. American commands a powerful 33% share in the region and Delta has a 10% share.

American is also the leading US carrier to lower South America, accounting for a 48% share compared with 18% for Delta and 9% for United. 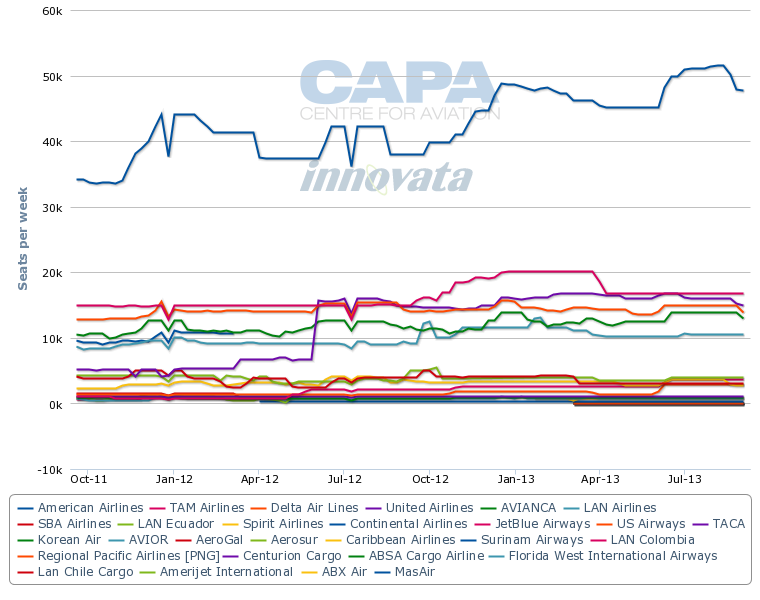 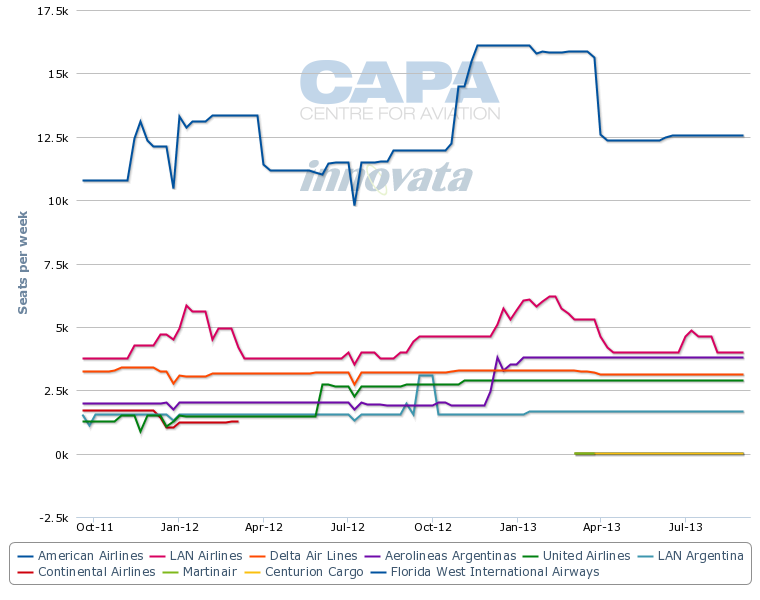 Much of the market share in those regions among the US majors will remain unchanged once American and US Airways merge, given US Airways’ smaller international footprint. The carrier has no service to Asia and by the time the merger is complete will only serve Rio de Janeiro and Sao Paulo in Brazil. So United should be able maintain its strong international position from the US to Europe and Asia.

Alliance changes will create challenges for United and Star Alliance

United and its fellow Star partners face a major challenge in Latin America, where the major alliance shift that will occur once LATAM Airlines Group joins oneworld is set to create a major gap in the region for Star, which currently accounts for roughly 28% of the seating capacity in the region.

Once TAM, which is now part of the mammoth carrier created by its merger with LAN, migrates to oneworld, Star’s share will fall to 17%. Star has a major hole to fill in Latin America’s largest market, Brazil, given TAM is the country’s largest carrier. The alliance can recoup some of the loss with the expected entry of Avianca-TACA affiliate Avianca Brazil, which was prohibited from joining Star when Avianca-TACA joined in 2012 by TAM. But now the carrier’s ascension into Star is likely, giving the alliance some traction in Brazil’s domestic market.

The addition of Copa and Avianca-TACA to Star results in the alliance maintaining a significant presence in Latin America, and more importantly, continuing to have a share lead over SkyTeam whose seat share in the region will essentially remain unchanged at 12%.

Getting the legacy United product on par with Continental’s standards

A topic much less discussed by United is the outlay that has been necessary to bring the legacy United up to Continental’s standards.

Prior to the merger, Continental’s inflight product was measurably better than United’s as a result of United spending nearly half of the last decade in Chapter 11 bankruptcy protection. Mr Smisek noted that since the merger United has had “some unusual levels of expenditures” that spanned not only merger integration but some front-end loaded capex costs to ensure product parity between the two carriers. “We’ve had to play a lot of catch-up,” said Mr Smisek. “Particularly...on the old United side of the house.”

American will be offering a similar product on its new Airbus A321 narrowbodies scheduled for delivery beginning in Nov-2013. United is also in the midst of equipping its fleet with satellite Wi-Fi connectivity, and has installed larger bins on some of United’s older narrowbody aircraft.

Mr Rainey also made another important point, noting that if United hits return targets (the carrier has a stated goal of return on capital investment of 10%), “then you have a scenario where you’re spending off pretty good cash flow and you can have a very good discussion about the right cash flow allocation and including what goes to shareholders”.

His remarks about shareholder returns are becoming prevalent in the airline financial discourse as the US industry is reaching a level of fiscal and supply discipline that is driving the need for discussions about use of cash allocation and how to reward the patient shareholders that have endured the historical boom and bust cycle that has produced zero returns in the airline business.

Delta recently stated it has reached a point where it can reasonably look at some sort of return to shareholders.

See related article: Delta presses forward to build a competitive network in a consolidated and mature US market

It is time for United to start delivering on promises

United intends to keep its capacity discipline in place, and has not deviated from its plans to decrease capacity by 1% during 2013 and keep its fleet count flat during the next few years. With a fleet count of roughly 700, United management estimates that roughly 30 replacement aircraft for less fuel-efficient jets will be required annually.

Confidence by United’s management that the most painful aspects of the merger integration are now settled will need to be converted to reality for investors awaiting the promised USD1.2 billion in merger synergies. The carrier has not committed to reaching that target in 2013, warning that the full realisation of those benefits could spill over into 2014.

With the immediate pressure of merger-related integration headaches waning, United now needs to sustain its revenue momentum and give shareholders assurance that their patience in waiting for some return on their investment will pay off.

The carrier’s improved grasp on its operations should allow United to deliver on its promises, but the competition will not be standing still either.

United's mainline and regional fleet as of Jan-2013