LATAM Airlines Group announced on 07-Mar-2013 that its TAM, TAM Paraguay and LAN Colombia subsidiaries would join its sister carriers in oneworld, confirming moves which had been considered a foregone conclusion for 18 months. The Star Alliance now faces the risk of not having a member in Brazil, one of the world’s most important growth markets, after TAM shifts from Star to oneworld in 2Q2014. But the void will not last long as Brazil’s fourth largest carrier, Avianca Brazil, will almost certainly join its sister carriers in Star, potentially by the end of 2014.

Meanwhile, Brazil’s second largest carrier Gol continues to be wooed by SkyTeam. With TAM moving to oneworld and Avianca Brazil expected to join Star, the stakes mount for SkyTeam while the benefit of maintaining independence for Gol diminishes.

Star is now the leading alliance in Latin America by a wide margin, accounting for about 28% of total seat capacity in the region, compared to about 15% for oneworld and about 12% for SkyTeam. But it has been known for some time that its preeminent position in Latin America, which was reinforced when Copa, Avianca and TACA joined in Jun-2012, would be short-lived. With the inevitable now confirmed, Star will see its share of capacity to, from and within Latin America slip to about 17% while oneworld will surge to about 27% and SkyTeam will stay at least for now at 12%.

See related article: Avianca-TACA and Copa put Star on top in Latin America but the victory will be short-lived 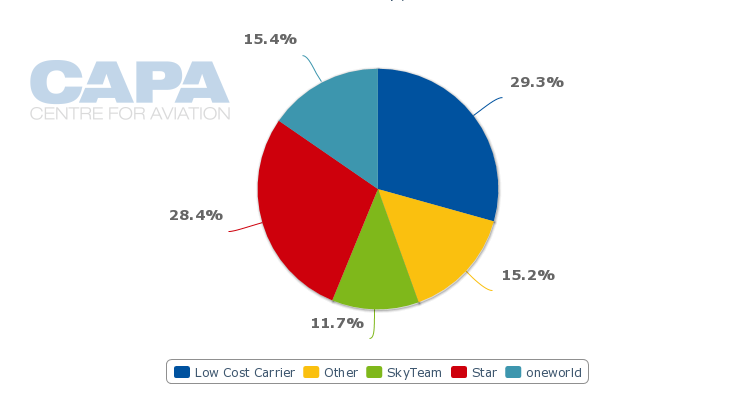 Latin America capacity share (% of seats) by alliance: after TAM moves to oneworld 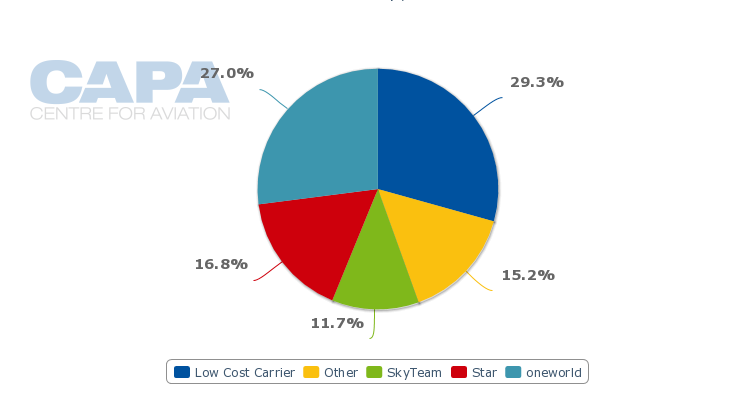 Avianca-TACA entering Star meant that the alliance had no opportunity to woo LATAM due to a Sep-2011 ruling from Chilean anti-trust court TDLC that approved the LAN-TAM merger on the condition that LATAM could not have subsidiaries in two different alliances, and could not be in the same alliance as Avianca-TACA. Star always refused to publicly acknowledge this fact, and the reality was regardless of the TDLC decision it had virtually no shot at winning LATAM and therefore keeping TAM as a member.

TAM only formally joined Star three months before the MOU with LAN was signed and therefore wasn’t nearly as close to Star as LAN has been to oneworld. With former LAN CEO Enrique Cueto appointed from the time the MOU was signed to head up LATAM the chances of LATAM ending up in Star, even without the TDLC stipulation, was virtually zero.

To comply with the TDLC ruling TAM is required to leave Star within two years of the merger being completed, or by mid 2014. As CAPA reported in Jun-2012, LATAM needed to confirm its alliance decision by mid-2013 at the latest in order to give TAM sufficient implementation time ahead of the Jun-2014 TDLC deadline.

The other options besides joining oneworld were to have TAM become independent or move to SkyTeam. But the SkyTeam option would have required that LAN leave oneworld, an unfathomable scenario, as LATAM was prohibited by TDLC from having subsidiaries in two different alliances. While LATAM repeatedly said it was considering the independent option for TAM while keeping LAN in oneworld, this was probably just a tactic to give the group some negotiating power.

Star was not about to reverse a decision to let in Avianca-TACA, which was halfway through the process of joining Star when the TDLC decision came out, just to have the opportunity to woo LATAM given the odds were not in its favour. While there is a huge gap between LATAM and Avianca-TACA, which is now the second largest airline group in Latin America, Avianca-TACA along with Copa will give Star sufficient presence in the region once all of the Avianca brands enter the alliance.

So far only four Avianca-TACA subsidiaries – Colombia-based Avianca, El Salvador based TACA, TACA Peru and TACA Costa Rica (also known as LACSA) – have joined Star. But Ecuadorean subsidiary AeroGal is also now in the process of joining and Avianca Brazil is expected to follow. AeroGal along with TACA, TACA Peru and TACA Costa Rica are all being rebranded later this year and will assume Avianca’s AV code, meaning that essentially Star will have one very big member accounting for about 8% of capacity in Latin America rather than five separate members.

See related article: TACA continues expansion in Peru with A330s ahead of rebranding as Avianca

Avianca Brazil was not initially accepted by Star with its sister carriers due to an objection by TAM. But that objection is now moot and Star needs Avianca Brazil more than ever. Avianca Brazil is now working on upgrading its IT systems to prepare it for possible Star membership. Avianca Brazil is fully owned by Synergy Aerospace, which is the largest shareholder in Avianca-TACA Holdings and in 2012 made an ultimately unsuccessful bid to buy Star member TAP Portugal.

See related article: Avianca Brazil to slow down expansion in 2013; to benefit from Star membership

It is the Brazilian domestic market that is critical to any global alliance. Brazil has the sixth largest economy in the world and has the fourth biggest domestic passenger market. Much of the recent economic growth has been in the country’s dozens of secondary cities that are mostly only served domestically. While growth in the domestic market slowed to a still healthy 7% in 2012, it was one of the fastest growing markets in 2010 and 2011, and will likely see significant growth in the medium to long-term.

Brazil was one of oneworld’s (and LAN’s) biggest weaknesses

oneworld has always been strong in Latin America, thanks to LAN’s always-growing portfolio of carriers and American Airlines, which has by far the most foreign carrier capacity in the region (over 400,000 weekly seats). But Brazil was a big white spot in its network and in the LAN portfolio.

Hence, oneworld breathed a collective sigh in Aug-2010, when LAN decided to merge with TAM with LAN the leading entity in the transaction. Essentially that is when oneworld won TAM and Brazil, although technically the victory did not occur until 07-Mar-2013, when oneworld was finally able to vote in TAM along with TAM Paraguay and LAN Colombia as new members during a board meeting in Hong Kong. (TAM Paraguay and LAN Colombia will be affiliate members.)

The pressure now turns to Star to confirm Avianca Brazil as a replacement for TAM in Brazil and to SkyTeam. Gol so far has resisted SkyTeam’s courtship, even after SkyTeam founding member Delta Air Lines acquired a minority stake in Gol and gained a board seat at the Brazilian carrier in late 2011.

Gol in recent years built up its own strong portfolio of partners, what it refers to as “the Gol alliance”. But its ability to build an independent portfolio of partners exploited the fact that TAM was in Star, leaving all oneworld and SkyTeam members with essentially no feed in one of the world’s biggest domestic markets. While still a low-cost carrier, Gol has an attractive domestic network, and in 2012 accounted for 39% of domestic RPKs in Brazil.

Gol will likely lose its codeshare partners that are current or pending oneworld members including American, Iberia and Qatar (while oneworld is open to having its members work with carriers outside the alliance, TAM represents a better fit for these carriers than Gol). With Avianca Brazil lined up as a new Star member, Gol will not be able to forge strong ties with Star members that will likely drop their links with TAM (although Gol will be able to maintain interlines with Star members such as Singapore Airlines). Gol therefore will naturally get closer to its SkyTeam codeshare partners – including Aerolineas Argentinas, Aeromexico, Air France and Delta – and will likely link up with more SkyTeam members, pushing it more towards the alliance.

SkyTeam has been looking at establishing a new partnership platform for hybrid and low-cost carriers that Gol could potentially help launch. The platform falls short of full membership and could provide an attractive alternative solution, although Delta and SkyTeam would probably prefer to see Gol join as full members.

But it could take some time for Gol to make an alliance decision as the carrier is now focusing on getting its own house on order, having encountered financial problems since acquiring smaller LCC Webjet in 2011.

If it succeeds at wooing Gol, SkyTeam would see its share of seat capacity in Latin America increase to about 25%, putting it in second place behind oneworld’s approximately 27% share. Star would be left in third, with a 19% share, assuming it secures Avianca Brazil. 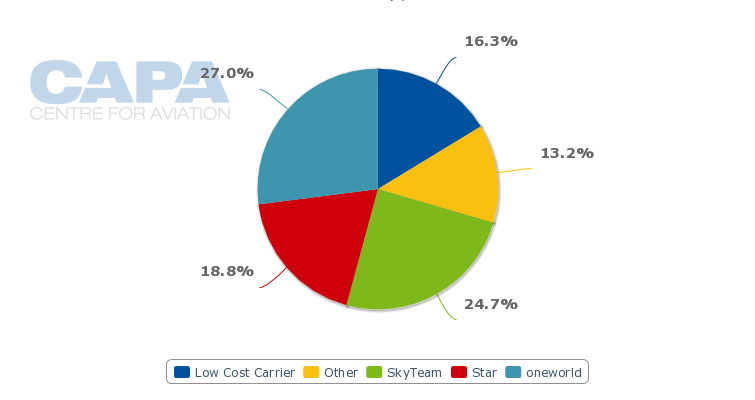 Once Gol and Avianca Brazil makes their decisions, the alliance puzzle in Latin America would essentially be complete with over 70% of seat capacity aligned. This represents a complete reversal from the market landscape of early 2010, when over 70% of capacity in the region was still unaligned.

The only possible additional alliance moves in Latin America would come in Mexico, which is Latin America’s second largest market after much bigger Brazil. Hybrid carrier Interjet and LCC Volaris could potentially be in play as Star and oneworld look to counter SkyTeam, which has Aeromexico as a founding member.

Volaris would be a Star candidate given its ties with TACA and the Kriete family, which now owns a stake in Avianca-TACA as well as Volaris. That could leave Interjet for oneworld, which lost its Mexican member in 2010, when Mexicana ceased operations. But Mexico is not a critical market and neither oneworld nor Star will be too concerned if SkyTeam remains as the only alliance with a Mexican member.

LAN Colombia joining oneworld was as much a foregone conclusion as TAM joining. In late 2010 LAN purchased Aires, converted the former LCC into a full-service carrier and in late 2011 re-branded in LAN Colombia. As in the case with all of LAN’s new affiliates, it was inevitable LAN Colombia would end up in oneworld. LATAM in its 07-Mar-2013 announcement said LAN Colombia would formally join oneworld in 4Q2013.

LAN Colombia transported 21% of domestic passengers in Colombia in 2012, second only to Avianca’s 58% share and ahead of Copa’s 8% share, based on Colombian CAA data. LAN Colombia only had a 1% share of Colombia’s international market in 2012, but the carrier is rapidly growing its international operation and recently introduced its first widebody aircraft.

While SkyTeam lacks a Colombian member, Brazil is the only market that really is a must for every alliance to have a local member. In a few other medium size Latin American markets, two of the three alliances also have members and there is no need for the third alliance to be overly concerned.

The alliance battle over Latin America has essentially concluded

As Latin America has emerged as an important growth market, the region has deservedly captured the attention of the alliances. Latin America’s leading airlines have also improved their standards over the last decade, making them suitable for the global alliances.

Consolidation in Latin America, meanwhile, has helped the alliances grow their penetration in the market while also creating tumultuous situations. The dust has now settled with oneworld at the top. But Star and SkyTeam should soon have enough of the market covered to conclude that all three in this case are winners.