A slight majority of European carriers’ shares were down on Tuesday (16-Feb-2010), as oil prices surged 3.9% to USD77.01. Wider markets meanwhile surged higher due to rises in the banking sector, after Barclays posted a better than expected FY2009 results. Shares then continued to gain as US markets opened higher.

IATA reported airlines have lost six years of premium travel growth during the global financial crisis, with European airlines suffering badly. During 2009 there was a 25% fall in intra-European premium travel, according to IATA. By December numbers were still 9.7% down on the previous year. The airline body stated that Economy travel suffered much less in this market, falling 3.2% during the year as a whole and rising 1.9% year-on-year in December, adding a "significant structural shift in business travellers from premium to economy seats on this short-medium haul market region accentuated the decline in premium travel and moderated the fall in economy".

Turkish Airlines' (-0.9%) shares slipped, despite reportedly posting a net profit of EUR149 million for FY2009, as gross sales amounted to EUR3.3 billion for the year. Passenger numbers for the first nine months of 2009 rose 10.1% year-on-year, to 18.6 million.

Air Berlin in talks to increase stake in NIKI

Air Berlin (+1.9%) gained after confirming it is in advanced negotiations regarding increasing its shareholding in NIKI Luftfahrt GmbH. The negotiations have not been completed yet and Air Berlin has not yet obtained the approval of its Board of Directors. See related article: Air Berlin in negotiations to raise stake in NIKI; Thai to increase stake in Nok?

Aer Lingus (+5.9%) and Aeroflot (+6.3%) meanwhile made the biggest gains of the day. Aeroflot commenced transferring international services to Moscow Sheremetyevo Airport’s Terminal D. The airline’s Skyteam partners will be transferred to the new terminal later in the year.

Other stories in today’s Europe Airline Daily include: 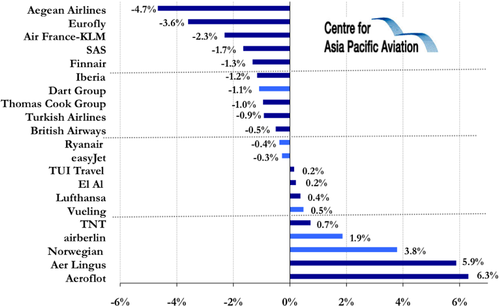