Turkish Airlines (+2.3%) was the day’s biggest gainer after announcing an agreement with US Airways to expand codeshare service between Turkey, Europe and the US. The agreement includes THY's service between Istanbul and New York JFK, Chicago O'Hare, Frankfurt, Munich, Zurich, Adana, Izmir, Antalya and Ankara. US Airways service includes routes between New York JFK, Charlotte and Phoenix to Frankfurt, Munich, Zurich and Chicago O'Hare.

Vueling announced (18-Jul-2010) passenger numbers have increased 81% year-on-year in the 12 months since merging with clickair, handling more than 10 million passengers. Almost 3.5 million (30%) of these passengers originated outside Spain.

Ryanair (+1.8%) gained after reporting a better than expected net profit of EUR93.7 million for the three months ended 30-Jun-2010. However, this was a decline of 23.8%, which the LCC attributed to Icelandic volcanic ash related costs.

British Airways (-1.2%) declined after cabin crew rejected the carrier’s latest offer, which included a 2.9% pay rise in 2011 and 3% in 2012, a possible expansion of work at Gatwick Airport, non-victimisation of workers caught up in disciplinary cases and the partial reinstatement of staff travel.

The decline was despite more positive news for BA during trading, with the US Department of Transportation (DoT) approving the carrier’s application with American Airlines and Iberia to establish a joint business governing trans-Atlantic services and to expand their cooperation as a result of the DoT's recent decision to grant oneworld carriers antitrust immunity. 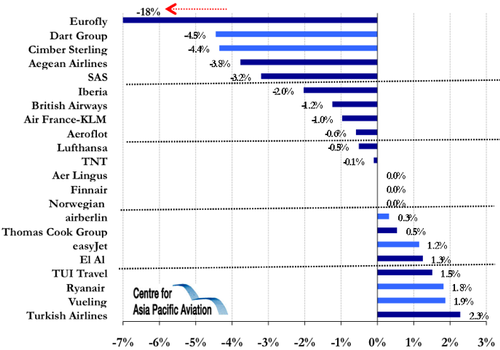