The A380 becomes mainstream, with 103 now in service: which airlines, destinations, stage lengths?

There are 103 A380s in service as of early May-2013. Emirates has 33 and Singapore Airlines has 19, so when assessing network scheduling, these two and their hubs predominate: of the 1,048 weekly A380 flights, 402 are from Emirates alone. Dubai and Singapore airport see the most A380 flights.

But there are some less predictable statistics. The airport to see the most A380 operators is Hong Kong followed by Paris and Los Angeles. The largest A380 destination that is not (yet) an A380-hub is London Heathrow. The UK and USA are the most common A380 destinations after Australia, Singapore and the UAE. Asia, not the Middle East, sees the most A380 flights; South America sees none. Guangzhou-Shanghai Pudong is the shortest A380 route at 1,202km while Los Angeles-Melbourne is the longest at 12,751km. Qantas and Lufthansa have the highest average sector length while Thai Airways is placing the most number of cycles – about two – on its aircraft per day. Qantas and Air France are placing the least (just over one).

The biggest uptake of the A380 has been among the airlines of the faster growing regions of Asia and the Middle East. Just under 83% of the aircraft are operated by airlines based in the countries of these regions. This profile is likely to continue in almost similar vein, as 123 of 160  of the aircraft type currently on order are also destined for these regions, according to CAPA's Fleet Database. 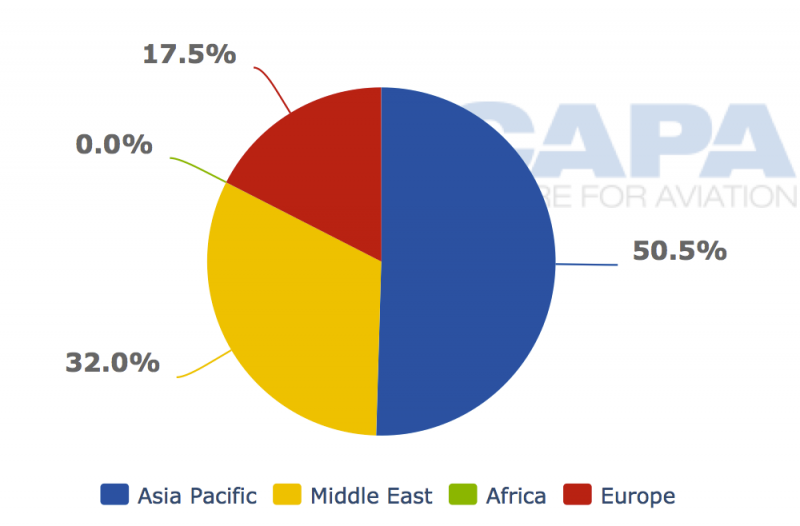 Emirates is the largest operator of the type, with 33 A380s, followed by Singapore Airlines with 19, Qantas with 12 and Lufthansa with 10. All other airlines operate a single-digit number of A380s. 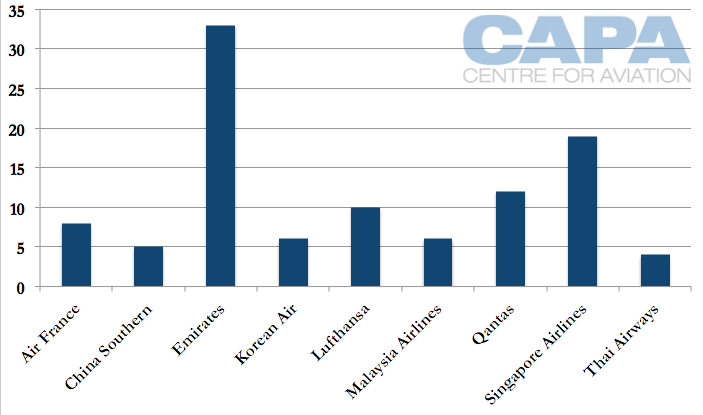 Emirates and Singapore Airlines – largest operators – have most routes

This delivery profile corresponds to the number of individual one-way routes (Dubai-London-Dubai counts as two) operated by airlines. All airlines so far have simple schedules with no triangular routes. All flights are direct non-stops except for Qantas' Sydney-Dubai-London Heathrow and Melbourne-Dubai-London Heathrow (and return) services.

Emirates once again has the highest number of routes, at 46, followed by 20 at Singapore Airlines and then 12 at each Lufthansa and Qantas. 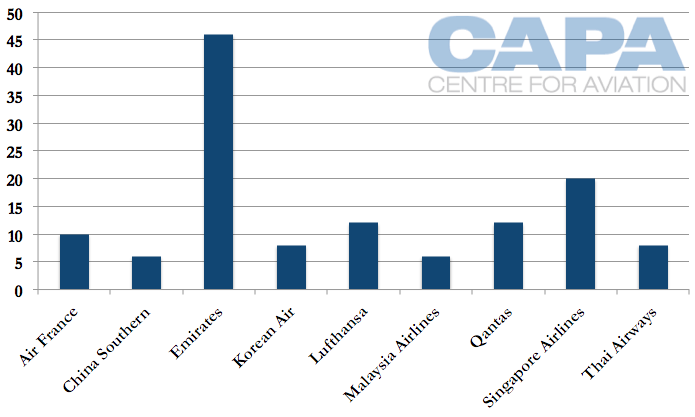 One-fifth of routes overlap, all involving Emirates or Singapore Airlines

Of the 128 routes airlines operate, 28 (22%) are duplicates and see capacity from two operators, including either from Emirates or Singapore Airlines. There are no routes with three or more airlines overlapping, reflecting lack of liberalisation but also the limited A380 customers.

The Australia-London overlapping flights between Emirates and Qantas are not competing as the two have extensive cooperation on those routes as part of their landmark alliance.

For the week 20-May-2013 to 26-May-2013, 1,048 A380 flights are scheduled. Emirates has the lion's share with 402 routes. Singapore Airlines, the next largest, has less than half with 190 flights. All other operators have a double-digit number of A380 flights. The lowest number of flights goes to China Southern, which has the second-smallest A380 fleet.

China Southern has struggled to receive permission from Chinese authorities to operate its A380s on long-haul routes. Beijing broadly limits each airline to operate routes from its home base. China Southern's base at Guangzhou does not have sustaining premium traffic and its effort to operate out of Beijing clashed with Air China's stronghold there. Cooperation talks between the two carriers failed. 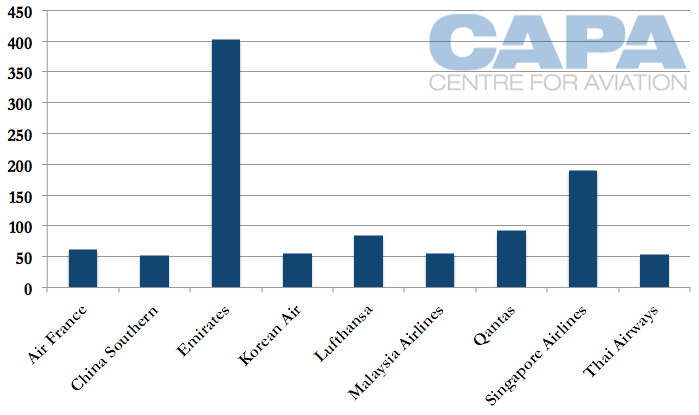 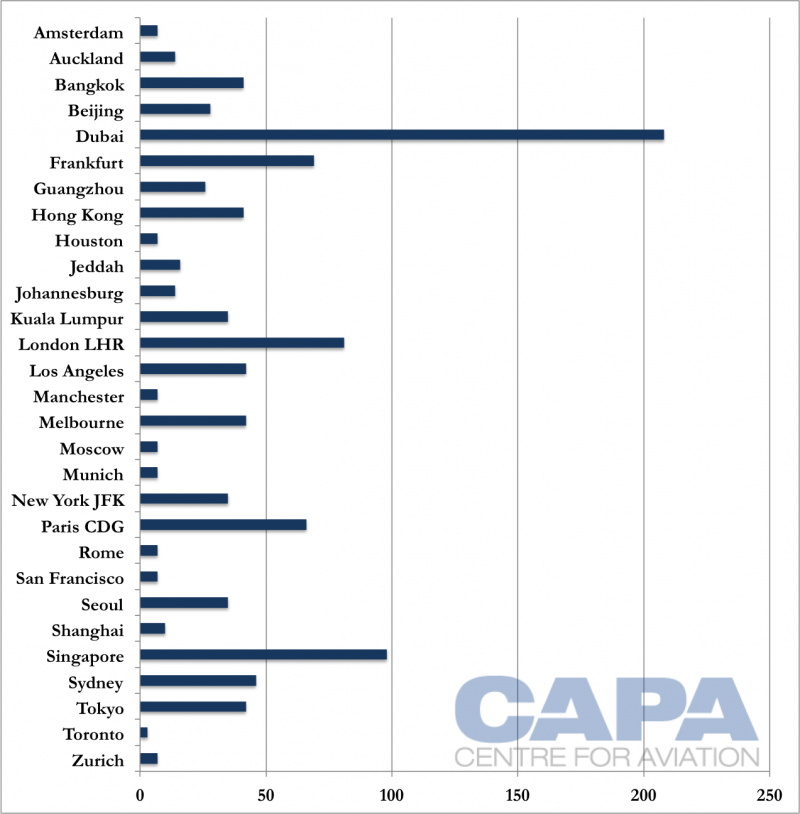 Hong Kong sees largest number of A380 operators, then Paris and Los Angeles

This frequency reflects volume and drive for utilisation rates: Hong Kong is nestled between North Asian and Southeast Asian hubs, allowing for relatively short trips between long-haul sectors, and combined with the airport's limited slots, it makes an ideal hub for Asian airlines, especially those like Malaysia Airlines and Thai Airways that are not as bullish on the A380's prospects as they were when they ordered the type a decade ago in an environment of lower competition and fuel prices. All Asian A380 carriers except China Southern operate A380s to Hong Kong (China Southern briefly had a Hong Kong-Beijing service).

Hong Kong's Cathay Pacific has not ordered the A380, a decision taken as a result of its emphasis on frequency. While some high-frequency long-haul routes (London Heathrow, upwards of five daily, and New York JFK, four daily) may be pressed for further frequency growth, growth in these markets should be re-directed to secondary cities Cathay can serve directly; its footprint in Europe is light at seven destinations while in North America it is being over-shadowed by All Nippon Airways and Japan Airlines, which are using 787s to open second-tier cities.

For example, JAL flies non-stop to Boston, and commands a pretty premium for that, while Cathay would have to rely on connecting passengers at its Chicago or New York destinations. On the short-haul side, short-haul A380 flights in Asia have yet to be shown to be profitable in any sustaining quantity.

The hesitation from Malaysia Airlines and Thai Airways in finding suitable routes is also reflected in their selection of Paris CDG as a destination. They see it has the volumes to potentially support their A380s but without the yield pressure at London Heathrow due to all of the carriers there (MAS operates to Heathrow as well).

UK and USA most common A380 countries after Australia, Singapore & UAE

China Southern commences A380 Guangzhou-Sydney services in Oct-2013 while Emirates will add a second-daily A380 Sydney service as well as a continuation to Auckland, New Zealand. Expansion of the Malaysia-Australia bilateral could allow MAS to fly its A380s to Australia, which it originally planned to do but is nestled, for now at least, in other countries. This will see Australia overtake Singapore as having the second-most number of A380 flights. (This could shift back to Singapore once the carrier receives its recently-ordered A380s.) 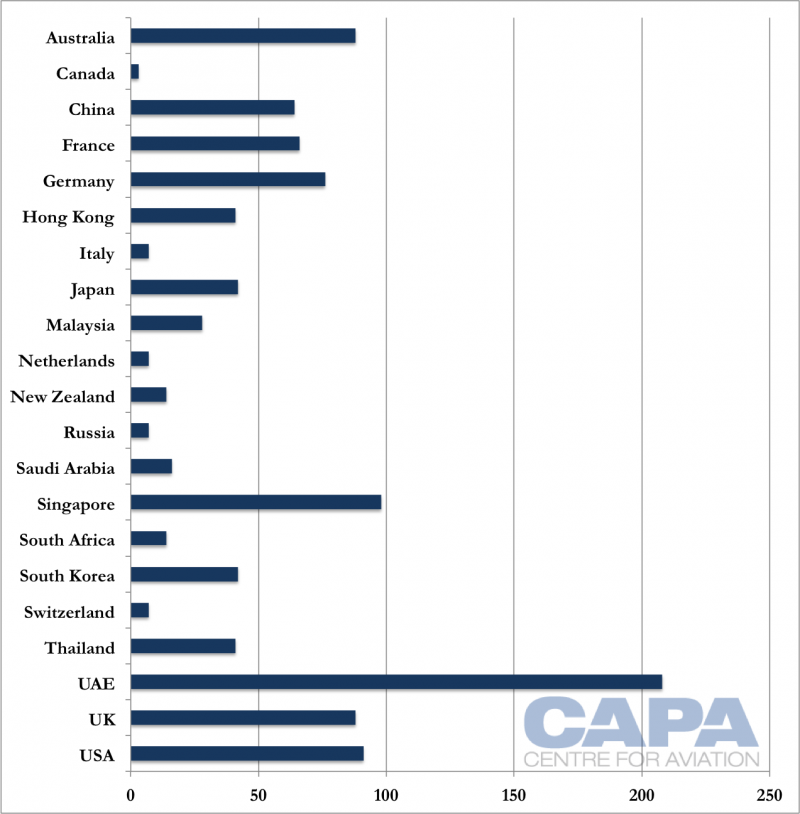 Asia sees the most A380 flights; Africa the least and South America none

It is Asia, not the Middle East, that sees the most A380 flights. While the Middle East has strength from Emirates, a number of those services are to Asia while Asian routes feature heavily amongst European operators. Intra-Asian services (to Hong Kong) from Asian operators further boosts Asia's dominance. And that will continue: Air France and Lufthansa will deploy their A380s to Shanghai after finally receiving government approval while Hong Kong (and Los Angeles) are the initial long-haul routes for British Airways' forthcoming A380s.

The Middle East is not even the second-largest region for A380 flights; it is Europe. Again, a number of Emirates services are to Europe while Asian carriers feature Europe prominently in their A380 route maps. Unlike in Asia, there are no regularly scheduled intra-European flights (Air France briefly had some for training, and British Airways will do the same). While the Middle East, and Dubai's Emirates especially, have a number of A380s on order, their continued deployment to largely Europe or Asia will keep this distribution in check, but as Emirates ramps up A380 deliveries the Middle East will overtake Europe as the second-largest A380 destination.

Africa has a lonely 14 A380s flights a week, seven each from Air France and Lufthansa to Johannesburg. But South America so far has no A380 routes. 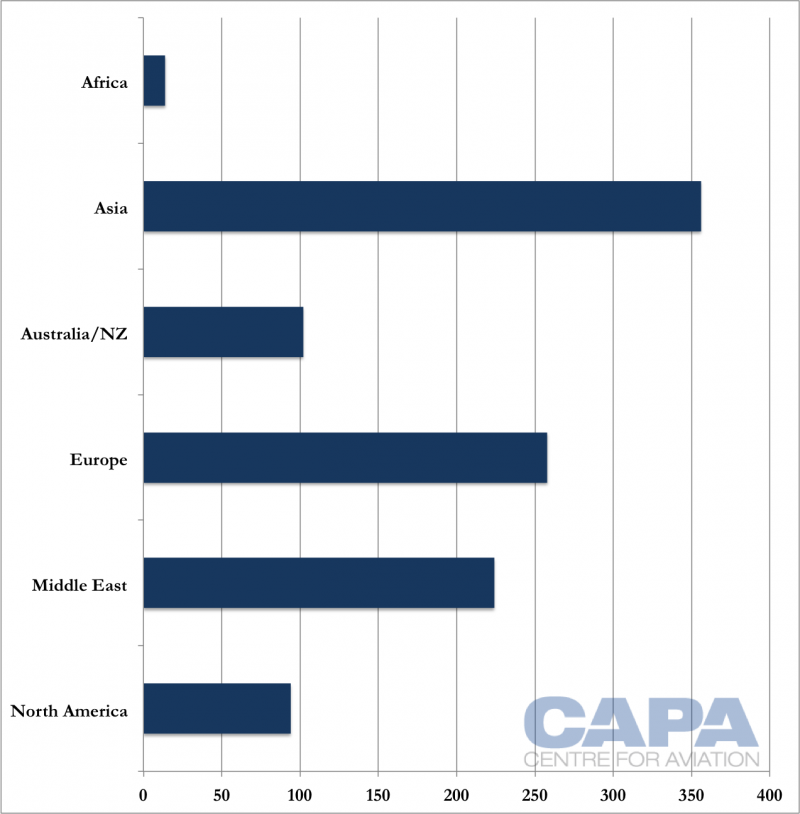 Of the 10 shortest routes, Emirates operates on five. The shortest A380 route title goes to China Southern, operating the 1,202km route between Guangzhou and Shanghai Pudong. The service sees pressure, having been reduced from daily to five weekly. While traffic is large on the route, frequency is key, and replacing a narrowbody or A330 with the A380 on one flight, as China Southern has does, causes over-capacity; China Southern's A380 service between Guangzhou and Shanghai Pudong is often the most discounted service of the day.

Hong Kong features prominently in the list, relating to efficiency from scale as previously discussed, which also leads Emirates to have so many short sectors. With a large fleet it has the scale to use aircraft that would otherwise sit on the ground (especially in Australia), delivering structural cost savings.

The longest A380 routes are operated by Qantas (Los Angeles to Melbourne and then LA-Sydney) while the third- and fourth-longest operated by Emirates and Qantas from Dubai to Sydney and then Dubai to Melbourne.

Qantas and Lufthansa have the highest average sector length

The average A380 sector is 7,517km. Only three carriers have an average below this: Emirates, Thai Airways and China Southern. China Southern's domestic A380 routes single-handedly bring down the average.

Qantas has the highest average sector length, followed by Lufthansa. 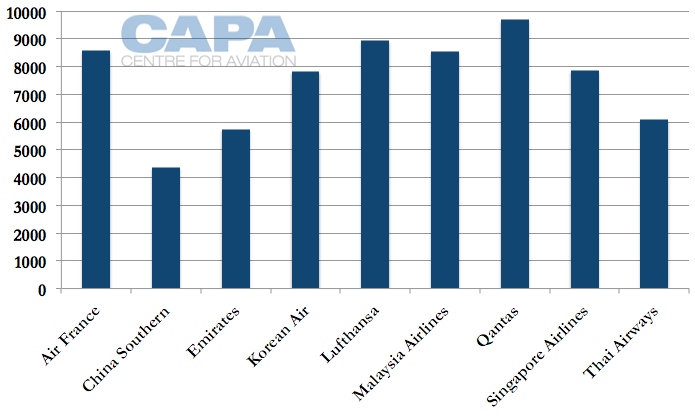 In terms of cycles per aircraft per day, Thai in May-2013 is seeing nearly two A380 flights per day per aircraft, driven by its short-haul routes from Bangkok to Hong Kong and Tokyo Narita.

Emirates has the next highest frequency of cycles, while Qantas the lowest and Air France the second-lowest with just over one flight per day per aircraft on average. 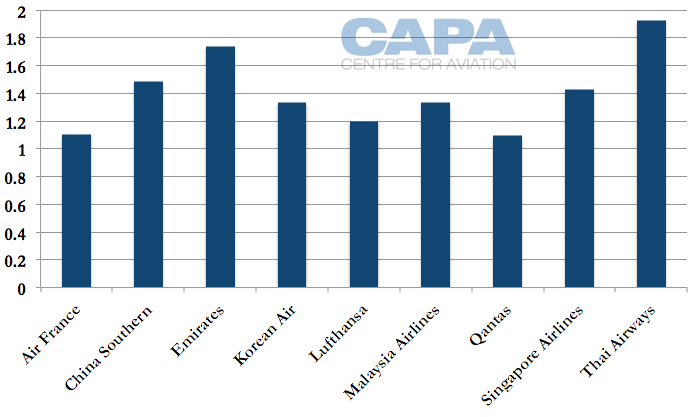 Combining individual findings, Emirates operates both some of the shortest and longest A380 routes while placing the second-largest number of cycles per day on its aircraft. China Southern operates the shortest A380 route and also has the lowest average sector length by far while not having the most cycles per day, but also certainly not the least.

As larger numbers and varieties of airline accept their A380 orders, so the variety of usages will increase, but, as the manufacturer anticipated, the predominance is for very long-haul and, frequently (Frankfurt, Hong Kong, London, Paris CDG and now Dubai) at congested airports.

Asia's dominance is clear, and even with the large number of A380s still to be delivered to Emirates (with more orders on the way if Emirates can find space at Dubai), it will be challenging to see the Middle East collectively challenge Asia as the largest A380 hub.

With growth in South America and Africa to come over the next years and decades, no doubt these destinations will see a growing share of A380 routes.