Thai Airways Chairman, Ampon Kittiampon, stated the carrier's financial performance has been better than expected, with a positive result now likely for the full year, after a better-than-targeted EBITDA of USD783 million in the 11 months to Nov-2009. Yields are also on the improve, up 10.5% in Nov-2009. Thai Airways' shares remained stable on Friday.

The results prompted Mr Kittiampon to state that the carrier is now “back on our feet”. He added, “we now have a stable financial standing, cashflow is in a safety range, load factor, cargo and passenger volumes are on the rise”.

Qantas’ shares remained unchanged on Friday, and rose the most in almost three weeks in Sydney trading this morning (shares gaining as much as 4.7% and currently up 1.8%), after the carrier stated it expects profit before tax in the AUD50-150 million (USD44-133 million) range in the six months ending 31-Dec-2009.

CFO, Colin Storrie, stated the carrier expects domestic demand to recover faster than international demand, although the carrier is now starting to see an improvement in forward bookings for international operations, but it would "be a while" until its 5% increase in fares improves revenues.

During Nov-2009, Qantas Group’s passenger numbers were up 97% to 3.5 million, driven predominantly by Jetstar growth, with a load factor improvement of 4.0 ppts to 82.3%. Yields in the five months to Nov-2009 were down 8.9% for domestic operations and -23.2% on international operations. 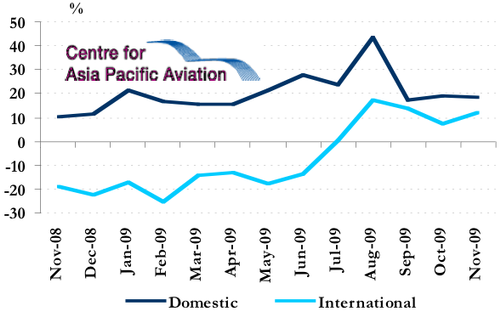 On the cargo front, cargo volume was also up by double-digits, and by a greater extent than in passenger operations, in the busy pre-Christmas period. The cargo 35.5% cargo growth was driven by growth across the board (HK/Macau: +60%, international: +40%, domestic: +34%). 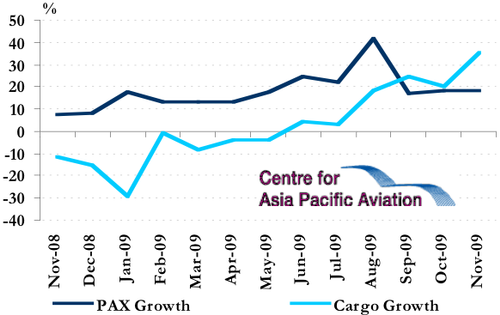 Unit revenues up among major Indian airlines in Nov-2009

The shares prices of Jet Airways, SpiceJet and Kingfisher Airlines have gained 25%, 13% and 8% in the past month, driven by sustained passenger traffic improvements, with increased passenger traffic, improved load factors and a 30% improvements in unit revenue (per passenger kilometer) among the major airlines in Nov-2009 (compared to Oct-2009 levels). 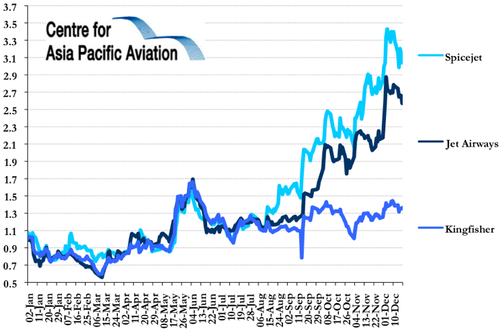 On Friday, Kingfisher's shares gained 0.9%, with Jet Airways and SpiceJet both weaker, down 3.3% and 3.6%, respectively. 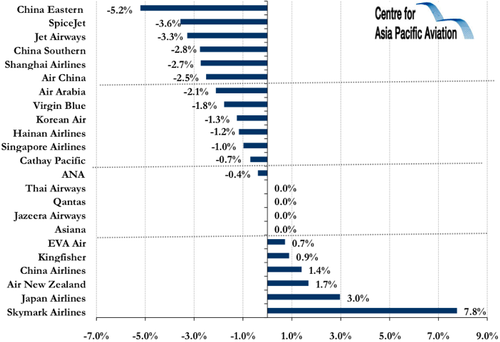