North and South American airline stocks gained on Wednesday (13-Oct-2010) as the Dow (+0.7%) rose to a five-month high. US markets were up on better-than-expected quarterly results from JP Morgan Chase and Intel.

South American shares also advanced for the session. Brazil’s Bovespa (+1.0%) rose to its highest point in six months on analyst comments and speculation Chinese economic growth is accelerating. Chile’s IPSA (+2.7%) also made strong gains, boosted by a technical rebound and the US stock market.

TAM (+4.4%) made its biggest gain in two months after Goldman Sachs Group Inc recommended adding to holdings of stocks in homebuilders, mining, banking and transportation sectors. The company expects these sectors to eclipse gains made by the retailing sector, which have so far led the Bovespa higher this year. TAM’s rise was its biggest move since announcing plans to acquire LAN Airlines on 13-Aug-2010. GOL (+5.7%) also soared on Goldman Sachs’ comments.

Chilean carrier LAN (+4.3%) also gained for the day, up with the wider market.

Elsewhere in South America, Copa Airlines (-0.9%) slipped for the day. The carrier recently announced a number of changes to its winter strategy, including increases in frequencies in services from its Panama base to Aruba, Belo Horizonte and Cancun.

United Continental Holdings (-1.1%) suffered the biggest decline for the day. The group announced the day prior that Continental Airlines and United Airlines will boost services between the US and Mexico. In addition, Continental Airlines today filed an application with the US Department of Transportation (DoT) for authority to begin once-weekly non-stop service to Cancun, Mexico, from three new cities: Austin and San Antonio, Texas, and Raleigh-Durham. These Saturday services, which are subject to government approval, would begin 19-Feb-2011. The service changes are consistent with the airlines' previously announced capacity guidance. The move follows the bankruptcy of Mexicana. 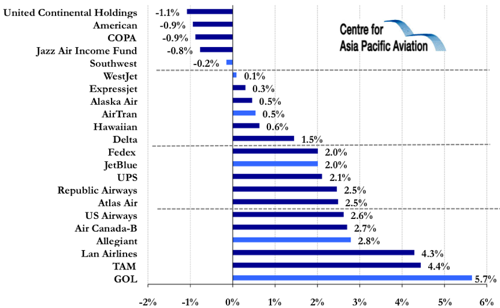