The majority of North and South American carriers shares were up again on Thursday (29-Apr-2010), boosted by another day of gains in the wider market. The Dow (+1.1%) rose on improved 1Q2010 earnings results from a number of companies and reports Greece is close to a bailout deal.

TAM this week announced plans to open a representation office in Tokyo on 27-Apr-2010, as part of plans to strengthen its presence in the Asian market. The airline will work through a GSA. The carrier already has representative offices in Asia in South Korea, Hong Kong, Thailand and Taiwan, with plans to establish a representative in India in May-2010.

LAN stated it lost USD2.6 million on hedging in 1Q2010, compared with a USD57.9 million loss in 1Q2009, with the carrier adding that it also witnessed a strong recovery in passenger and cargo business in the quarter.

Considering current market conditions, the carrier stated it maintains its expectations for 2010 with passenger ASK growth of approximately 10% in 2010. Growth in the passenger business during 2010 is expected to mainly be driven by international and regional markets.

LAN Cargo currently expects approximately 16%-18% growth in cargo capacity for 2010, mainly driven by higher utilisation of the freighter fleet, especially the two B777-200 freighters received in the first half of 2009. 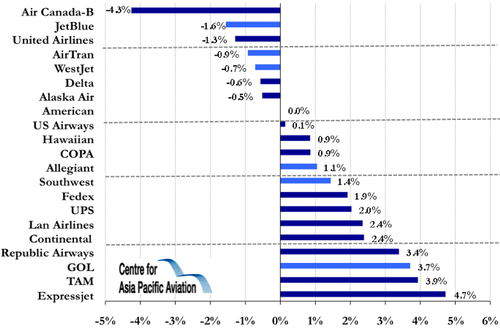