Singapore Airlines, British Airways, United Airways and Kingfisher Airlines all reported better than expected earnings for the three months ended 31-Dec-2009. The reason: they each aligned capacity levels much more closely with demand; but it was their action in slashing into labour costs that really made the difference. In a CAPA sample of airline earnings for the latest quarter ended (31-Dec-2009) only seven of 25 airlines reported lower wages bills, despite industry capacity reductions in Oct-2009, Nov-2009 and Dec-2009 of 3.3%, 1.4% and 0.7%, respectively. This does not augur well for 2010, with unions expected to push for higher wages as the airline traffic recovery takes hold.

Singapore Airlines slashes staff costs by 26.2% - is it sustainable?

Singapore Airlines reduced its staff costs by a remarkable 26.2% year-on-year in its fiscal third quarter ended 31-Dec-2009, making it best-in-class in the Asia Pacific region (behind the Indian airlines) and taking it back to a staff cost/ASK level last seen in 2003. SIA achieved staff cost reduction well ahead of the 10.4% fall in group capacity, through a combination of executive salary cuts and reduced working hours. Meanwhile rivals Qantas, Emirates and Cathay Pacific will be watching with interest in coming quarters to see how much SIA’s staff costs snap back once the crisis measures are wound up. Meanwhile, the short term impact should show up in SIA's bottom line. 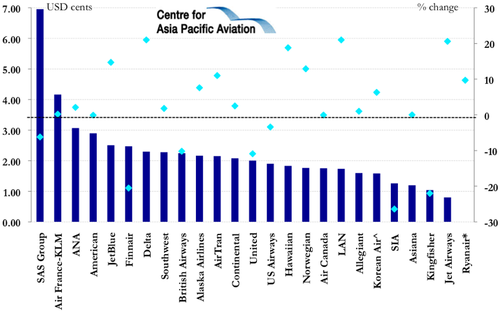 Source: Centre for Asia Pacific Aviation & company reports
NB: US carrier ASMs have been converted to ASKs to facilitate comparison. Unit costs are not adjusted for stage lengths
^For international operations only
*Quarterly ASK not available

The worst in class again was SAS, with unit labour costs still over three times the industry average. The Scandinavian carrier has made some recent progress in improving its staff costs, but it still faces a massive task in attaining some semblance of parity to its rivals in the industry. Finnair too, despite substantial cost cuts, still remains exposed, with costs higher than its other main long-haul competitors, such as British Airways, and well above Norwegian.

Air France-KLM disappointed investors when it announced this week that it expects further deep losses in the final quarter ending 31-Mar-2010. Its third quarter labour costs were virtually unchanged, despite a reduction in passenger capacity of almost 5%. It remains well outside the safety zone with its higher labour cost profile.

All Nippon Airways’ unit labour expenses are also high (and rising as the airline expands), reflecting the high cost environment in Japan (where the yield profile has also been high).

A key issue for both ANA and Japan Airlines and their future trans-Pacific JVs with United/Continental and American Airlines, respectively, is the expected reduction in yields under revenue-sharing deals with their US counterparts. Japanese carriers’ fares on their own metal are significantly higher than US airlines on US routes, which could create further margin squeeze for the Japanese airlines and the need to continuously focus on cost reduction.

NB: CAPA provides continuous updates and analysis on aviation developments such as these globally through its range of Daily publications. They form the backbone of the CAPA Membership service, which can help your organisation stay in the know. CAPA is also offering a free Apple iPad with each new or upgraded CAPA Diamond Membership until 31-Mar-2010. Email us to become a CAPA Member today claim your iPad! [more info about iPad offer]

In the US, JetBlue’s unit labour costs are approaching those of American Airlines (which unlike its US network rivals has not “enjoyed” the cost-reducing benefits of a bankruptcy filing). It is probable that JetBlue will move its corporate headquarters away from high cost New York to a lower cost alternative in Orlando.

Southwest’s unit labour costs are just below Delta’s, with the world’s largest carrier experiencing a 20% blow-out in staffing costs last quarter. Southwest held its unit staff costs just above zero, but it slashed its capacity by 7.7% in the Dec-2009 quarter and is on the path to a higher cost future in both labour and fuel costs.

See related report: US airline outlook: Fundamental restructuring is in the wind but will the industry revert to type?

IATA stated this week that high unemployment in many countries should keep wages from rising and economic recovery should improve productivity. According to IATA, “labour costs should not rise much in absolute terms, but labour’s share [of total costs] may increase”, mainly thanks to lower fuel prices, relative to their 2008 peaks.

The industry body has released some data showing labour vs fuel costs since 2001, showing fuel costs overtook labour as the airline industry’s biggest operating cost item in late 2005. (The latest IATA data is for 2008, which does not show that effects of much lower fuel costs in 2009). 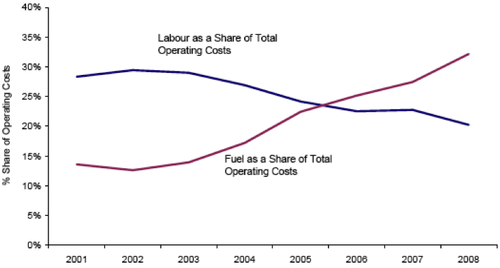 There are significant regional differences between the shares of fuel and labour costs within total operating costs.

In 2008, when fuel costs peaked, labour’s share of airline operating costs was 22-25% in North America and Europe, but only 14.7% in Asia Pacific, reflecting the relatively lower wage level in that region. However, with relatively lower labour costs, fuel accounts for a much higher proportion of total costs (36.7%) in Asia Pacific than elsewhere.

IATA stated this partly reflects the greater commercial flexibility for European airlines to undertake financial hedging of their fuel costs that has provided some protection from the sharp rise in fuel costs. However, it is also likely to partly reflect the more diversified nature of some European airlines (eg Lufthansa), where more labour-intensive activities such as ground-handling and maintenance are included within the parent company’s financial accounts. 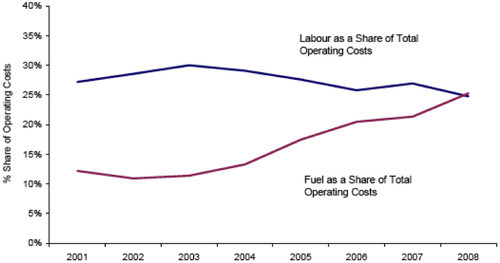 IATA stated the large scale restructuring of North American airlines since 2001 – in some cases involving a period under Chapter 11 bankruptcy protection – has enabled them to achieve “significant” improvements in labour productivity and reductions in total labour costs, as capacity shrank.

Labour’s share of total operating costs for North American airlines has fallen sharply, from 36.2% in 2001 to 21.5% in 2008. This reflects a sharp rise in the share of fuel costs over the same period, but also reflects much lower labour costs (including lower pension liabilities as a result of Chapter 11 activity). 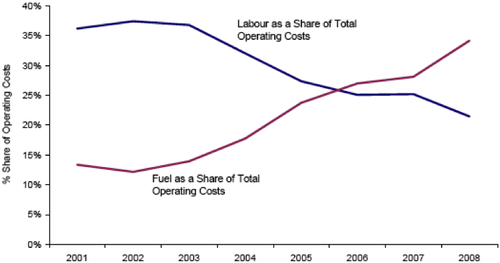 The relatively low labour costs (in developing economies rather than in Japan, Australia and New Zealand), fuel has accounted for a higher share of costs than labour for Asia Pacific airlines since 2004, according to IATA.

In 2008, fuel expenses accounted on average for 36.7% of operating costs for Asia Pacific airlines and were higher than 50% for some airlines based in this region. The region shows also a higher share of aircraft costs (rentals and depreciation-amortisation) compared to North America and Europe, as they maintain their policies of operating youthful fleets.

The result is that Asian carriers (apart from Japan's airlines) are able to maintain a valuable margin against their foreign competitors, as long as fuel costs do not dilute their advantage.

This greater exposure to higher fuel costs than airlines in North America and Europe means Asia Pacific airlines will have to work harder to reduce other cost lines as fuel prices inexorably rise over the next decade, if they are to maintain their edge. 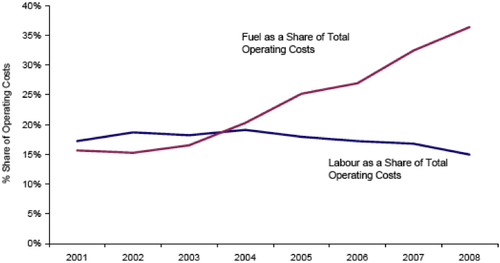 Outlook: 2010 the year for industrial confrontation

2009 was the worst year ever for aviation; global traffic declined 3.1% year-on-year and yields slumped.

With older airlines mostly heavily unionised, in many cases involving a dozen or more unions, this scale of cutback would normally have caused extensive industrial disputes. Unexpectedly, the threat did not materialise in 2009, with many unions accepting the reality of a chronic downturn for their airline employer.

The restraint shown reflected an understanding that this was a potentally life-threatening environment. So, in most cases, intelligent deals have been achieved, where the airline involved has both had the communication skills and a sufficiently obvious need to metamorphose.

But as we enter the second decade of the new century, all the signs are of gradual recovery, both in traffic numbers and profitability, as some premium market recovery occurs. This will make it less palatable for union leaders to accept the need for frugality.

Global airline capacity for Feb-2010 shows a 5% increase in seat capacity compared to Feb-2009. OAG reports this marks the sixth consecutive month in which overall airline seating capacity has shown growth. Global frequencies are also showing growth, with an increase of 4%, with a total of 2.2 million flights scheduled for Feb-2010. Global frequency and capacity in the low-cost sector are up by 11% compared to a year ago, with 40,704 more flights and 6.1 million more seats.

The fruits of recovery will be accompanied by some gradual capacity expansion (as new aircraft orders are pushed into the market – like it or not) and, for some airlines, profitability.

In these circumstances, the case for cost cutbacks – still in fact badly needed by all legacy airlines – will be much harder to plead. And the restraint shown by labour in 2009 is likely to be a thing of the past.

Here lie the seeds of a difficult year for staff relations, especially in Europe and North America.

CAPA believes 2010 is shaping as the year for industrial confrontation – and may as a result see more fundamental change, including market exit of some famous brands, than in the past year. As a minimum, there will be major shifts in the shape of some of those well-known entities, even if economic recovery starts to soften the impact.