Ryanair’s airport and government battles continue; to close Marseille base

Ryanair announced plans to close its only French base at Marseille Airport from 11-Jan-2011. The move follows the commencement of legal proceedings against it related to payment terms for the 200 pilots and cabin crew who work at the airport.

The carrier stated its Marseille base and flight crews fully comply with the European Directive on Transport Workers which allows all mobile transport workers to pay income tax and social insurance in the country they work (which in this case is Ireland as they work on Irish-registered aircraft which is defined as Irish territory) or where their employer is resident and where they are physically paid, which also in Ryanair’s case is Ireland. Unions and French authorities claim staff living in France should be declared in the. easyJet suffered a similar issue and was fined in Apr-2010 for hiring 170 staff under British contracts at Paris Orly Airport.

The four Marseille-based aircraft and 200 jobs will now be moved to airports in Spain, Italy and Lithuania, resulting in the suspension of 13 Marseille routes. Suspended routes include Agadir, Brest, Eindhoven, Lille, Marrakesh, Nador, Nantes, Palermo, Paris, Tangier, Tenerife, Tours and Venice. Ryanair will continue to operate ten routes to/from Marseille using aircraft and crews that are based elsewhere.

Separately, Ryanair yesterday confirmed its support for the UK Court of Appeal’s decision to dismiss BAA’s appeal that its UK airport ownership should be broken up to promote competition.

The LCC believes the findings apply equally to the DAA and called on the Irish Government to follow the UK Competition Commission and break up "the DAA airport monopoly".  Ryanair stated it hopes the Government will sell off Shannon and Cork airports, sell T1 and T2 at Dublin to competing terminal operators, and sell non-core DAA assets including Dublin Airport City and Aer Rianta International. According to the carrier, passenger numbers at Dublin Airport are on target to decline by 3 million passengers for the second year in a row.

The carrier last week Ryanair stated it had put its German expansion on hold due to the German Government’s introduction of a new passenger tax. Ryanair, which has three bases in Germany, stated that there is potential for Ryanair to operate 12 bases. The German Government is introducing a passenger tax of EUR8 for short-haul services, EUR25 for medium-haul services and EUR45 for long-haul.

Ryanair CEO Michael O’Leary on 12-Oct-2010 warned Minister for Transport Noel Dempsey the LCC could sue the Irish Government if it awards the Kerry-Dublin public service obligation (PSO) contract to another carrier at a higher subsidy.

Ryanair is seeking EUR660,000 in compensation from the government for cost increases imposed, including the tourist tax and increased charges from the Dublin Airport Authority (DAA) and Irish Aviation Authority, with Mr O’Leary earlier commenting that the PSO subsidies for regional services were no longer sustainable. Mr O’Leary also called for PSO contracts to be awarded to airports rather than airlines.

Ireland's Shannon Airport Director Martin Moroney stated the airport plans to take legal action against Ryanair for breach of contract. According to Mr Moroney, the carrier “failed miserably” to meet passenger targets at the airport and failed to meet its commitments under a five-year agreement as a result.  Ryanair claims one of the reasons it is cutting services at Shannon is due to the airport’s plans to increase passenger charges. However, Mr Moroney argued the LCC was cutting operations after failing to reach its targets.

Shares in Ryanair gained marginally yesterday (13-Oct-2010), up 0.3%. Also in Europe and shares in Vueling gained 0.5%, with Air Berlin, Norwegian, easyJet, Dart Group and Cimber Sterling shares all witnessing gains of over 1.5%. 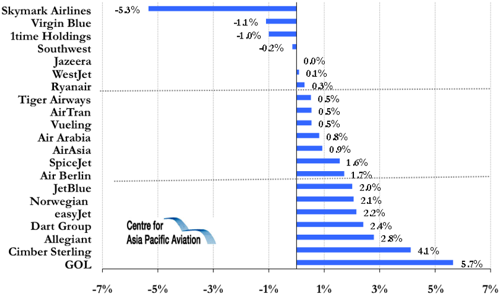