Ryanair plots the fall of Europe – 20% cut in fares planned

Ryanair unveiled a 31% reduction in second-quarter profit (slightly worse than market expectations), but reaffirmed it is confident of breaking even in the full year (ending 31-Mar-09). It previously predicted potentially deep losses for the full year.

The recent fall in the oil price has been hugely important to Ryanair's aim of triggering a bloodbath in European aviation, even though the carrier's recent hedging activity has locked in higher prices for the third quarter (Oct-Dec-08). Ryanair plans to unleash its most aggressive expansion and fare war combination in its history this Winter, citing "massive commercial opportunities...with the weakness of our competitors", according to Deputy CEO, Michael Cawley.

Ryanair had previously projected a reduction in average fares of around 5% for the second half of its financial year, but tougher economic conditions meant it is "going to be much deeper than that," according to CEO, Michael O'Leary. The carrier now predicts fare reductions of almost 12% in the ful year, with reductions of 15-20% in the third and fourth quarters, leading to losses in 3Q and 4Q (2HFY09).

The prospect of Ryanair leading 20% reductions in yields in coming months would be chilling to many of its smaller rivals.

Exceptional items in the six months to 30-Sep-08 amounted to EUR119.2 million consisting of a EUR93.6 million impairment of the Aer Lingus shareholding and an accelerated depreciation charge of EUR25.7 million on aircraft to be disposed in the financial years 2008/9 and 2009/10.

This resulted in a net profit margin reduction of 14 ppts to 12%, while the airline's operating margin fell 17 ppts to 13%, as operating profit slumped 48.4% year-on-year to EUR236.4 million. 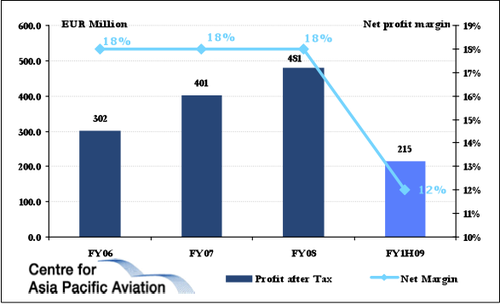 The increase in revenue was strongly supported by growth in ancillary revenues of 27.7% year-on-year to EUR322.1 million, again faster than the rate of traffic growth rate, to represent 17.8% of total revenue, an increase from 16.2% in the previous corresponding period. Ryanair is currently undertaking an aggressively strategy to boost ancillary revenue.

Passenger traffic up 19%, stimulated by 4% reduction in average fares

During the six-month period, passenger traffic increased 18.8% to 31.6 million passengers, stimulated by a 4% reduction in average fares (including baggage charges) to EUR47 per sector. 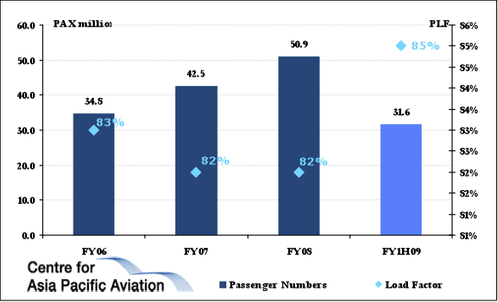 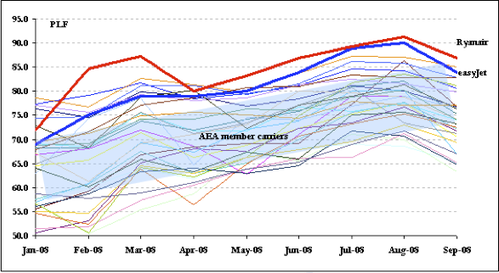 Traffic figures for Oct-08 were also healthy, with Ryanair handling 5.35 million passengers (up 18% year-on-year) with an unchanged load factor of 85%. The carrier stated advance bookings this winter are "slightly ahead of target", although this is due to repeated price promotions resulting in lower than expected fares.

During the six month period, Ryanair's revenue growth was offset by higher fuel costs, in addition to the higher level of activity and costs associated with the growth of the airline (in addition to a 2% increase in average sector length), resulting in a 44.0% year-on-year increase in operating costs to EUR1,574.2 million.

Unit costs excluding fuel fell 6% in the first half, but rose 21% including fuel (fuel costs increased from USD63 to USD125/barrel in the six month period, to account for mor ethan 50% of total oeprating costs, comapred to 36% in the previous corresponding period). The airline expects unit costs to fall by about 2-3% in the full year.

Ryanair fuel expenses as a portion of total operating expenses: 1Q05 to 2Q09 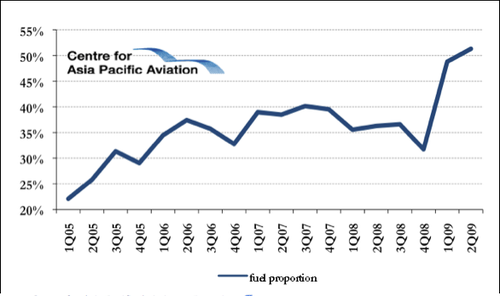 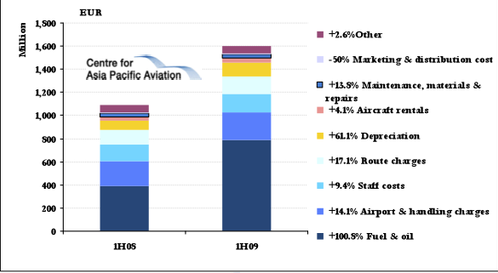 Ryanair ancillary revenue as a portion of total revenue: 1Q05 vs 2Q09

Ryanair got in late in its hedging programme and is 80%-hedged for the third quarter (Oct-Dec-08) at USD124 per barrel, but is unhedged for the fourth quarter (Jan-Mar-09). The airline has hedged 25% of its fuel requirements in both the first and second quarters of next year (Apr-Jun-09 and Jul-Sep-09) at USD76 and USD79 per barrel, respectively. It would have hedged more, but for the lack of liquidity in the market.

Ryanair fuel hedges: as at Nov-08

Spot fuel prices have recently fallen to USD60/barrel as the worldwide economic slowdown has led to a collapse in consumer confidence and consumption. Ryanair stated it would "continue to closely monitor fuel prices and look for opportunities to extend our hedges at these much lower oil prices".

Grounding 10% of fleet over Winter; but overall aggressive expansion to continue

Ryanair, meanwhile, has implemented its plans to ground 15 Stansted aircraft and four Dublin aircraft over the European Winter. In total, the airline expects to ground approximately 10% of its fleet (or 20 aircraft) over the Winter Schedule. This is more than double the number of aircraft it grounded last Winter. According to Ryanair, at these airports "high airport charges make it more profitable to ground aircraft rather than fly them through the Winter".

Despite the cutbacks, Ryanair's traffic is expected to grow by approximately 9% over the European Winter as the airline moves capacity to lower cost airports and bases and more profitable markets. Accordingly, passenger volumes for the full year are expected to grow by 14% year-on-year to 58 million passengers.

The airline's fleet will also continue to grow. Ryanair plans to increase its fleet in FY09 to 195 aircraft and expects to operate a fleet size (net of planned disposals) of 279 aircraft by 2012. The airline has also upwardly revised its fleet growth plans for FY2010 through FY2012, as follows: 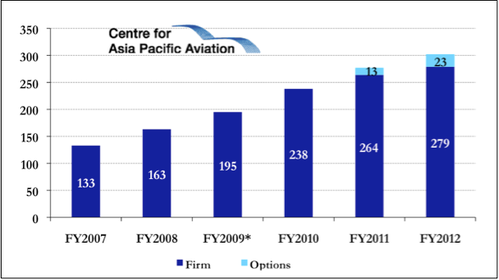 Source: Centre for Asia Pacific Aviation & Ryanair
* subject to the resolution of the Boeing strike

Base closure in Spain; two new bases in Italy

Valence base closure: Ryanair, meanwhile, announced the closure of its base at Valencia, resulting in the suspension of over 70 weekly frequencies and approximately 750,000 passengers p/a, effective Nov-08 (routes affected include services from Valencia to Bologna, East Midlands, Eindhoven, Liverpool, London Stansted, Maastricht, Malta, Oporto, Paris Beauvais and Santiago de). The carrier states its withdrawal is the result of a dispute with local authorities regarding the allocation of marketing funds. Ryanair plans to add another base to its network, with an announcement to be made by the end of Oct-08.

Ryanair's Valencia base represented the bulk of growth at the airport over the last two years, most of which was international traffic. Since Ryanair announced its Valencia base in Aug-07, it has increased its passenger traffic by over 25% in 2008 to an expected annual outcome of 1.5 million passengers (out of a total of 6 million at the airport).

Ryanair also announced plans to base two B737-800s at Trapani from May-09 and launch two new domestic (Turin and Venice Treviso) and three new international routes (Oslo Torp, Brussels Charleroi and Paris Beauvais), with plans to increase frequency on existing routes to Rome and Milan.

Additionally, Ryanair plans to launch seven new international and four new domestic routes from Bolognia from Mar-09. The new routes increase service from Bologna to Bari, Brindisi, Dusseldorf, Lamezia, Paris (Beauvais), Trapani, Edinburgh, Katowice, Oslo (Torp) and Constanta. The carrier forecasts it will transport 800,000 passengers p/a, with the LCC stating it is on target to over 2 million passengers through Bologna to 25 destinations by 2012.

However, Ryanair also confirmed it would not open a base at Forli, after the airport reportedly withdrew from an earlier agreement. As a result, the carrier will abandon plans to launch six new domestic routes from the airport. Ryanair expected to carry over 500,000 passengers to/from Forli in 2009. Ryanair's Forli routes were due to operate to/from Alghero, Bari, Cagliari, Lamezia, Olbia and Palermo from Dec-08.

Bad news for Shannon?: Ryanair has also threatened to reduce capacity at Shannon by 75% from Nov-09, if the Irish Government implements its planned EUR10 air travel tax. A reduction in business of this order could devastate Shannon Airport, where 60% of the total business is accounted for by Ryanair.

Ryanair forecasts a particularly bleak outlook for the rest of the European airline industry, expecting more carriers to fail this Winter, due to "unsustainable losses and insufficient cash reserves".

While Ryanair has deep enough pockets to ride-out the worsening economic environment, with cash reserves of over EUR2 billion, the carrier forecasts that only four other European airlines will survive the turmoil, including fellow LCC easyJet, and full service carriers British Airways, Lufthansa and Air France-KLM. According to Ryanair CFO, Howard Millar, "there will be less players in this market and that's the reality of what's happening. This industry is changing and there will be enormous opportunity for those left standing.''

However, such bankruptcies create a dilemma for Ryanair: does it maintain its currently policy of sticking to secondary airports and negotiating low airport charges, or does it enter higher-cost, busier primary airports, to more effectively benefit from airline collapses and capacity reductions? Most of the airline failures to date have impacted gateways where Ryanair has a direct presence, which would encourage the LCC to maintain its present strategy although further failures on the scale of Sterling at Copenhagen would raise some questions for Ryanair's network planners.

The outlook for the remainder of the current fiscal year (2008/09) is dependent upon fares and fuel prices. Ryanair expects the recession will continue to drive down oil prices and fares over the European Winter, with Ryanair to continue to respond, as always, with lower fares and aggressive price promotions to keep load factors and passenger numbers growing, accepting short term pain for long term gain. Ryanair has launched 25 major fare sales, covering over 35 million seats, in the past five months alone.

Ryanair expects full year full year average fare could fall by almost 12% (including the 15-20% reduction this Winter), although these lower fares will be largely offset by lower fuel costs (currently USD73/barrel in Q4). As a result, Ryanair's previous guidance remains unchanged and the carrier remains "confident" it will break even for the full year.

The ultimate aim of Ryanair's aggressive approach is that it will be able to benefit and grow from opportunities arising from the "upcoming Winter's wave of airline bankruptcies and consolidations", which Ryanair believes are inevitable.

Overall, Ryanair is going for the jugular this Winter. It stated continuing bankruptcies and consolidations would create even more opportunities for Ryanair to grow. But, crucially, Ryanair may need to enter airports it has avoided in the past to fully capitalise on carrier failures. Whether the aggressive LCC and airport managers can agree to terms is another question.