Qantas has announced a bold initiative to set up a new low-cost carrier joint venture in Hong Kong with its long-time Chinese partner, China Eastern Airlines. Jetstar Hong Kong will operate short-haul routes within Asia – including to mainland China, Japan, South Korea and Southeast Asia – from 2013 with an initial fleet of three A320s, growing to 18 A320s by 2015.

It is a key stepping-stone for the Qantas Group as it grows its Jetstar brand across the region. Jetstar currently has entities in Singapore with Jetstar Asia/Valuair and in Vietnam with Jetstar Pacific. Jetstar Hong Kong will be the group's fourth Asian affiliate as Jetstar Japan, a new joint venture with Japan Airlines that was announced last year, will be launching services in Jul-2012.

The Jetstar group will bring considerable low-cost experience to the new venture, which will become the first short-haul low fares airline to be based in Hong Kong. The LCC model is, however, a new concept for China Eastern, which is following the pattern of several of its full service counterparts in Asia in working with an experienced partner in the establishment of a LCC offshoot.

In announcing the tie-up with Jetstar on 26-Mar-2012, China Eastern chairman Liu Shaoyong stated: “We believe there are huge opportunities for the Jetstar low fares model throughout Asia, including Greater China, and are excited to be the first major Chinese carrier to bring this travel option to the region.” Mr Liu added Jetstar Hong Kong would “complement” its existing business model.

Jetstar Hong Kong being established 'on the doorstep of mainland China': Joyce

Qantas CEO, Alan Joyce, said it was a “historic” agreement for the Jetstar brand in the region that would build a strong platform for accessing the "world’s largest, fastest growing and most profitable aviation market". Mr Joyce added: “We see tremendous potential for the Qantas Group in Asia and we’re looking forward to working more closely with China Eastern Airlines to deliver on it.” Qantas shares rose 2.9% on the opening of trade in Sydney on 26-Mar and ended the day up 2.0%.

But Jetstar Hong Kong has stopped short of delivering the knock-out blow that most airline groups in the region, including Qantas, are seeking: unfettered access to China’s massive domestic market. (Hong Kong is a ‘regional’ market and governed by a separate aviation access regime than Mainland China.)

However, if the Hong Kong experiment proves successful with China Eastern, Qantas will have the inside running. Not far behind Jetstar will be AirAsia and potentially other Asian LCC groups. China Eastern’s move will also be closely watched by China's three other main airline groups – China Southern, Air China and Hainan Airlines – as well as some of China's smaller carriers, in particular leading Chinese LCC Spring Airlines.

The establishment of Jetstar Japan could also force a move from Hong Kong market leader Cathay Pacific, which until now has insisted it has no need to follow most of Asia’s full-service airline groups in establishing budget brands. Cathay and its regional full-service subsidiary Dragonair now accounts for 49.7% of total capacity in the Hong Kong market. As LCCs, which now account for only 5.5% of total capacity in Hong Kong according to Innovata data, finally begin to penetrate the Hong Kong market the pressure will mount on Cathay to respond.

See related article: Cathay explains why it will not follow other Asian carriers in launching an LCC subsidiary or brand 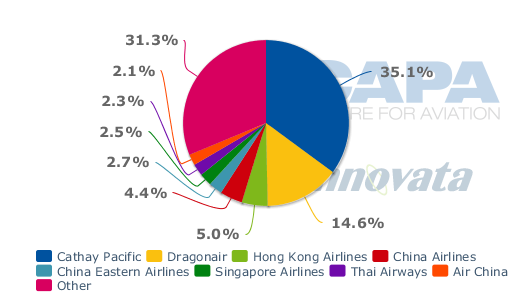 China Eastern now operates about 15 routes connecting Hong Kong with destinations in Mainland China. Jetstar Hong Kong will likely take over several of these routes from China Eastern. Capacity constraints at Hong Kong International Airport could limit real growth for the new joint venture but plans to expand capacity at Hong Kong, including through the construction of a third runway, should free up space for faster LCC growth at Jetstar Japan as well as other LCCs.

For now domestic LCC growth opportunities in China is limited but as LCCs from outside the mainland, including from Hong Kong, gradually expand their operations in China the pressure will mount for the market to open more domestically. If and when this occurs, Jetstar and China Eastern will likely be the first to benefit as they will already have a joint venture LCC up and running in Hong Kong.

China Eastern’s main two rivals, Air China and China Southern, will not be keen to cede potential first mover advantage to China Eastern and its new partner Jetstar. Both groups may now be persuaded to find its own LCC partner from outside China or launch a new LCC brand or subsidiary on its own. The implications for Air China are particularly significant as Air China has a 30% stake in Cathay Pacific.

However, gaining access domestically for any LCC will not come easily or quickly. Route rights within China remain tightly controlled and the expansion of domestic high-speed rail is cutting a swathe through many domestic air networks, forcing them to look to international markets for growth and profits. Beijing will be cautious in allowing further new entry – especially LCCs – that would threaten a delicately balanced market in which billions of state assets and investment are engaged.

Wherever Jetstar Hong Kong chooses to put its aircraft, it will find many rivals. The Hong Kong-Mainland China aviation market is highly competitive, with no fewer than 14 airlines present. 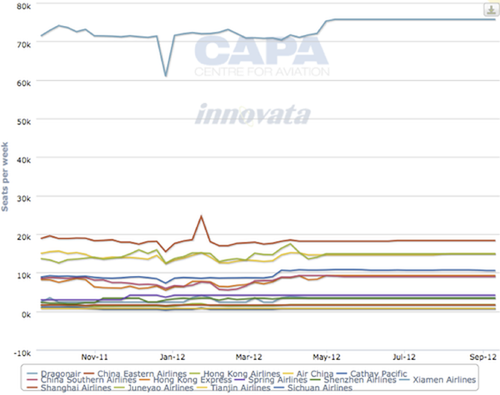 But there is now a limited amount of LCC competition in this market and fares tend to be relatively high between Hong Kong and mainland China. Spring and Juneyao Airlines are the only Chinese LCCs serving Hong Kong. Combined they account for less than 4% of total capacity in the Hong Kong-mainland China market.

This market has huge LCC potential given it is a short-haul market with pent-up demand that can easily be stimulated through lower fares. Hong Kong remains one of the leading destinations for tourists from Mainland China and as income levels in China continue to grow there is demand for more frequent leisure trips to Hong Kong.

Cathay Pacific subsidiary Dragonair currently holds a 46% share of Hong Kong-Mainland capacity (seats per week), while Cathay itself holds 6%, taking the group total to 52%. Add to that the 8.5% share held by Cathay’s cross-equity partner Air China and some six in 10 seats per week in the key Hong Kong-Mainland China market are controlled by this powerful combination. China Eastern now holds a 12% share while the remainder of the market is highly fragmented. 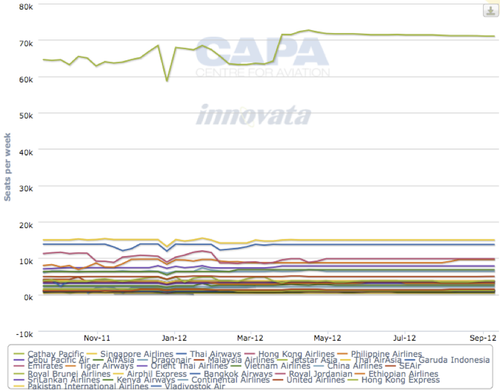 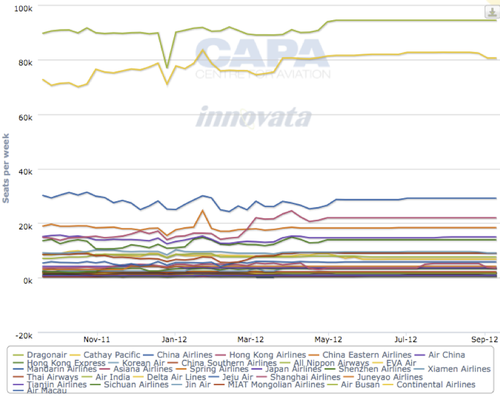 Jetstar Hong Kong to cut fares in Hong Kong by 50%

Jetstar Hong Kong will have to be extremely tightly focused on maintaining a low-cost base to be competitive. Selecting one of the region’s highest cost and congested airports, Hong Kong, for its main base raises some immediate questions. However, the Qantas Group would also be attracted to the city’s yield premium as one of Asia’s (and the world’s) leading business hubs.

Jetstar Group CEO, Bruce Buchanan, stated the new airline would trigger new travel demand with fares 50% less than existing full service carriers. Mr Buchanan said: “This is a unique opportunity for Jetstar to capitalise on the enormous potential of the Greater Chinese market, where the penetration rate of low cost carriers is less than 5%, using a model that we know delivers for customers and shareholders.”

For Cathay Pacific, which has long eschewed the low-cost model, Jetstar Hong Kong will be an unwelcome move by oneworld partner Qantas as Cathay seeks to rebuild profitability levels after a difficult 2011. Cathay is predicting even tougher times in 2012, and the prospect of a further intensification of short-haul competition and the attendant pressures on yields in 2013 would be of concern.

See related article: Cathay Pacific profit falls, but from a record level as it manages very well in a tough environment

The new joint venture between Jetstar and China Eastern could also raise questions about Cathay’s future in oneworld. Qantas will almost certainly look to codeshare with Jetstar Hong Kong and use the new joint venture to open up connections throughout mainland China. It is uncertain how Cathay, which was apparently opposed to a Qantas-supported proposal to bring Hainan into oneworld (a proposal which is now unlikely to advance further given Jetstar’s tie-up instead with SkyTeam member China Eastern), will respond. But the situation is clearly not ideal as both the Cathay-Air China and Qantas-China Eastern partnerships cross alliance lines.

The big winners will inevitably be travellers in the Hong Kong market. The cross-border JV model is opening Asia’s skies for expansion-minded airline groups like Qantas. But the pathways to profitability and meaningfully accessing key markets like China are not easy. Jetstar Hong Kong is a key stepping-stone in the process of evolution and is likely to trigger even more strategic activity in Greater China in the months to come.

Jetstar Hong Kong is underpinned by a total maximum capitalisation of up to USD198 million. The shareholding percentage in Jetstar Hong Kong will be equally held by China Eastern Airlines and Qantas Group, which will be equal partners in the joint venture. The maximum exposure for each partner is USD99 million over a three-year period.