After quietly allowing its rivals to grab headlines in 2012 with the unveiling of new subsidiaries, Canada’s Porter Airlines has followed through on plans to declare its long-term strategy, boldly proclaiming its ambitions to become a strong third force in Canada’s aviation market. Underpinning Porter’s efforts are the carrier’s plans to introduce Bombardier CSeries CS100 narrowbodies in a drive to broaden its reach to markets beyond the eastern half of Canada and the US.

Porter’s evolution follows hints dropped by the carrier in recent weeks that it would table its long-term vision going forward after Air Canada and WestJet dominated Canadian aviation discourse in 2012 by unveiling plans to create their respective subsidiaries Rouge and Encore. Porter now envisions the 107-seat narrowbody aircraft joining its existing fleet of Bombardier Q400 turboprops to allow for expansion into western Canada, and new transborder markets on the US west coast and Florida.

While Porter believes now is the time to forge a new era in its business, the reality is its growth could disrupt a market place that is just showing signs of stability. Air Canada and WestJet have displayed prudent capacity restraint that has allowed WestJet to maintain its consistent profitability and Air Canada to record positive results in 2012 after recording losses in 2011, 2009 and 2008. During 2012 Air Canada grew capacity by just 1.2% while WestJet recorded 4% capacity growth versus nearly 9% for the year prior.

The capacity introduced by Porter with larger aircraft into already well-served markets could prove disruptive, pressuring yields for all airlines serving those routes. Porter’s bold expansion also hinges on gaining approval for jet operations at its Toronto City Centre base, which will likely stir up an unruly political debate that could completely derail the carrier’s planned business evolution.

Since its launch in 2006 Porter has introduced service to 19 markets and built up a fleet of 26 70-seat Q400 turboprops. Despite the controversy it stirred by securing a commanding status at Toronto’s Billy Bishop Airport (Toronto City Centre), Porter still only accounts for about 4% of the Canadian aviation industry based on seat share. 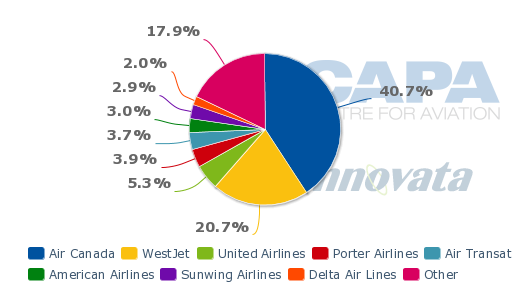 But replicating its niche on a larger scale to markets not currently within the range of its Q400s (1,014nm for the Q400 vs 2,950nm for the CS100) could prove to be challenging for Porter. The carrier has identified nine transborder markets and four routes in western Canada as targets for the new 12 CS100 aircraft which are scheduled for delivery beginning in 2016. 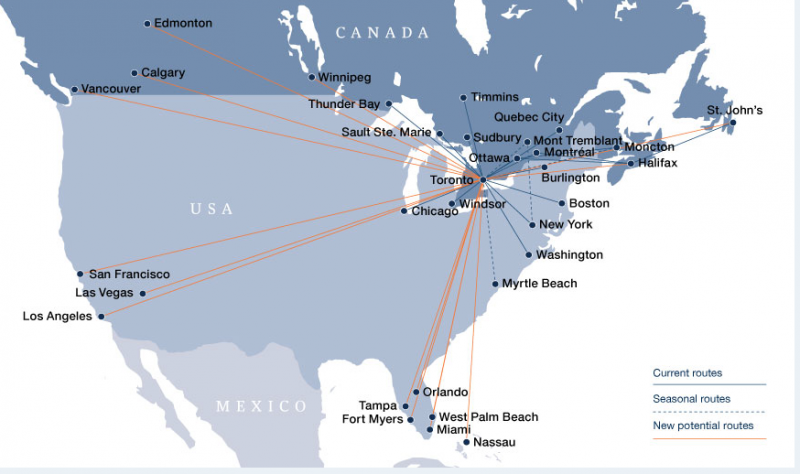 Of those markets only two – West Palm Beach and San Francisco – have a single carrier offering flights from Toronto Pearson Airport, Air Canada. The remaining 11 markets are amply served by Air Canada, WestJet and in some cases tour operator Sunwing and US major carrier American, pitting Porter against full-service airlines and tourist operators alike.

While Porter will not introduce a huge amount of capacity on those routes as it will take time to ramp up the CS100 jet operations, its foray into those markets could be disruptive enough to pressure profitability of other airlines.

Its introduction of flights into western Canada could produce a similar result for carriers operating in Canada’s eastern triangle (Toronto-Montreal-Ottawa). After WestJet bolstered its frequencies in those markets last year, Air Canada cited pressure on its yields in those markets, and in some transborder markets where its competitors had expanded. WestJet also launched flights from Toronto to New York LaGuardia, competing with Air Canada and American Airlines on the pairing. Porter also serves the New York area from Toronto City Centre with service to Newark.

Assessing the competitive pressure in the transborder markets, Air Canada CEO Calin Rovinescu recently remarked that while it is a natural tendency for new entrants in markets to introduce discounted fares, he did not predict any immediate change in competitive behaviour in those markets.

If Porter succeeds in executing its planned expansion, the same competitive dynamics could be introduced in the carrier’s targeted markets in western Canada, Florida and the US west coast. Both Air Canada and WestJet serve the four western Canadian markets Porter is targeting and a majority of the transborder markets earmarked for the carrier’s expansion. Porter will disrupt pricing in those markets with introductory fares and dilute continued pricing power by existing carriers by potentially introducing unnecessary supply on those routes.

Porter’s planned expansion will no doubt pressure both of Canada’s largest carriers as it attempts to improve its stature in the Canadian market place. But WestJet could feel the most pressure as Porter and WestJet could be chasing the same passenger base – corporate travellers not currently wedded to Air Canada.

Previously WestJet CEO Gregg Saretsky has remarked the carrier only has about 10% of the managed corporate share in Canada, which represents a significant opportunity for the carrier to chase more business travellers that produce higher yields.

But with Porter potentially looking to expand its corporate base through the acquisition of larger, longer-range jets, WestJet’s opportunities to expand its reach into the business travel market could shrink as Porter will compete aggressively for passengers who are not deeply entrenched in Air Canada’s loyalty programme.

The added capacity could also force Air Canada, Porter and WestJet into lowering their fares to stay competitive in the space. The result could be a reversal of a trend recently cited by the Conference Board of Canada during the last couple of years when Canadian airlines enjoyed an ability to raise fares above inflation following a decade of little or no growth in ticket prices.

All of Porter’s much-hyped expansion plans hinge on gaining approval from the requisite authorities to operate jets from Toronto City Centre and the endorsement for adding 168m at each end of the airport’s main runway. Porter needs the green light to modify the so-called tripartite agreement amongst the city, the federal government and the Toronto Port Authority that bans jet operations at the airport, which sits on a small island close to Toronto’s city centre.

Porter’s declarations to operate jets from the airport will no doubt fuel heated discussions as some residents will strongly oppose the introduction of larger aircraft from the site even as Porter touts the CS100 as a whisper jet. Porter is obviously hoping the facts that the CS100 is quieter than the Q400 and that its order would boost Bombardier’s new flagship programme will it help it secure the necessary political backing and overcome the looming controversy.

To underscore the seriousness it places on gaining approval to operate large jets from Toronto City Centre Porter, during its media blitz to announce its expansion plans, put its board chairman Don Carty – a native Canadian, former head of American and also chairman of Virgin America’s board of directors – front and centre to discuss the modifications necessary at the airport (including additional takeoff and landing slots) to accommodate the new routes and aircraft. Mr Carty told Canadian newspaper The National Post that he was encouraged by preliminary discussions with the tripartite members about Porter’s desire to extend the runway and operate jets from the airport, and indicated that the parties might issue their approval within six months.

But the decision might not be made that easily as both Air Canada and WestJet have both made rumblings about operating larger aircraft from the airport if Porter gets the green light for additional service. Air Canada was entrenched in a legal battle for years before it finally returned to the airport in May-2011 with its own Q400 flights operated by partner SkyService Airlines. The carrier will no doubt set its sights on operating larger aircraft from the airport, and potentially use legal means to block Porter’s expansion if it fails to gain the same access as Porter.

Behind the hype surrounding Porter’s unveiling of its declaration to build up its business to challenge Air Canada and WestJet, is the reality that various elements need to fall into place before its ambitions become a reality – namely convincing regulators and local and federal governments that its expansion is necessary to ensure adequate competition is present in the Canadian market place. If that occurs Porter also needs the commercial wherewithal to face fierce competitors that will fight intently to keep their customer bases intact. The result could be favourable for travellers as fares will fall, but the fragile financial health of Canada’s airlines could be jeopardised if demand fails to keep pace with Porter’s planned expansion.