Porter Airlines seems to be instituting a slight strategy shift as its main rivals Air Canada and WestJet turn their attention to the respective launches of their new subsidiaries. While Porter appears largely protected from direct competitive threats from either enterprise, the carrier has recorded dwindling load factors, perhaps an effort to trade loads for yields.

The shift follows increasing competitive pressure in some of Porter’s busier business markets in Canada’s eastern triangle (Toronto-Montreal-Ottawa) after WestJet during 2012 bolstered its frequencies on those routes along with introducing new transborder service from Toronto to New York LaGuardia. Air Canada has repeatedly stated its unit revenues have come under pressure in those markets as competitors increased capacity in those regions.

From its base at Toronto City Centre Porter serves the busy US northeastern transborder markets of Boston, New York (Newark) and Washington (Dulles). The carrier also operates its 70-seat Q400 turboprops to Chicago Midway. 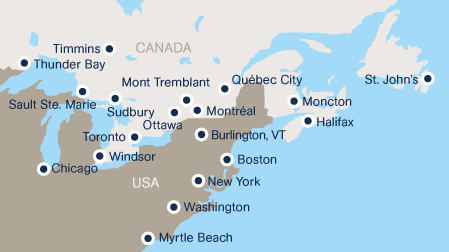 After claiming that it achieved its first year of profitability during 2011, Porter opted to remain in the shadows during 2012 while WestJet trumpeted the creation of its new domestic regional subsidiary Encore and Air Canada revealed plans to develop a new low-cost subsidiary Rouge to target leisure markets travelling to Europe and the Caribbean. Porter only launched two new routes during 2012 – Timmins, Ontario and Washington Dulles.

Porter remains a small niche player in the Canadian aviation industry despite controversy surrounding its 2007 launch from Billy Bishop Toronto City Airport (Toronto City Centre). Air Canada spent nearly four years mounting legal challenges to regain access to the close-in airport after Porter revealed City Centre as its base and finally launched Q400 service from the airport in May-2011, operated by a new regional partner Skyservice in an effort to retain the higher-yielding business travellers that Porter targets. Porter offers its customers an updated terminal at City Centre with business amenities and an in-flight experience that features leather seats with 34-in pitch and complimentary meals with a choice of beer or wine. Porter operates with a tagline of bringing sophistication back to short-haul air travel, and with its more attractive base closer to downtown Toronto, Air Canada became spooked that it would lose some of its important high-yielding passengers to Porter.

During its time in operation Porter has purposefully remained small in scale. Although its niche operation mainly focuses on business passengers travelling on short-haul flights it has balanced out its network with some seasonal leisure destinations including Myrtle Beach, South Carolina and Burlington, Vermont. Even as Porter has caused a stir at Canada’s largest carrier Air Canada, Porter presently only represents about 6% of the domestic seats on offer in Canada, and about 4% of system-wide seats on offer to and from Canada. 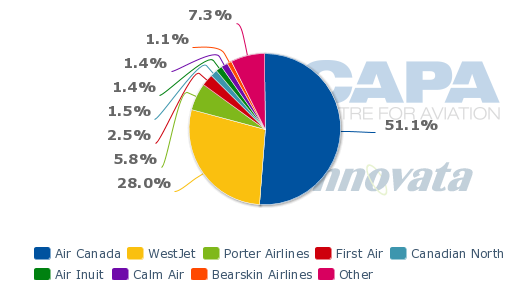 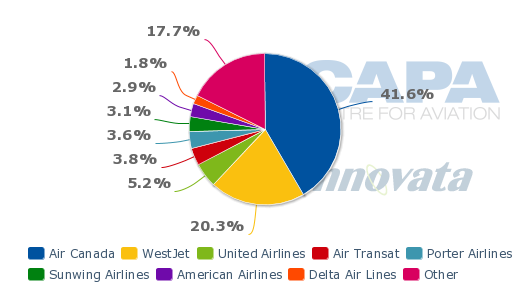 Porter’s 4% seat share in the Canada-US transborder market it also dwarfed by a combined 47% share held by Star partners Air Canada and United (Air Canada alone accounts for a 30% share while United represents 17% of the seats on offer), a 17% share held by WestJet and American’s 9% share. 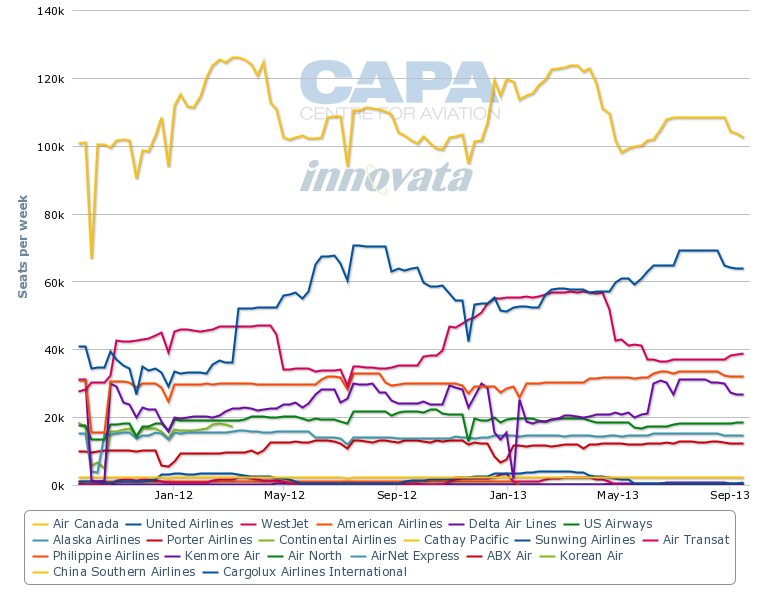 Shifting management of traffic and loads to bolster yields

Even as its remains small in scale compared with its much larger Canadian rivals Air Canada and WestJet, Porter during the last three years has recorded solid traffic growth, posting a 55% rise in traffic between 2010 and 2012 and a 14% increase from 2011 to 2012. Its load factors during the last couple of years have remained steady at roughly 62%. 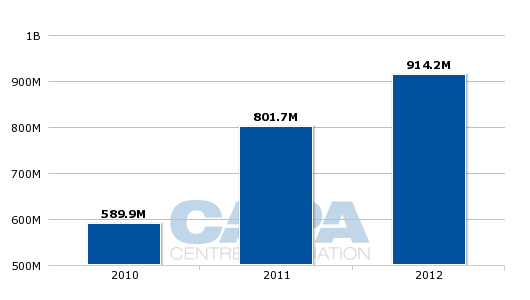 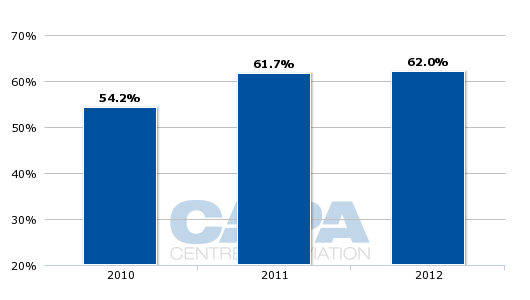 But during late 2012 privately owned Porter appeared to be instituting slight changes in its management of traffic and load factors as its traffic for the first two months of 2013 declined nearly 4% and load dropped 2.1ppts on essentially flat capacity.

Porter CEO Bob Deluce recently told Canadian newspaper The Financial Post the airline’s fall in traffic was a result of Porter instituting changes in pricing, and assured the new scheme was working as yields were improving. There is still intense competition in the eastern triangle markets and on US transborder business routes from Toronto, so it is likely Porter is attempting to gain pricing traction in less contested markets, or all carriers are enjoying a lift in fares that capacity discipline has allowed.

Porter could also be benefitting from a general trend of improved pricing enjoyed by Canadian airlines during the last couple of years. In a recent assessment of the airline business in Canada, the Conference Board of Canada determined that slower capacity growth in the industry resulted in the country’s airlines during 2012 raising their ticket prices above inflation, the second consecutive year those companies enjoyed improved pricing. The improvements follow roughly a decade of little or no growth in prices, the Board concluded.

After remaining relatively quiet about its future business plans during 2012, Mr Deluce told The Financial Post that Porter in the not too distant future intends to reveal plans about its intentions during the next two-to-three years with respect to growth, new aircraft and destinations. He remarked Porter’s next phase of growth could include a potential aircraft order, another attempt at an initial public offering and expansion into western Canada.

With WestJet’s initial plans to operate Encore from its headquarters in Calgary and from Vancouver, Porter is likely shielded from encroachment from Encore during the first year of its operations. The first routes introduced by Encore are contained to western Canada and include Fort St John, Nanaimo and Victoria.

But WestJet has plans to base at least a portion of Encore’s Q400s (it has 20 of the turboprops on order and will take delivery of seven in 2013) in Toronto, which will add more competition in Porter’s base markets, which are already well-served by Air Canada, and in many cases Air Canada and WestJet. Air Canada operates from Toronto Pearson to all of Porter’s markets with the exception of Burlington, Mont Tremblant and Myrtle Beach, and from Toronto City Centre uses Q400s on flights to Montreal. In addition to Air Canada, WestJet also operates flights from Montreal to Thunder Bay, Ottawa, Montreal, Quebec, Halifax and St John’s and plans to launch seasonal flights to Myrtle Beach in May-2013. Porter also competes with Air Canada and WestJet on service from Halifax to Ottawa and St John’s.

In tandem with the development of Encore, WestJet has been creating products geared toward the business traveller, and plans to introduce fare bundles in the near future that appeal to all, from the most cost-conscious traveller to the high-end business customer who requires maximum flexibility. One of the element’s of Encore’s design is to use the Q400s for additional frequencies in some of WestJet’s markets, so it is likely Porter will see added capacity on some of its busiest routes in the not too distant future, which will create pricing pressure for all carriers serving those markets. During most of its earnings discussions during 2012, Air Canada singled out the continued weakness of eastern triangle and US transborder markets in the US northeast. WestJet’s potential deeper penetration into those markets with Encore will do little to improve the profitability of those markets.

Porter also faces heightened competition from WestJet and Air Canada if Mr Deluce’s hints of westward expansion come to fruition. Porter and WestJet would be competing for the same type of short-haul passengers in the region, with WestJet having the added advantage of enjoying more brand recognition as it is the largest carrier in Vancouver in terms of seats on offer, and has its headquarters and second largest base in Calgary. There are also no apparent regions in western Canada that offer the same benefits Porter enjoys in Toronto – holding a significant majority of the capacity at a close-in airport that appeals to business travellers. 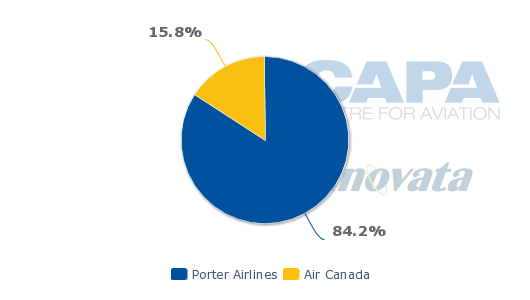 As WestJet spreads its wings into the regional space and continues to assert a more distinct presence among business travellers, competition with Porter will intensify as those two carriers vie to capture customers from Air Canada, who despite its problems during the last couple of years has a broader network and stronger frequent flyer programme. During its six year existence Porter has held its own against its rivals by leveraging its unique position in Toronto, but as WestJet steps up its push into the business traveller segment, Porter may have to forge a new strategy in order to retain and attract its customer base.