PAL is keen to offer a standard product across its long-haul operation, which currently consists of one destination in Europe and five in North America. Los Angeles and San Francisco could transition to an all-777-300ER operation by the end of 2016, while A350s could be used to introduce non-stops to New York, which was launched in Mar-2015 with service via Vancouver.

PAL is also planning to standardise its A330-300 fleet by retrofitting the eight aircraft which currently are in all-economy configuration. PAL may sublease two of its 15 A330-300s but growth of the medium-haul network could still be pursued using A321neos.

The 777-300ERs were acquired under the original fleet plan by the Lucio Tan Group, which sold a controlling stake to San Miguel in early 2012 but reacquired the stake in 2014. PAL initially placed an order with Boeing in 2007 for two 777-300ERs and two options and at the same time agreed to lease two of the type from GECAS. The two options were subsequently exercised.

The A340-300s are ex-Iberia aircraft that are leased from Airbus and are currently between 13 and 16 years old, according to the CAPA Fleet Database. They are in 254-seat two-class configuration including 36 recliner seats in business and 218 seats in economy. 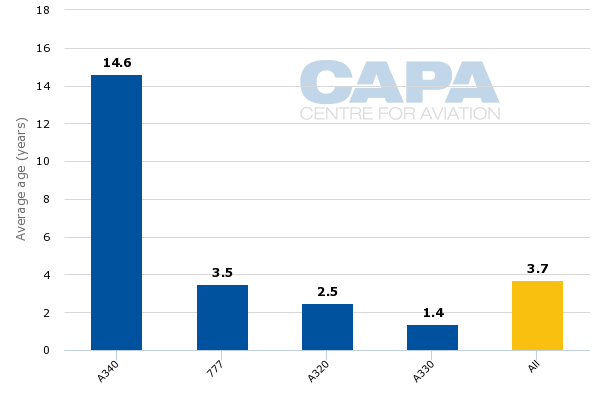 PAL currently has a mismatch of products on long-haul routes

PAL uses its A330-300s on medium-haul routes within Asia as well as to Australia, Hawaii and the Middle East. The single-class A330s are generally used on select Middle East routes.

PAL began using 777-300ERs to Los Angeles and San Francisco in May-2014. While the 777s were initially acquired for the US market, PAL was previously unable to change gauge on existing US flights or launch new US flights because of Category 2 restrictions.

PAL president Jaime Bautista told CAPA at the 8-Jun-2015 IATA annual general meeting in Miami that the carrier recently committed to leasing two additional new 777-300ERs for delivery in 2016. The additional aircraft will be delivered in the same 370-seat configuration as the existing six 777-300ERs.

Providing a uniform product in the California market would be logical and could help boost sales. Los Angeles and San Francisco are PAL’s two largest international markets. While Manila-San Francisco has slightly less ASKs than Manila-Vancouver a large portion of the Vancouver capacity is allocated to New York and Toronto while all the San Francisco capacity is for the local San Francisco market. 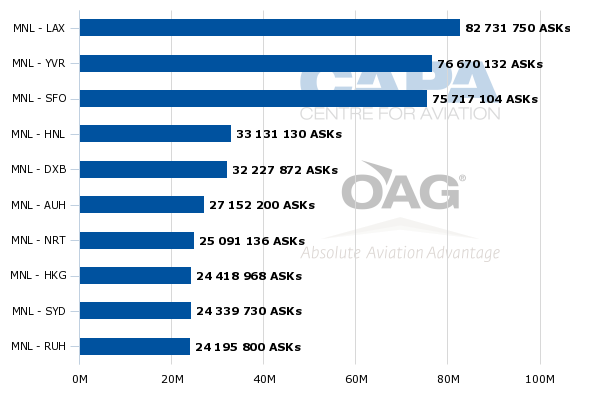 The 777-300ER offers a far better and newer product than the A340 in both cabins. The A340 only has overhead in-flight entertainment monitors in economy. Individual monitors are provided upfront but the business cabin has old recliner style seats and lacks power outlets.

If Los Angeles and San Francisco are upgraded to an all-777 product, Manila-London and Manila-Vancouver-New York will be left as the only remaining A340 routes. The other Vancouver flights, which include three turnaround flights and four which continue onto Toronto, are already operated with 777-300ERs.

While the use of the A340 on the recently launched Manila-Vancouver-New York route creates a mismatch of products in the Vancouver market this is more manageable than the mismatch in the California market because a majority of Manila-Vancouver passengers continue onto New York. PAL has fifth freedom rights to pick up local passengers between Vancouver and New York but has experienced strong local demand on Manila-New York.

PAL is still in the process of finalising a new widebody fleet plan but most likely the new plan will see the A340s being phased out entirely in 2018. PAL has been evaluating the 787-9 and A350-900 as potential replacements for its last four A340s.

Mr Bautista told CAPA that PAL is looking to acquire at least four and as many as six new-generation widebody aircraft for delivery in 2017 and 2018. Six aircraft would give PAL an opportunity to expand its network in North America and Europe and/or operate additional frequencies to its six existing long-haul destinations. PAL is particularly keen to upgrade its London service to daily.

As CAPA previously outlined, PAL has been able to improve its performance on the London-Manila route since moving to a later arrival and departure slot at Heathrow in Mar-2015. The new timings improve connections on the Manila end as previously the flight departed Manila too early to facilitate connections. PAL is now looking for more evening slots at Heathrow to accommodate a daily service.

London and New York could potentially be served with new-generation widebody aircraft. The A350-900 has emerged as the strong favourite as Airbus has informed PAL that it could use the type to operate non-stop services to New York. PAL was able to get a close look at the A350-900 in May-2015, when Airbus had a demonstration flight in Manila, and will have further discussions with Airbus during the Paris Air Show, which starts on 15-Jun-2015.

PAL is eager to provide a non-stop product for the New York market. PAL does not believe any variants of the 787 or its existing fleet of 777-300ERs have the range to operate this route without payload restrictions. PAL also does not want to wait for the 777-8X, a new ultra long-range aircraft that would be able to operate Manila-New York but is not slated to enter service until around 2020.

While PAL is eager to serve New York non-stop it plans to continue to serve Toronto on a one-stop basis. PAL briefly operated from Manila to Toronto non-stop with 777-300ERs after launching services to Toronto in late 2012 while stopping in Vancouver on the return sector. A lack of demand rather than operating issues prompted PAL to end the eastbound non-stops in favour of one-stops in both directions.

Canada is currently PAL’s third largest international market after the US and Japan based on ASKs. 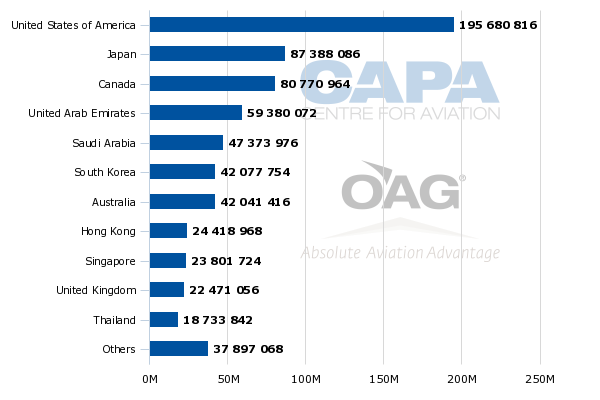 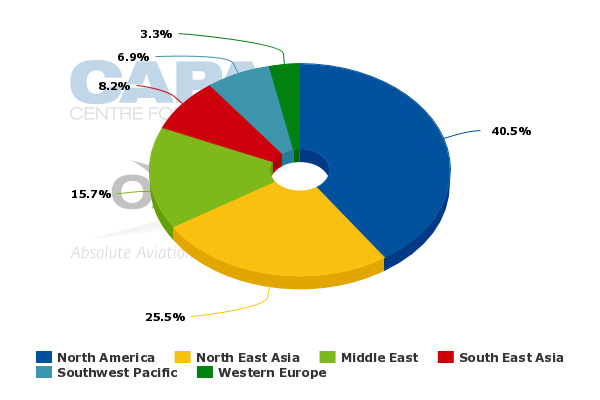 PAL plans adjustments to its under-utilised A330 fleet

PAL aims to eventually pursue expansion of its long-haul operation using a larger and more efficient long-haul fleet. For the short to medium term PAL will be limited to regional and medium-haul international expansion using its A320 family and A330 fleets.

PAL is not considering any expansion or renewal of its A330 fleet as part of its current fleet review. PAL instead is looking at reconfigurations and a possible slight reduction of its A330 fleet to better match supply with demand on medium-haul routes.

The Lucio Tan Group initially determined after taking back control of PAL that the carrier had about seven too many A330s. But the number of excess aircraft has reduced to a more manageable two as PAL decided to use the A330 to replace the A340 on the Honolulu, Melbourne and Sydney routes.

The new fleet plan however envisions reconfiguring the eight all-economy aircraft within the next few years, or six if two aircraft are subleased. PAL is considering new 311-seat and 329-seat configurations for its 414-seat A330-300s.

This would provide a new less dense option, resulting in capacity reductions on some routes. The seven PAL aircraft which already have business class will stay in the current 375-seat configuration.

The reconfigured A330s will enable PAL to again offer a premium product across all its medium-haul routes. This should enable PAL to better differentiate its product compared to rival Cebu Pacific, which operates six A330s in single-class configuration. Cebu’s new long-haul division and PAL currently compete on several routes to Australia and the Middle East.

San Miguel’s decision to pursue a dense all-economy configuration for eight A330s was seen as a response to Cebu’s early 2012 decision to establish a medium/long-haul unit. Lucio Tan is now keen to reverse the San Miguel decision and focus on providing a higher end product, rather than simply following Cebu Pacific.

This is a sensible approach given Cebu’s lower cost structure and the fact there is some premium demand on all the routes PAL serves with A330s. PAL particularly points to its success in the Dammam market, where it has added capacity while Cebu Pacific has withdrawn.

The A321neos provide significantly improved range over the A321ceo, opening up new medium-haul routes. Mr Bautista said PAL is also considering converting some of its A321neo orders to the A321neoLR, a newly launched long-haul version that is capable of flying on routes of up to eight hours.

PAL is considering outfitting A321neoLRs with lie-flat business class seats and operating the aircraft to Australia. Launching non-stop flights to Brisbane, which is now served via Darwin, is a likely route for the A321neoLR. PAL also believes using the new type for Melbourne and Sydney would be a possibility.

PAL launched Manila-Darwin-Brisbane and Manila-Darwin-Perth services in 2013. Perth quickly proved to be unviable and was dropped. Brisbane has been a stronger market than Darwin but PAL does not currently have a suitable aircraft to operate Brisbane non-stop.

PAL is also using the A320ceo to launch on 1-Dec-2015 four weekly flights to Auckland via Cairns. But Auckland would not be within range of the A321neoLR.

PAL’s A320s are currently configured with 156 seats including 12 in business and 144 in economy. The PAL Group also has A320s in single-class configuration but these are all operated by sister carrier PAL Express.

PAL’s newer A321s are configured with 199 seats including 12 in business, 18 in premium economy and 169 in economy. As is the case with the A330s, PAL’s premium economy product on the A321 features the same seat as regular economy but extra legroom.

There are no A321s at PAL Express, which currently operates only A320s and Bombardier Dash 8 turboprops. PAL Express operated two of the single-class A330s until late Mar-2015, when it handed its only long-haul route, Manila-Dubai, to PAL mainline.

PAL also sold two A320ceos in 1H2015, resulting in a net gain of three narrowbody aircraft (as five A321ceos were delivered). PAL is not planning any aircraft deliveries or retirements in 2H2015.

In 2016 it plans to return two A320s while taking five A321neos, again resulting in relatively modest net growth of three narrowbody aircraft. As discussed earlier in this report, PAL plans to take two 777-300ERs in 2016 but will retire two A340-300s.

The new fleet plan gives PAL an opportunity to take a breather after rapid fleet and capacity growth in 2013 and 2014. The Lucio Tan Group seems to be taking a more disciplined approach to capacity which should enable PAL as well as its two local competitors, Cebu Pacific and Philippines AirAsia, to continue to improve profitability. PAL posted an annual profit in 2014 for the first time in four years and was again in the black in 1Q2015.

North America has traditionally been PAL’s largest and most profitable market. But PAL will eventually face competition in this key market against Cebu Pacific, which is now looking at acquiring A350s to serve the west coast of North America. Quickly acquiring more 777-300ERs and locking in early A350 delivery slots should improve PAL’s long-term position in the Philippine long-haul market as competition intensifies.

A further encouraging sign is that PAL is not being overly aggressive and is looking to acquire only a modest number of new long-haul aircraft. This is a refreshing change after the overly ambitious buying spree from San Miguel in 2012.

A long-haul fleet of 14 aircraft should easily be sustainable, even with increased competition, as the Philippines is now seeing healthy demand and economic growth.