This is the fourth part of a series of articles on the 2013 outlook for Philippine carriers. The third part, published on 3-Apr-2013, analysed the bleak outlook in the domestic market for the Philippine Airline (PAL) Group following its decision to exit the budget sector by transitioning PAL Express, formerly known as AirPhil, from low-cost to full-service regional carrier. This part looks at the international outlook for PAL, which has improved since a determination from ICAO in Mar-2013 that the Philippine authorities are now in compliance with its safety standards.

The PAL Group is increasing its focus on the international market following its decision to exit the budget end of the market, which dominates domestic travel in the Philippines as the local population is extremely price conscious. The group’s share of seat capacity in the Philippine domestic market is currently about 33%, compared to 43% in Apr-2012. PAL’s new management team, which was installed after San Miguel acquired a majority stake in PAL and sister carrier AirPhil one year ago, is banking on growth in the international market to offset domestic declines.

PAL is also banking on improved profitability of its international operation to lead the way back into the black. The carrier reported an 80% increase in its net loss during its most recent quarter, the three months ending 31-Dec-2012, to PHP2.62 billion (USD64 million). Its loss for the nine months ending 31-Dec-2012 was PHP2.74 billion (USD67 million). Passenger revenues for the nine months were up by only 2% as traffic declined. For the calendar year 2012, PAL’s international passenger traffic increased by only 1% to just under four million while domestic passenger traffic dropped by 5% to 4.1 million.

PAL to carry more international than domestic passengers in 2013 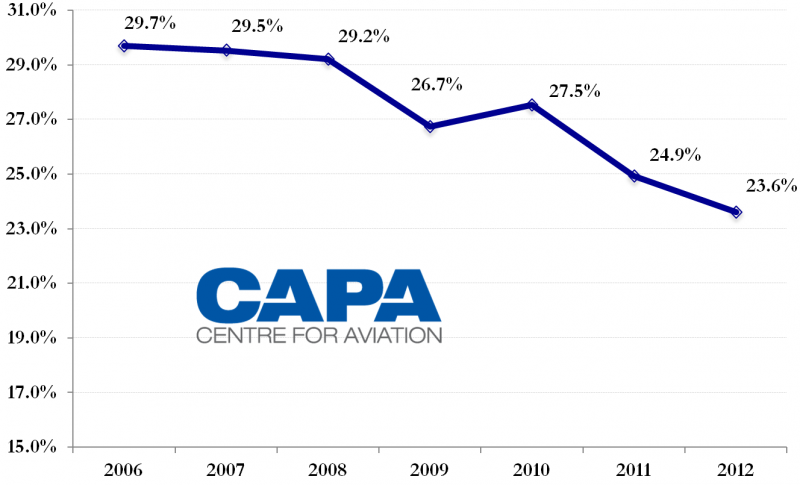 Back in 2006 PAL captured nearly 30% of the Philippine international market while Cebu Pacific captured only 2%. In 2012, Cebu’s share was 16.3%, putting it 7.3ppts behind PAL. Cebu Pacific, which overtook PAL as the largest domestic carrier in 2007, will continue to close the gap with PAL as is adds regional international services and launches a long-haul unit with an initial focus on routes to the Middle East and Australia. 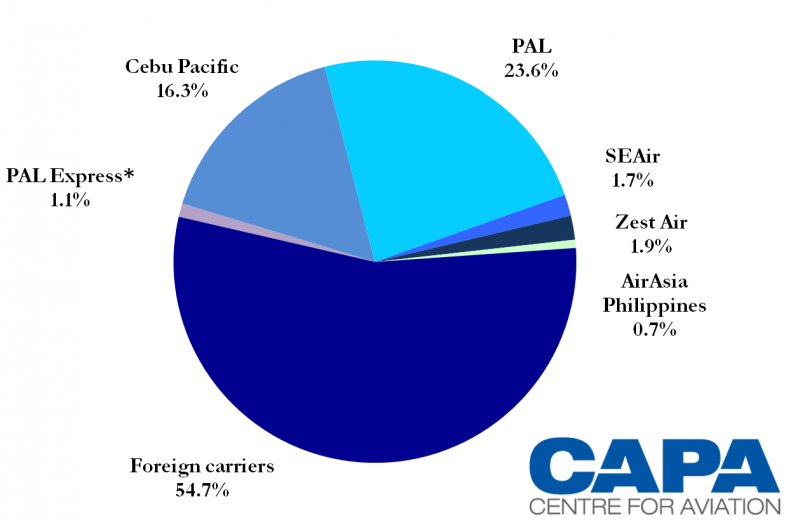 Cebu Pacific is already larger than PAL on international services within Southeast Asia. Cebu Pacific currently has a 28% share of seat capacity in the Philippines-Southeast Asia international market compared to 23% for the PAL Group, according to CAPA and Innovata data. Singapore Airlines (SIA) is even able to match PAL’s 23% share when factoring in capacity from regional subsidiary SilkAir and SIA sister airline group Tiger Airways (which includes Philippine affiliate SEAir). 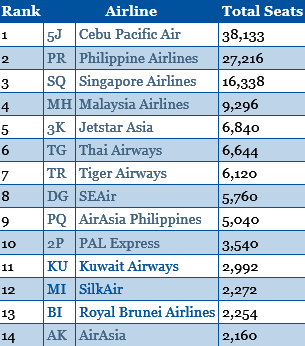 With LCCs now accounting for over 50% of capacity within Southeast Asia, the PAL Group will struggle to grow in this market without a budget subsidiary.

North Asia is now a bigger and more profitable market for PAL. North Asia accounts for 56% of the carrier’s international seats compared to only 25% for Southeast Asia.

But PAL has benefitted in North Asia from restrictions on LCC growth. Some of these restrictions will be removed in 2013, leading to more intense competition for PAL in the South Korea and Japan markets. 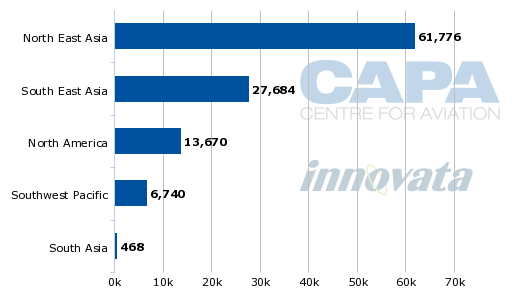 The PAL Group currently accounts for a leading 26% of capacity in the Philippine-North Asia market (includes a 1% share from PAL Express). Cebu Pacific has a 15% share while three smaller Philippine LCCs – Zest, AirAsia Philippines and Tiger affiliate SEAir – have a combined 10% share. 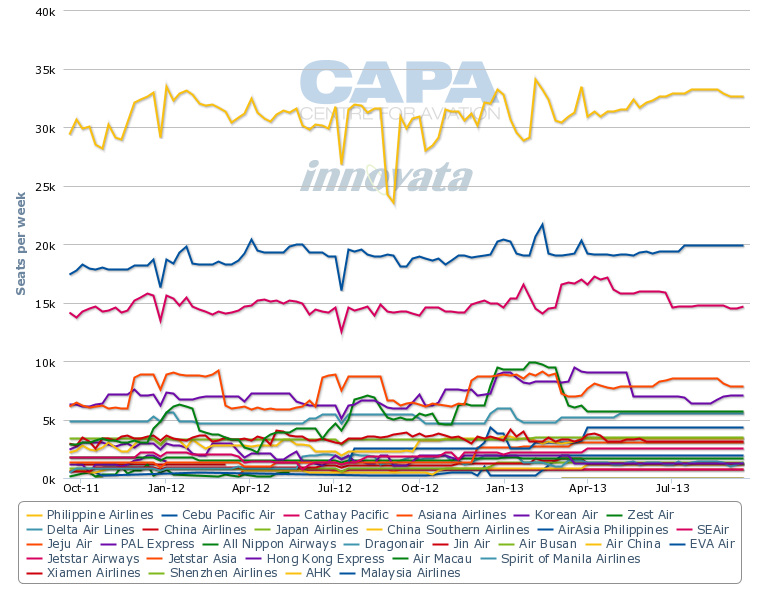 Hong Kong and South Korea are the two largest international destinations from the Philippines based on current seat capacity. The Philippines-Hong Kong market is slightly larger with nearly 40,000 weekly seats.

PAL’s lead over other Philippine carriers in this market is guaranteed for now because the Hong Kong-Philippines bilateral prevents Cebu Pacific and other Philippine LCCs from expanding. For example, Cebu Pacific is unable to use its new A330 fleet on the Hong Kong route unless it swaps two A320 frequencies for an A330 flight, which it does not want to do as it wants to preserve its current schedule and slots at Hong Kong. (Cebu Pacific will instead use its first two A330s, which will be delivered in 2Q2013 and 3Q2013, to Singapore and Seoul as well as new medium-haul flights to the Middle East). But eventually the Philippine-Hong Kong bilateral will likely be extended, leading to increased LCC competition for PAL.

There are no bilateral-related restrictions on expansion to mainland China. But demand has been limited due to political tensions between China and the Philippines. Once relations improve, the market is expected to grow significantly, driven by inbound tourist demand.

LCCs are once again better positioned to tap into the expected growth given that most of China is within narrowbody range of the Philippines and the fact this market is price sensitive. PAL currently has a leading 33% share of capacity in the Philippines-China market while Cebu Pacific has a 22% share and Zest 11%.

South Korean authorities in recent years have blocked new Philippine carriers from launching services to the country. Japanese authorities have a similar ban as well as a restriction preventing Philippine carriers already serving Japan from expanding. But both countries are expected to soon remove these restrictions following the recent positive determination from ICAO, which followed an audit that was conducted in Feb-2013.

While PAL will be free to add capacity to Japan, its total share of the market will likely decrease as Philippine LCCs rapidly expand. Cebu Pacific has been limited to three weekly flights to Osaka and has indicated it will significantly add capacity to Japan as soon as the restrictions are eased.

The recent ICAO determination should also lead to the removal of the Philippines from the EU blacklist. PAL is looking at re-launching flights to Europe with London the most likely initial destination, followed by Paris and Rome.

There are currently no non-stop services between the Philippines and Europe. But competition in the Philippines-Europe market is intense, with Gulf carriers and other Asian carriers offering a large range of one-stop destinations throughout Europe. 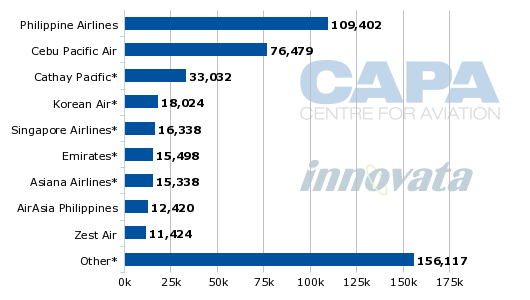 PAL will struggle and likely face an initial period of losses after it re-enters the European market, which could occur as early as 2H2013 assuming Philippine authorities are successful at convincing EU authorities to remove the Philippines from the blacklist when they meet in Brussels in a few weeks. PAL will need to re-establish its brand in Europe to attract inbound tourists. Winning over Filipinos working in Europe will be easier but they are spread out over several countries and PAL will need to under-cut aggressive Gulf carriers.

PAL is most looking forward to the opportunity to expand in the US, where it has been unable to grow for several years due to the Philippines coming under FAA Category 2 restrictions. Under Category 2, PAL also has been unable to deploy its new fleet of 777-300ERs on existing US routes, forcing it to continue to use inefficient 747-400s and A340s.

PAL president and San Miguel chief Ramon Ang has stated that he expects PAL will be able to narrow its losses in 2013 by about 50% by replacing 747s with 777s, reducing fuel and maintenance expenses. But PAL cannot phase out its five remaining 747s, which are used on flights to Los Angeles and San Francisco, until Philippine authorities secure a Category 1 rating from the FAA.

PAL needs to be patient as it could take several months before it gets the green light to change gauge and pursue expansion in the US market. Philippine authorities have asked the US FAA to conduct a new audit, which it will likely pass given the recent ICAO determination, but will take a few months before the audit can take place and a few more months for the results to be tallied.

The timing is crucial as PAL is slated to take the last two of its 777-300ERs in 2013. These aircraft as well as some of its original four 777-300ERs, are intended for the US market. In addition to using the 777-300ER on the Los Angeles and San Francisco routes, PAL is looking at using the type to launch services to New York and potentially a third destination on the US west coast such as San Diego. PAL is now using its 777-300ERs to Melbourne, Sydney and Tokyo – routes which are better served with A330-300s – in addition to its Manila-Vancouver-Toronto route.

PAL also serves the US islands of Guam and Hawaii with A340s and A320s respectively. But these markets will see an increase in competition as Cebu Pacific plans to enter the Manila-Guam market once Category 2 restrictions are lifted. Cebu Pacific may also consider Hawaii with its new fleet of A330s.

PAL, following the ownership change in 2012, ordered 20 additional A330-300s, which will be used to expand regional international services and replace older A330s. The carrier is now looking to acquire additional long-range twin aisle aircraft which will be used to further grow its long-haul network along with its six 777-300ERs. PAL also committed in 2012 to renewing its narrowbody fleet, which is used domestically and on regional international services, by placing orders for 44 additional A320 family aircraft. 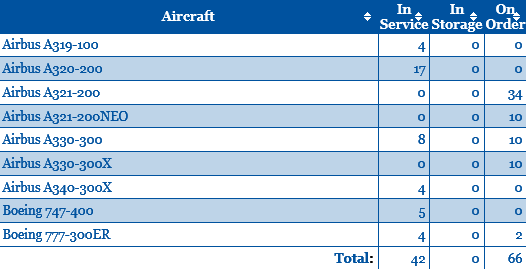 Philippine Airlines projected delivery dates for aircraft on order*: as of 1-Apr-2013 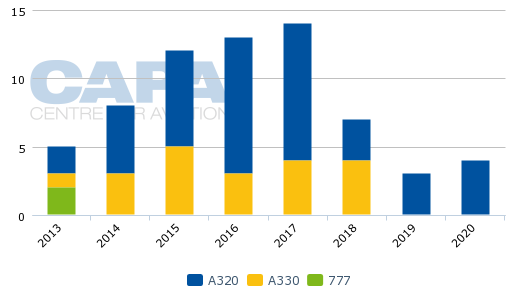 PAL to improve international product but will have to overcome competition

The fleet renewal will improve PAL’s efficiency and its in-flight product, particularly in the premium market. But the Philippines does not have a large premium passenger market.

Inbound demand is mainly driven by migrant workers returning home for visits and, increasingly, tourists as the Philippines emerges as a popular holiday destination. Business passenger demand is relatively small compared to other major Southeast Asian markets. As a result it is strange that PAL has become one of only a few Asian flag carriers that lacks a budget affiliate or subsidiary and is placing its entire future on the top end of the market.

Competition in the Philippines international market will increase further as LCCs continue to expand regionally and start to open medium/long-haul routes. Gulf carriers will also be keen on further expanding in Manila, making it challenging for PAL to compete in the Philippines-Europe and Philippines-Middle East markets. There are opportunities in US market but there is also one-stop competition in this market from aggressive US and North Asian carriers.

PAL remains one of the weakest flag carriers in Asia in terms of network, product offering and financials. Among all the major Southeast Asian flag carriers, PAL is also the only carrier that has not yet joined, or is in the process of joining, a global alliance. This puts PAL at a competitive disadvantage as it tries to focus more on the top end of the market.

The ownership change and re-capitalisation of one year ago gave the group new energy, with the new funds being used to renew PAL’s fleet and expand its international network. Toronto, which was added in late 2012, will be the first of several new long-haul destinations for the carrier, ending a period of several years of little or no growth.

But PAL remains in the red and is unlikely to return to the black in the near term. Most of the group’s long-term challenges remain and competition is only getting tougher.