Three major purchases from three different US carriers have brightened the outlook for aircraft ordering in 2010. The largest, by value, is United Airlines’ order for 25 B787-8, valued at list prices at USD4.2 billion. United also took an option for an additional 50 B787s.

United's Boeing order is a confirmation of a Dec-2009 agreement. United has split its long-haul feet programme equally between Boeing and Airbus, also signing an agreement for 25 A350s in Dec-2009. Deliveries are set to commence in 2016, and will be used to replace the carrier’s B747 and B767 fleets.

Boeing has also take an order for 20 B737NGs from an “unidentified customer”, bringing its total for the year so far to 55. The company took 141 net orders last year. Boeing’s shares were down 1.0% yesterday.

Bombardier has taken an order for 40 of its new CSeries aircraft from Republic Airways, as well as another 40 options. The aircraft are scheduled for delivery from 2Q2015.

The order is valued at USD3.06 billion at list prices, and prompted a 7.5% jump in the Canadian manufacturer’s share price. The CSeries is Bombardier’s first attempt to directly compete with Airbus and Boeing in the large aircraft market. Republic’s aircraft will have 138 seats, in a single cabin configuration.

The order is a major win for Bombardier and for engine maker, Pratt & Whitney, whose P1000G powerplant is the sole engine choice for the type. It is the first order for the type since Mar-2009. It provides a major boost for the aircraft programme, and increases the backlog on the aircraft from 50 orders to 90. 30 aircraft are on order from Lufthansa and 20 from aircraft leasing company, LCI. There are another 90 options for the type.

Another aircraft programme with a relatively thin order book, the Mitsubishi Regional Jet (MRJ), also took a major order yesterday. Trans States Holdings, parent of Trans States Airlines and GoJet Airlines, signed a LOI with Mitsubishi Aircraft Corporation for 50 firm orders and 50 options. This is the first airline order outside of Japan for the MRJ and brings the current number of orders for the type to 65 firm orders and 60 options. 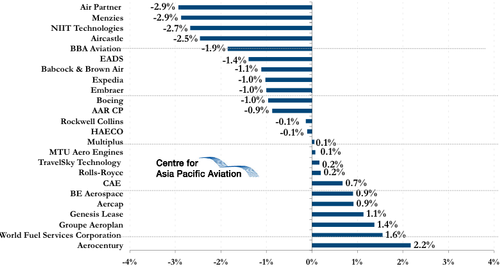