Bangkok Airport continues to be popular hub despite localised bumps

Bangkok has had an airport for a very long time. The previous airport, Don Muang, opened in 1914 as a military facility and by 1924 the field had commercial service. With the introduction of jet aircraft, that airport was becoming too constrained by geographic limitations to allow the evolution of Bangkok into a global hub.

Consequently, from the late 1960s, a replacement facility was planned and in 1973 land was purchased east of the city, a marshland unfortunately named in Thai, Cobra Swamp. However, political and economic events delayed actual construction until the next century with work finally begun in 2002.

In September 2006, operations were transferred to the new airport, named by the King Suvarnabhumi, a Sanskrit word meaning Golden Land, a significant improvement from Cobra Swamp.

Seen as a challenger to Hong Kong and Singapore’s Changi for regional dominance, its debut was marred by construction problems with runways and taxiways as well as shortcomings within the terminal itself. For a period, some operations were moved back to Don Muang, allowing time for repairs and upgrades.

By mid-2007 the airport had corrected most of the problems but a number of the new low-cost carriers operating domestic flights had chosen to remain at Don Muang. All international service, however, is operated at Suvarnabhumi.

Home to Thai Airways and included on most carriers’ networks, the airport occupies a key location between Europe and Asia and has been a stopping point for airlines for decades.

Thai Airways provides just under 40% of the total seats available per week. If its numbers are combined with the other two Thai airlines, Thai AirAsia and Bangkok Air, the national carriers supply about 57% of the available seats across a wide variety of destinations and service levels.

Bangkok was an early-on target for the Gulf airlines with Emirates and Qatar having a sizeable presence. Emirates flies four daily round-trips, one with an A380. Etihad also flies to BKK, but with only two daily frequencies it ends up with the “others”.

And many carriers have fifth freedom traffic rights to and from the airport: Qantas, China Airlines and Eva to Europe, Lufthansa, Emirates, Kenya Airways, Royal Jordanian and Kuwait Airlines to points in SE Asia and United and Delta to Tokyo. Many of these sectors are the remnants of days past when aircraft operated with far less range. 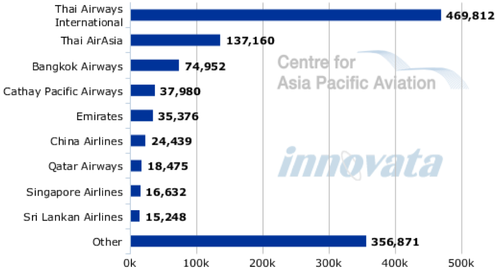 The popularity of the airport as an Asian touchstone is revealed by the distribution of seats to all geographic regions. From the airport one can fly direct to virtually every city in Europe and Asia as well as less common direct services to Africa and Eastern Europe. It is an airport with broad global reach achieved across multiple carriers.

This is confirmed by the following chart that lists the number of airlines active at various Asian hubs, with JFK and Heathrow thrown in as baselines. Clearly BKK is the winner in the region and it’s airline list is only topped by London’s Heathrow.

While it may not have the traffic numbers of Hong Kong or Jakarta, it can boast of a more diverse traffic mix. 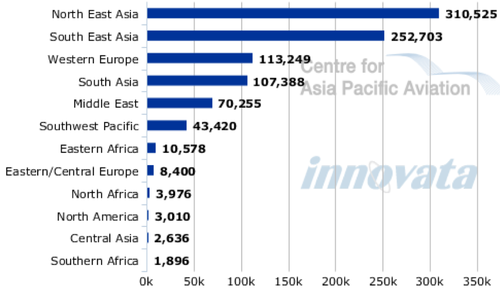 There is also domestic capacity offered at the airport, especially between the capital and the Thai beach resorts to the south as well as to Chiang Mai in the northwest. 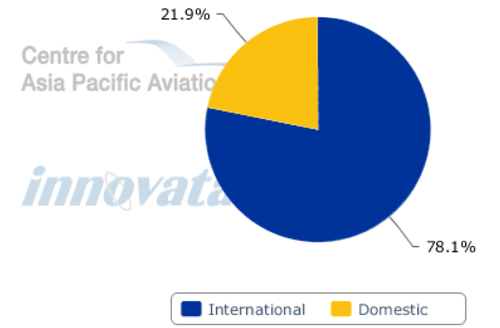 Many of those domestic passengers are international visitors connecting from abroad and thus essentially part of an international journey.

Star Alliance dominates but does not rule

BKK is a Star Alliance hub, with that group supplying just about half the capacity. However, it is important to note the very substantial share attributed to the unaligned carriers. This is due to a) the non-aligned nature of both Thai Air Asia and Bangkok Air and b) the significant number of seats related to the Gulf carriers’ operations.

SkyTeam will soon have a greater presence once its new Chinese partners and Garuda are added while oneworld will benefit slightly through airberlin and India’s Kingfisher. However, Star’s dominance will be unaffected, as the new alliance members will be subtracted from the current non-aligned figure. 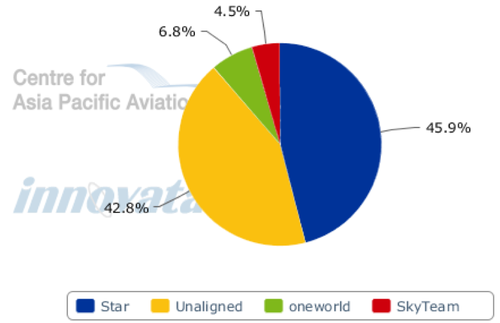 Home to a unique player

As has been noted already, the airport has an interesting carrier mix, dominated by network carriers and supplemented by low-cost entrants. Unique to Bangkok is the 6.6% share of “regional” carrier service, in this case almost completely attributable to Bangkok Air, a small Thai carrier that calls itself a “boutique” airline and provides a premium product across its network. 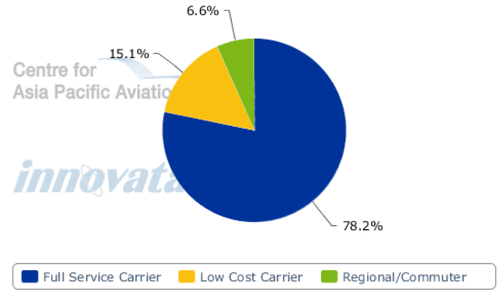 The airline offers airport lounges for all passengers and serves hot meals and alcoholic beverages free of charge on most flights. It is a model not seen elsewhere, and Bangkok Air successfully operates a unique product with BKK as its hub.

Bangkok and Thailand have been favourites of travellers for decades with the popularity of the destination reflected in the broad range of points to which it is connected.

Of late there have been some bumps in the road. The Asian Economic crisis took a toll along with the threat of SARS and the devastation wrought by the tsunami in 2004. More recently, political uncertainty, as well as the famous airport shutdown of 2008, followed by street fighting in Bangkok, have damaged the destination’s appeal for some.

But, in general, the nation remains a popular and inexpensive tourist destination that is well situated and amply served by the world’s airlines. While specific events may alter its position on the “busiest” list, it is probably destined to continue to appear in the top 30.