As Tokyo’s Narita Airport watches international airlines shifting their services to Haneda Airport, it has become evident that the management recognises that there are opportunities in managing foreign airports.

Currently there are three projects that have been put forward – one actual one and two potential ones, and each of them offers their own challenges: operation of a Thai airport with great potential to attract tourist flights; investment in a new North Asian airport; and a possible strategic advisor role for an ambitious greenfield airport in Eastern Europe.

The BBS Consortium in Thailand has suggested that executives of Tokyo Narita Airport could operate U-Tapao Rayong-Pattaya International Airport.

In Jan-2020 Poland's Deputy Minister of Infrastructure Marcin Horała reported that companies are expressing "considerable" interest in financing the Solidarity Transport Hub Poland (CPK) project, and that Narita International Airport Corporation is in discussions to become a strategic advisor for the project.

It is a portfolio which would not look out of place for Singapore’s Changi Airports International and each of them will present their own challenges to Narita Airport Corporation.

Narita proposed as the operator at U-Tapao, which will get a high speed rail link

The BBS Consortium, which was awarded the THB290 billion Eastern Airport City Project at U-Tapao in Thailand, has suggested that executives of Tokyo Narita Airport could operate U-Tapao Rayong-Pattaya International Airport. Chairman of the Royal Thai Navy Admiral Luechai Ruddit has said that negotiations and a contract should be completed by Mar-2020.

The BBS Joint Venture consortium includes Bangkok Airways (which has a 45% stake), BTS Group Holdings (35%) and Sino-Thai Engineering and Construction (20%).

The government will invest THB20 billion in civil works for a second runway and a second air traffic control tower, while the private partner will invest THB270 billion in the construction of the third passenger terminal, the ground transportation centre, the logistics and cargo complex, a cargo village for a free trade zone, and a commercial centre.

U-Tapao, serving primary tourist areas of Thailand, has the opportunity to become a major point of international entry to Thailand, relieving congestion at the two Bangkok airports, to which it is to be connected by a high speed rail line. At present, approximately two million passengers are using the airport each year and the majority of the capacity is split between scheduled low cost carriers and charter operators, with a similar split between domestic and foreign carriers. 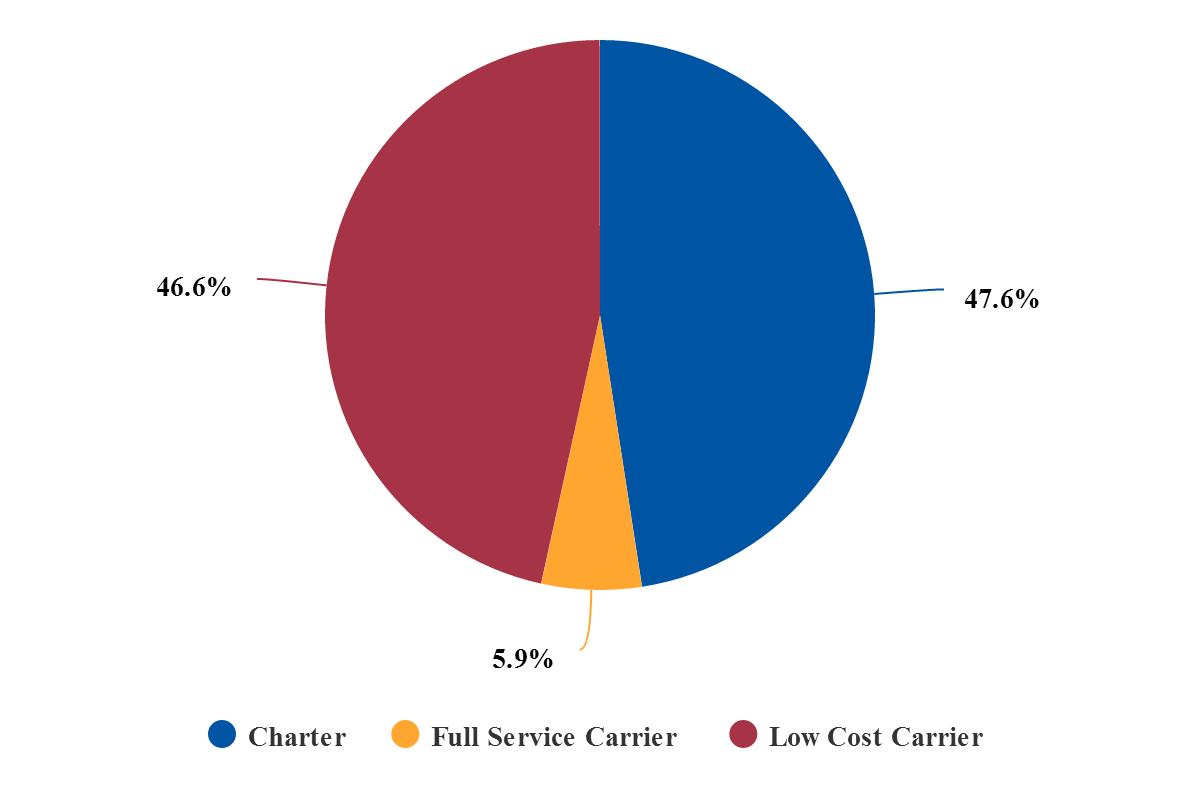 No doubt those factors make the attraction for Narita Airport, which continues to lose track at its home airport to Haneda Airport.

Traffic growth has slowed to a consistent 4-5% since 2015, and British Airways said recently that it would shift all London Heathrow flights to Haneda – which used to be an entirely domestic airport but where international seats now amount to 22% of the total.

It is not the first time that Narita Airport has looked beyond its own shores.

As long ago as Mar-2015 Narita International Airport Corp said it was considering investing in the Mongolian capital's new international airport, then slated to open in 2017, as it sought to expand internationally. It intended to partner with Japan Airport Terminal and Jalux for the project, receiving support from the Japan International Cooperation Agency.

That project was settled in Jul-2019 when an extended consortium of Narita International Airport Corporation, Mitsubishi Corporation, Japan Airport Terminal and Jalux signed an agreement with Mongolia's Government to operate and manage the New Ulaanbaatar International Airport for 15 years under the terms of a joint venture between them, with Mongolia's National Development Agency also. The JV is expected to begin operation of the airport in 1H2020.

The current airport is restricted. The single runway is used in one direction for arriving aircraft and in the opposite direction for departures. The new airport will significantly expand capacity. It is located at the Khöshigt Valley, 52 kilometres (32 miles) south of Ulaanbaatar city centre.

Narita may have its work cut out there.

Until quite recently Mongolia had a stagnant aviation market and in order to drive growth and ensure that the new airport does not turn into a white elephant, the government still needs to adopt a more liberal aviation policy and stop protecting its flag carrier.

MIAT Mongolian Airlines still has 44% of the capacity. Two years ago the government refused to allow Kazakhstan’s Air Astana to launch flights and declined to approve more capacity for Turkish Airways that was needed for new nonstop flights from Istanbul, although its attitude has mellowed since. 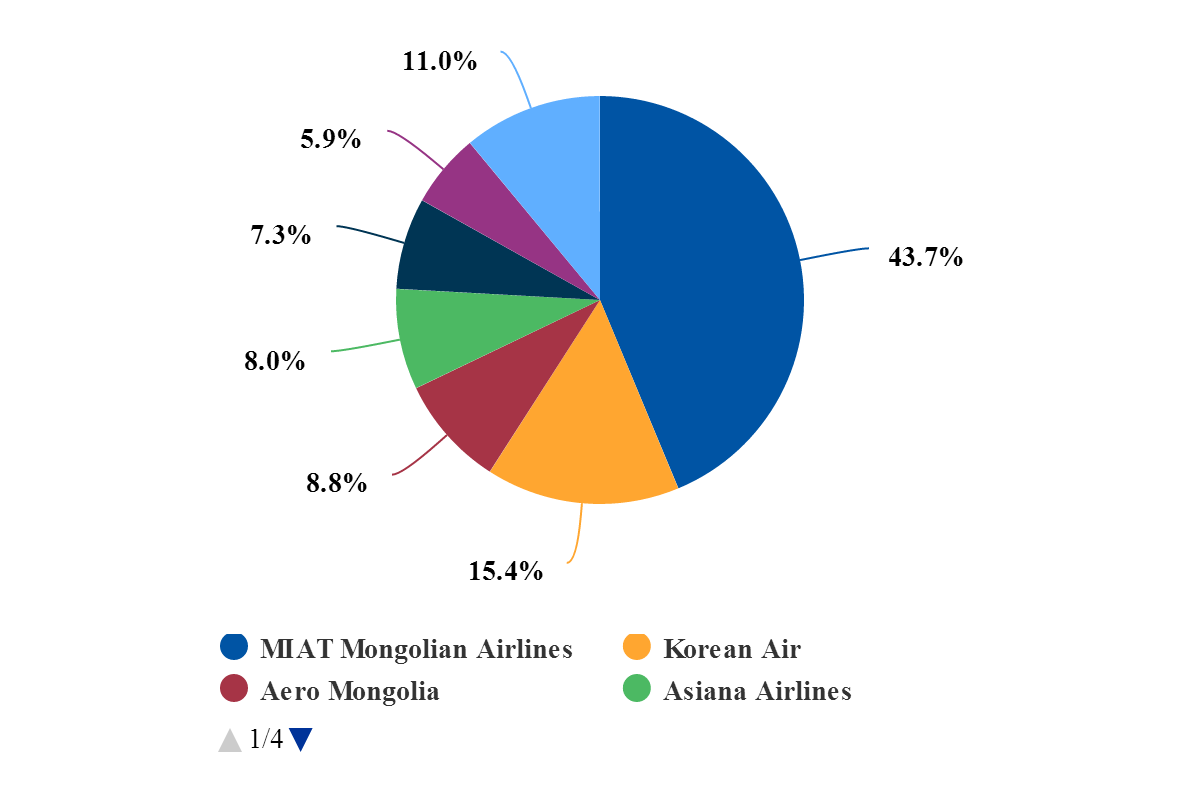 The Mongolian market has considerable potential, and increased tourism would have an overall economic benefit from increased competition would be greater than the negative impact on the government-owned MIAT Mongolian Airlines.

There is also a need to free up all ground handling services and to ensure that the airport’s charges are low enough to support new flights. That could involve the creation of marketing incentives that would be entirely new to a government operator, but not to Narita Airport Corporation.

In fairness to the airport, it has done quite well, growing passenger numbers in 2017 and 2018 (+22.3% and +13.6% respectively, 2019 figures are not yet available), following two years of decline in 2014 and 2015 (-7.9% and -6.2% respectively). But all its international business is centred on North Asia. The busiest European route (excluding Moscow and Istanbul) is Berlin, with approximately 20,000 passengers a year, but that is not a year-round service.

So unlike Thailand, Mongolia is a sparsely-populated country with only just over one million living in the capital, few domestic services and limited foreign inbound tourism, which hovers in the region 400,000 – 500,000 per annum.

Narita's experience prompts Polish government interest in it as a strategic advisor to its greenfield airport?

The most recent declaration of interest is the most intriguing of all. In Jan-2020 Poland's Deputy Minister of Infrastructure Marcin Horała reported that companies are expressing "considerable" interest in financing the Solidarity Transport Hub Poland (CPK) project, and that Narita International Airport Corporation is in discussions to become a strategic advisor for the project.

CPK will set up a new USD7.2 billion Central Polish Airport, although it won’t be far from Warsaw, about 40km away.

The airport will replace the existing Chopin Airport, and the idea is to connect it to major Polish cities by high speed rail in two hours or less. The initial capacity of 40 million ppa is expected to rise in time to 100 million ppa, which is not far off twice the number in the entire country presently.

There is considerable opposition from regional airports, which could become redundant under this scenario, but the government is adamant that the project will go ahead. A second stage of strategic consultations is currently under way.

Presumably, the attraction of Narita Airport Corporation to the government is threefold: its experience in handling international air traffic for a capital city, its experience of integration with rail (it owns a rail company that runs to the airport), and its financial acumen.

So three projects here: potential operation of a Thai airport with great potential to attract tourist flights; investment in a new North Asian airport where the regulatory regime will test Narita Airport’s resolve; and a possible strategic advisor role for an ambitious greenfield airport in Eastern Europe.

It is a portfolio which would not look out of place for Singapore’s Changi Airports International and each of them will present their own challenges to Narita Airport Corporation.