Madrid Barajas: an airport with a focus

As CAPA continues its examination of ACI’s top 30 airports in 2010 using data available on the CAPA website, we come to Madrid, an airport ranked 27th in 1999 that has seen development and growth in the 21st Century.

Passenger numbers have almost doubled, new runways have been added, along with a spiffy new terminal for home carrier Iberia and its oneworld partners: all of this change made Madrid No 4 in Europe in 2010, behind London Heathrow, Paris CDG and Frankfurt.

Much of this growth resulted from the economic boom of the 2000s, the end of which has been especially problematic for Spain. As a result, the outlook for 2011 is somewhat less optimistic. 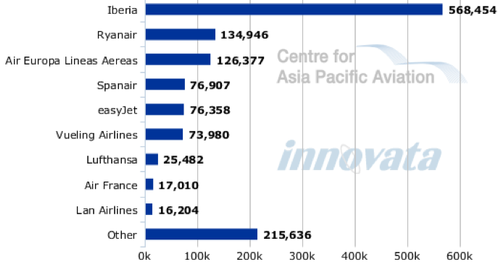 Very much unlike the other top European hubs, Madrid has a substantial low-cost presence, with Ryanair, the monarch of bare-bones travel, holding second position. The airport is also unusual in that it hosts Spanish carriers belonging to all three major alliances: Iberia in oneworld, Spanair in Star and Air Europa in Skyteam. However, in terms of global impact neither Spanair nor Air Europa can rival Iberia. 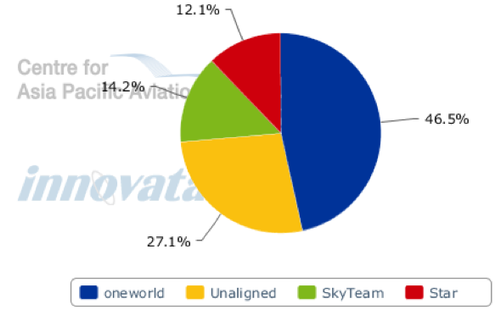 However, Spain, unlike other European nations, does have a number of airlines with long reach, enabling a better distribution amongst alliances than was seen at Frankfurt, for instance.

It is also interesting that the percentage of unaligned carriers is much higher than was seen at the previous hubs; doubtless the effect of low-cost presence. The unaligned percentage is a close mirror of the LCC percentage. 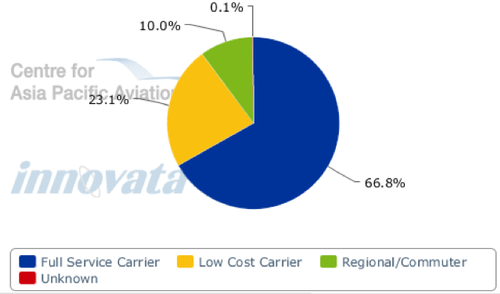 Hub for the Spanish-speaking world

However, by far the biggest differentiator between Madrid and its large European peers is its focus. Unlike the rest of the top 30, the intercontinental focus from the airport is pretty much limited to one direction, south-west.

The airport is the nexus of travel between Europe and all points in South and Central America, providing multiple non-stop flights to the region. But with the exception of a few services to Africa and some to North America, that is just about the whole story. 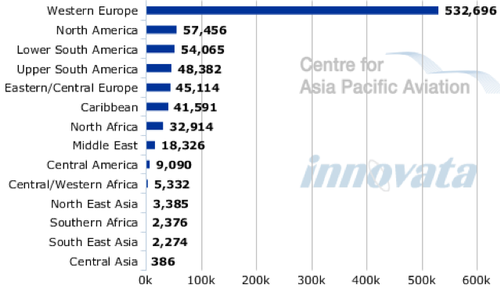 A stands for Asia and absent

Unlike every other major European hub, Madrid’s Spanish airlines have only minimal service to points in the Middle East and not a single flight to any point in Asia. Interestingly, the foreign carriers appear to be of a similar mind, in that the only nonstop flights between Madrid and Asia are five Air China A330 trips to Beijing and three Thai 744 flights to Bangkok.

There is no direct service to India, Japan, Hong Kong or Singapore. Even the Gulf carriers display an unusual restraint with Emirates and Qatar each having but a single daily flight to their hubs.

In a world where Asia is poised to be the primary aviation market, Madrid is curiously cut off. And, though absent from the top 30, Spain’s other main gateway airport, Barcelona, displays a similar pattern.

Interestingly, Air China’s access to South America is via its BJS-MAD-SAO routing, perhaps in anticipation of market growth. Much of the South America/Asia traffic is now diverted via Dubai or Istanbul rather than Madrid.

This interesting route structure further limits oneworld’s reach eastward from Europe, funneling all Madrid’s Asian traffic either via Heathrow and its congestion, or over Helsinki, which has but a single daily Finnair flight between the hubs. Three alliance partners, JAL, Cathay and Qantas have no direct link to the Spanish carrier’s hub and network, again unusual in today’s interlinked alliance world. 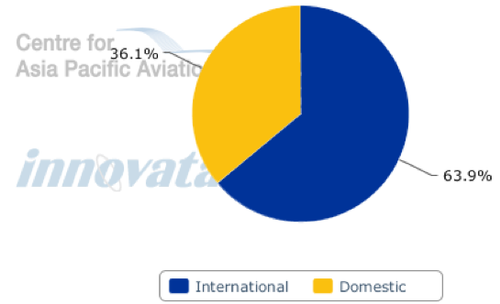 And yet another way in which MAD differs is the large percentage of domestic seats generated at the airport. At more than a third, the airport far surpasses any of the previous three that have been examined, and for a major hub, may be Europe’s most domestic. This is due in part to the contribution of the Madrid-Barcelona route, which according to CAPA’s own data, is one of the world’s busiest.

Additionally, with multiple Spanish carriers, there is a degree of domestic competition unseen in the German and French markets.

Fares to New York’s JFK airport average between USD1000 and USD1250 for the 7170 mile roundtrip, above the lowest from Frankfurt but below London and Paris.

Oddly, the fares to nearby Newark were markedly higher with the averages in May in excess of $2500, again a difference not seen at other hub airports.

With the consolidation of British Airways and Iberia, there is every expectation that we will see some additional growth diverted to Madrid, perhaps even a tying of loose oneworld ends. The facility has capacity, modern facilities and, if the Spanish economy eventually rallies, a solid base for expansion. Plus, as South America continues to develop and prosper, the airport’s ties to that region will be even more important.