Despite strides made by Brazilian carrier Gol in cost containment and yield growth during 2Q2013, the now-familiar woes of a sluggish Brazilian economy and currency devaluation continued to weaken the airline’s overall financial performance as the company recorded a BRL433 million (USD187 million) loss for the quarter.

It is an improvement over the BRL715 million (USD309 million) Gol bled during 2Q2012, and even as Brazil’s currency has weakened since 1Q2013 Gol maintains that it will still post a positive operating margin in the low single digits for 2013. This would result from structural changes it has undertaken during the last year – namely dramatic cuts in its domestic capacity. But it is growing increasingly doubtful if Gol can reverse annual losses it has posted during the last two years during 2013 as its 1H2013 losses were BRL508 million (USD219 million), and no signs of an upturn in the Brazilian economy have surfaced for 2014.

Gol continued to post gains in unit revenues and yields during 2Q2013, building on improved momentum in those metrics during 1Q2013. But similar to 1Q2013, the carrier appears to continue to trade yield for load factors reflected in a 10.5% rise in passenger unit revenues and 13.4% increase in yields. 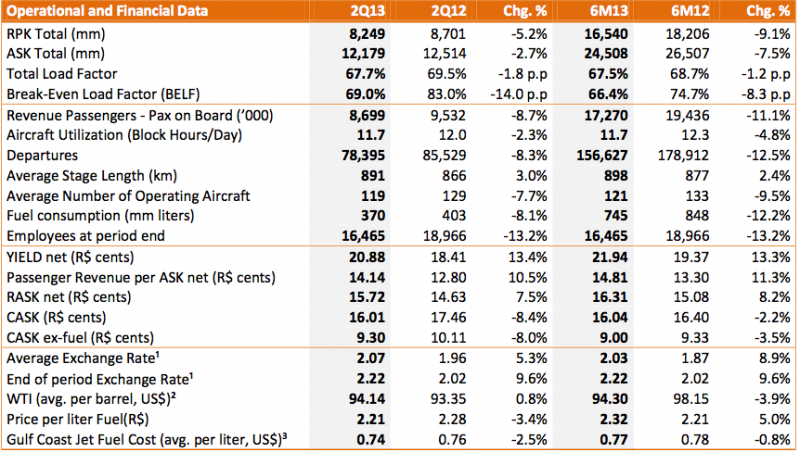 Some of the yield improvement was also a result of Gol targeting a higher number of business passengers as the company estimates its share in the corporate segment grew 3ppt year-on-year during 1H2013 to 33.5%. During Jun-2013 Gol executives noted the carrier was working with its major codeshare partner and shareholder Delta to boost its corporate share.

But Gol’s system load factor fell 1.8ppt to 67.7% while domestic loads decreased 1.3ppt to 69%. This also reflects a continuing trend of Gol recording domestic load factors below the industry average, which according to Gol’s analysis of ANAC data grew 3.8ppt to 74.4%.

Gol’s main domestic rival TAM has maintained load factor expansion as it cut 1H2013 domestic capacity by 10% (compared to an 11% drop at Gol), growing load factors 9ppt year-on-year and traffic by 2%. Gol’s traffic fell 11.7% during 1H2013 while loads were essentially flat at 69%.

Recently Gol executives opted to clarify some interpretation by the Brazilian government regarding loads on its international operations – specifically service to Miami and Orlando from Rio de Janeiro via a stopover in Santo Domingo launched in Dec-2012.

The carrier only sells 155 seats on service from Rio to the US with the stop in the Dominican Republic due to weight limitations on the first leg of the flight out of Rio. But on the return trip from the US to the Dominican Republic the carrier sells 177 seats. The carrier’s management observed the seats and load factors reported by Brazilian regulator ANAC did “not correspond to the reality that we see in those specific two flights  where we have a different configuration from the aircraft..From July on we are seeing a very strong load factor”.

Using ANAC’s methodology, Gol’s load factor on international flights during 2Q2013 (which also include Cordoba and Rosario in Argentina, Buenos Aires (Aeroparque and Ezeiza), Monetvideo, Uruguay and Caracas, Venezuela) fell 3.6ppt in 2Q2013 and 5.1ppt to 57.2% and 5.1ppt in 1H2013 to 59.3%. The carrier will need a strong performance it improve loads on its international flights throughout the remainder of 2013. For the 1H2013 its capacity in international markets increased 34% while traffic increased 23%, driving loads down 5.1ppt.

Beginning in 2012 Gol undertook a significant domestic capacity cutting scheme that has carried over into 2013 as 2Q2013 supply declined 5.8%, joining the aforementioned 11% drop in 1H2013. The figures for first half of 2013 were higher than Gol’s original projections of an 8% to 10% decline.

Now Gol is further refining its domestic capacity cuts for 2013 (after cutting 130 unprofitable flights from the combined Gol-Webjet network in 2012) to 9% from 7%. Beginning in Aug-2012 the carrier plans to eliminate 200 flights per week, as its fuel cost are expected to climb to record highs and further pressure on its costs due to the depreciation of the BRL.

Gol economic, domestic and cost guidance at the end of 1Q2013

Gol economic, domestic and cost guidance at the end of 1Q2013

Despite the BRL depreciating roughly 5.3% against the USD during 2Q2013, Gol still managed to cut its unit cost excluding fuel by 8% year-on-year.

On an ASK basis, Gol’s cost declined in almost every line item except for sales and marketing, which increased 18% and a 10.5% rise in aircraft and traffic servicing.

Gol’s expense per ASK in salaries, wages and benefits fell 13.7% year-on-year during 2Q2013 as the company’s workforce fell 13% to 16,465 at the end of 2Q2013. During an earnings discussion carrier CEO Paulo Kakinoff remarked that there might be further opportunities for the carrier to optimise the number of personnel to keep its costs in line and improving fuel efficiency even as it braces for higher fuel costs during 2H2013.

Another area of focus for Gol during the last year is de-leveraging its balance sheet. During 2Q2013 the spin-off of its loyalty programme Smiles helped boost its cash balance to BRL2.8 billion while its leverage ratio fell 44% from 1Q2013 to 15.5x. However, debt from 1Q2013 to 2Q2013 increased from BRL3.3 billion (USD1.4 billion) to nearly BRL3.4 billion (USD1.5 billion). 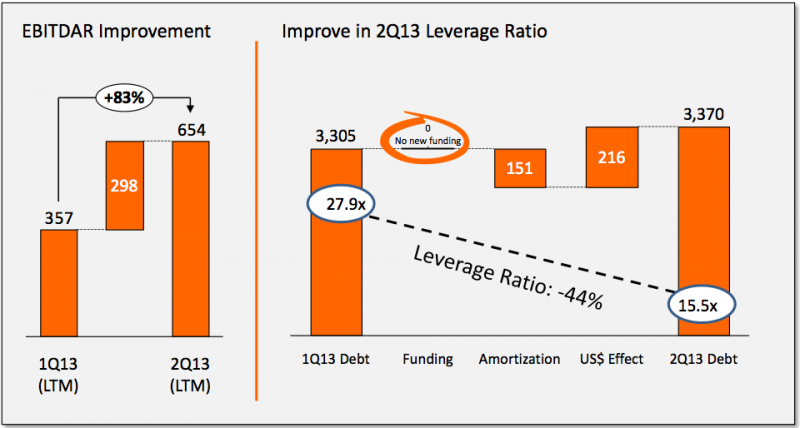 But at the end of 2Q2013 nearly 76% of Gol’s debt was denominated in USD, up 6.3ppt the year prior, which could pressure the carrier’s efforts in de-leveraging if the BRL continues its slide against the USD.

During the last year Gol has seemingly done everything in its power to beat back the still-weak Brazilian economy including ceding market share as it dramatically slashed its capacity.

The carrier’s plans to deepen its capacity cuts for 2013 reflect the recent shift in the macroeconomic scenario, said Mr Kakinoff. He stressed during 2H2013 Gol will have to deal with higher fuel prices, additional currency pressure and prospects for a further reduction in Brazil’s GDP growth.

Gol’s CEO believes its capacity reductions, cost structure improvements and balance-sheet de-levering should produce positive operating margins of 1% to 3% for 2013 - commendable given the challenges specific to the Brazilian domestic industry, which essentially recorded flat traffic growth during 1H2013 despite the aggressive reductions in supply by Gol and TAM.

Absent from remarks offered by Gol executives is a prediction of exactly when the carrier hopes to return to profitability.

It is easy to understand why management would avoid making in declarations in that regard, but the disappointing performance quarter after quarter is no doubt wearing out investors getting impatient for a turnaround. With prospects for Brazil’s economy for 2014 looking uncertain at best, Gol’s rebound seems far off on the horizon.