Brazil’s domestic market has cooled down along with the country’s slumping economy, recording RPK growth of less than 0.1% in 1H2013. While growth should return in 2H2013 it will be very modest and far below previous levels.

Brazil was one of the world’s fastest growing domestic markets in 2010 and 2011, when domestic RPK growth of 23.5% and 15.9% was recorded. Growth slowed to 6.8% in 2012 as carriers started to cut capacity and trim back on expansion plans.

Load factors have improved significantly since mid-2012, providing a glimmer of hope that capacity levels are now sustainable following a period of irrational competition. With capacity returning to more rational levels and four airline groups accounting for over 99% of the market following a wave of consolidation, profitability should eventually improve in the world’s fourth largest domestic market.

Load factors improve as industry-wide capacity is cut by 6%

Brazil’s ANAC has reported essentially flat domestic growth in 1H2013 with RPKs remaining at 42.2 billion. ASKs were down 6% year-over-year to 60.3 billion, resulting in a 4.4ppts improvement in the industry’s average load factor to 74.4%.

Improving load factors on the back of capacity cuts continues a trend which began in mid-2012. Domestic ASKs in Brazil were down 3% in 2H2012, after being up over 8% in 1H2012. As the demand environment in 2012 remained relatively steady albeit weak – with RPKs up 7% in 1H2012 and 6% in 2H2012 – the capacity cuts were able to lead to an almost immediate improvement in load factors.

In 1H2012 the average domestic load factor in Brazil dropped slightly, by 0.8ppt, to 70%. But year-over-year load factors improved by 6.3ppts in 2H2012 to 75.9% as capacity levels decreased. Brazil’s two major carriers have continued tight capacity discipline in 1H2013 as the Brazilian economy has remained weak.

Brazil’s GDP grew by only 0.9% in 2012, initially catching many including airlines by surprise. GDP growth is expected to be about 3% in 2013 – an improvement but not strong enough to justify a return to prior capacity levels.

A strong economy, growing middle class and low fare stimulation drove the high double-digit passenger growth figures from earlier this decade. But the slowdown in the economy has come with a drop in consumer spending, which had fuelled Brazil’s economic growth in recent years including the surge in domestic air travel. It also has come with a tightening of credit, which has further limited the discretionary spending among the middle class.

Brazil’s carriers, particularly LCCs, had tapped into the rapid rise of discretionary spending and huge increase in the number of Brazilians with credit cards. This led to annual domestic passenger traffic for the first time surpassing the number of inter-state bus passengers.

As the market was relatively mature and already penetrated when the economy started to slow, airlines quickly found themselves in a position of over-capacity. This was particularly pronounced on trunk routes while demand held up relatively better across regional and secondary point-to-point routes, a segment of the market focused on by Azul.

While the slowdown has been painful for all Brazilian carriers, a healthier industry has emerged. The capacity cuts that have been implemented at market leaders Gol and TAM have led to more rational capacity levels while growth at Azul also has slowed down.

Brazil now has fewer airlines than other similarly sized markets

There have also been important fundamental changes over the last two years as Gol acquired Webjet and Azul merged with TRIP. LCC groups Gol and Azul and LATAM Airlines Group subsidiary TAM now account for over 92% of the Brazilian scheduled domestic passenger market. Add in the 7% share from Brazil’s second full-service airline, Avianca Brazil, and 99% of the market is now controlled by just four carriers. Four small regional carriers, the largest of which is Passaredo, account for the remaining 1%.

Two large LCCs and two full-service carriers provide a healthy balance, making it likely that all four players should be able to survive any rough patches. The roughly similarly sized domestic markets of Japan, Indonesia and India all have a much larger number of players.

Indonesia currently has four LCCs and three FSCs competing on main domestic routes. India also has four domestic LCCs (soon five) along with two FSCs. Japan has two FSCs and nine much smaller low-cost or hybrid carriers. Even when factoring in that Indonesia, India and Japan have airline groups that have both LCCs and FSCs, Brazil has significantly fewer players.

Gol, which has been the most aggressive at implementing capacity cuts over the last year in a bid to reverse losses, has seen its share of the domestic market drop by 5ppts. In 1H2013, the LCC group accounted for 35.3% of total domestic RPKs, down from 40.1% in 1H2012. 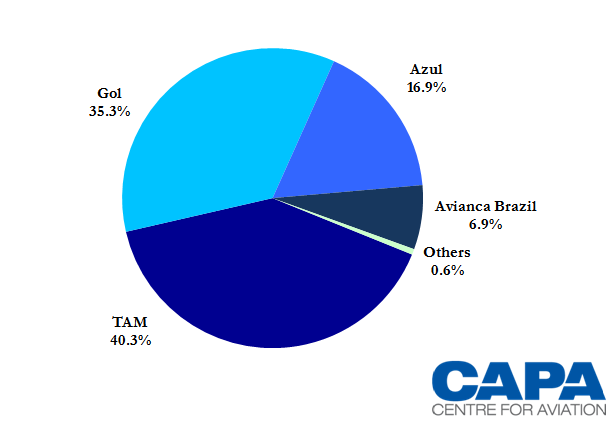 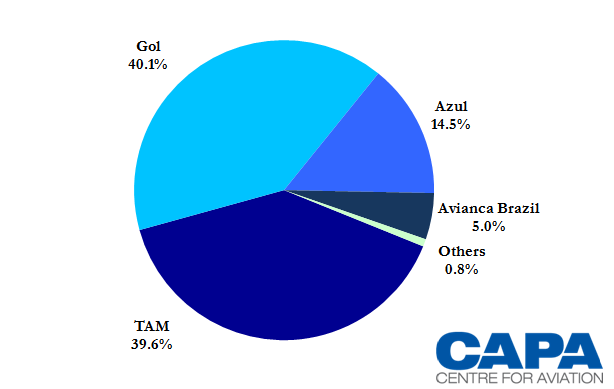 The Gol group slashed domestic capacity by 11% in 1H2013. Some of the cuts have been achieved as Webjet was closed in late 2012. Gol has taken over most Webjet flights and slots while cutting back on Gol routes.

The group has since continued to cut back capacity across the integrated operation and expects ASKs to be down 9% in 2013 compared to 2012. The year-over-year reduction will be lower in 2H2013 compared to 1H2013 as Gol started cutting capacity in 2H2012. Over the last year the group accelerated capacity cuts several times.

TAM cut domestic ASKs by 10% in 1H2013 but recorded a 2% increase in RPKs as its load factor improved by an impressive 9ppts. This continues a trend that began in 2H2012, when the carrier started to modestly cut capacity while growing traffic. 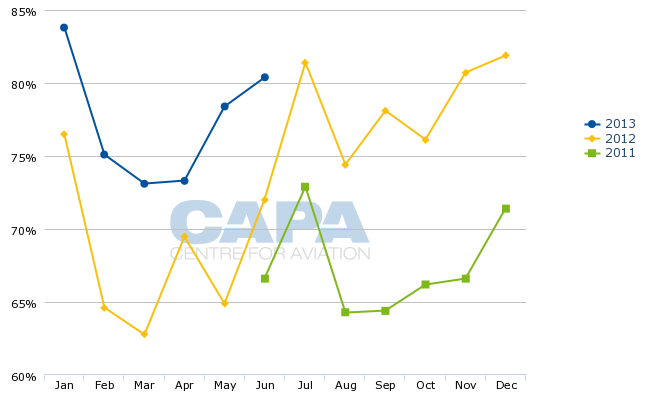 Growth at Azul slows as IPO is delayed

The 11% ASK growth figure represents a significant slowdown in expansion for the group. Azul and TRIP independently recorded ASK growth of 28% and 41% respectively in 2012. In 2011 their growth was 69% and 63% respectively.

The slowdown in Brazil’s economy and aviation market has also impacted Azul’s plans for an initial public offering. The group filed for an IPO in May-2013 but about a month later postponed the plans.

See related report: Azul’s IPO is at a challenging time for economic and traffic growth in Brazil – but offers potential

Azul could still attempt to have the IPO before the end of 2013. But the group will likely end up having to wait longer for market conditions to further improve.

Avianca Brazil has taken over the position as Brazil’s fastest-growing airline, growing ASKs by 33% in 1H2013. RPKs were up by 37% as the carrier improved its industry-leading load factor by 2.4ppts.

Avianca Brazil, however, also has slowed down the pace of expansion in response to the slowdown in the overall market and economy. The carrier’s ASKs were up 82% in 2012.

Avianca Brazil has steadily increased its domestic market share since early 2010, when its market share dipped to as low as 2% following a restructuring. While its 7% market share for 1H2013 represents a new record for the company, there should be further growth opportunities as TAM and Gol continue to cut back. 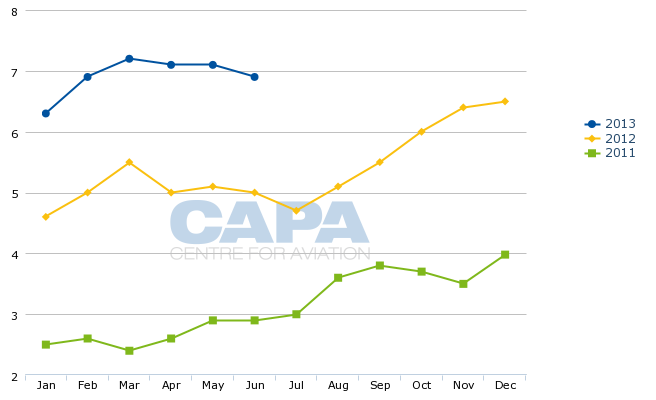 Avianca Brazil and Azul are entirely domestic operators. Gol and TAM have both been growing in the international market while cutting domestic capacity.

Gol reported a 34% increase in international ASKs in 1H2013 but on a low base as its international operation is about one-tenth the size of TAM’s. Gol’s international RPKs were up 23% in 1H2013, resulting in a 5.1ppts drop in international load factor to a disappointing 59.3%. Gol also has been impacted by challenging conditions in the Brazil-US market, which it entered in late 2012 with one-stop services via the Dominican Republic.

Gol will need higher load factors across both its shrinking domestic and expanding international operations in order to return to profitability. Gol incurred a net loss of BRL1.5 billion (USD745 million) in 2012 and a loss of BRL75 million (USD37 million) in 1Q2013.The group will report 2Q2013 earnings on 12-Aug-2013.

In mid-2012 TAM also merged with Chile-based LAN, resulting in establishment of the LATAM Airlines Group and an even more balanced portfolio. LAN relies more on the international market than TAM but also competes in several domestic markets throughout South America where conditions have been more favourable.

Brazil lags behinds the rest of Latin America – for now

The Latin American market generally remains buoyant but is being dragged down by the slowdown in Brazil as the Brazilian domestic market accounts for nearly one-third of the region’s total seat capacity. Latin America airline association ALTA reported 7% passenger and RPK growth for its members in 1H2013. A healthier Brazilian domestic market would have almost certainly resulted in double-digit growth as Gol and TAM are among ALTA's largest members.

The Brazilian domestic market will likely again show some modest growth in 2H2013 and year-over-year comparisons will be more favourable given that airlines started to cut capacity in 2H2012. Brazil remains one of the biggest emerging markets and the outlook over the medium to long-term remains bright for the market and the four remaining players. But conditions for the short-term will continue to be challenging.