Lufthansa sees itself “distinctly apart from our competitors”; but shareholders uneasy

Lufthansa Chairman and CEO Wolfgang Mayrhuber is no shrinking violet. With the airline’s report on good 2008 results, the Lufthansa head is clearly seeking to set his airline apart from his weaker colleagues in Europe: “The achieved economic result sets us distinctly apart from our competitors and places us in a positive light,” he claims.

For 2008, Lufthansa reported an operating result of EUR722 million, against a 2007 profit of EUR826 million. The contribution to this by the much smaller subsidiary, SWISS, was a remarkable EUR314 million.

But there are some signs of doubt creeping into the market, if not into the Cologne headquarters. The world is an uncertain place at present and many investors’ appetite for risk is not what it used to be. The short term has become king and long term goals don’t have the shine that they used to.

But shareholders beg to differ; Mayrhuber “bitter” about that

It may be similar doubts that have caused Lufthansa’s share price to fare worse this year than its main rivals, Air France-KLM and even the apparently beleaguered British Airways. Since the beginning of the year, the three majors have pretty much followed the same path – until this month.

For some reason, Lufthansa has not been caught in the updraft of the Wall Street rise over the past three weeks, lagging well behind its rivals on an indexed basis. 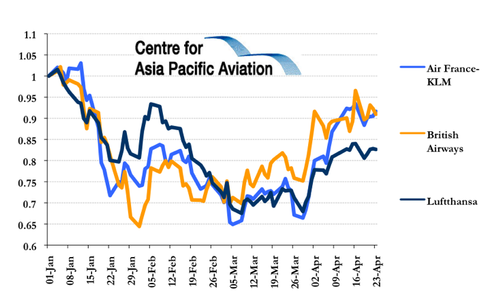 At this, Mr Mayrhuber shows a little frustration – even bitterness - with the market, which is apparently less positive than he about the outlook: “This is something that neither you, nor we can be satisfied with.  The share price of our company fell by almost 40 % during the past year. We are not the only ones on the stock exchange to have suffered, and it is no consolation that we are clearly outperforming our major competitors in the monthly average; however it is still very bitter; especially bitter, because our own strong and stable performances, which we have achieved in an extremely difficult environment, do not seem to count for much.

“The drop in the share price clearly shows that the overall economic conditions weigh considerably heavier and are decisive. At present, the share has given up about 12 per cent since the beginning of the year. However, we remain optimistic and I feel the current share price also offers opportunities.”

This is an interesting response by the Lufthansa CEO. It just may be that the market is actually looking for lowered risk profiles at present and that the airline’s bold measures – which may in fact turn out to be appropriate in the long run – are not the preferred option in the current economic climate.

If that is the case, this is not a good time to be out of step with market sentiment.

Lufthansa is still very much a European airline: consolidation essential

Nearly 70% of the airline’s revenues are Europe based and it is clear from Mr Mayrhuber’s comments that this is going to have to change, as Asia and the Middle East expand rapidly as global forces. He sees consolidation as the only competitive response – presumably under the ownership of Lufthansa.

In his presentation Mr Mayrhuber noted: “The weight in global competition is shifting towards Asia and its megacities. The US carriers are consolidating themselves through mergers. They are creating the decisive network density that they require in order to compete and the market penetration from which they can independently operate on an intercontinental level.”

A change in tone towards Middle East airlines

There was also a subtle shift in his previously aggressive statements against the expansion of the Middle East airlines. Where 70% of Lufthansa revenues are European, Mayrhuber clearly sees a need to extend the pool well beyond the country’s borders – just like his Middle East competition:

“There is a massive increase of capacities in the Middle East – even now, at a time when capacities are being reduced everywhere else.

“These excessive capacities are not oriented towards regional demand, but aim clearly towards forceful expansion and are being unflatteringly, cast upon the market. Thereby they are exploiting the geographic location, as well as immense external and internal cost advantages.

“Europe must react strategically and operationally, for example, in the form of sustainable, competitive airline structures. The continued consolidation of European air traffic is one option, whereby the economic boundaries here, are visible to the buyers.”

The new tone may have something to do with Emirates Airline last month drawing the attention of the German government to the fact that the UAE carrier is a major buyer of Airbus aircraft – and therefore a supporter of the German workforce. But it is also a recognition of the need for the airline of the future to be well established globally, where aviation’s geography is being reshaped by new long haul aircraft and liberalised market access.

Still a lot of (consolidation) balls in the air

Lufthansa’s rush to consolidate by acquiring foreign European airlines is still under way. But these must be enormously time consuming. As Mr Mayrhuber notes, “The acquisition of Brussels Airlines and the takeover of Austrian are still subject to reservations, as certain conditions have not yet been fulfilled.

“Once we have successfully mastered all of the obstacles, our position in and for Europe will be stronger. Austrian Airlines has valuable connections to the Eastern European markets. These are currently also having problems, however there is a promise here of above average growth during the medium and long term.

“Brussels Airlines offers opportunities to improve the connection of Europe’s capital to the Lufthansa network. In addition, Brussels Airlines scores points with a strong presence on the African market and adds a further 14 destinations to our network.

“Both companies have been seriously hit by the current weak demand and are working on result securing measures. They hope to soon be able to benefit from the synergies in the Lufthansa Group. The long-term
logic of the market speaks clearly in favour of these mergers.

“The acquisition of the majority share in bmi is also still subject to the approval of competition and regulatory authorities.”

There may be just the slightest hint of some impatience here, as the short term revenue priorities are forced to give way to long term outcomes.

The success of SWISS as a smaller airline but bigger revenue earner is also illustrated by where the new aircraft orders are destined. Over the next two years, SWISS will be a major beneficiary of new long haul aircraft, with 11 A330-300s arriving over the next two years.

The reward, unfortunately  for SWISS, is that effective 1-Jul-09 it loses to Cologne its well-respected leader, Christoph Franz; he returned to Lufthansa head office to become CEO of the newly created Lufthansa Passenger Airlines and Deputy Chairman of the Lufthansa Executive Board – in the process becoming the heir to Mayrhuber’s throne. 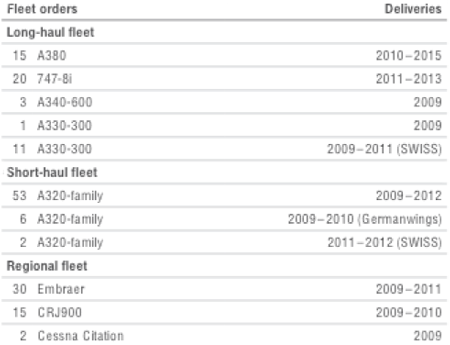 With its fleet orders, the mainline airline will be hoping too that the market turns soon, with a total of 35 A380s and B747-8s for delivery starting next year (although some of this capacity will undoubtedly replace older equipment). Another 59 A320s and 45 regional are due for delivery by 2012.

Meanwhile however, outside the passenger operations, Lufthansa has the advantage of some productive elements in its Group. MRO, for example, contributed 21.9% to the bottom line last year. At the same time, the contribution from passenger revenues was down by 6.6%, despite the strong contribution by SWISS.

Lufthansa cannot be accused of standing still while the world changes. As well as last year’s (still unfinished) acquisitions, the carrier established an Italian subsidiary and is still understood to remain acquisitive, with SAS still in its sights, for one.

But, for the future “The crane (Lufthansa’s logo) is a tenacious bird. It can handle a little bad weather and knows when to take evasive action if the turbulence becomes too strong.”

In 2008, says Mayrhuber, “we were able to maintain our strategic course and possess a solid foundation, both financially and operationally. This represents a decisive advantage in overcoming the current crisis. With the excellent result of 2008 we have proven that the confidence of our shareholders in us is justified.

However, 2009 has a long way to run and it is only the bold and the foolish who will predict a full year profit at this stage and in this environment. While Mr Mayrhuber may be bold, he is not foolish enough to stand behind a statement that Lufthansa will definitely be the exception to the loss makers.

In the end he refused to forecast either a profit or a loss (unlike his weaker competitors who have already conceded defeat on this issue). Mr Mayrhuber concluded his presentation by saying: “At this stage, it is still difficult to issue a concrete forecast for 2009. We expect a result that will be clearly below the previous year’s result; however, whereas our major competitors are forecasting losses, our aim for 2009 remains a clearly positive operating profit.”

Mayrhuber has a clear vision that the airline must consolidate into a larger being if it is to remain powerful – and therefore, goes the logic, profitable. He will be hoping that the shareholders will believe in his pro-active stance.

Whatever happens from here on, he is not going to die wondering.