Lufthansa losses ugly. Is this a strategy in trouble? Board still upbeat on “positive demand trends”

Lufthansa lost EUR298 million in the first quarter of this year. Operating losses were EUR330 million, on revenues of EUR5.8 billion. The full results are not published until today; these will be of relevance only if they indicate a solid direction for yields for coming months. Competition on short haul routes is still intense and, with the exception of Asian markets, most airlines are indicating that there is nothing to confirm a revival of long haul markets.

The first quarter losses compare unfavourably with last year’s unhappy period. In particular, the extreme decline in operating losses is something that will be concerning the company’s strategists. 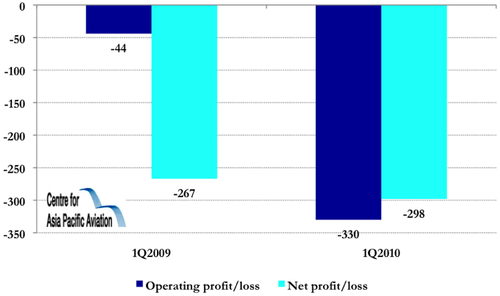 That an EUR800 million increase in revenue has been accompanied by this sort of loss – apparently significantly the result of higher fuel costs, now at around double last year’s – offers little comfort, even if things are improving. This merely suggests that the bigger the operation at present, the bigger the losses. 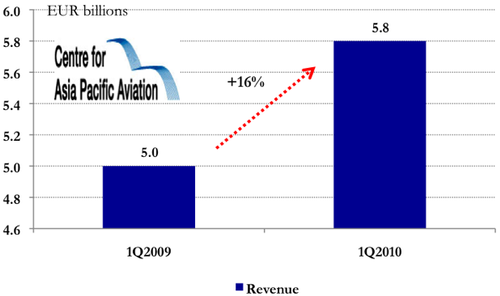 As outlined by the brief advance notice of today’s results, Lufthansa attributed its worse than expected losses also to other causes:

These problems look likely to head into the future too, with some new factors providing negatives for the second quarter.

The challenging task of getting from here to prosperity

Having bmi dumped on it by a grateful seller, Sir Michael Bishop, has not helped Lufthansa one bit, at the same time distracting even more management attention away from the core business.

The tradeoff for that is being able to offer a combined product on a clutch of airlines, including Lufthansa, Austrian and SWISS through a range of major gateways, Frankfurt, Munich, Milan, Vienna and Zurich. If the bmi/London connection works too (although the word is that Lufthansa is merely restoring that carrier’s fortunes enough to be able to sell it off) and the Brussels Airlines connection can also work, there is a lot of valuable geographic coverage.

But there is also a lot of management ground to be covered. Undoubtedly this does offer long term advantages, assuming a decent economic recovery, but the big issue is navigating the commercial and political realities in between now and that point in the future.

With plans to reduce Austrian’s costs by 20% and bmi’s by almost as much, this is not going to be an easy path. The heavily unionised airline industry is such that, ironically, as soon as economic conditions improve, unions lose any appetite they may have had for accepting management calls for greater efficiencies.

Nonetheless, the board remains confident that the 2010 result will improve on last year’s EUR130 million profit: “Overall performance to date has further strengthened the executive board’s expectations,” they said yesterday. This optimism was based on “positive demand trends in the cargo and passenger businesses”.

The market was not so convinced however, with Lufthansa shares falling more steeply than the overall shaky, Greek-debt influenced market, down 4.7%. This was still not as bad as its big three competitors, with British Airways shedding 5.3% and Air France-KLM 5.7% - the feeling perhaps being that, if Lufthansa was doing this badly, they must be even worse. And home competitor, airberlin, lost 6.6% of value, for the largest fall in Europe on the day. 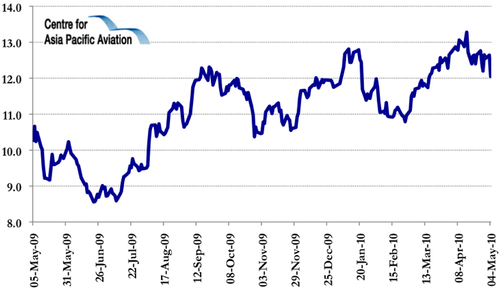 Lufthansa’s stocks have been looking a little shaky in recent weeks. It will need some very good news today if that direction is to be reversed. Airlines are always at the most sensitive end of economic breezes and the brewing storm of Greek, and perhaps Spanish, Portuguese, Irish and other debt inadequacies will not favour them.