Shares in Lufthansa dipped 0.5% yesterday, as the German carrier’s subsidiary, bmi, announced plans for its restructure.

The Lufthansa Group, which took over bmi in Jul-2009, immediately highlighted the need to restructure the business. The carrier now plans to restructure its mainline and regional operations, focusing on maintaining, within bmi mainline and bmi regional, a core network of services in the UK and Ireland, Europe, the CIS, and the Middle East.

Under the plan, bmi will focus on suspending unprofitable routes, adjusting capacity to optimise efficiency and profitability, strengthen organisational productivity and efficiency across all areas, utilise the synergies offered by Lufthansa and other partner airlines and maximise revenue generating opportunities with codeshare and Star Alliance partners. Unprofitable routes reportedly include London Heathrow to Tel Aviv, Kiev, Aleppo, Amsterdam and Brussels from 09-Jan-2009.

Adjusting capacity would result in a reduction of the number of aircraft for mainline operations by nine from the current 39 aircraft. This reduction will include two of five Embraer aircraft operating on mainline routes that will be returned to bmi regional. bmi regional is also currently in talks to reduce its fleet, due to the return of the Embraer aircraft and one additional spare aircraft.

In addition, aircraft leases, which expire in 1H2010, will not be extended, including two A330 aircraft from the current three.

A reduction in the number of aircraft deployed in bmi mainline and bmi regional operations will result in job reductions coming from all areas, including operational and corporate functions. The number of full-time equivalent jobs at risk of redundancy is expected to be approximately 600. However, further job cuts cannot be ruled out, as positions will be cut to reflect the reduced flying programme.

The British AirLine Pilots' Association (BALPA) stated it would enter talks with bmi to limit the number of job cuts.

Shares in Air France-KLM remained virtually flat (+0.1%) yesterday. Air France launch commercial flights between Europe and the US with A380 equipment, on Paris CDG-New York JFK sector. The aircraft is configured with 538 seats in three classes. The carrier has 11 more A380s on order, with three to be delivered by Spring 2010.

Earlier this week, Lufthansa announced the delivery of its first A380 would be delayed by several months to Northern Summer 2010. The carrier, cited “internal delays at Airbus” as responsible for the pushback.

The carrier had been scheduled to take delivery of the first of 15 A380s in Mar-2010. Airbus and Lufthansa have also agreed on a revised delivery schedule for the A380s.

Dart Group (-4.6%) lost ground as profit takers sold, following gains earlier in the week on the back of a good profit result. 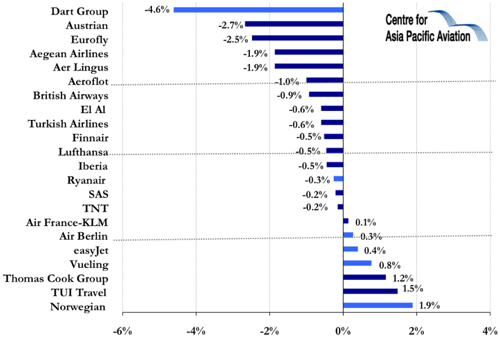