Lufthansa and Condor could reunite the cranes

Lufthansa Group CEO Carsten Spohr has said that it has made a non-binding offer for the German leisure airline Condor Flugdienst, a Thomas Cook Group subsidiary. Lufthansa may also be interested in buying all Thomas Cook Group airlines, which include other subsidiaries in the UK, Scandinavia and Spain's Balearic Islands.

Condor, the biggest Thomas Cook Group airline and the only one with its own brand name, has a long history of ties to Lufthansa (including the historic crane logos). The acquisition of Condor, the number five airline in Germany, would further extend Lufthansa Group's leading seat share.

For Thomas Cook Group the continuity of airline capacity supply to its tour operator business is important, but airline ownership is no longer a strategic imperative. Its airlines have been growing their seat-only and third-party tour operator sales for some years. Moreover, Thomas Cook Airlines Belgium was sold to Brussels Airlines in 2017.

CAPA analysis indicates that Condor's scheduled summer network (which is far bigger than its winter operation) has a significant level of overlap with Lufthansa and Eurowings. Condor's strong leisure focus suggests that it would be plugged into Lufthansa's Eurowings division, although it is still digesting parts of airberlin, and other hurdles could include competition concerns.

Condor is the largest airline in the Thomas Cook Group

Condor is Thomas Cook Group's largest airline, accounting for 48.2% of the group's seat numbers in the week of 2-Sep-2019 and operating 41 aircraft (source: CAPA Fleet Database).

The group's airlines carried a total of 20.2 million passengers in 2018 (year to Sep-2018), ranking the group at number 14 among European airline groups.

Condor has a long history of links with Lufthansa

Condor's origins date back to 1955, when it was founded as Deutsche Flugdienst and was partly owned by Lufthansa, and its 1961 acquisition of rival Condor-Luftreederei.

It has operated a long haul network since 1966 and was the first leisure airline to operate the Boeing 747 in 1971. In 1989 SunExpress was formed as a joint venture between Condor and Turkish Airlines (it is now a JV between Lufthansa and Turkish).

Lufthansa's holding in Condor fluctuated until 2009, when the German flag carrier ended its equity association by selling its final 25% stake to Thomas Cook, which then became the sole shareholder.

Condor's schedule is strongly skewed to the summer

Condor's schedule is highly seasonal, as is typical of strongly leisure focused European airlines. Based on the combination of winter 2018/2019 and summer 2019, 76% of its seats flow in the summer season.

This compares with an average of 63% for the whole European market and 62% for the Lufthansa Group (63% for Eurowings).

This seasonality is also reflected in the variation in the number of routes operated by Condor in winter versus summer. It operated 120 routes last winter (based on schedules data for the week of 4-Mar-2019), compared with 213 summer routes in the week of 2-Sep-2019.

Condor's Middle East and Latin American networks are counter-seasonal, with more routes in the winter than in the summer, but all its other regions have a strong summer bias (see table below).

Condor is the number five airline in Germany

Condor is the fifth largest airline by seats in Germany, after Lufthansa, Eurowings (a Lufthansa subsidiary), Ryanair and easyJet. 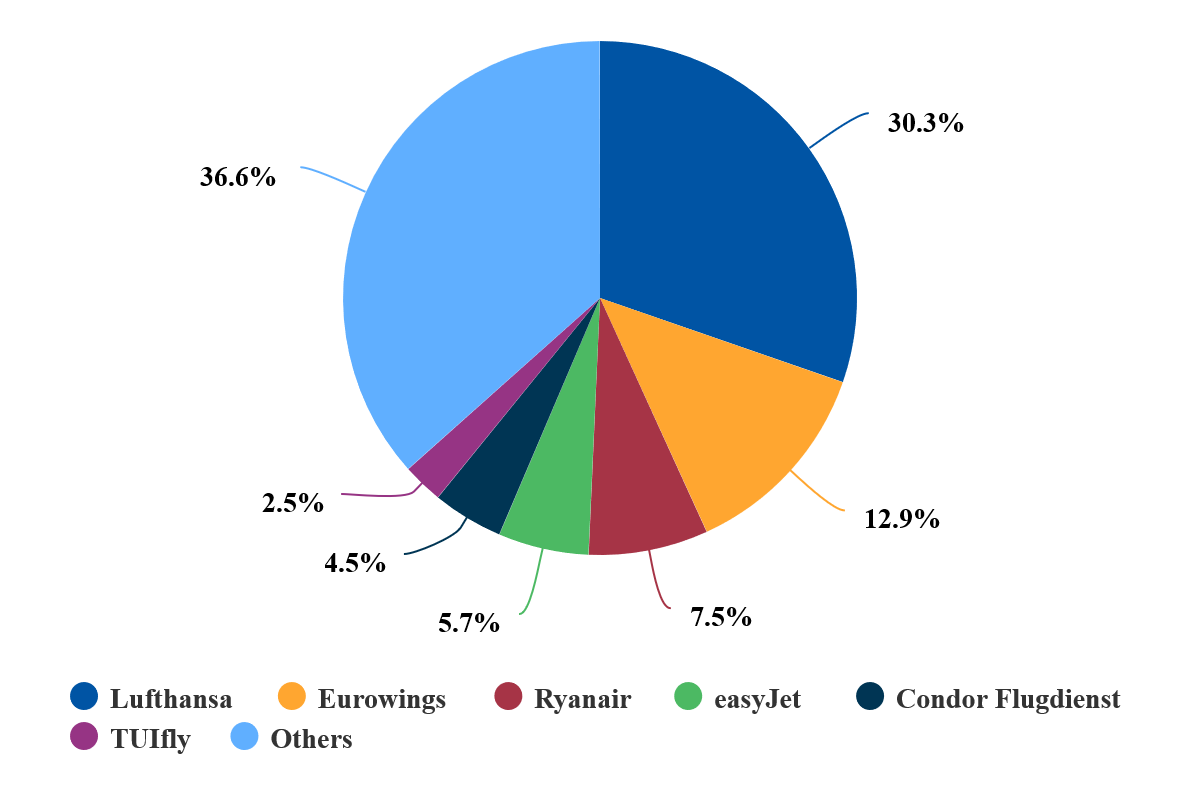 The Lufthansa Group overall has 47.5% of seats in Germany and the addition of Condor would extend this to 52.0%, giving the group more than half of all capacity (week of 2-Sep-2019, source: OAG).

The acquisition would give Lufthansa Group 100% of the market from Germany to the Caribbean and Central America and a dominant share of Germany to Eastern Africa this summer (based on the week of 2-Sep-2019).

On routes between Germany and the Caribbean, Eurowings and Condor are the only two operators, with a near 50/50 split of seat capacity (50.4% for Eurowings and 49.6% for Condor in the week of 2-Sep-2019).

On a European scale, the Lufthansa Group is already the biggest airline group, with 11.1% of seats to/from/within the continent. Ryanair Group is number two, with a seat share of 9.2%.

Condor's principal base is Frankfurt Airport, which is Lufthansa's main hub. Condor has 5.1% of seats at Frankfurt, where it ranks second to Lufthansa, which has 60.2%, and ahead of Ryanair's 3.4% (data source: OAG, week of 2-Sep-2019).

The Lufthansa Group has 63.8% of seats at Frankfurt, where the addition of Condor's share would take the group to 68.9%.

Condor's next two most important bases are Palma de Mallorca (where it is only the sixth biggest airline, with 5.3% of seats) and Duesseldorf (where it is third, with 6.7% of seats), ahead of Munich, Antalya (Turkey) and Hamburg.

According to CAPA analysis of OAG data for the seasonal peak week of 2-Sep-2019, Condor operates 213 airport pairs this summer, compared with 316 operated by Lufthansa and 383 operated by Eurowings.

In combination, 74 Condor routes, 35% of its total, overlap with Lufthansa and/or Eurowings (seven routes are operated by all three: Munich to Catania, Heraklion, Ibiza, Corfu, Lamezia Terme, Olbia and Palma).

Condor Flugdienst: number and percentage of routes overlapping with Lufthansa and Eurowings, week of 2-Sep-2019 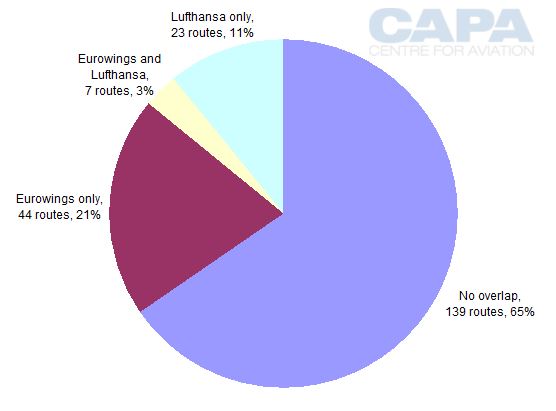 In terms of capacity, 33% of Condor's seats are on Eurowings routes and 19% are on Lufthansa routes.

Overall, 49% of its seats overlap with Lufthansa and/or Eurowings (without double counting its capacity on the seven routes operated by all three).

Condor Flugdienst: percentage of seats overlapping with Lufthansa and Eurowings, week of 2-Sep-2019 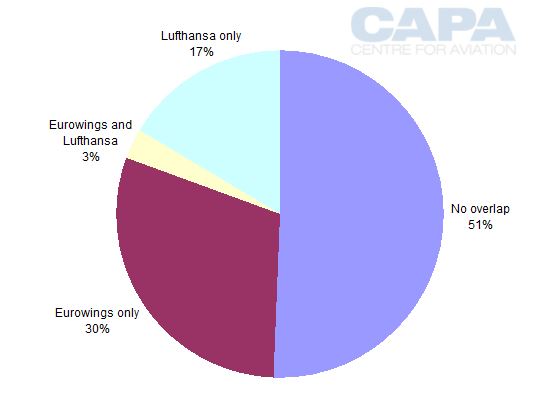 Others may also be interested in Thomas Cook Group airlines

Interest in Thomas Cook Group's airlines was sparked by the group's decision to carry out a strategic review for this part of the business. The investment firm Indigo Partners is also reported to be interested.

In addition, Fosun International, an existing 17% shareholder in the group, is believed to have approached Thomas Cook Group regarding a possible takeover of the group in its entirety.

Lufthansa would most likely integrate Condor into Eurowings, but there are challenges

Lufthansa's interest in Condor is understandable. Intensifying competition in Germany, particularly from LCCs such as Ryanair and easyJet, provides strong motivation for continuing to lead the consolidation process.

The Lufthansa Group has used its Eurowings brand as its main consolidation platform in recent years, the latest example being the integration of significant capacity from the bankrupt airberlin.

However, easyJet also took a big chunk of airberlin, in Berlin, and Ryanair's acquisition of Laudamotion has given it a strong foothold in Vienna in addition to its organic growth in Germany.

If Lufthansa were to acquire Condor, or even all of the Thomas Cook airlines, the most likely outcome is that it would be folded into Eurowings. However, there would be challenges.

Firstly, the acquisition would come quite soon after the airberlin absorption and as Brussels Airlines' integration into Eurowings is still inching forward.

Secondly, Lufthansa would likely want to modernise Condor's fleet and standardise it around Airbus aircraft.

Thirdly, the increased market strength of the Lufthansa Group in Germany could well raise competition concerns, particularly at Frankfurt and on overlapping routes. On this last point, Lufthansa could arguably benefit from any route or slot divestments that result in reduced duplication and resultant cost savings.

In an ideal world, Lufthansa would pause for longer before making another acquisition. However, competitive pressures and the emotional pull of reassembling Germany's flock of cranes may dictate otherwise.