British Airways' service between London Heathrow (LHR) and New York John F Kennedy (JFK) is the world's most lucrative airline revenue route. In the year to Mar-2019, it generated USD1.2 billion – the only route with revenue of more than USD1 billion, according to OAG.

British Airways/American's share is 48.7% and Virgin Atlantic/Delta's share is 28.4%, according to data from OAG. Norwegian's share has grown to 10.0% from a standing start in 2014. The JVs, particularly Virgin/Delta's, have lost share since Norwegian entered, but this is now stabilising. Moreover, Virgin and Delta plan to upgauge on LHR-JFK and to add a JFK service from London Gatwick (LGW), operated by Virgin, in 2020.

Based on OAG data for the week of 2-Sep-2019, London-New York is the world's number two international city pair by seats, after first placed Hong Kong-Taipei.

…and #1 international city pair by ASKs

In summer 2018 Primera Air operated London Stansted to EWR, but this terminated when the Nordic LCC went out of business.

In 2015 and 2016 La Compagnie operated between London Luton and EWR. No other London-New York airport pairs have been flown in recent years.

London to New York: airport pairs by seat share in 2019

LGW-JFK has driven all the growth since 2013

The London-New York market will have increased its annual seat numbers by 8.3% in 2019 compared with 2013, which was the last full year before Norwegian's entry. This is a compound average growth rate of only 1.3% pa (source: CAPA calculations from OAG data).

The growth has been driven by LGW-JFK, the route operated by Norwegian since Jun-2014 and on which BA has also operated since Apr-2016. 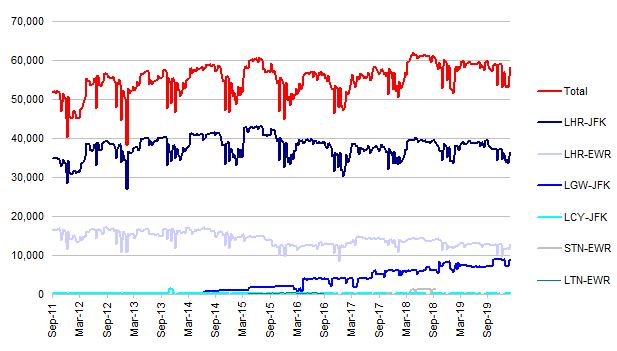 BA and Virgin Atlantic are the two largest LON-NYC airlines

In 2019 there are six airlines operating between New York and London.

The two antitrust-immune joint ventures have 77.1% of seats, with British Airways/American on 48.7% and Virgin Atlantic/Delta on 28.4%. 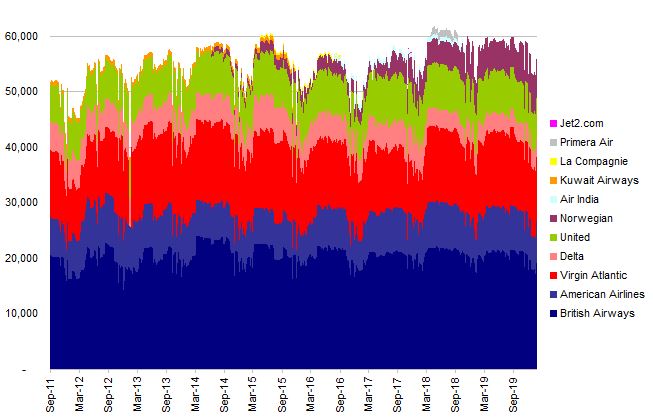 Norwegian has been the leading growth driver since 2013

Since 2013 the 8.3% market growth has been driven mainly by Norwegian. BA and United have also grown, but others have cut capacity during 2013 to 2019. Total capacity excluding Norwegian has fallen by 2.5% (an average annual rate of -0.4%).

Three of the six current operators have shrunk since 2013: American by 2.0%, Virgin by 3.7% and Delta by 32.5%. Fifth freedom operators Kuwait Airways and Air India have left the market, while niche operators La Compagnie, Primera Air and Jet2.com have been and gone.

BA has grown by 4.0% and United has grown by 14.1% in annual seat count since 2013. Norwegian's added capacity is more than the total market increase over the six-year period.

The BA/AA JV has lost 2.8ppts of seat share since 2013, the year before Norwegian entered, and the Virgin/Delta JV's share has dropped by 6.3ppts. The 9.1ppt drop in combined JV seat share almost matches Norwegian's 10.0ppt gain. The difference comes from United's 0.7ppt gain, weighed against a 1.5ppt loss by all other airlines.

In 2019 JV share has stabilised (it is up by 0.5ppts versus 2018). Norwegian's continued increase in seat share this year is taking share from others, in particular as the result of the exit of Air India and Primera Air, but also reflecting a small reduction in United's share. 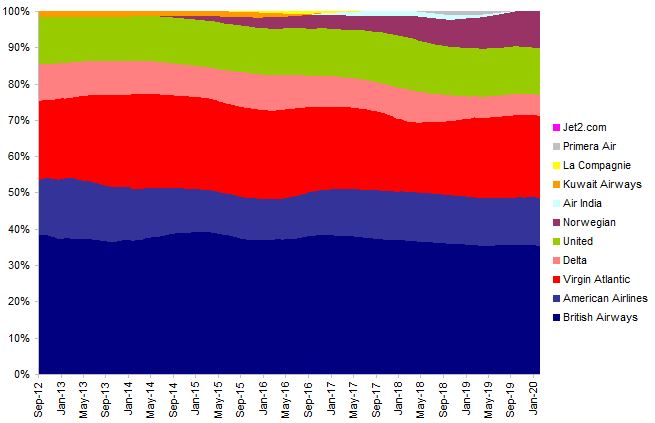 Virgin/Delta's growth in 2019 has helped to bolster seat share in the JVs and this looks set to continue in 2020, when they will add capacity at both LHR and LGW.

This maintains an eight times a day combined schedule. Delta's additional frequency will be its first ever daylight flight on the airport pair.

From May-2020 Virgin will operate a new service from LGW to JFK, deploying A330-200 aircraft, and Delta will return to LGW as an operator with a new 757 Boston service.

Delta launched its first UK service at Gatwick in the 1970s but has not used LGW for many years.

Norwegian has driven LON-NYC growth, but incumbents are content to sit on their money machine

The strength of the London to New York market is firmly built on LHR-JFK and the high yield premium market on this airport pair. The revenue generating capability of BA's LHR-JFK service is a huge asset to the UK's leading airline, while Virgin's number two position in this market helps to underpin its own sometimes fragile financial performance.

Both are strongly supported by their US joint venture partners.

Norwegian's entry into this market in 2014, via the more leisure oriented Gatwick, has changed the landscape and taken some market share away from the leading operators. BA's launch of LGW-JFK in 2016 and Virgin's plans to add this airport pair next year demonstrate its impact.

They may also be sensing Norwegian's increasing struggle for profitability and positioning for its demise if that comes. However, Heathrow's constrained capacity has helped to defend the JVs in their bigger and more profitable premium-led segment and this remains their main focus.

Indeed, after completing a new first class lounge in 2018, BA opened a new business class lounge at JFK earlier this year. In addition, BA and American are to invest USD344 million into JFK's Terminal 8, where they will move to from Terminal 7 in three years' time.

In addition, United, relegated to a bit part player in this market, is to introduce its reconfigured 767-300ER, with more premium seats, on its EWR-LHR service in Sep-2019.

Norwegian may have driven all the growth since 2013, but the incumbents have mostly been quite content to sit on their money machine. At the same time, Norwegian has demonstrated that the London-New York market can be stimulated with low fares.

If Norwegian were to leave the market, expect the leading players to replace it fairly soon, if not with their own operations then with other members of the same group (such as IAG's LEVEL or even Aer Lingus).