Any discussion about the evolution of Latin American aviation ultimately settles on what seem to be insurmountable hurdles of taxation and a general lack of support for the industry by governments in the region. Generally, many governments in Latin America opt for the short view, squeezing fast cash out of airlines for projects that have zero benefit to airlines or aviation in general.

Mexico’s aviation industry is facing potentially serious jeopardy if the front runner in the country’s presidential election scheduled for later this year follows through on plans to nix development of Mexico’s city new airport, which is due to open just two years from now in 2020.

In many ways, for every step forward airlines make in changing the views of Latin American governments on aviation, they take two steps backwards. A proposed new tax on Bogotá’s passengers, and efforts by Brazil’s Congress to reimpose restrictions on ancillary fees, show that much runway remains in convincing Latin Governments that aviation is more than a cash cow to fund pet projects.

The leader in Mexico’s presidential election set for Jul-2018, Andrés Manuel López Obrador, has previously pledged to cancel plans for a new airport under construction to meet demands for current and future passenger throughput.

Chairing a panel at the recent CAPA Americas Summit in Houston, Texas, IATA regional vice president for the Americas Peter Cerdá warned that challenging the need for a new airport “will have tremendous consequences on the country, airlines and the travelling public”. Mexico is Latin America’s second largest aviation market, behind Brazil. 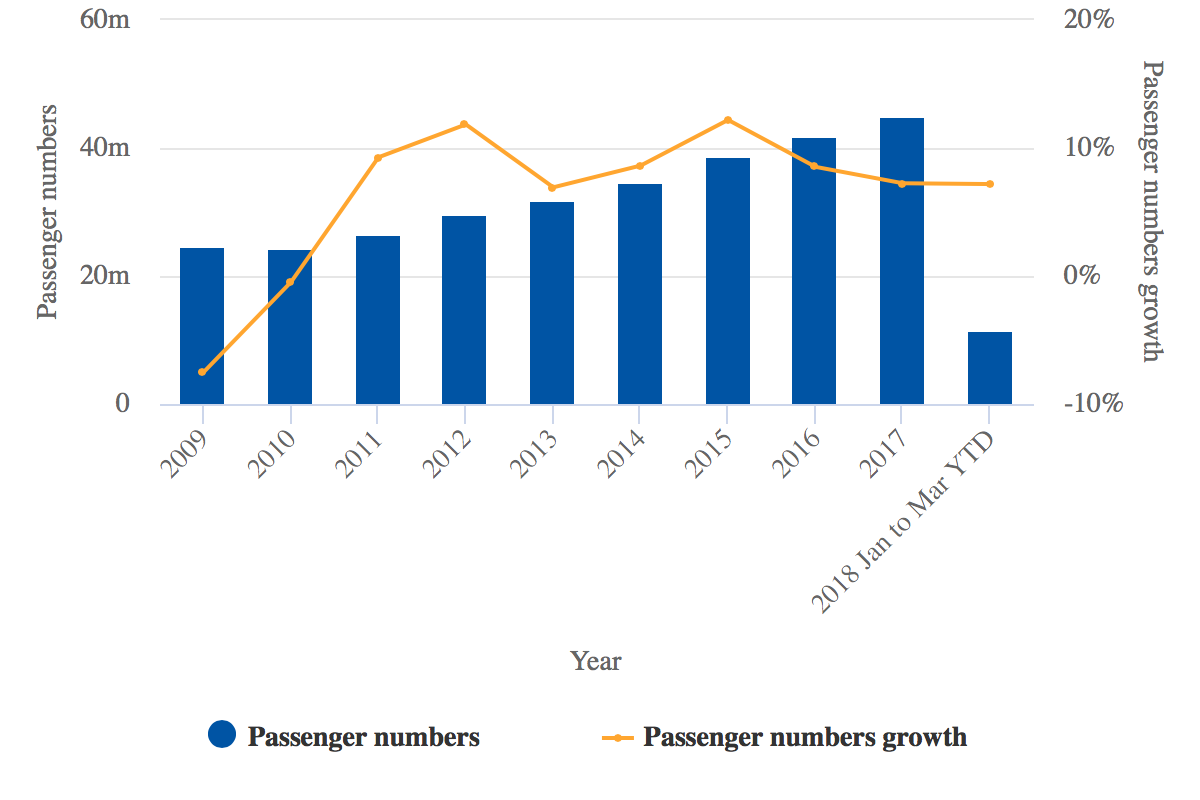 The CEO of the Mexican ULCC Volaris, Enrique Beltranena, explained to attendees that the airport’s construction had taken on a similar profile as the border wall during the 2016 US presidential election. “We need to be careful in how much we believe, and how much we don’t believe, in what they can do”, he stated.

Mr Beltranena remarked that the runways for the new airport are likely to be completed by the end of 2018, and he explained that the airport was being financed through private financing, continuing: "Saying you will stop it means a very important step in going against the financial system of the country".

Approximately 30% of Volaris’ capacity touches Mexico City Juarez, said Mr Beltranena, due to an uncompetitive distribution of slots at the airport.

He remarked that obviously expanding Mexico City is important for Volaris, but 50% of the airline’s order book is pegged for replacement aircraft and 50% is growth. He explained that Volaris can manage without more capacity in Mexico City, but “it is not a nice thing” if the new airport does not go forward.

Southwest Airlines has only been operating internationally for a few years, and most of its routes to Mexico are geared toward the leisure destinations of Cancún, Los Cabos and Puerto Vallarta. The airline operates four daily flights from Houston Hobby to Mexico City Juarez to cater to business travellers on the route, and connections to the rest of its network for corporate customers and the VFR (visiting friends and relatives) market.

Southwest chief revenue officer Andrew Watterson explained to attendees that Mexico has done a good job in managing capacity in leisure markets, noting the opening of a new terminal in Cancún that was on time and on budget.

For now, Southwest is mostly focused on introducing service to Hawaii, but in the medium term additional operations in Mexico City will become important to the airline as its international network matures and its focus on those routes pivots from leisure to business and VFR passenger segments. “If you look at cities where Southwest is strong in the US, there’s either a population there that goes to Mexico on business or to go visiting friends and relatives,” Mr Watterson explained.

ICF Aviation Principal Carlos Ozores remarked that it would be nice if constraints in Mexico City were an isolated case, but “if you look at every single major city Latin America, whether it is São Paulo, Buenos Aires, Lima or Bogotá, the airport systems are constrained”. Those airports are either at capacity or will be in the next few years, he said, noting that at some point that will lead to less capacity, less traffic, fewer passengers and less economic benefit for the countries where those airports are located.

Mr Ozores noted several recent actions taken by governments in Latin America that are detrimental to the region’s aviation industry. During 2017 Brazil allowed airlines to charge for ancillary items such as baggage, but “now there are members in Congress who want to reimpose restrictions on ancillary fees”, he told the summit. In Colombia, “Bogotá’s mayor has proposed a tax to fund the road to [the] airport”, Mr Ozores stated.

Citing an increase in departure fees for Ecuadorian residents and Peru’s passing of a law two years ago that prevents airlines from restricting non-changeable fees, Mr Ozores concluded by saying: “These things are not good for our business. I think the fact is governments realise this is cash in hand very quickly as opposed to thinking about benefits accrued to the next government in place three or four years down the road”.

During 2017 Mexico’s government approved legislation that, among other things, changes free baggage allowances and compensation requirements for delays and cancellations. At the time, IATA warned that Mexico’s government had “approved punitive regulation on consumer protection that goes against international best practice”.

At the Americas Summit Mr Beltranena remarked that “honestly, we have so many things to tackle and so many things to do that we sometimes don’t spend the right amount of time and money to explain what we are doing”.

As an example, he explained that in discussions with Mexico’s Congress during 2017 about including baggage in the legislation, Volaris told legislators that 4.5 out of every 10 of its passengers do not carry a bag. Members of Congress did not realise many of Volaris’ passengers do not need bags, “and what they wanted to do was regulate for themselves, rather than in reality regulate what was happening in the industry”.

Even as Latin America remains one of the most promising markets for aviation worldwide, challenges remain in convincing the region’s governments to look beyond the short term and work with aviation stakeholders to realise the economic benefits that the industry produces when freed from the constraints of burdensome taxes, regulations and infrastructure constraints.

Changing that mindset remains a huge obstacle to overcome.