Two governments – those of Ecuador and Panama – announced in Jul-09 that they would convert military bases into commercial airport facilities. The Ecuadorean government sees the potential for a new regional hub at what was the US military’s narcotics surveillance base at Manta Eloy Alfaro International Airport while in Panama the government is keen to attract European tourists through the disused Howard Air Force base.

Ecuador’s President, Rafael Correa, announced that Manta Eloy Alfaro International Airport, which is currently used by the US Government as a military air base, will be handed over to the Ecuadorean Government on 18-Sep-09. Mr Correa announced plans to commercialise the airport and convert it into a hub for Latin America attracting carriers such as Singapore Airlines, which is reportedly interested in the project.

The decision appears to be rooted in deteriorating relations between the US and Ecuador. The airport has been used by the United States Air Force (USAF) for operations against illegal cocaine trafficking in northwestern South America. Since 1999, the US has stationed up 475 military personnel at Manta, rent-free, flying around 100 missions a month looking for drug-running boats departing from Colombia. The flights account for about 60% of US drug interdiction in the eastern Pacific.

However, President Rafael Correa promised that he would not renew the agreement that allows the United States access to the base when it expires in Nov-09, unless the United States reciprocated by allowing Ecuador to build an air base in Miami, Florida – an unlikely outcome to say the least. Subsequently, Ecuador's Foreign Ministry formally notified the US embassy that the US lease on the base would not be renewed.

The US attempted to persuade Ecuador that hosting the American forces at Manta is of benefit to the country, pointing to the USD71 million the US spent to upgrade the base to a modern airport, the USD6.5 million a year pumped into the local economy and the aid donations that are flown into the base and distributed in the local communities. Having failed to do so, the US announced on 14-Apr-09 that the base would be relocating from Manta to a location somewhere in Colombia, probably the Palanquero air base in Puerto Salgar, as Manta’s replacement. The final anti-narcotics surveillance mission from Manta was flown on 17-Jul-09. 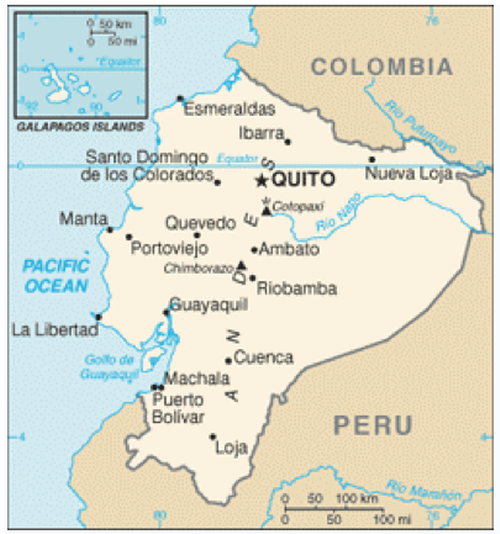 Presently, only three commercial airlines use the base – Aerogal, Icaro Air and TAME – all with a single route to Quito, the capital. But the region has a promising future economically. In Jul-08 President Correa and Venezuela's president, Hugo Chavez (hardly a friend of the US) announced plans to build a USD6 billion oil refinery on the outskirts of Manta. Hong Kong-based Hutchison Port Holdings, which also has airport interests in the Bahamas, has since begun construction of what will be among the largest deep-water ports on the west coast of South America, a USD525 million project with the capacity eventually to handle 1.6 million shipping containers a year at the continent's closest point to Asia. Ecuador’s Security Minister was quoted at the time as stating: "The US stopped being the benchmark of what is good for Latin America. Because Latin America did everything that the US asked it to do and wasn't able to get out of poverty, the North American myth lost political weight."

This despite the US assisting Ecuador's economic development directly through the (USAID) programme in Ecuador and through multilateral organisations such as the Inter-American Development Bank and the World Bank. More than 100 US companies are doing business in Ecuador.

Manta itself is a mid-sized city in Manabi Province; the fifth most populous in the country and, economically, the third most important city of Ecuador. Existing since pre-Colombian times the city of Manta has grown in the last 50 years to almost 200,000 inhabitants. Its main economic activity is tuna fishing. Other economic activities include tourism (it is reputed to have some of South America’s best beaches and the country’s largest seaport regularly attracts cruise ships) and a varied chemical industry. Eloy Alfaro is already used as an international cargo airport. Its single concrete runway is 9383 ft (2860 m).

Quito (the capital’s) airport (Mariscal Sucre) has been operated since 2002 by Quiport Corporacion SA, a 100% privately owned company comprising ADC&HAS Inc., the joint venture of Houston Airport System and Toronto-based Airport Development Corporation, Aecon (US) (45.5%) and Andrade Gutierrez Concessões (Brazil) with a concurrent 35-year concession privately to finance, design, construct and operate the USD570 million green field new international airport at Tababela, 25 km from Quito and at a lower elevation. The new airport is scheduled to open in 2010 and will have capacity for five million passengers per annum.

The success of private sector involvement in the airport sector in Ecuador suggests that the Manta airport might be developed in the same fashion.

Panama’s Howard base to be transformed

Panama is quite different politically to Ecuador, being a ‘friend’ of the US since the dictator Manuel Noriega was disposed with US assistance in 1989.

While Panama’s (US) ‘dollarised’ economy rests primarily on a well-developed services sector that accounts for 80% of GDP, such as operation of the Panama Canal, banking, the Colon Free Zone, insurance, container ports, and flagship registry, tourism remains an important sector for growth because Panama has the second most unequal income distribution in Latin America. Tourism growth would inevitably benefit sections of the population that have been overlooked by the growth in the service sector to date. And while visitors from the Americas are commonplace, there are currently comparatively few from Europe.

Economic growth generally will be bolstered by the Panama Canal expansion project that began in 2007 and is scheduled to be completed by 2014 at a cost of USD5.3 billion - about 25% of current GDP. The expansion project will more than double the Canal's capacity, enabling it to accommodate ships that are now too large to transverse the transoceanic crossway, and should help to reduce the high unemployment rate. 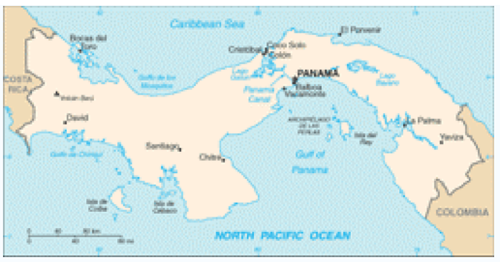 The Howard Air Force Base was closed in Nov-99 as a result of the Torrijos-Carter Treaties, which specified that United States military facilities in the former Panama Canal Zone be closed and the facilities be turned over to the Panamanian government.

The base is located six miles southwest of Balboa, at the southern (Pacific) end of the Panama Canal. Most of the area around it was uninhabited though Panama City could be reached by crossing the nearby Bridge of the Americas. It played an even more significant role for the US than Manta for over 50 years as the citadel of United States air power in Central and South America. It has been a centre for counter-drug operations, also military and humanitarian airlift, contingencies, joint-nation exercises, and search and rescue.

The airport comes with its own ’airport city’ already in place, the government having benefited quickly from the closure of military facilities. Much of the former military base is used to house call centres for technology companies, most notably Dell Computer. It has also been used as a movie set. In Feb-08, the production for the James Bond movie Quantum of Solace used the base to double for an airport in Bolivia.

There are 54 airports with paved runways in total in Panama but apart from Howard, which has a single 8500 ft (2590 m) runway, the only significant airport is that at Tocumen, which serves Panama City (15 miles/25 km). It has a 3,050 m runway - one of two - capable of handling all commercial airline types. Known as ‘the Hub of the Americas’ and the home to one of Latin America’s most successful and respected airlines, Copa, it claims to handle the highest volume of connecting passenger traffic (as a percentage of the whole) in the world. Copa is wholly Panamanian owned.

According to the airport, its passenger traffic grew 6.4% to 1.8 million in the first five months of 2009 in spite of a May drop of 8.6% due to the Swine Flu epidemic. The airport authority is forecasting it will handle 4.8 million passengers in 2009, compared to 4.5 million in 2008.

The airport is owned and operated since 2003 by the corporatised ‘Tocumen SA’, a state owned company. In 1999 a 25-30 year BOT lease was proposed but was withdrawn following the presidential election amidst allegations that privatisations in other sectors had benefited a small number of individuals at the expense of the many. Pre-qualification had attracted many of the big players of the era. A new airport was subsequently planned at Colon but the Howard project seems to have taken precedence.

Connecting traffic will not necessarily benefit Panama’s poor but European tourists arriving into a refurbished Howard airport might. Already a number of northern Europeans have chosen to retire there instead of Spain or France, including the curious case of the Darwins, a British couple in which the husband faked his death in a canoeing accident only to be found living in Panama City five years later, having claimed the insurance money on his ‘untimely death’.