In the US, the Dow (-0.2%) slipped, ending its worst week in approximately a month and a half. The market fell 3.3% for the week on disappointing economic data.

LAN Airlines and TAM to merge

LAN Airlines (+8.6%) and TAM (+4.1%) announced that they have entered into a non-binding MoU that outlines their intentions to combine their holdings under a single parent entity.

The combination would create a new Latin American airline group that would offer passenger and cargo services across the continent and around the world. The new group, to be known as LATAM Airlines Group, would include Lan Airlines and its affiliates in Peru, Argentina and Ecuador; Lan Cargo and its affiliates; TAM Lineas Aereas; TAM Mercosur and all other holdings of LAN and TAM. Each of the airlines in the group would continue to operate under their existing operating certificates and brands.

The combined airline group would provide passenger services to more than 115 destinations in 23 countries while providing cargo services throughout Latin America and across much of the globe. The airlines of the group would operate a fleet of more than 220 aircraft, and employ more than 40,000. In 2009, these carriers had combined revenues of USD8.5 billion, carried more than 45 million passengers and carried combined cargo of 832,000 tons. This would make the carrier the world's 11th largest in terms of passenger traffic and the 15th by revenue. The group would be among the leading airline groups in the world in terms of size, profitability and market reach. The combined airlines would have more than 200 aircraft scheduled for future delivery.

The all-stock transaction would consolidate the economic interests of LAN and TAM under a single parent entity while satisfying the foreign ownership and control requirements of each country where they operate. In connection with the transaction, LAN Airlines would be renamed LATAM Airlines Group SA (LATAM) and would serve as a parent company that will align activities for all group holdings.

LATAM would retain its listing in the Santiago Stock Exchange and its ADR listing in the New York Stock Exchange and plans to list its shares, via BDRs, in the Bovespa in Brazil. The controlling shareholders of LAN and TAM have agreed to a governance model to jointly manage strategic decisions relating to the alignment of the activities of LATAM group holdings. TAM shareholders would be offered 0.90 shares of common stock of LATAM for each share of TAM. TAM's controlling shareholders, Tam Empreendimentos e Participacoes, will reportedly retain control of the Brazilian company with an 80% voting stake and will also own an undisclosed stake in LAN. LAN's controlling shareholders, Costa Verde Aeronautica SA and Inversiones Mineras del Cantabrico will also retain control of the Chilean airline (Reuters/Bloomberg, 13-Aug-2010). Meanwhile, LAN CFO, Alejandro de la Fuente, stated LAN shareholders will own approximately 73% of the combined company and TASM shareholders will hold the rest under terms of a non-binding agreement.

Elsewhere, Alaska Air (+2.0%) was up for the day, on news Los Angeles International Airport plans to commence construction later this year on a USD200 million renovation project for Terminal 6. The project is funded by Alaska Airlines, LAX and the Transportation Security Administration and includes the construction of additional gates, more security lines and a new baggage screening system for Alaska. Construction is due for completion early 2012. 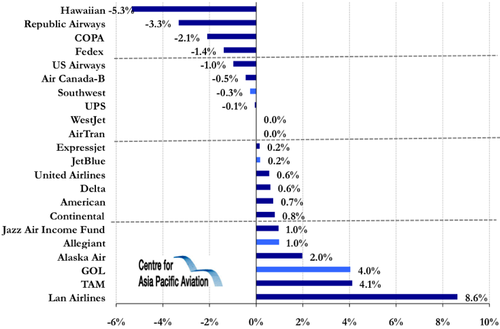