JetBlue Airways reached some solid milestones in its 4Q2013 and FY2013 results, booking its most profitable year in the company’s history, its fifth consecutive profitable year and its highest quarterly operating income.

Those accomplishments are tempered by JetBlue narrowly missing its return targets for FY2013 and an expected rise in unit costs for FY2014 of 3% to 5% driven in large part by increasing labour costs.

As it works to balance those headwinds, Fort Lauderdale continues to be a strategic focus of JetBlue’s network expansion during 2014 as the carrier works steadily towards its goal of reaching 100 daily departures at the South Florida airport. The carrier has also acquired additional slots at Washington National airport, which could expand its offering to 30 daily roundtrip flights from the airport.

The carrier’s top-line expenses rose nearly 9% in 4Q2013 to USD1.2 billion and 9% for FY2013 to USD5 billion. As revenue growth outpaced the rise in expenses in 4Q2013, JetBlue’s aforementioned record operating income for the period was USD115 million, a jump of 164% from the year prior. The carrier also recorded solid 14% growth in its FY2013 operating income to USD428 million. JetBlue’s operating margin for FY2013 was roughly 8%. 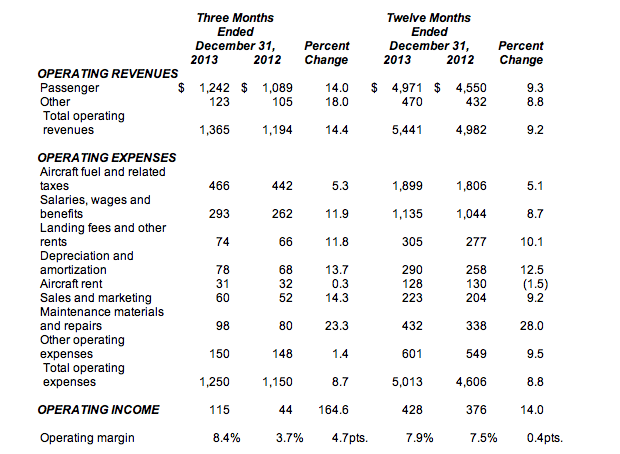 JetBlue assures it will achieve 7% returns in FY2014

Despite JetBlue’s commendable financial results, the carrier did miss its target of increasing its return on invested capital (ROIC) by 1ppt per year. Its ROIC for FY2013 grew from 4.8% to 5.3%. Carrier CEO Dave Barger attributed the shortfall in meeting return targets to lingering effects from “Superstorm Sandy” that struck the US east coast in Oct-2012 and higher than anticipated engine expense on JetBlue’s Embraer E-190 jets. JetBlue estimates those two items negatively impacted its FY2013 operating income by USD50 million.

Mr Barger assured that JetBlue believes it will gain lost ground in its ROIC goals for FY2014 after missing the 1ppt improvement target in FY2012 and FY2013. “We believe our plan this year drives 7%-plus return on invested capital,” said Mr Barger. He believes a maturing route structure, expansion of higher-margin ancillary revenue, partnership expansion and continued growth in Boston and Fort Lauderdale are among the major elements that will lift the company’s returns. Other carriers have also missed their return targets for FY2013. Southwest Airlines touted a 15% ROIC at the beginning of 2013, but ultimately recorded 13% returns. 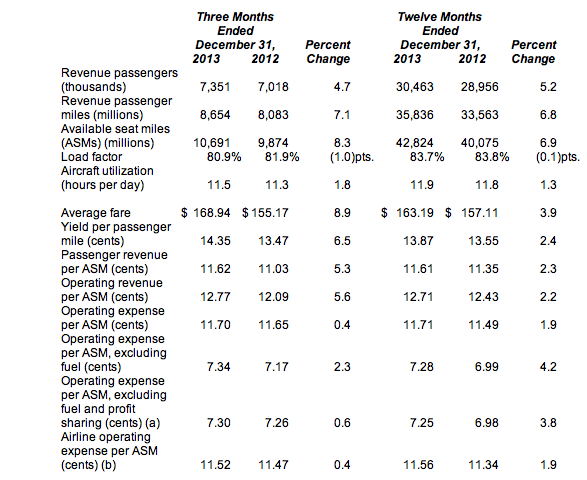 JetBlue’s unit costs excluding fuel and profit sharing were essentially flat year-on-year in 4Q2013 and grew approximately 4% for FY2013. Much of JetBlue’s unit cost pressure during the past couple of years has been driven by maintenance expense; but the culprit for the anticipated 3% to 5% rise in FY2014 is labour costs.

Mr Powers stated that salaries and benefits would account for about 60% of the rise in unit costs for FY2014. The airline recently struck a deal with its pilots that includes a 20% increase on their base rate during the next three years, which equates to USD30 million in 2014, USD50 million in 2015 and USD65 million in 2016. JetBlue also estimates that 3ppt of the unit cost headwind during FY2014 stems from winter storms in Jan-2014 that triggered approximately 1,800 flight cancellations. It expects a USD30 million negative hit from the storms during 1Q2014.

JetBlue plans to focus growth in Florida, the Caribbean and Latin America in 2014

Similar to assessments offered by other US carriers, JetBlue believes the present demand environment is relatively stable. Mr Powers remarked JetBlue was particularly bullish about demand in its Florida, Caribbean and Latin American markets. And despite the bumpy start to 2014 with the storms that caused significant operational disruptions, JetBlue anticipates a 6% to 7% rise in passenger unit revenues for Jan-2014.

JetBlue estimates a capacity increase of 5% to 7% in FY2014, which will be a slight decrease or flat compared to the 7% ASM growth the carrier recorded during FY2013. On a regional basis, JetBlue expects to deploy 30% of its capacity into the Caribbean and Latin America, 30% in Florida, 25% in transcontinental markets and 5% on US east coast short-haul routes.

The carrier plans 15% capacity growth in Fort Lauderdale during FY2014 and a 17% rise in the Caribbean and Latin America. Capacity in the rest of JetBlue’s network will remain essentially flat during 2014.

Fort Lauderdale has become a key launching pad as JetBlue fleshes out its network in the Caribbean and Latin America. As Spirit continues to place less emphasis on Fort Lauderdale, JetBlue sees an opportunity to lower fares in markets and quickly spool up to profitability on new routes.

Mr Powers remarked that JetBlue was pleased with new markets from Fort Lauderdale, which include Bogota and Medellin, Colombia, Lima, Kingston, and San Jose, Costa Rica, “many of which are already exceeding expectations”.

Illustrating the importance of Fort Lauderdale as a gateway to the Caribbean and Latin America, JetBlue president Robin Hayes explained that Fort Lauderdale was JetBlue’s fastest growing market. Based on schedules in OAG for 27-Jan-2014 to 2-Feb-2014, JetBlue accounts for a 19% share of seats deployed from Fort Lauderdale. 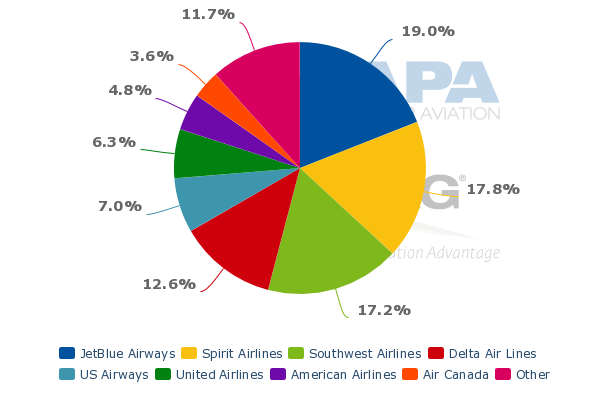 “The important thing to remember is there’s a market there [South Florida] if the fares come down,” Mr Hayes stated. “And I think that’s what we’ve done in Colombia, that’s what we’ve done in Costa Rica and that’s what we’ll continue doing in other markets that we add.” Interestingly, JetBlue also competes in a number of routes from Fort Lauderdale to Latin American with ultra low-cost carrier Spirit Airlines, including San Jose, Lima and Bogota. Based on JetBlue’s commentary it appears that its medium-frills higher-priced service offering compared with Spirit’s bare bones product is gaining traction among cost-conscious travellers looking for a product that falls between ultra low-cost and legacy offerings.

Mr Hayes reiterated previous statements that Fort Lauderdale would grow to 100 flights per day, and during 4Q2013 JetBlue was averaging 60 daily departures from the airport.  “In terms of new routes that we add, we think of about 2/3 international and 1/3 domestic,” said Mr Hayes. “That’s how we’re thinking about that growth. So clearly, we still have a number of markets that we are looking at.”

JetBlue was named the first recipient of slots at Washington National that the new American was forced to divest and sell in order to gain US Justice Department approval for the US Airways-American merger. JetBlue is gaining 12 slot pairs and gaining permanent control of eight slot pairs it has been leasing from American since 2010. JetBlue explained the new slot pairs would be used to launch new service and fortify some existing markets from National that include Boston, Fort Lauderdale, Orlando, Tampa and San Juan, Puerto Rico.

Just before JetBlue revealed it was selected to purchase the slots, Mr Hayes remarked that if the carrier succeeded in gaining a portion of the slot pairs divested by American (Southwest has been awarded 54 slot pairs), the flying “would need to be funded from elsewhere in our network”. Obviously Mr Hayes did not elaborate, but perhaps it is a safe bet that new routes from Fort Lauderdale are not a risk since it seems those routes reach maturity faster than other markets within JetBlue’s network.

Like most US carriers, JetBlue has work underway to clean up its balance sheet and estimates that at YE2013 its adjusted net debt-to-capital ratio was 59%, which the airline estimates is a 2.5ppt improvement from 2012. While JetBlue has recorded consistent favourable financial results, it is using its cash to pare down debt and strengthen its balance sheet, concluding that is in the best interest of the carrier’s shareholders. At the moment that seems like a rational use for its cash, but US airline shareholders and investors in the airline industry have an increasing appetite for rewards as they get whiff of relative industry health. It may be quite some time before JetBlue can discuss tangible shareholder rewards, but it could be a wise move for the carrier to determine and communicate its rewards for the long term to keep shareholders both happy, and loyal.