Jet Naked. Another ULCC for Canada – how will Air Canada and WestJet respond?

Canada is emerging as a breeding ground for proposed ultra low-cost carriers as a second ULCC startup, this one commanded by WestJet’s co-founder, aims to capitalise on the frills for a fee model, joining another aspiring ULCC, Canada Jetlines.

Jet Naked is the latest ultra low-cost airline that wants to establish itself in Canada, the name perhaps a nod to the no-frills experience it aims to engender (and perhaps the sort of ready-made marketing campaigns it will embark on). It is not surprising that Canada has become a hotbed for the ULCC model as WestJet’s cost and model have migrated upward, creating what some see as an opportunity for a true no-frills airline to target passengers priced out of air travel. This mirrors Australia's experience as LCC Virgin Blue went up market and aggressive LCC Tiger Airways entered; the difference there though was that Virgin's main target, Qantas, already had its own LCC subsidiary, thus sandwiching the smaller airline. Virgin has since bought a controlling share in the renamed Tigerair, to balance the market forces.

There are considerable similarities between the Australian and Canadian markets, along with some big differences – like being situated next to the world's biggest aviation market. But, like Qantas and (now-renamed) Virgin Australia, neither Air Canada nor WestJet can afford to look the other way.

The airline is headed by WestJet co-founder Tim Morgan, and other top executives include former Spirit Airlines executive David Lancelot.

There is scant additional information on Jet Naked’s plans, other than a declaration that it intends to attract Canadians that presently cannot afford to travel frequently by air, with a no frills approach that entails charging for essentially every aspect of the travel experience outside the ticket price. The implication: to allow ultra-low ticket prices.

Jet Naked’s planned entry follows plans by another upstart, Canada Jetlines, to adopt the same business model. Executives at Jetlines have determined that Canada’s two largest airlines Air Canada and WestJet have made a dive to the middle, which has essentially created some passenger confusion about each airline’s respective product offering.

During the past couple of years WestJet has created a premium economy, developed product bundles, changed its loyalty programme and added more desirable markets for business travellers in an effort to enlarge its share of corporate passengers in Canada.

Air Canada, meanwhile, has dedicated significant effort during the past year to the spool-up of its new low-cost regional subsidiary rouge. The new airline’s lower cost structure allows Air Canada to charge lower fares on higher volume leisure routes to the Caribbean, US and Europe.

The theory posed by Canada Jetlines that each airline’s product positioning may generate customer confusion was recently illustrated on a small scale after Canada’s Transportation Agency opted to launch an investigation into nine complaints from passengers booking tickets on Air Canada, but were switched to rouge at the time of travel.

The opening created for other airlines from strategy shifts at Air Canada and WestJet is hard to define. WestJet also maintains that it remains Canada’s low-fare airline, and has dismissed the notion that any opportunity exists for the new breed of ultra low-cost carrier to attempt to make inroads within Canada.

Generally, air fares in Canada have remained stable, growing just 0.8% from CY2011 to CY2012 (the latest data available from the government) to CAD192. Based on data from CAPA and OAG, Canada’s low-cost seat penetration of 31% for the period spanning Jan-2014 to Jun-2014 was the same as the United States’ penetration of 31%. 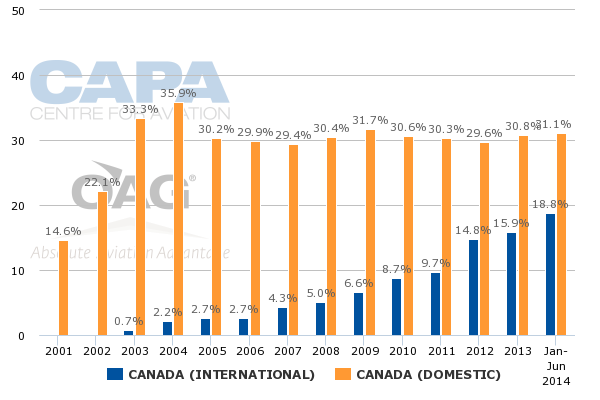 For the moment Canada’s economy remains fragile, which may not bode well for airlines targeting more price sensitive travellers who may want to delay discretionary spend until signs of a more robust recovery materialise.

Canada’s GDP growth is forecast at just over 2% from CY2014 to CY2019, and inflation is projected at similar levels for the same time period. 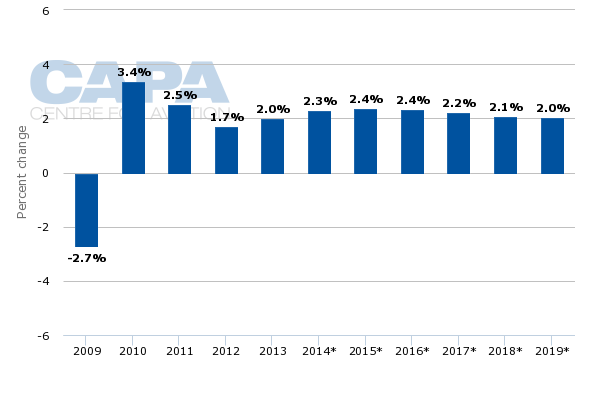 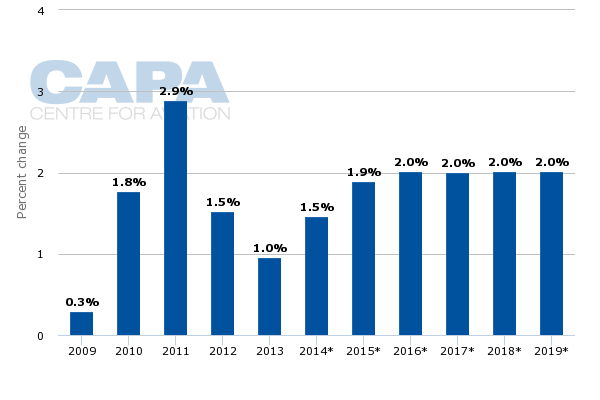 Both Jetlines and Jet Naked are basing their businesses on the premise of enticing Canadian travellers from auto to air travel. But a recent report by the Royal Bank of Canada shows that nominal retails sales in Canada increased 1.1% year-on-year in Apr-2014 driven by a 2.4% rise in motor vehicle sales. Absent the sale of autos, retail sales in Canada increased 0.7% in Apr-2014. Those figures might indicate that Canadians are not rushing to abandon their travels by car.

Fares in Canada do not appear to be rising at a rapid rate, reflected by tepid yield growth

As previously reported by CAPA, the Canadian market place logically seems like a breeding ground for ULCCs. With so much attention generated by Spirit Airlines in the US, and Frontier’s aspirations to complete its formal ULCC transition, it was only a matter of time before the business model would emerge across the border.

CAPA and OAG data show that for the week of 29-Jun-2014 to 5-Jul-2014 Air Canada and WestJet combined represent nearly 84% of the seats deployed on domestic routes in Canada. Both airlines are also showing robust traffic growth in 2014, reflected in WestJet’s 6% traffic growth for the first five months of the year and Air Canada's 5.6% increase. 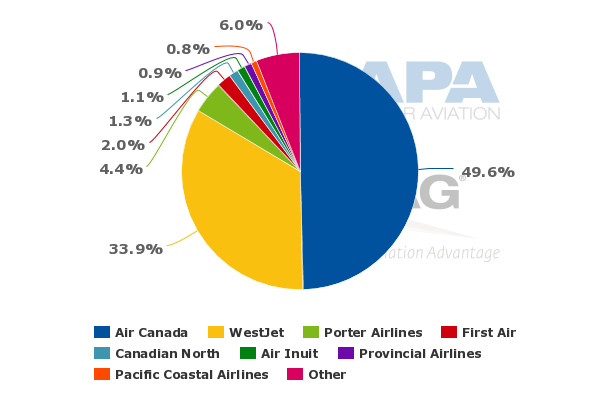 Canada Jetlines has argued that even as some of the changes achieved by Air Canada and WestJet are creating cost benefits for those airlines, each company is either increasing fares or maintaining current pricing levels.

Presently, Air Canada is seeing more of a cost benefit from its initiatives, including rouge, as the airline predicts a unit cost decline excluding fuel of 3% to 4%. But the airline’s yields in CY2013 remained essentially flat, and even as demand remains solid, there does not appear to be a huge opportunity for pricing traction for either of Canada’s largest airlines.

WestJet’s yields were also flat in CY2013, and it faces a unit cost increase in CY2014 of 1.5% to 2.5%. Even as fares remain steady, given each airline’s traffic growth, it is not a certainty that a large number of Canadians are being priced out of air travel.

Both new upstarts believe they can lower existing fares significantly

Obviously both Canada Jetlines and Jet Naked are creating cost structures to allow them to offer significantly lower base fares than either Air Canada or WestJet. Jetlines believes it can get its baseline costs low enough to offer those stimulative fares – even with Canada’s typically higher airport operating costs.

Jetlines is apparently further down the road in its development as it aims to launch service in late 2014 or early 2015. Both Jetlines and Jet Naked have claimed they will offer fares 60% below Air Canada and WestJet in certain markets, which is an easy claim to make prior to launching operations. Necessarily the first hurdle however will be to attract substantial investors. Each group has well-credentialled executives behind their propositions, which should help with the entry process. But the incumbents have substantial market power and the ability to respond selectively and aggressively to new entry.

WestJet and Air Canada would need to respond to ULCC competition

Given current market and economic conditions, it will be challenging for either of the proposed airlines to be a significant disruptor in the short term. Fuel is expensive, and more proportionately so as other cost items are pared; and the weaker Canadian dollar magnifies fuel and USD-denominated lease costs.

If Jetlines and Jet Naked actually materialise into fully operational carriers, their overall share of Canada’s capacity will be small at first. That said, no incumbent is likely to sit by idly and watch even the smallest operator gain the opportunity to evolve quickly into something bigger. As Qantas quickly discovered following the entry of LCC Virgin Blue in 2000, market power was insufficient to prevail in an essentially point to point domestic market where a competitor's costs were 40% lower. As Virgin's percentage market share quickly grew beyond the 20s, Qantas was eventually obliged to establish its own LCC subsidiary, Jetstar, to stem the bloodletting.

Although highly successful in the market, the Jetstar move has never been popular with status quo focussed unions and, even if Air Canada wished at some time to emulate the Qantas move, it would face a much greater battery of opposition. WestJet will be well aware of the issues; among its board members is Brett Godfrey, founder and long term CEO of Virgin Blue, but it too is vulnerable as it transitions into a new profile.

Even the threat of entry is unwelcome to incumbents; and the popular perception of high fares once a low priced product is in the market can only too easily create expectations of widespread price reductions, with near-irrestible downward pressures. These can flow well beyond the immediately affected routes – even before the new entrants are flying.

Assuming a cost differential of around 30% or even more for the proposed ULCCs, it is too dangerous to allow them to gain a foothold – and if either or both is able to establish a solid investment base to tide them through the inevitable early setbacks, the threat increases.

So, while Air Canada and WestJet will not willingly cede the discretionary travel market to a new crop of ULCCs, the threat comes at a time when they are more vulnerable than usual. As each has focussed recently on other matters – Air Canada on resolving longstanding pension issues and establishing a lower cost international product, and WestJet on developing regional airline feed, a more attractive corporate product and looking to spread internationally, so each has inevitably lost a bit of edge on domestic cost containment.

Each carrier will need to ensure it has ample feed to make its growing international network viable, and with their respective network breadth may be able selectively to match lower domestic fares in the short term to maintain their market shares. (Canada's Competition Bureau would be alert to any practices that offend national competition laws, but these tend to be extremely difficult to enforce and, where they are applied, to be more about forensic discussion than prevention.)

Whatever the outcome of efforts by Jetlines and Jet Naked to carve out a new niche in the market place, neither upstart is guaranteed a home run – but equally Air Canada and WestJet cannot ignore the prospect they may face a whole new ballgame.