Canadian start-up carrier Canada Jetlines believes a “dive to the middle” by the country’s two largest carriers Air Canada and WestJet has created an opportunity for the pure-play ultra low-cost business model to manifest itself in Canada as fares continue to climb.

The new carrier’s thesis is it can stimulate traffic by offering lower fares to passengers that would otherwise travel by car and adopt the ultra low-cost carrier strategy of extreme unbundling – charging for nearly every aspect of travel outside of a seat. It is a strategy that has worked for Spirit Airlines in the larger US market.

It is not a certainty the ULCC model can be easily replicated in Canada; but if Canada Jetlines does ultimately become airborne perhaps the carrier to feel most of the heat is WestJet, an airline that is moving up market, but still has significant dependence on cost-conscious leisure travellers.

Plans by Canada Jetlines to develop and launch an ultra low-cost carrier in Canada first emerged in late 2013. Three Vancouver-based businessmen declared their intent to create a new airline based in the city and operate Airbus narrowbodies with low base fares. Passengers would pay for other services, which at one point included an onboard nanny.

Mr Young and the other members of Canada Jetlines’ management team, which includes Jim Scott as chief executive officer, have concluded that Air Canada and WestJet are making a “dive to the middle”, creating confusion among passengers, but an opportunity for a more pure low-cost carrier in the market place.

Referencing WestJet’s strategy to move up-market Mr Young concluded during the recent CAPA Airlines in Transition conference in Dublin: “You have one carrier moving up the service curve, introducing a plus seat in an all-coach cabin...then we have another carrier introducing a fleet within a fleet, [referring to Air Canada rouge], a carrier within a carrier and densifying their aircraft and diving down to the middle”.

The changing strategies by Air Canada and WestJet are “creating confusion in the market place and I think that confusion as well as the complexity that is created within the carriers themselves will yield probably not the same returns they were hoping they would get by doing those activities”, said Mr Young.

WestJet’s introduction of its premium economy offering, that included new fare bundles debuted in 2013 and the launch of its Encore regional subsidiary that operates Bombardier Q400s, did create some yield pressure for the carrier during 2013. Its yields for the year were essentially flat compared with 2012, and dropped 1% for the 9M ending in Sep-2013. WestJet’s unit revenues fell 1.6% in CY2013.

As the lines between Air Canada and WestJet’s offerings become more blurred, Mr Young concluded that overall fares in the Canadian market place are not decreasing. The country’s two largest carriers are either maintaining current fare levels or increasing their prices. “They’re introducing cost-savings for themselves” and not passing them on to consumers, said Mr Young.

The latest data available from the Canadian Government show that average domestic fares in Canada increased 0.8% year-on-year in 2012, with Saskatoon and Edmonton showing the largest increases of 6.3% and 4.6%, respectively. Mr Young estimated that presently fares within Canada are more than CAD62 cents per mile, and Canada Jetlines plans to “come in under that, take customers out of the cars and grow the market”. 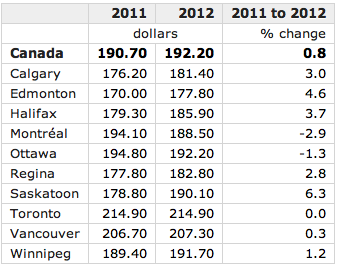 Interestingly, WestJet is attempting to still retain its appeal with cost-conscious customers that would otherwise travel by car with its three-tier fare bundle offering that features Econo, Flex and Plus. The Econo option in theory offers passengers a low base fare and then add-ons for an extra fee. The higher-fare buckets target business passengers willing to pay more for flexibility including itinerary changes and extra legroom.

Obviously WestJet feels that it has the cost-conscious segment of the Canadian market place amply covered, and that, “they [Canada Jetlines] clearly see an opportunity I don’t,” WestJet CEO Gregg Saretsky recently told Canadian news outlet The Financial Post. “We are Canada’s low fare airline and we’re going to compete vigorously as we always have.”

The WestJet pledging robust competition against Canada Jetlines is different from the carrier that embarked on a business model transition into a hybrid carrier a few years ago. While its unit costs excluding fuel and profit sharing fell 0.7% year-on-year in 2013, WestJet has warned that its unit costs during 2014 are forecast to increase 1.5% to 2.5% year-on-year, and it is unlikely that the carrier can achieve unit costs excluding fuel of CAD8.29 cents. WestJet attained those cost levels in 2008 just as it was creating new initiatives to attract a higher share of corporate travellers and contemplating entering the regional market place.

Over the long term WestJet believes its change in business strategy to attract more high-yielding revenue will pay off, and ultimately it will strike the right equilibrium between cost and revenue. That would be challenging under the best of circumstances, but with an upstart that can charge lower fares nibbling at its leisure passenger base, WestJet has an added challenge in executing its business transformation. Air Canada will also feel some pressure from Canada Jetlines, but with a broader international network and arguably still a higher level of corporate traffic, Air Canada may be a bit more shielded from Canada Jetlines’ encroachment.

Can an ULCC flourish in Canada’s high-cost environment?

Air Canada and WestJet frequently note that their unit costs are inherently higher than US airlines given the cost of doing business in Canada stemming from certain government policies. WestJet recently estimated that it cost an extra cent per ASM to operate in Canada compared to the US.

Queried by CAPA if an ULCC could flourish in Canada under those circumstances, Mr Young said the various taxes and fees such as Nav Canada charges are baked into its costs estimates, which could get as low as CAD6 cents by the carrier’s fourth year of operations.

A major advantage cited by Mr Young is Canada Jetlines’ ability to start with a clean-sheet design, which will ultimately be a factor in its ability to undercut current fares in the market. Previously the company has estimated fares 25% to 40% lower than Air Canada and WestJet on transborder international flights and service in large markets. In secondary markets, its fares could be 60% lower.

Until an official launch, Canada Jetlines remains a threat in words only

At the moment Canada Jetlines is only a threat on paper. Mr Young anticipates a late 2014 or early 2015 launch as the airline works to gain all the necessary regulatory approvals for launch.

The Canadian market place seems like a good fit for an ultra low-cost carrier given its duopoly status – Air Canada and WestJet combined represent roughly 80% of the seats on offer in the domestic market place. 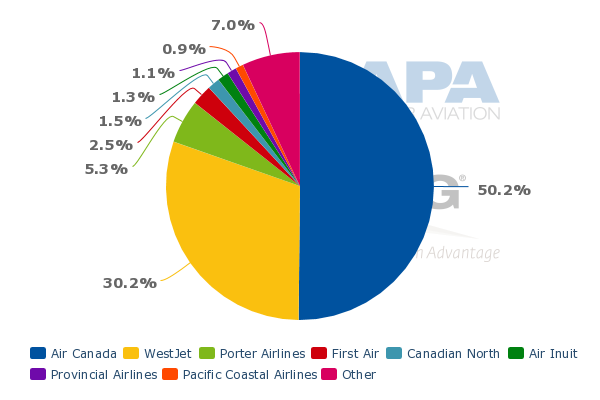 While it seems Canada is ripe for an opportunistic low-cost carrier, the country’s population of 36 million inhabitants is projected to remain essentially flat during the next few years. Canada’s smaller population base (the US has a population of approximately 319 million) could result in fewer stimulation opportunities than in other regions of the world. The Canadian economy is also somewhat tenuous, which could affect the spend of the consumers Canada Jetlines is targeting.

All of those factors combined with the threat of much larger competitors willing to flex their competitive muscle create interesting dynamics for Canada Jetlines. If it officially launches operations, its strategy of capitalising on traffic stimulation to create a new-breed ULCC in the Canadian market place will be put to the test. For Canada Jetlines to achieve success, the country’s residents not only have to get out of their cars, but pull out their wallets too.